keyboard_arrow_uptop
Baseball Prospectus Needs Your Help! Check out our call for contributors!
Subscribe to Baseball Prospectus
An English teacher once gave us a writing assignment: Describe the taste of the best chocolate you ever had, to somebody who has never had chocolate. Without the self-referential crutch (“It tastes like chocolate, but, like, really chocolaty”), how do you convey what makes chocolate good?

Kershaw’s tougher. He’s a lefty starter without a changeup, which we’re conditioned to believe is as useful in the majors as a car without brakes. He throws hard, but not unusually hard—46 starters have thrown an average fastball faster than his in 2016, including Colin Rea, Shelby Miller, Wily Peralta, Chris Bassitt, Martin Perez. The curveball, oh yeah, the curveball, but he only throws it 15 percent of the time—and in past years, he has won the Cy Young award while throwing it as little as 5 percent of the time. Rich Hill is throwing his on half of all pitches these days. The slider’s a perfect pitch, but really, when’s the last time you saw a GIF of it?

It must, then, be his control and command. Which, you would explain to the person who’s never had Kershawcolate, means that he doesn’t walk batters (true!) and doesn’t miss in the fat part of the plate (must be true!), resulting in so few hard hit balls. Gang, we’re almost out of the intro. We're coming to the point! Here’s the point:

I always assumed what made Kershaw so great was that he avoided the middle of the strike zone. To some degree, I still assume this is true. But if we’re talking about the very, very, very middle of the strike zone—what PITCHf/x labels “Zone 12”—Kershaw actually throws roughly as many pitches as everybody else. For instance, a bunch of names I pulled out of thin air with little thought at all, and what percent of their pitches since the start of 2015 have been in Zone 12:

So, he’s normal. He misses, and he misses right where baseballs get hammered. But then there’s this:

(Quick caveat: "Zone 12" is an imprecise way of getting at what we're getting at. Among other things, the strike zone is a social construct, and Zone 12 is a totally separate social construct. But for ease of message and lowness of stakes, we're rolling with Zone 12 today. Hold on.)

What makes Kershaw great isn’t that he misses the middle of the zone*, but that when he throws it right down the middle they still don’t hit it. Even when he misses, he’s like the world’s toughest tee.

So, with now what could honestly be described as two intros out of the way, the real point of this exercise: When Clayton Kershaw Misses, How Does He Miss And Why Don’t They Hit It, the first in what I expect will turn into a series looking at the pitches that Kershaw gets away with because he’s Kershaw but that you certainly would never get away with because you never really applied yourself. Part One, which is also Month One, covering all of his starts through May 1st, is a general survey of what we're even talking about.

Kershaw has thrown 28 pitches in Zone 12 this season. Twenty-eight "mistakes." 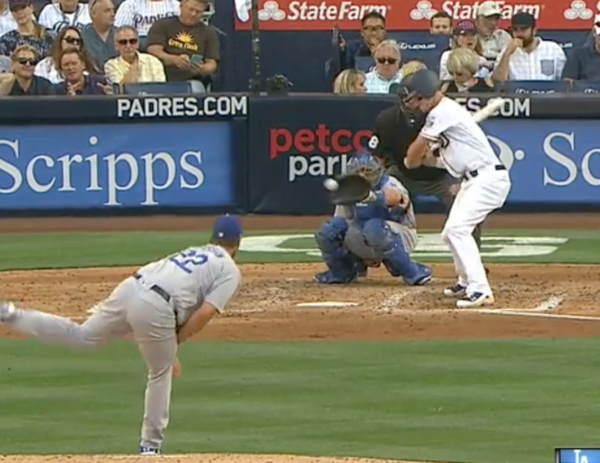 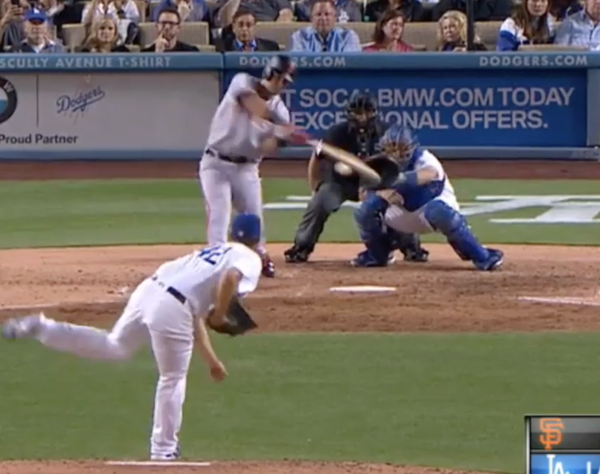 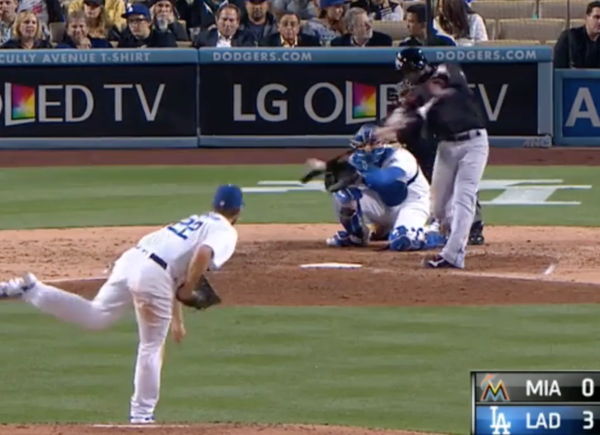 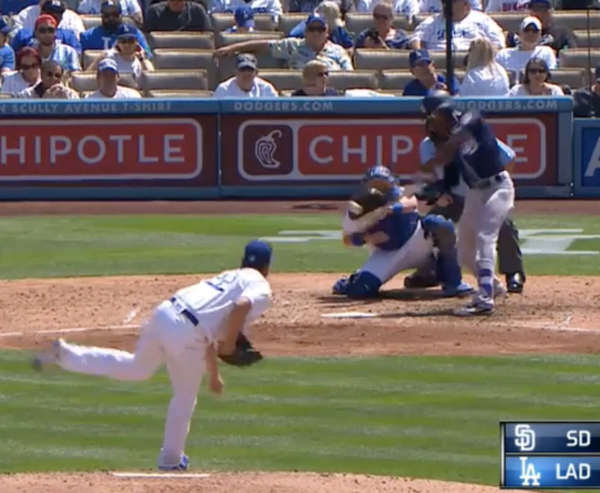 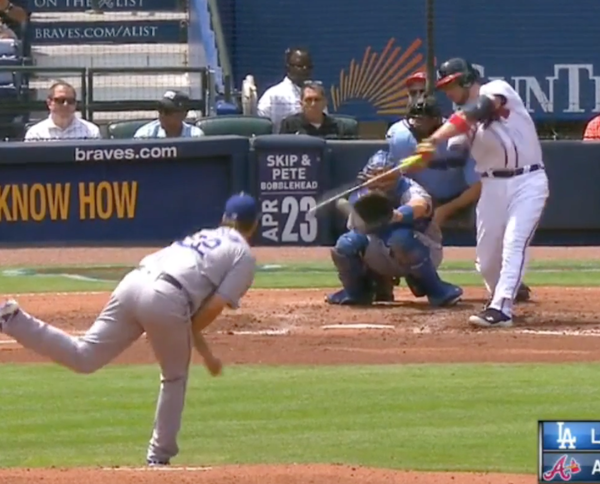 These days, Kershaw actually throws fastballs for 52 percent of his pitches, sliders for 31 percent, curves for 16 percent, so we can say his breaking pitches (especially the slider) are underrepresented, which seems like a good thing. Just not by all that much. Three fewer Zone 12 sliders than we might expect. That’s good, because what little damage hitters do on Zone 12 Kershaw pitches has tended to come on sliders: a .667 slugging percentage against, and just a 13 percent whiff/swing rate, since 2015. By the way, so many sample-size caveats in this piece, including retroactively for all the things I’ve already said. 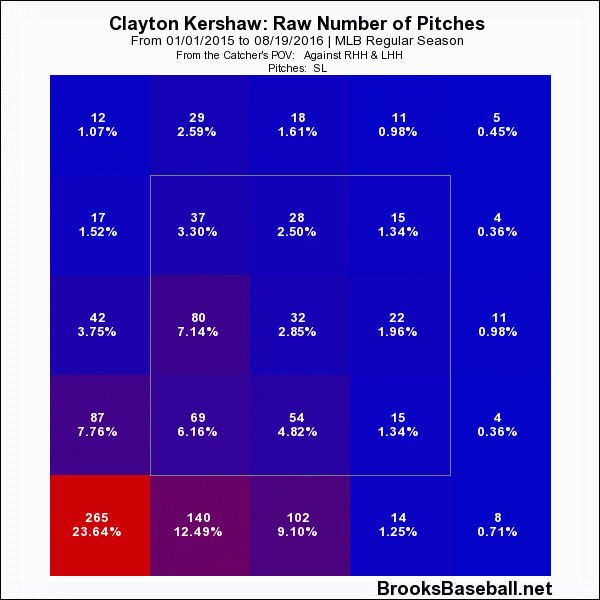 However, over the past two years Kershaw has been more likely to elevate it to steal a strike, as you can see by the difference in his locations with no strikes (left) compared to with two strikes (right). 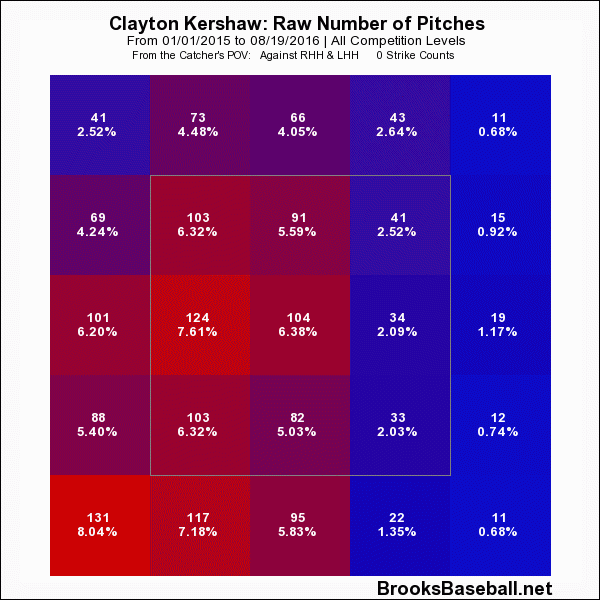 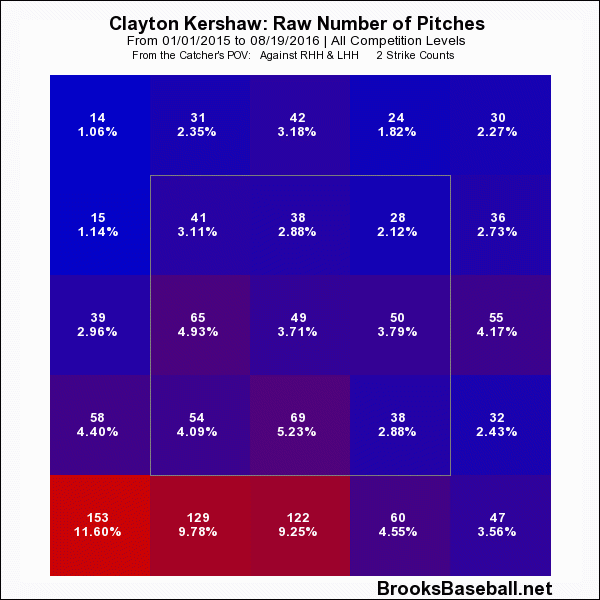 Guess what those pictures tell you is to never assume Kershaw made a mistake, just because it's a high slider. The five sliders he threw in Zone 12 during this season’s first month came on 0-0, 1-2, 0-1, 1-2 and 1-0. They were all a little harder than his usual slider, which is 88.2 mph. They weren't great pitches. This one was especially not a great pitch:

These five resulted in, in order, a called strike, a single, a lineout, a swinging strike and a foul ball. 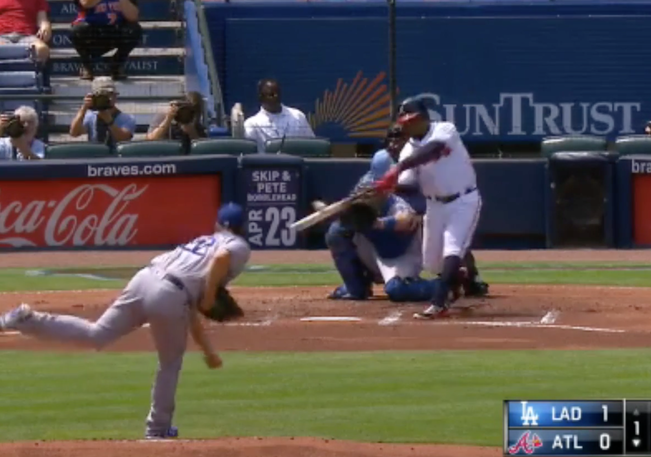 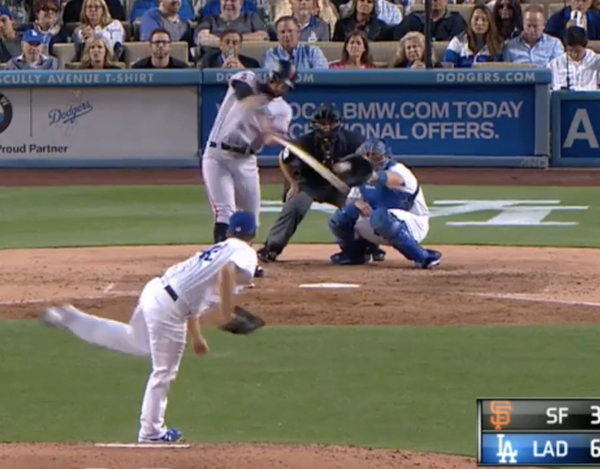 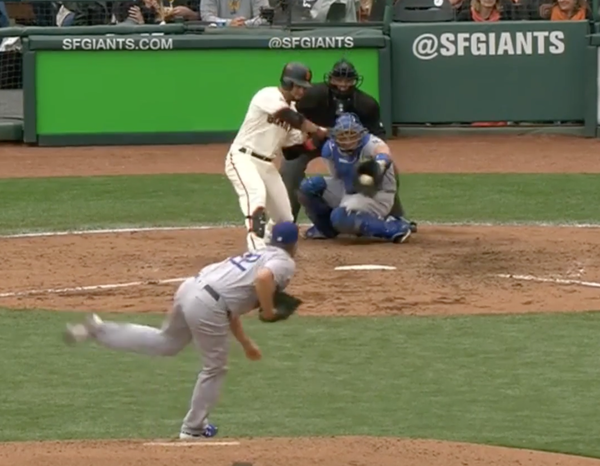 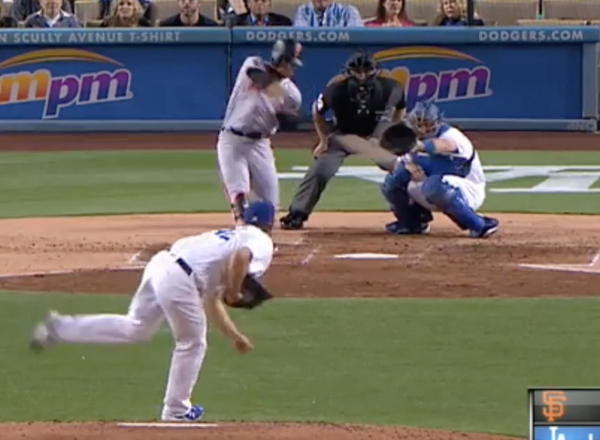 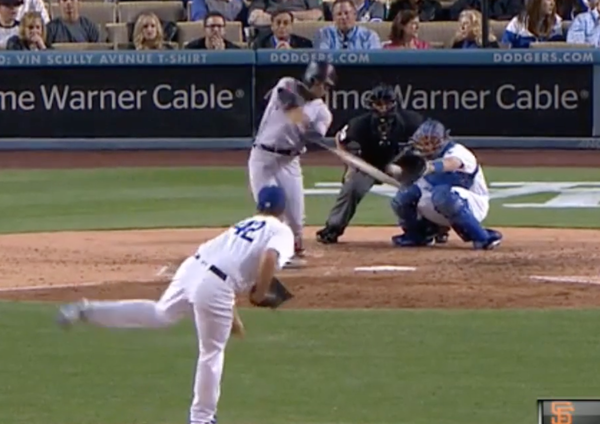 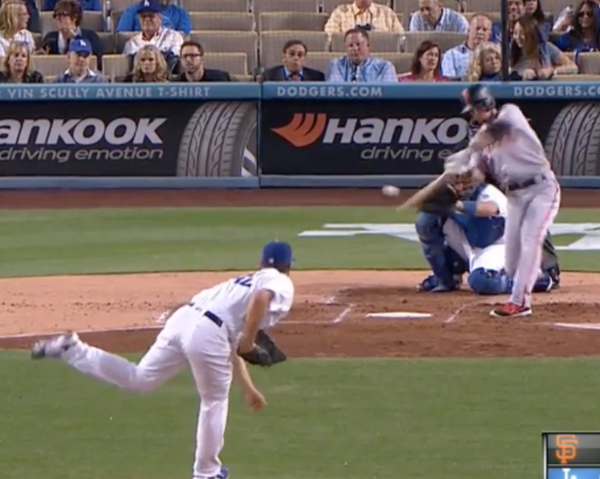 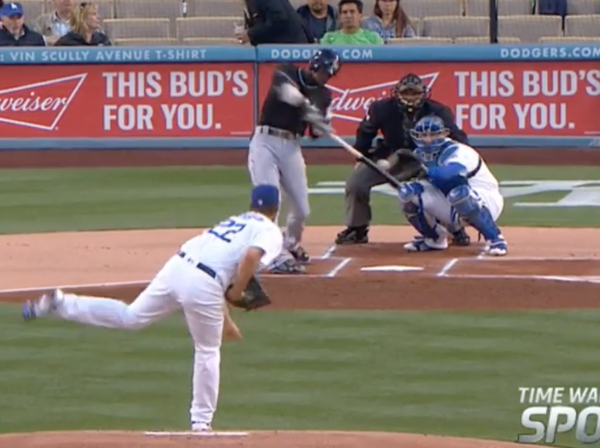 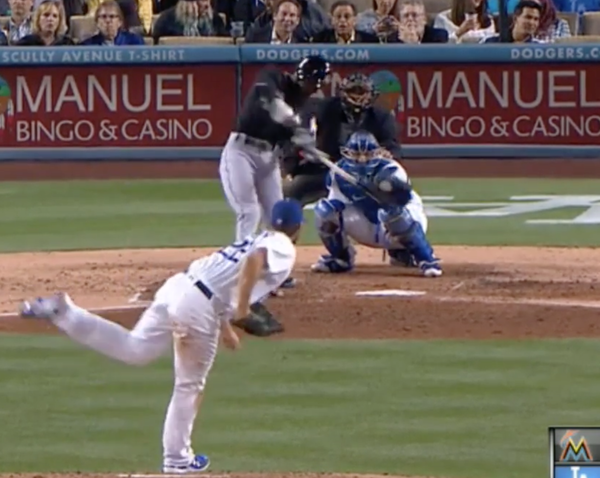 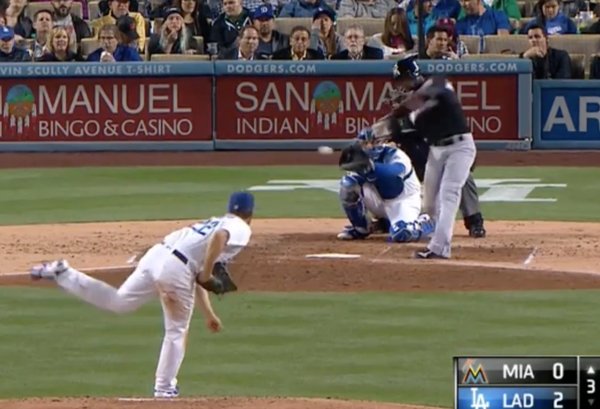 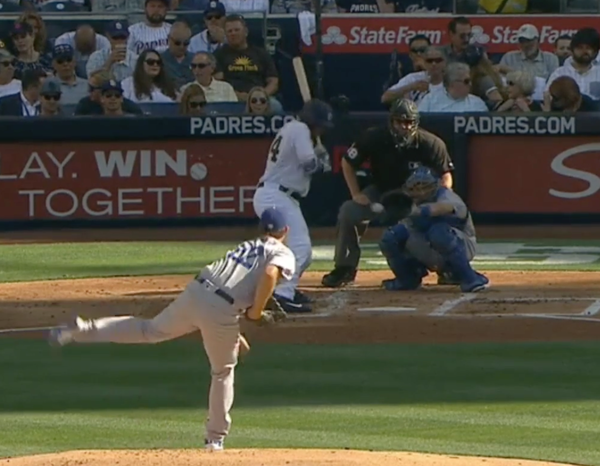 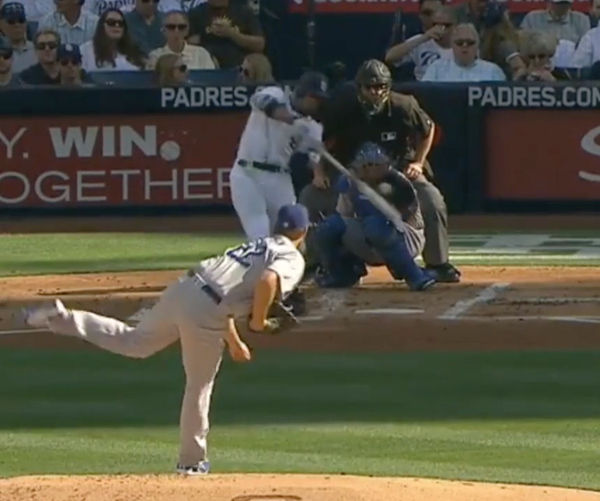 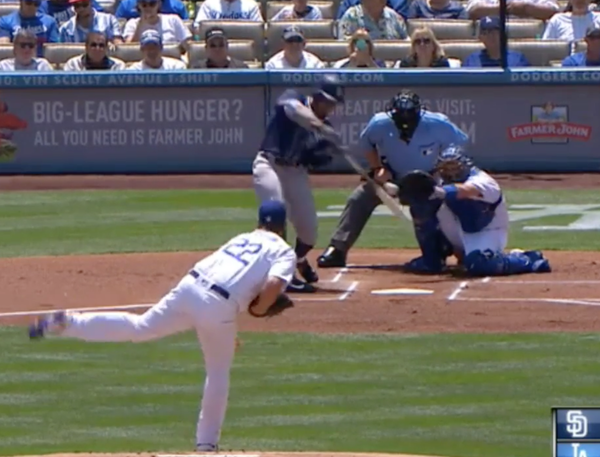 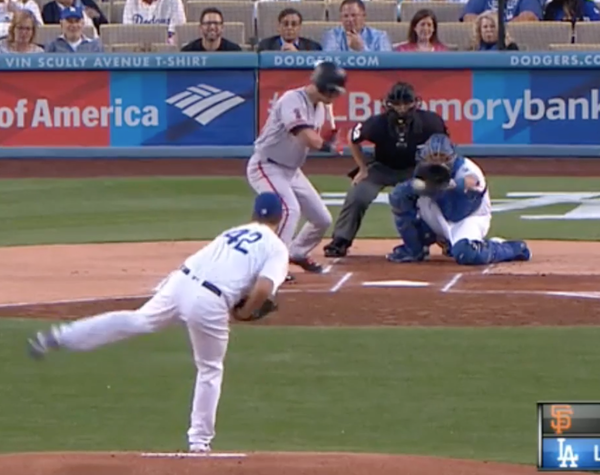 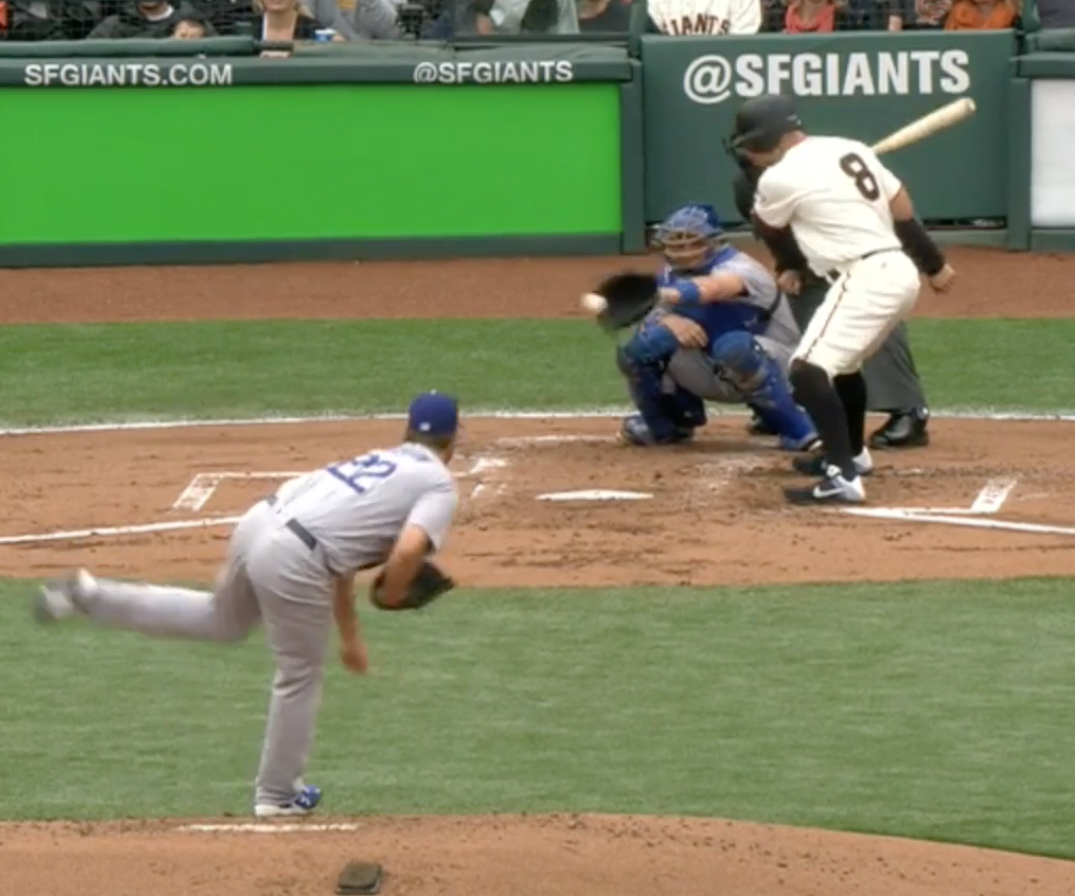 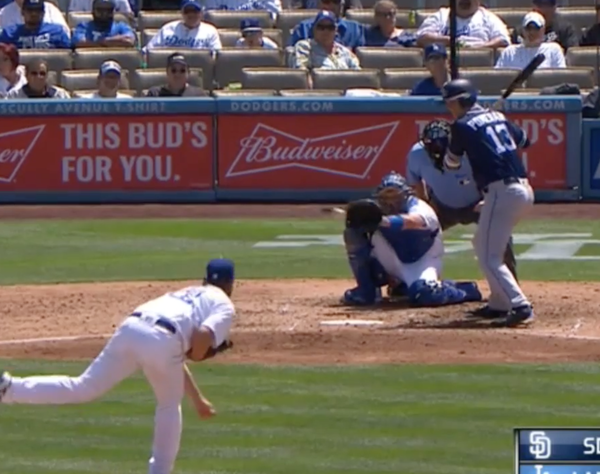 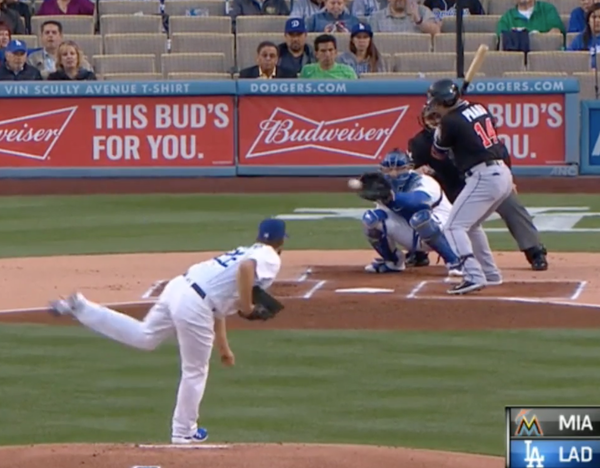 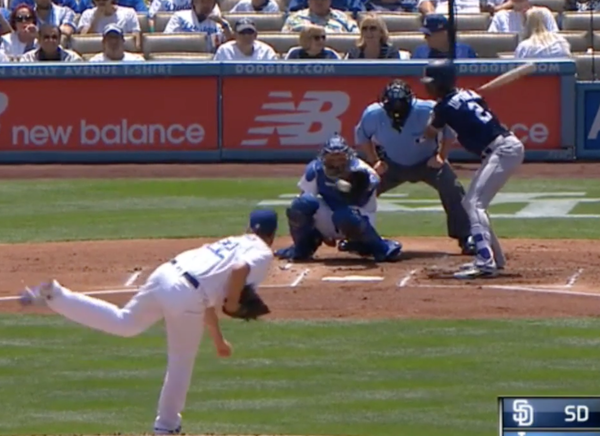 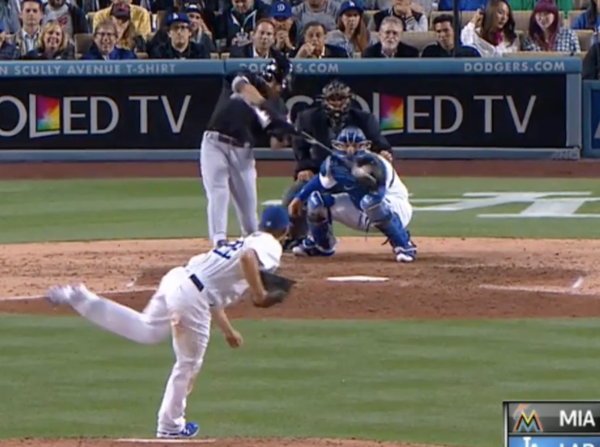 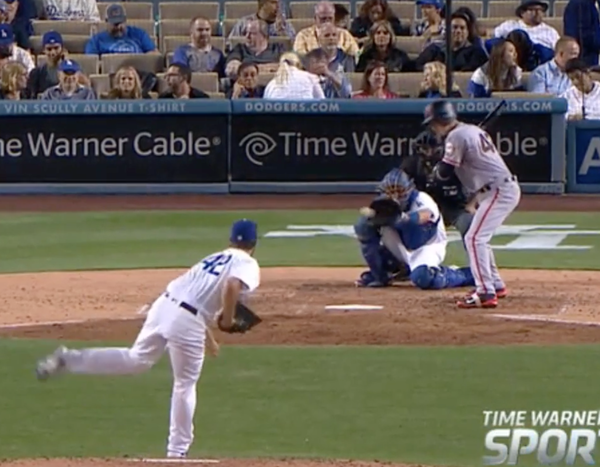 Only one of the fastballs was to a pitcher, and that one missed its target,

so it’s not that he’s just grooving to the worst hitters. That said, here's the list of batters who’ve gotten a Zone 12 fastball this year:

Furthermore, eight of these 20 fastballs came in the first inning, five were thrown to the first batter of the game, and 14 of the 20 came in the first three innings, all wildly overrepresented as a portion of Kershaw’s total pitches thrown. So there’s intent evident in these pitches. There are clearly some accidents on this list, but there are also plenty that were more or less by design. This might not seem necessary to prove, but considering we’re talking about a tiny subset of Clayton Kershaw’s pitches, and by one standard the very worst ones he threw, I think it is. At the very least, it reframes these pitches as not actually the very worst ones he threw. (I’m not sure Clayton Kershaw has worst pitches.)

Anyway, if there’s a story here about why Kershaw’s fastballs down the middle don’t get hit (besides “it’s literally Jon Jay”), it might be this: Clayton Kershaw’s four-seamer typically has around 11.5 inches of “rise.” This year, it’s been 12.2 inches, a career-high and the fifth most among all starters. But on fastballs down the middle, it’s 13.4 inches, and 14 of the 20 have had at least a half-inch more “rise” than his typical, 12.2-incher. The six exceptions include the only two Zone 12 fastballs that have led to basehits this year, to Christian Yelich and Erick Aybar. Actually, those are the only two Zone 12 fastballs that have been put in play. The rest were all fouls, swinging strikes, or taken. (One of the taken pitches, to Hunter Pence, was miraculously called a ball.)

Can we just pause for a second: 20 fastballs thrown right down the middle, and “only” 93.1 mph. Twelve swung at. Only two balls put in play.

Yes, usually the story is also that he misses his target:

but sometimes he just throws a nasty fastball

with a ton of movement: 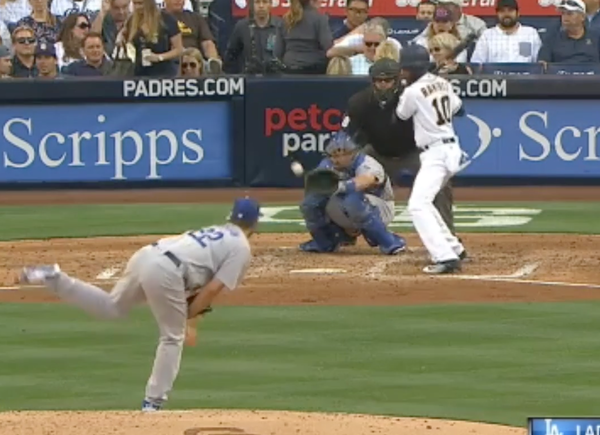 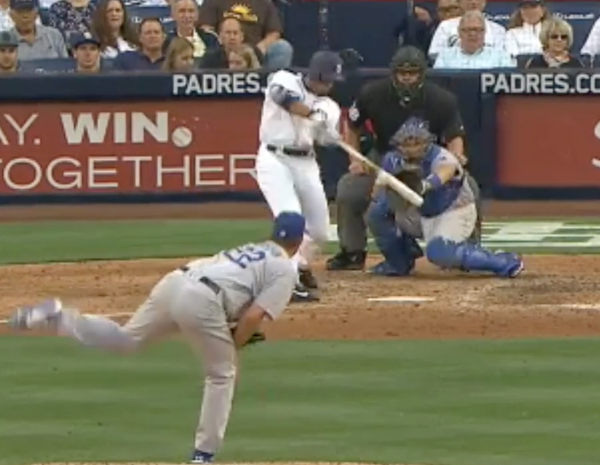 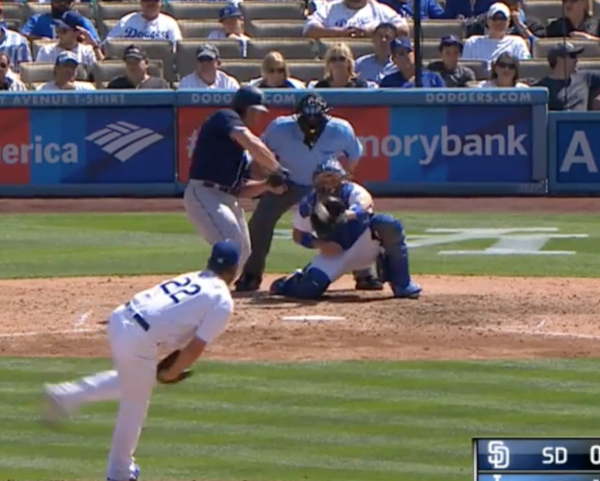 Hey, what luck: I get to end this on a Vin Scully call. After that last curveball, to Brett Wallace, Scully chuckled. "Boy, that pitch is a killer," he said. "And he throws it right in the middle."

*Well, undoubtedly that’s part of it, too.

You need to be logged in to comment. Login or Subscribe
timferr
Nice piece Sam
Reply to timferr
bryanherr
Another fun article by Sam.
Reply to bryanherr
jfranco77
This is great. I especially love the Braves guy (the still picture for the last slider). Stepping way in the bucket and pounding it into the ground. On a pitch right down the middle. So Kershaw but also so Braves.

I also like the Padres guy where you can see the 4 on his jersey (I think it's Jay) ... flinching out of the way a bit on a fastball down the middle.
Reply to jfranco77