The Monday Takeaway
Chris Archer woke up Monday with as many losses as he had starts, and the blame for most of them laid on the right-hander, a popular preseason Cy Young Award pick, considering his alarm clock rang with his ERA at 7.32. The strikeouts were there—29 of them in 19 1/3 innings—but they were joined by 11 walks, and 30 hits, and six home runs.

Archer’s velocity was down, 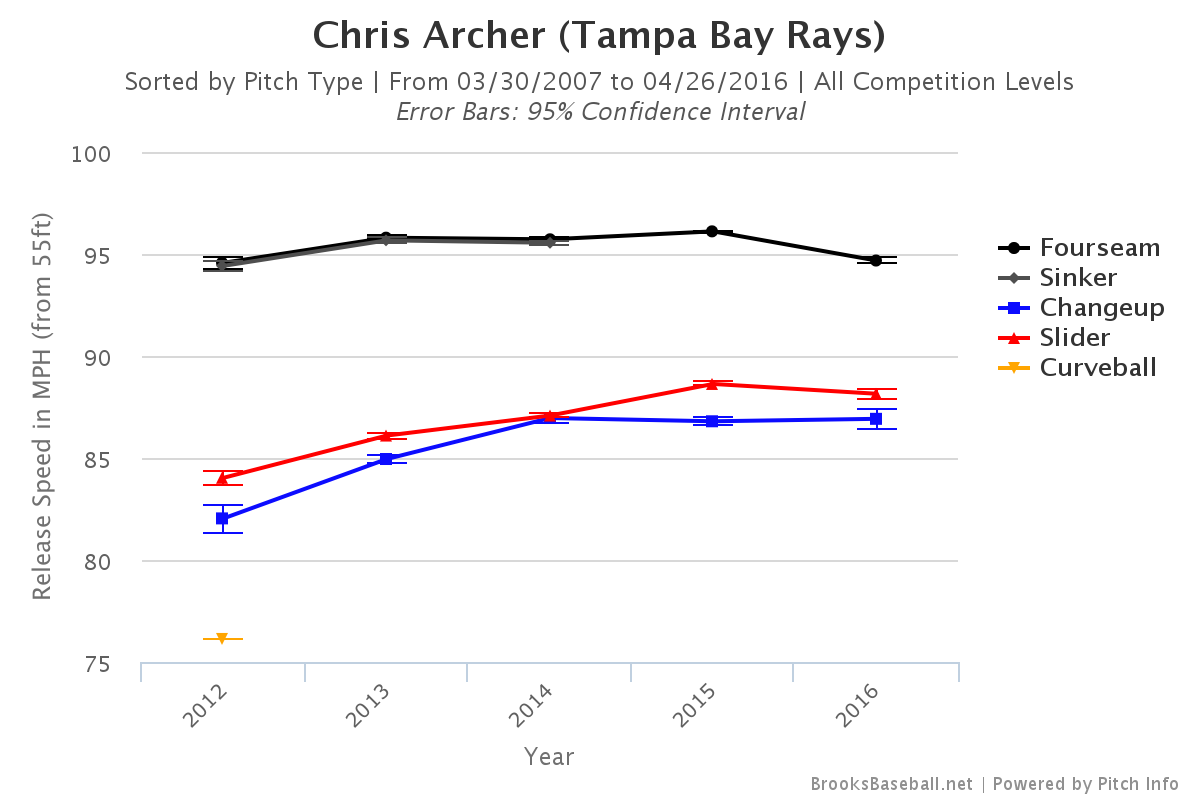 his release point was drifting, his foot strike was wandering, and his BABIP allowed was a cool .462.

Then Monday night came, and the Orioles came to Tropicana Field only to find that vintage Archer had returned. Chris Davis saw it firsthand. From 3-2 changeups

to a fastball that touched 98, Archer had everything working in the series opener against the O’s. And, on top of all that, his control was back, with 65 strikes in 93 deliveries and no walks to detract from his 6 2/3-inning, 10-strikeout night.

With Archer back in peak form, all the Rays needed were some runs. His batterymate, Curt Casali, had that part sorted, doubling home the opening salvo in the fifth

and taking one for the team with the bases loaded in the sixth:

That would do it for the scoring in the 2-0 Rays win.

Quick Hits from Monday
Noah Syndergaard was great for six innings Monday, sidestepping five stolen bases by the Reds and his own wild pitch with nine strikeouts, many of them in key spots. But when the seventh rolled around, two singles and an error by Thor put the Mets’ 3-1 lead in grave danger. Antonio Bastardo took over with the Reds within one run, and a walk and a single at the lefty’s expense made it 3-3 in the Queens.

Fortunately for the home nine, the Reds bullpen has been awfully generous all season, and one of its newest members, JC Ramirez, was feeling generous Monday night. Let’s have a quick look at the target that Devin Mesoraco set for Ramirez’s 0-2 pitch to Neil Walker: 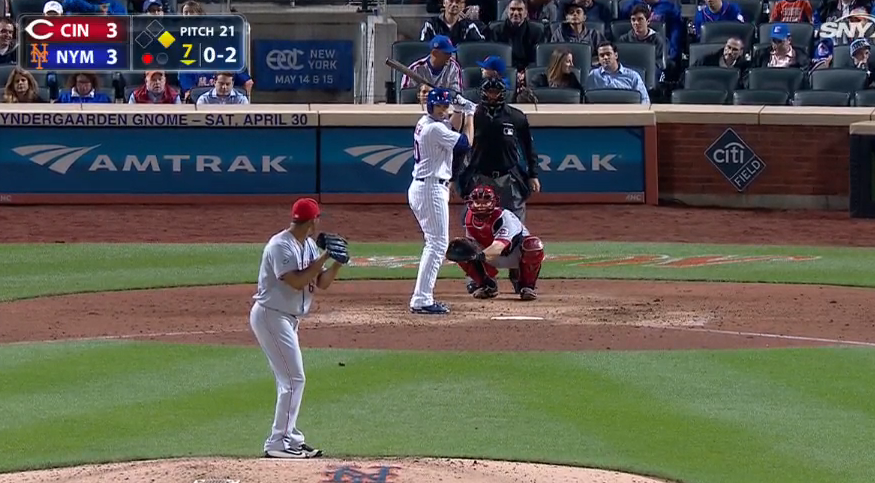 The message from Mesoraco to Ramirez: If you hit the guy in the knee, we’ll live. But whatever you do, do not leave this out over the plate. 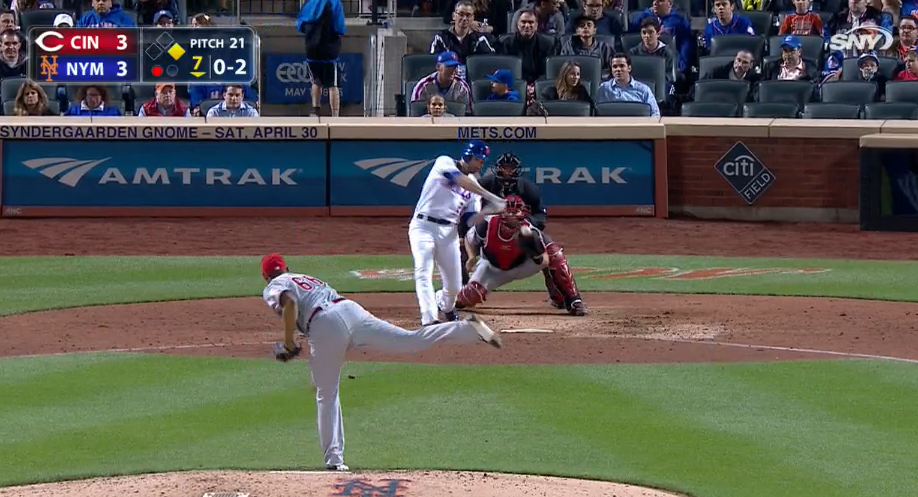 And just like that, it was 5-3 Mets. Walker’s homer was the infielder’s eighth of the season, good for second in the majors behind Bryce Harper. It was also the Mets’ 26th in the last 10 games, matching a franchise record for a 10-tilt span.

Addison Reed and Jeurys Familia nailed down the victory.

While we’re on the subject of terrible two-strike pitches, here’s another, equally costly one, from Indians reliever Zach McAllister:

Oswaldo Arcia unleashing the pent-up fury of a team-wide slump at the plate into a satisfying walkoff blast.

Jeff Locke entered play Monday with a 7.24 ERA. He’d allowed 23 hits and 13 walks, and uncorked three wild pitches, while striking out seven in 13 2/3 innings. And, on top of all that, he was due to pitch at Coors Field. The stars were aligned for disaster to strike, for Clint Hurdle to dig deep into his bullpen on the first day of a series at Coors Field, for the Buccos to have a long night in the mile-high air.

As Rockies manager Walt Weiss watched the scuffling southpaw mow down his powerful lineup, he began to get a little testy. Each called strike made his blood boil, and finally, after Nick Hundley took strike three, Weiss got himself run:

Locke pitched well Monday, better than he has all season by a long shot, mixing fastballs and changeups, throwing strikes, and keeping the Rockies on their heels. But he had help, too, from one of the game’s best framers in Francisco Cervelli, and from home-plate umpire Lance Barrett, who was, perhaps, a bit too impressed with Cervelli’s deceptive glovework:

That red triangle, way out on the right, was the pitch that got Hundley punched out and Weiss tossed. Barrett rang up four Rox in the first four innings, and it’s hard to fault Weiss for sacrificing himself to inform the arbiter that enough was enough. And if it wasn’t clear the first time, Ryan Raburn hammered it home in the sixth:

See that red triangle, down and well to the left of the zone? That’s the pitch that got Raburn all hot and bothered after he became Locke’s eighth and final strikeout victim of the night.

At the time, this was but a 1-0 game, the Rockies one swing away from drawing even. But come the seventh-inning stretch, the Bucs had pulled away, leading 5-0 when the Rockies scratched across their first run against reliever Rob Scahill. The Pirates went on to win 6-1, leaving the Rox to hope that Dale Scott won’t be quite as taken by Cervelli’s presentation skills when he calls balls and strikes for Gerrit Cole tonight.

Finally, in Seattle, it was a matchup of Fister and Walker. One of them walked seven. The other was Taijuan Walker.

With his fastball averaging 96 and bumping 98, Walker just pounded the strike zone with the hard stuff:

And all those orange squares inside the black box are hard evidence that his four-seamer was too hot for the Astros to handle. Walker threw 74 fastballs in all, 50 of them for strikes, of which 12 were whiffs. His splitter and curveball were effective, too, but it was the fastball that carved up A.J. Hinch’s lineup, yielding 11 Ks in seven innings of one-run ball.

As for Fister, he was the walker on Monday, coughing up seven bases on balls, and throwing just 60 of 113 pitches for strikes. All of this was severely uncharacteristic of the 32-year-old right-hander, whose 1.8 career BB/9 coming into yesterday’s outing was the best among all active major-league starters with 1,000-plus innings.

Fister had only once walked even five batters in a start, and that was nearly five years ago, when he was a Mariner. Last night, he had no command of anything,

routinely missing the zone by a foot with his two-seamer, cutter, and changeup alike.

The Astros can hit—they had 10 of those Monday, including three doubles, though they weren’t strung together to produce more than two runs—but it’s the starting pitching that will have to come around if they’re to dig out of an early 6-14 hole. This 3-2 defeat, however, just piled one more question onto the mounting stack of doubts surrounding Hinch’s starting five.

Francisco Lindor is the total package at shortstop: arm,

and, as we learned yesterday, concentration:

The Defensive Non-Play of the Day

As Marcus Semien lofted this pop fly to center, he slammed his bat down in frustration. Then he watched Tyler Collins lose sight of it and Justin Upton kick it, and Semien slid into third with a Little League triple. Meanwhile, the Comerica Park crowd expressed its displeasure with Collins, and Collins…

…expressed his right back.

But all’s well that ends well, and that happened with the Tigers up 6-0. Miguel Cabrera, who’s well within Tigers fans’ good graces, busted out of an early rut with two big flies,

and Collins’ bird was just a footnote in the 7-3 Detroit win.

Three weeks into the season, the major-league leader in strikeouts per nine innings (K/9) is not Noah Syndergaard or Vincent Velasquez or David Price or Jose Fernandez. It’s 36-year-old Rich Hill, who’s bounced back from an ominous spring to fan 29 batters in 19 1/3 frames.

To be sure, all of those punchouts have come with worrisome control. Joining them on the stat line are nine walks and a league-high four hit batsmen, although even those totals pale in comparison to the 15 walks issued by Hill in a dozen Cactus League innings. As long as Hill is racking up the whiffs and stranding the majority of those runners, as he has en route to a 3.32 ERA, the A’s will take it.

Hill struck out 10 Yankees last Thursday, his second double-digit K game of the season, recording 11 swing-throughs on fastballs while mixing in a healthy dose of breaking balls with two strikes. His most effective strikeout pitch on that day was the backdoor curve to right-handed batters,

Hill will need that pitch to do work again this evening, when he toes the rubber at Comerica Park against Miguel Cabrera, J.D. Martinez, and the Tigers. He’ll square off with Mike Pelfrey in game two of four (7:10 p.m. ET).

Shelby Miller’s first month with the Diamondbacks hasn’t quite gone as planned. First, he served up five home runs in his first two starts in the Snakes’ new uniforms, and then, he left his third start after just 1 2/3 innings because he scraped his hand on the mound. The cuts on his knuckles continued to bother Miller in start no. 4, a two-inning, five-walk adventure in San Francisco, but those should’ve healed by now, leaving the right-hander ready to hit the reset button on his 2016 campaign.

Miller can begin making amends with his old mates in town, as the D’backs open up a series with the Cardinals. The Redbirds’ first-round pick in the 2009 draft was shipped off to the Braves in the Jason Heyward blockbuster, and he proceeded to hold the Cards to just five hits and one run in 15 1/3 innings last year. He’ll look for similar results while dueling Carlos Martinez tonight (9:40 p.m. ET).

You need to be logged in to comment. Login or Subscribe
jsdspud
Is the typical strike zone shown for the Col/Pit game for all RHH or just umpire specific.