I was listening to the Red Sox home opener earlier this season, and after one of Craig Kimbrel’s fastballs reached its destination the voice of Joe Castiglione cracked through my radio: fastball in there for a strike . . . at 97. That’s fast. Sort of.

In spring training 2010, Kevin Goldstein asked John Coppolella, then a baseball ops staffer for the Braves, about the development of Kimbrel. Coppolella responded:

Craig has some of the best stuff in the minor leagues with his fastball and his curveball. If we're waiting for him to post a seven-to-one strikeout to walk ratio, that's probably not going to happen at any level. He's going to miss bats and he's going to walk some guys. The key for us is to get those walks under control. He's never going to have pinpoint command, but that's also one of the reasons he's as successful as he is. . . .

Kimbrel lived up to Coppolella’s Nuke LaLoosh-like description out of the gate in 2010, posting a gaudy 45.5 strikeout percentage while walking 16 batters in his first 20 2/3 big-league innings, likely striking fear into the hearts of the opposition for multiple reasons. In 2011 Kimbrel was handed the keys to the closer’s role and promptly dominated, nearly cutting that walk rate in half, and a year later he did his best to break the cFIP scale by notching a 20, a number the likes of Aroldis Chapman, Dellin Betances, and Wade Davis haven’t matched—at least not yet, anyway. Kimbrel also recorded an 8.29 strikeout-to-walk ratio that season, probably to 2010 Coppolella’s surprise.

Without getting lost in the details—for instance, his 38-game scoreless streak in 2011 in which he didn’t allow a single extra-base hit or his 56 percent June-October 2012 strikeout rate—Kimbrel has been the face of an era of hard-throwing, impossible-to-hit relievers, and he’s hardly missed a beat since his 2010 debut. Even last year’s hiccup in San Diego—Kimbrel plus Petco Park meant that we were initially forced to ponder the concept of a sub-zero ERA—would have qualified as a sparkling campaign for a mortal reliever, what with that 70 cFIP and 13.2 K/9. 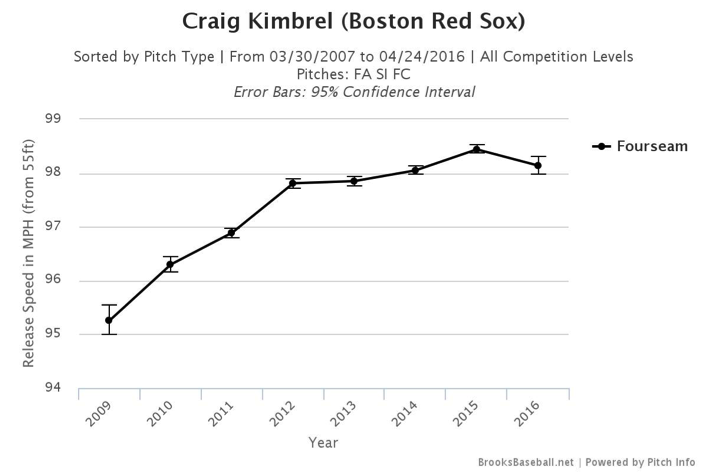 Consider the amount of 97-and-up mph fastballs that Kimbrel has thrown in each year of his career,

which is really just another of saying the same thing: this guy always threw hard, and now he throws harder. Heck, he had stories written about his velocity before he started throwing really hard. Kimbrel’s still the same type of pitcher he was as a rookie, give or take, but now just about everything straight registers north of 97, and even the curves come in faster. Of course, Kimbrel’s velocity gain has come in an era of ridiculous velocities.

In that same Red Sox-Orioles game referenced up top, Baltimore used three consecutive relievers—Mychal Givens, Brad Brach, and Zach Britton—who all touched 96-plus, and there’s a (presumed) human being out there named Noah Syndergaard, a starting pitcher, who routinely throws 102. Jake Diekman (96.91), Pedro Baez (96.98), and Enny Romero (97.03) have all averaged around 97 mph this year, and you may or may not have heard of them depending on the depth of your fantasy league. Ninety-seven just ain’t what it used to be, but let’s check the numbers to be sure.

The following image shows Kimbrel’s share of 97-plus mph fastballs compared to all other major-league relievers in each year since 2011. 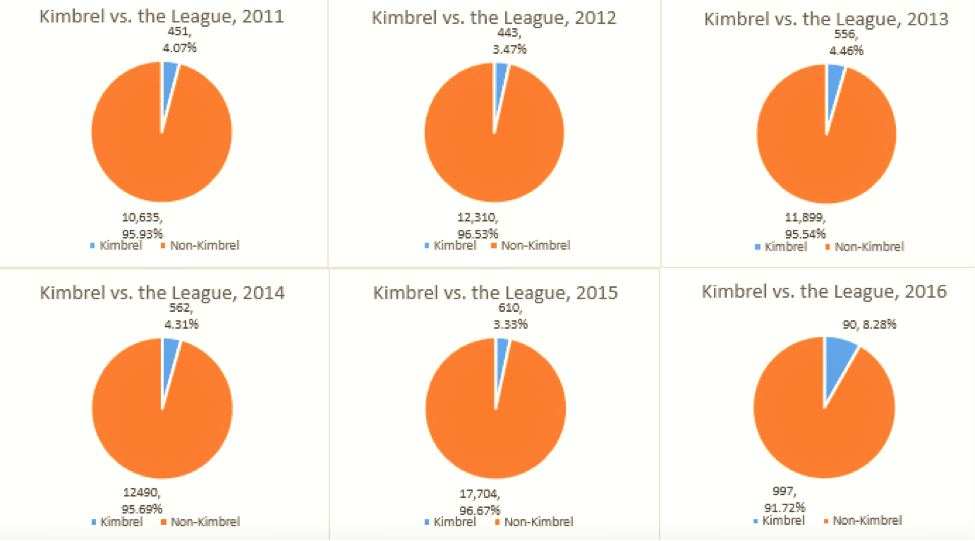 What’s going on here? No, really, you tell me.

In each year from 2011 through 2015, Kimbrel threw anywhere from 3.3 to 4.5 percent of all 97-plus mph fastball thrown by relievers. His lowest share of those pitches actually happened in 2015, when Kimbrel threw the highest amount of 97-plus fastballs in his career—the rest of the league, however, threw 17,704 fastballs 97-and-up, a 42 percent jump from 2014.

Ninety-seven just ain’t . . . wait a minute, look at 2016. Of all the 97-plus mph reliever fastballs thrown so far this season, 8.3 percent belong to Kimbrel—that’s like one out of every 12 pitches!

1. Kimbrel’s throwing more fastballs. His 79 percent fastball rate is the highest mark of his career, up nearly 10 percentage points from last year.

2. It’s April, which means 1) it’s early and 2) velocities tend to be down in April. Even Kimbrel has historically posted lower-than-usual velos early in the season, but his average fastball speed last April and so far this April have been above 98.

3. Aroldis Chapman and Carter Capps haven’t thrown a pitch. Those two guys alone tossed a combined 1,103 97-plus mph fastballs in 2015, most of them belonging to Chapman—and most of them registering north of 100. More broadly, pitchers that throw really hard tend to eventually miss time or encounter decreased velocity, and maybe the league’s high-velocity reliever factory is finally struggling to keep up with Kimbrel’s indestructible right arm.

Perhaps most interesting is that third point. As shown earlier, Kimbrel’s average fastball velocity has continuously trended up, a feat made more impressive by the fact that you aren’t supposed to be able to do that. What we know about the reliever aging curve in regards to velocity is that it goes up slightly after debut, stabilizes, and then begins descending at age-26 or so. Velocity around the majors hasn’t increased because the same pitchers from 2010 are throwing harder now, it’s increased because major-league teams are selecting more and more hard-throwing relief pitchers after the middling guys wash away. Kimbrel decided 95 and 96 wasn’t fast enough, reaching his high-water velocity mark at age-27, and it’s unclear yet if that number will stand as his peak. He’s sort of an outlier.

Chris Davis did this to a 98 mph Kimbrel fastball, 16 pitches after the 97 mph heater that got Castiglione all excited:

Then on Sunday night Colby Rasmus mistreated another Kimbrel offering, and this one came in at 99:

The theory here was supposed to be that hitters have gotten comfortable with the super-fast fastball, and that Kimbrel’s stuff, despite coming in harder and harder and harder, has quietly morphed from electric to electric-but-we-saw-that-yesterday. That Kimbrel stare just doesn’t carry the same intimidation factor for hitters who just faced off against Arquimedes Caminero’s 100something mph sinker or Chapman lefty-on-lefty or the mere discussion of Syndergaard at the family dinner table.

Data often gets in the way of our finest theories, of course, mucking up our thought-process with hundreds of previously unconsidered complications. The numbers say Kimbrel is not only throwing harder now but that he’s also throwing harder relative to the league—at least so far in 2016. The numbers also say that hitters don’t necessarily improve against hard stuff the more often they see it, and that we shouldn’t get too caught up in a relief pitcher’s early-season performance.

Kimbrel’s on the mound as I write this on Monday night, back in Atlanta, still pumping high-90s heat at suspecting (yet mostly overmatched) hitters. So long as the arm stays healthy, 97 and 98 and 99 mph fastballs out of Kimbrel’s right hand is one thing we can count on. The rest—like what will happen after those pitches reach the plate or which hard-thrower will make his debut tomorrow—we just don’t know.

Thanks to Sam Miller and Rob McQuown for research assistance.

You need to be logged in to comment. Login or Subscribe
sbnirish77
"Kimbrelâ€™s on the mound as I write this on Monday night, back in Atlanta, still pumping high-90s heat at suspecting (yet mostly overmatched) hitters."

Were you watching the night before in Houston?