Pitchers are constantly reminding us that the progression from high school prospect to Legit No. 1 Starter isn’t steady, even for the ones who actually make it. Vince Velasquez was extremely recently struggling in his first trip around the league, as a reliever. Somehow, the man who on Thursday threw what might hold up as the most dominant start of the 2016 season wasn’t good enough to make a postseason roster as a reliever 10 games ago.

But Velasquez isn’t unique. His start Thursday was a familiar genre story: Kerry Wood was, to quote myself, a 20-year-old who had a 5.89 ERA in four career starts, a career minor-league walk rate of 6.8 per nine, and a career minor-league ERA of 3.91 when he threw the most dominant start of all-time. Shelby Miller had a 4.74 ERA in Triple-A in 2012, allowing a home run every five innings; in May 2013, he struck out 13 and allowed one baserunner in one of the greatest starts I ever watched. The same week, Matt Harvey struck out 12 and came within one baserunner of a perfect game; the previous summer, he had been okay in Triple-A.

There’s that moment when the future ace figures it out, sometimes only for three hours at first, but long enough for us to see him do something only a dozen or so living humans are even capable of. That’s what Velasquez did Thursday, and it was the first great moment of the 2016 season. Here it is, in nine of my favorite pitches.

The first inning was so simple. He threw four-seam fastballs. He threw 16 of them, to righties and to lefties. Some of them were well placed, and a bunch of them—particularly when he targeted arm-side locations—were not, as he yanked them down and toward the left-handed batters box. You wouldn’t, looking at the pitches, have seen anything exceptional coming on this day, but you might have if you were just looking at the batters. Because, to reiterate, he threw 16 consecutive four-seam fastballs, and yet given the chance to swing at six of them Wil Myers never got the bat off his shoulder. He took each and every one, including this one, Velasquez’s second-fastest of the inning (at 97.6 mph) and his most perfectly placed.

I don’t know why he throws his hands up as he walks off the mound. Maybe frustrated he didn’t get the same call on the first pitch of the at-bat? It’s a mystery, that doesn’t matter.

He finally throws something other than a fastball in this inning—three of them, in fact, all curves. But he’s still telling us, and the Padres, that he believes his opponents can not measure up to his fastball, by going to the fastball as his primary two-strike pitch. This pitch marks the first time he hits an arm-side target squarely. Actually, it’ll be the last time for a while.

Because why would he throw this pitch? He’s throwing nothing but fastballs against major-league hitters, who are doing nothing with the pitch, and then he gets the pitcher up at the plate. He eases a 92 mph fastball in for strike one swinging—92, when he’s sitting 95 for everybody else. So he knows that the pitcher can’t hit even his okay fastball, let alone the hard one. But instead of firing three straight past him, he lollipops a curveball right through the zone, the one pitch he throws that Drew Pomeranz might conceivably be able to catch up to (if not actually, you know, hit). So why? My theory is that he knew what he was going to do next: Start using the curveball a lot, including five straight to Cory Spangenberg in a single at-bat this inning, and he wanted to make sure he actually had the pitch. I think he was using Drew Pomeranz as a dummy just to check and make sure he could snap off that real good one for a strike, since he had hardly thrown any in the game to that point. And from that I’ll further hypothesize, based on his throwing all fastballs in the first and his testing the pitch against the pitcher in the third, that Velasquez might very well have not had a feel for the pitch in the bullpen. Which raises the possibility that Vince Velasquez walked to the mound on Thursday worried that it was going to be a bad day. Progression for pitchers, man. Never steady.

It also had more horizontal movement than all but 11 of the 79 four-seamers he threw on the day, which, unsurprisingly, you can also tell with your eyes.

This is a terrible pitch, obviously. I liked it because Kerry Wood had one just like it in his start:

I have no way of knowing whether the experience of dodging this pitch was at all in Blash’s mind when he took this hack for strike three.

Okay, I’m going to prepare you for where we’re going to go with these final four innings. Up to now, Vince Velasquez has been pitching wonderfully, striking guys out, particularly on swinging strikes at his four-seam fastball. From the first inning on, he’s been able to hit every glove-side target with precision, and tends to miss every arm-side target by plenty. He hasn’t thrown a changeup all game; he might have thrown one sinker, and if he did, it was banged for a single; he has thrown a bunch of curves, and they’ve been great. He has succeeded with extreme simplicity. There is nothing wrong with that. If you give me a menu with 20 types of pitching prospect on it, I might take the one who can utterly dominate with nothing but a four-seamer and a curveball over all the others, knowing that my pick is more likely to develop a changeup or command or a plan than another pitcher is to develop a comparably dominant fastball. But simple. Aesthetically pleasing, if not totally satisfying.

Here, though, we see him once again hit his target on the arm-side. He’s starting to pick up control to both sides of the plate. He also throws his first changeup in this inning, though it’s not a very good one. We’re watching him add weapons, mid-start.

We’ll get back to this idea. First, let’s check back in on Jabari Blash to see how he has been doing since he dodged the curveball at his dome.

Yeeah. That’s the good stuff. It took him so long to finally locate that pitch, that fastball down in the zone with the little tail moving it into the corner, right in that spot to lefties, 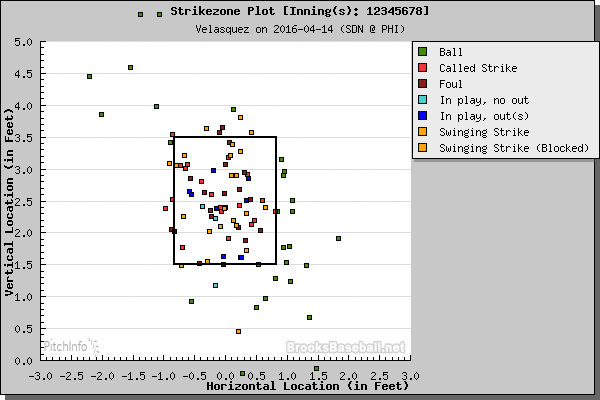 and finally here in the eighth he’s got it. You can’t really say he had great command all day because, to now, he’s only had great command to one side of the plate; but finally, he’s hitting both sides consistently. He’s also thrown two sinkers in the inning, the pitch that he was said to be most intent on developing this spring so he could work late in games. Neither sinker is a strike, and neither gets him a quick out, but they were the two pitches that preceded this one. It’s not inconceivable, if also not verifiable, that Amarista didn’t swing at this because he thought, based on the previous two pitches, that two-seam movement would take it out of the strike zone. Counterpoint: Who cares if he swung? He wasn’t going to hit the pitch if he had.

I’m not saying Velasquez is pitching better in the eighth than he did in the first. I’m saying that he’s a better pitcher right now than he was two hours before right now.

His third changeup of the night, and finally pulls the string on one, finally manages not to miss over the plate, finally gets a hitter who is truly befuddled.

Arm-side, no movement of the catcher’s glove whatsoever.

So he started the game as a two-pitch pitcher with limited command of an overpowering fastball and a secondary pitch that was definitely secondary. That guy, the two-pitch guy, was great, as good as almost anybody I’ve seen this year. He ended the night as a three-pitch pitcher with impeccable command to both sides of the plate, a knee-buckling curve that he could throw for strikes or as a chase pitch—I didn’t even show you some of the Alexei Ramirez chases—plus a usable changeup and, against lefties, a sinker. That guy, the three-pitch/great command guy, might be something special.

You need to be logged in to comment. Login or Subscribe
heterodude
Great write-up on a great game. Thank you.
Reply to heterodude
Ozdoltorps
I agree, this was awesome.
Reply to Ozdoltorps
lipitorkid
What would he have done with Posey behind the plate?

In all seriousness though, I don't know how to evaluate pitch framing, but it seems like Rupp did a nice job calling the game. Am I wrong?
Reply to lipitorkid
cbreezy
Looked good to me as well. Don't they have pitch framing statistics now? Maybe they aren't publicly available...
Reply to cbreezy
jkulik
Phenomenal article
Reply to jkulik
oldbopper
I sat watching and was blown away. To me, it was the curve ball to Upton in the 9th that was the cherry on top. His next start is must see TV and I see a drive to Philly in my future.
Reply to oldbopper
bmarco
great writeup - thanks!
Reply to bmarco
dsilvers
This kind of article is EXACTLY why I subscribe to BP. I like numbers as much as the next guy, and BP does a great job of that. But this goes way beyond numbers, to show the game within the game. These clips show the progression of how a pitcher works out their stuff, and how they work through a game.

And I agree that it looks like Rupp was doing a really good job of framing, as least from these clips.

The Padres did look overmatched on the whole, though they did hit some balls hard. Not very many, admittedly, and the Phillies' defense was up to the task on all of the hard flies. And that, as they say, is about all the bad news there is.

Vince struck out the side in the first inning. As the game went on, he looked plenty dominant. When his 110th pitch in the 9th inning hit the scoreboard at 97 mph, my son and I figured that Vince can go 9 any time he's having a good day.

Wow. We were so glad to have seen the game in person.
Reply to KBarth
cbreezy
Velasquez's stuff reminds me of Erik Bedard before he was traded to Seattle. He had a sick fastball that often seemed to be "effectively wild" and had a filthy 12-6 curve that he could throw for a strike in virtually any count.