The Thursday Takeaway
Last night’s game between the Cubs and Diamondbacks can be described in many ways. It was a slugfest; a night in which neither starter (John Lackey and Rubby De La Rosa) had excellent stuff by any stretch of the imagination. Lackey was wild and missing his spots. De La Rosa was De La Rosa.

Yet the mammoth run total wasn’t the story of the game, nor was it the fact that Kyle Drabek apparently still exists. Nor was it the fact that Cubs reliever Pedro Strop got a plate appearance. It was that Kyle Schwarber was taken off the field on a golf cart after he crashed into Dexter Fowler at full steam ahead. Jean Segura hit a line drive into the left-center field gap, and the two outfielders both barreled out to try to track it down. What resulted is ugly.

Outfielders collide from time to time, especially when the stadium is loud (the roof was closed at Chase Field) and they can’t hear each other screaming “I got it.” X-rays on Schwarber’s ankle came back negative, but the team is still awaiting the findings of an MRI that will be performed today. The scan will include his knee. As of now, Schwarber has been diagnosed with a sprain in his left ankle.

The best case scenario is that the sprain is all. The worst is that his knee is badly damaged. Either way, the stakes are higher for Schwarber than for the Cubs, who are well prepared to fill the hole in left field. An amalgamation of Ben Zobrist, Kris Bryant, Javier Baez, Jorge Soler, Matt Szczur and Juan Perez will be more than enough to make ends meet. Chicago’s depth and positional flexibility should allow them to weather a major injury, and from a role standpoint (if not a talent one) Schwarber may be the player that they’re most ready to replace in the aggregate.

That doesn't change the fact that his powerful bat will be absent from the lineup for the foreseeable future. PECOTA pegged Schwarber to produce a .293 TAv and 3.5 WARP for the remainder of the year. He’s one of the better sluggers in the game right now, and if his knee is indeed injured, it could take a long time for him to come all the way back. Is Chase Field somehow haunted and claiming the health of outfielders? Probably not, but then again, it did offer a cruel reminder that another star was recently claimed by the fiendish injury demons here. 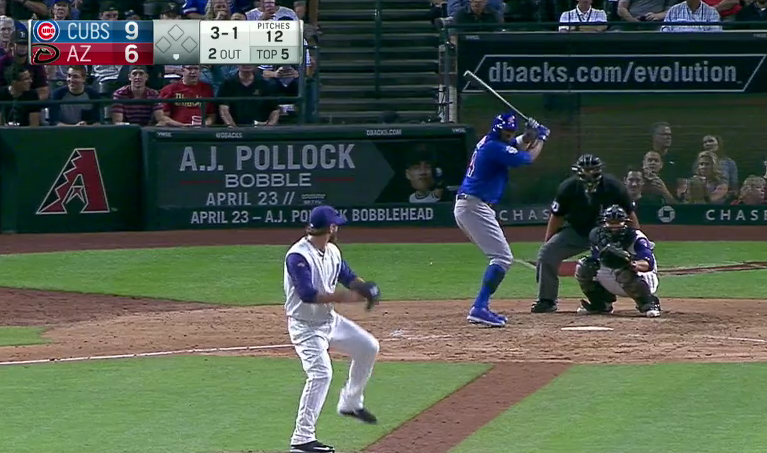 Quick Hits from Thursday
So, there are two outs. It’s the bottom of the ninth. Two runners are on base. Mike Trout is at the plate. Shawn Tolleson is ready in the bullpen. Do you pitch to Trout, or walk him to load the bases and deal with Albert Pujols? Jeff Bannister opted to pick the second poison, and it ended up burning his innards in a cataclysm of acid.

Tolleson, who appeared in 73 games last year and had already been tossed into two in 2016, gave up a walk-off hit to Pujols. It was just the second hit of the year for Pujols, who has an OBP disadvantage of 85 points compared to Trout over the past three-plus years. Still, sometimes Dad Strength is just what the situation calls for.

Top prospect Robert Stephenson made his long-awaited big-league debut in Cincinnati, going five innings and allowing four runs to the Phillies. However, that’s not the fun part.

Well, there really is no fun part if you’re a Phillies fan. It should be common knowledge at this point that the Phillies are not a particularly good baseball team, and won’t be a particularly good baseball team for a while. There are some interesting players—Maikel Franco is fascinating, and Odubel Herrera is fun; three of their starters are young and exciting; Tyler Goddel was the first overall pick in the Rule 5 draft, which we guess counts for something—but on the matter of the bullpen:

The Phillies may be essentially tanking. But their bullpen has the potential to be something truly… well, special is a word that usually has a positive connotation, no? Let's go with abnormal.

The Defensive Play of the Day
Bro, Brett Lawrie plays a pretty nice second base. Don’t believe it? Brah, just check this out.

What to watch on Friday
Perhaps it’s a case of East Coast Bias (gasp!), but both New York teams make an appearance here.

The Tigers and Yankees will open up Comerica Park with a throwdown between Luis Severino and Jordan Zimmermann. Severino made his debut last year as part of the new wave of Bomber prospects descending upon the big leagues. He dazzled with his sizzling fastball and nasty changeup and showed his top-of-the-rotation potential. The powerful Tigers lineup will be a fine test for the 22-year old. The Bombers, who have been hitting bombs-a-plenty, will look to see if Zimmermann will continue on with his career high 1.1 HR/9 from 2015.

While that game is ongoing, Jacob deGrom and the Mets will face off with Jerad Eickhoff and the Phillies. It’s must-see TV any time deGrom pitches, of course, but Eickhoff is the real story here. The righty was part of the massive haul of players that Philadelphia received in the Cole Hamels deal. He pitched to a 2.65 ERA over eight starts and generally impressed the heck out of the baseball world at large. If Eickhoff can continue that positive production, it will be a massive boon to the future of the Phillies.

The San Diego Padres will match up with the Rockies at Coors Field. The location of this game is extremely important, as the Padres have not yet scored a single run. Playing a game at the hitting equivalent of Cape Canaveral with Jordan Lyles on the mound will likely put an end to that streak. But damn if this Padres lineup doesn’t make one think twice about whether or not they’ll pull it off. Better tune in and find out.

You need to be logged in to comment. Login or Subscribe
oldbopper
A key play in the Cubs-D-Backs game was Rizzo tagging up from first on a foul pop to the catcher. I wonder if anybody has ever seen that play before.
Reply to oldbopper
dukeandduke
Dave Kingman was a better left fielder than Kyle Schwarber.
Reply to dukeandduke