In 1941, Boston Red Sox second baseman Bobby Doerr started off the season by hitting a homer in each of Boston’s first three games. For 75 years, that was the benchmark for hot-hitting second basemen, until Robinson Cano decided that it was time to meet that benchmark. Cano slugged two homers on Wednesday afternoon against the Rangers—one in the first inning, and another in the top of the ninth inning to cap a five-run comeback that powered the Seattle Mariners to a 9-5 victory over Texas.

This is the part where you have to take note that we’re dealing with extremely small sample sizes. With that being said, if you’re in a situation where you have more home runs (four) than games played (three), you’re the subject of a great many terrible “on pace for” jokes, and that’s the case for Cano. Cano is seeing a lot more pitches inside the strike zone than he did last season. Nearly 46 percent of the pitches Cano saw in 2015 were in the zone; through the first two games this season, 71 percent were, and he continued to see a steady diet of strikes Wednesday. Pitchers don’t even throw 71 percent of pitches in the zone on three-ball counts against opposing pitchers, and Cano’s barrage should only speed up the pitchers’ retreat from the zone against him. But for a well-compensated player whose early struggles last year marred his entire season–even during a fine second half—it's not inconsequential that Cano will have shiny stats on the scoreboard for quite a while this year. In other words, Andy Van Slyke probably won't be talking very much for a while.

Meanwhile, Wednesday’s ninth inning comeback for Seattle was special in more ways. For starters, they only won one game in all of 2015 in which they were trailing heading into the ninth. They’ve matched that number after just three games in 2016. This is after they scored six runs in the eighth inning of Tuesday night’s game against the Rangers, as well. This could just be the case of the Mariners coming out of the gates firing on all cylinders, or it could be a sign of things to come when it comes to late-inning heroics, or it could just be a series in search of a narrative. Either way, it’s definitely a great sign for the Mariners that both their offense and the bullpen are showing signs of life in the latter stages of games, for a change.

While Robinson Cano has come out of the gates banging, he’s been matched by an unlikely rival: Trevor Story, the rookie shortstop who has one fewer home run than Troy Tulowitzki, under whose shadow he toils, has total bases. (And Tulo has one extra game!) Story’s homer on Wednesday was his fourth in three games. Not only is he the first player in the modern era to go deep in his first three career games—he’s done all this before he gets to taste the home-cooking at Coors Field. For this, his reward is, naturally, all the exact same dumb “on pace for” jokes that Robinson Cano gets.

Maybe even more impressive: These aren’t cheapies. Three of Story’s home runs are in the top eight for distance, leaguewide, this year. And they aren’t against mop-up relievers or emergency starters: Two came against Zack Greinke, one against Shelby Miller, and one against Patrick Corbin. Greinke has thrown 2,100 career innings, and only 10 active players have two home runs ever against him; Story’s already on that list, and he’s been active for less time than this guy watched nonstop TV.

For the first time in his career, Jose Fernandez’s name went in the “L” column after a game that he started at Marlins Park. That’s not to say that this was a bad start for the 23-year-old righty, who looked dominating at times on Tuesday against the Detroit Tigers. But it certainly was a weird one. Fernandez was one strikeout away from matching a career high on Tuesday, even though he didn’t make it out of the sixth inning. He picked up seven Ks on his curveball alone, and hit 98 multiple times en route to the never-before-seen 5.2/5/5/5/1/13 line. 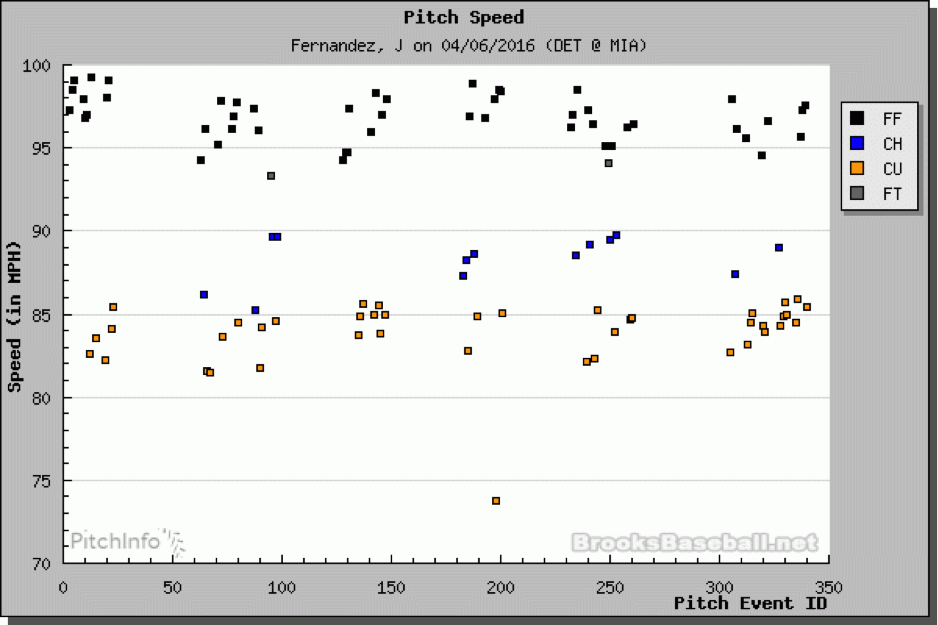 He could have escaped with the slightly more believable 5.2/5/3/3/1/13 line, but Jarrod Saltalamacchia—who homered in two runs against him earlier in the game—kept the damage going after Fernandez was relieved, driving in a pair of runners that the starter bequeathed to his bullpen. So it was, in many ways, vintage Fernandez dominance. It was imperfect, though, and now so is his career record at Marlins Park.

Defensive miscues have helped shuck the Braves of two games already this season, but one Atlanta defender who definitely is not to blame is Ender Inciarte.

Story and Cano aren’t the only middle infielders in baseball who are having a wonderful time during the first week of the season. Houston’s Carlos Correa is also mashing the ball right now, as he’s got three homers in three games. (Pace!) His third homer in particular was an absolute moonshot.

Correa’s massive home run didn’t stop the Astros from losing by 10 runs against the Yankees last night, but all eyes will be on Houston’s 21-year-old star shortstop for the next few days, or 20 years, to see how far he can take this. With Story and Cano on off-days, Correa will be the hot-hitting middle infielder to watch on Thursday (4:05 PM EST).

The Giants will be having their home opener on Thursday, and they couldn’t have asked for a more entertaining visitor than their eternal rivals. The Dodgers will be entering this game on the heels of an extremely comfortable three-game sweep of the Padres, in which they set a franchise record with a 27-inning scoreless streak to start the season. The Giants are much better than the Padres. The Giants, meanwhile, came up just short of their own sweep in Milwaukee, dropping the final game 4-3. The Dodger are much better than the Brewers. That’s part of why this rivalry works.

The Cubs had a pretty fun time during their visit to Anaheim, as they outscored the Angels 15-1 over two games. After a day off, they’ll be travelling to the desert to take on the Diamondbacks. As evidenced by the previously mentioned Trevor Story, Diamondbacks pitching hasn’t been the best, and now they’ve got to deal with Anthony Rizzo, Kris Bryant, and the rest of the high-powered Cubs offense. Meanwhile, Arizona’s Paul Goldschmidt will dig in against John Lackey just about the time that the homer he hit last year against Lackey lands: