This one was tough to write, so I solicited help from Craig Goldstein. 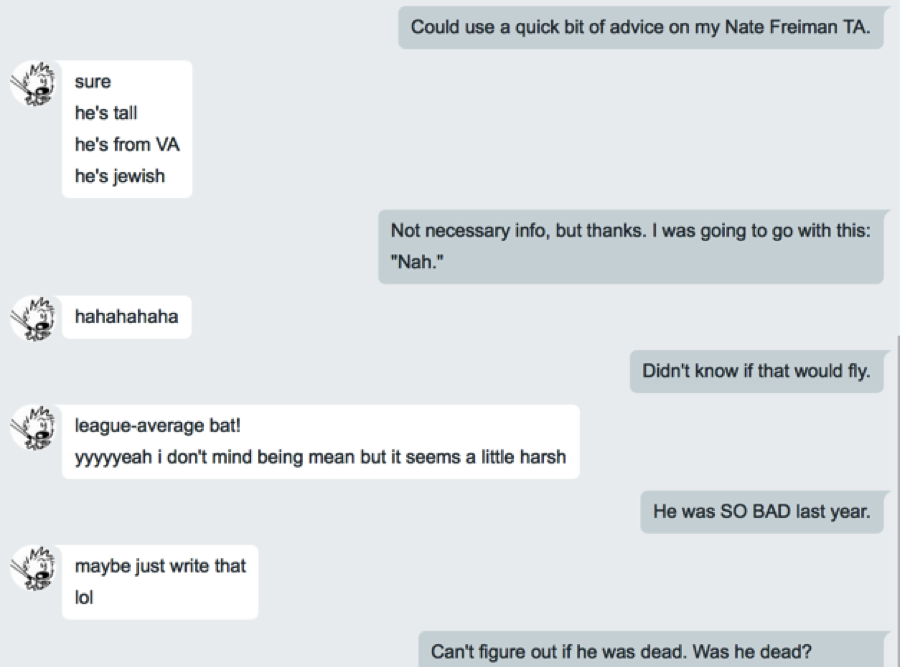 I’m not thinking he’ll make a big impact with the Nationals this year. Freiman was supposed to be a league-average bat, just like Craig Goldstein said in the image above. Over about 300 big-league plate appearances in 2013 and 2014, that’s exactly what he was. But in 2015, he spent the whole season in the minors, and suffered a back injury early on. The end result was that he posted an OBP of .279 and a slugging percentage of .321 over 300 appearances in the Pacific Coast League. Hitters like Freiman are supposed to rack up gaudy numbers in the PCL, not a .231 True Average.

He didn’t fare much better in 25 spring training plate appearances with the Braves, belting a homer but only two other hits all spring. You have to imagine that this is a challenge trade from the Nats’ perspective: They must have seen something in Moore that made them not want to keep him around any longer. The real question to me is what they see in Freiman as an upgrade. Sure, he’ll strike out fewer times than Moore would have, but a 29-year-old right-handed Triple-A first baseman is a right-handed Triple-A first baseman. Don’t expect this to move the needle much for the Nats this year, if at all.

Kratz should perpetually be sitting behind a pane of clear crystal, emblazoned with bright bold letters: “IN CASE OF EMERGENCY, BREAK GLASS.” He is the quintessential backup catcher, as he is old, well-traveled, and almost entirely without offensive ability at this stage in his career. Possessed of a .233 career True Average, Kratz was unlikely to steal the show in San Diego, let alone under the microscope of a contending team in Houston. However, he does possess a catcher’s mitt, so he will probably find work until he turns 45.

All kidding aside, Kratz does bring to the table a solid reputation as a catch-and-throw man, reportedly-good intangibles, and the excellent nickname of “Turkey Bacon.” If that doesn’t sound like the 25th man on a World Series team, I don’t know what does. BP’s catcher framing metrics show a good-but-not-great presenter of pitches, though a few years ago Kratz put up some tremendous value … at the Triple-A level. In 2011 he put up a massive 31 runs worth of FRAA value, so there’s some legacy of being able to steal a strike or two, despite the fact that his recent numbers have been much more pedestrian.

Nominally, he will back up Jason Castro until Max Stassi is able to recover from injury or until the Astros trade for Jonathan Lucroy. In practice, expect Castro to be worked hard, as Kratz has never received more than 218 plate appearances (back in 2013). Like the tiny spare tire you keep under all that garbage in your trunk, he’s great to keep around in case of emergencies, but you never actually want to use him for more than a few miles.

You would not believe how many times I picked up Moore in a fantasy league between 2012 and 2014, hoping that the 31-homer power he flashed in Double-A back in 2011 would translate to the major leagues. It hasn’t, and instead of raking in Washington, he has spent the past few seasons riding the shuttle between Syracuse and the nation’s capital, stopping only to swing and miss at everything.

Moore’s career strikeout rate is 27.4 percent in the majors, and he’s not proven any capability to make consistent contact. That’s a shame, because he’s hit 24 home runs in roughly one full season’s worth of plate appearances proving that he still has enough power to make a pitcher pay when he runs into one. Of course, as a pinch-hitter first and a position player second, he hardly adds any defensive value, whether in the outfield or at first base.

The first baseman’s stock maybe just rose a little, however, as replacement-level production may actually be good enough to get big-league at-bats in Atlanta this season. This is a team that looks incredibly weak and incredibly shallow, so one or two well-placed injuries could send Moore lumbering into regular work, or at least a platoon job against lefties. You could do worse than a Kelly Johnson / Tyler Moore platoon at first base, but you could also do better, especially when your team employs Freddie Freeman. So unless disaster strikes, Triple-A awaits.

Venable just washed out of the Indians’ outfield, which is really saying something. This is a team for which the Opening Day outfield appears to be Marlon Byrd, Rajai Davis, and Tyler Naquin. The only team out there with a sketchier situation in the deep grass is … the Phillies! Venable actually slots in nicely as a left-handed-hitting caddy to either new left fielder Peter Bourjos or Rule 5 selection Tyler Goeddel … neither of whom has particularly exciting upside but together posses downsides that go all the way to the earth’s core.

Of course, Venable is no spring chicken and hardly helped his stock with his performance in San Diego and Arlington last year. As I wrote almost exactly a month ago, he seems to have diminished from a league-average wrecker of righties to a fringe big-leaguer rapidly losing his grip on once-tantalizing speed, power, and glove tools. His OBP is holding on, at least … but if he can’t find a way to return to league-average offensive performance, he could find himself losing playing time to the Cody Asches and Cedric Hunters of the world.

It would be great for everybody involved if I didn’t have to write up another Venable Transaction Analysis for a couple of months at least. It would mean that not only would I not have to struggle to avoid plagiarizing myself, but it would also say that Venable finally found a home where he fits. That’d be nice, because when you can’t hang in either the Cleveland or Philadelphia outfields, the International League is probably the next place you’ll find playing time.

It feels like this is precisely the reason that the Padres inked Kratz to a minor-league deal; the idea all along was to trade him to another franchise in desperate need of a backup catcher. After all, this is a team that already employed former All-Star Derek Norris and two very interesting backstops in Christhian Betancourt and Austin Hedges. The Padres needed another glove-first catcher not at all—Kratz was a superfluous asset designed to bring back something in trade.

Dan Straily is certainly something. Once an interesting and exciting starting pitcher sleeper—it was the Billy Beane sabermetrics magic, don’t be fooled—Straily has become considerably less of both since being traded to the Cubs, Astros, and now the Padres. The good news is that he has gotten his work in over the past two seasons since his 2013 semi-breakout, but the bad news is that almost all of that work has come at the minor-league level. His most recent run in Triple-A last season wasn’t exactly the stuff of legend, but he had a strikeout per inning and showed a low walk rate (4.9 percent) for the first time in his career. The bad news is that he still gave up a boatload of runs, as everything he throws ends up in the air. Hitters tuned him up for a .356 BABIP and a 4.77 ERA in 22 minor-league starts.

I suppose if you’re going to give up a metric ton of flyballs, there are worse places to pitch than in San Diego, where the marine layer suppresses homers. But that presupposes that Straily will actually make it to San Diego, rather than another go-round in the Pacific Coast League. Personally, I think he finds a role at the back of San Diego’s bullpen, where maybe he becomes one of those stories of late-inning success that the Friars churn out on the regular. If not? We’ll always have the 2013, which promised an entirely different set of results than what we saw over the past two seasons.

You need to be logged in to comment. Login or Subscribe
tearecrules
With Jon Singleton being sent down I wonder if anyone will be asking Bud Norris or Mark Mulder about his contract.
Reply to tearecrules
dfloren1
Nice use of the underutilized phrase "on the regular."