The Pirates’ Opening Day lineup in 2015 had Pedro Alvarez at first, Neil Walker at second, Jordy Mercer at shortstop, and Josh Harrison at third. Two of those players, Alvarez and Walker, are gone, and Harrison will move to second base after starting there 67 times in his major-league career (57 last season). Only Mercer at short will be a holdover. Yet despite 75 percent positional turnover, there’ll be a constant: The Pirates infielders will shift a lot.

In 2013—the first year of the Pirates’ three-year run as the top National League wild card—the Pirates were third in the league with 500 shifts, trailing only the Brewers (544) and Cubs (508). (All shift data are from Baseball Info Solutions.) Those three teams accounted for just under half of all shifts in the National League. In 2014 the Pirates led the league with 659, well ahead of the Brewers with 576. Last year, the Rockies zoomed to the top spot in the league in shifting, with 1,011, but the Pirates were second with 971. In 2013-15, the Pirates shifted 2,131 times, 42 percent more often than the next team, Milwaukee (1,502). All by themselves, the Bucs accounted for nearly 15 percent of National League shifts over the past three years.

Of course, this isn’t a secret. The Pirates’ embrace of shifts was a central theme of Travis Sawchik’s book about the 2013 club, Big Data Baseball. He explained how the team used analytics, including shifting, emphasizing groun ball production from pitchers, and getting underrated pitch framers from the Yankees, to end a streak of 20 straight losing seasons. The Pirates, Sawchik wrote, have analysts travel with the team, they teach shifting in the minors, and they have a formerly old-school manager, Clint Hurdle, who’s embraced new ways. They’re the embodiment of the popular perception of Moneyball (i.e., using advanced metrics to squeeze out more wins) more than, well, Moneyball (which was a book about taking advantage of market inefficiencies).

Now, Hurdle isn’t exactly the very model of a modern stathead general. He had position players sacrifice 24 times last year, fifth most in the league. The team’s stolen base success rate of 68.5 percent was fifth worst in the league. He hews to the contemporary bullpen orthodoxy, with closer Mark Melancon entering in the ninth inning or later in all but one of his 78 games and setup man Tony Watson pitching the eighth in all but seven of his 77 appearances. Pirates leadoff hitters had a .325 on base percentage; the league average was .330 and Pirates non-pitchers had a .333 OBP. But yeah, they sure do shift a lot.

And it’s not like they’ve done it with superior defensive personnel. The Pirates were tenth the league in Park-Adjusted Defense Efficiency (PADE) in 2015 and eighth in 2014 after finishing third in 2013. The last time a Pirates infielder won a Gold Glove was Jay Bell in 1993, the first of those 20 straight losing seasons. On last year’s team, the best infielder, per FRAA, was third baseman Jung Ho Kang, and he was arguably playing out of position, having been a shortstop in the in KBO. And in 2013-2015, the team allowed Pedro Alvarez to appear on the field with a glove on his left hand in 378 games.

Projections systems aren’t crazy on the Pirates. Over the past three years, the Pirates have been 42 games better than their PECOTA projection, a total surpassed only by the PECOTA-reviled Royals. There are a lot of reasons that a team can beat its projection, including mundane ones like luck, but in the case of the Pirates, all those shifts are telling.

It’s true that the Pirates aren’t an overwhelming team defensively. But while their team PADE has slipped in recent years, they’ve been a league leader in groundball defensive efficiency: sixth in 2013, third in both 2014 and 2015. Shifts are designed to turn groundballs (and soft liners) into outs. And nobody generates more groundballs than Pittsburgh: They’ve led the league in groundball rate in each of the past three years. During that span, only five teams National League teams have gotten groundballs on over half of balls in play: St. Louis in 2013 (50.6%), Los Angeles in 2015 (51.9%), and Pittsburgh all three years (54.2% in 2013, 52.8% in 2014, 52.2% in 2015).

And those groundballs aren’t an accident, either. Pitching coach/magician/pitcher whisperer Ray Searage has gotten pitcher after pitcher to generate more grounders. A few prominent examples: 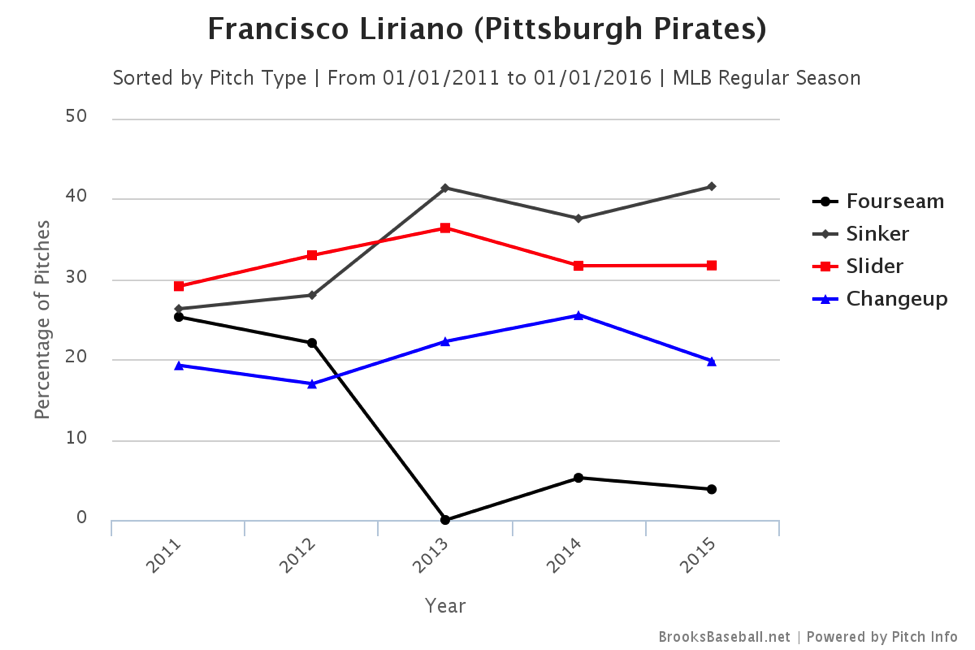 I was going to add a solid vertical line delineating when he joined the Pirates, but I don’t have to. It’s completely obvious. All of a sudden, he junked his four-seamer, emphasized his two-seamer, and became a groundball machine. (Imagine that discussion in Spring Training, 2013. “Hey, Francisco, glad to have you here. Listen, just one thing. That four-seamer of yours? It sucks. Stop throwing it.”)

This pattern, in one way or another, is a hallmark of Searage’s tutelage. With some pitchers, it’s been repertoire. With some, it’s been location. For all of them, it’s been confidence throwing down in the zone, knowing that the pitches are being received by former Yankees Russell Martin (eighth in the majors in Framing Runs in 2013, seventh in 2014), Francisco Cervelli (second in 2015), and Chris Stewart (23rd in 2014, 16th in 2015, both in very limited play).

The Pirates enter 2016 with three-fifths of last year’s rotation gone: Burnett to retirement, J.A. Happ to a free-agent deal with Toronto, and Charlie Morton to the Phillies. Auditioning for the spots behind staff ace Gerrit Cole and Liriano are returning lefty Jeff Locke, who joined Cole and Liriano as the only Pirates hurlers to start 30 or more games last year (albeit less successfully: 4.49 ERA, 3.98 FIP, 4.67 DRA), and three new faces:

· Jon Niese, acquired in the deal Walker deal, whose groundball rate had bounced around in the low 50 percent range until peaking at 58 percent last year

· Juan Nicasio, another sub-50 percent groundball pitcher who’s being groomed for the rotation after spending time in the Rockies and Dodgers bullpens the past two years

(This being the Pirates, highly touted—No. 11 in the BP Top 101—pitching prospect Tyler Glasnow will not appear in Pittsburgh until his arbitration eligibility is pushed back another year. Plus, he’s had only 104 innings above A ball.)

This all fits in with the shifting. The Pirates have pitchers who throw pitches that generate grounders. They position their infielders to turn those grounders into outs.

There are a lot of things the Pirates do right. With Starling Marte, Andrew McCutchen, and Gregory Polanco, they arguably have the game’s best outfield, and in McCutchen, one of its most admirable superstars. The signing of Kang (second on the team to McCutchen with a .294 TAv last year) for four years, $10.75 million and a team option was inspired. They were fourth in the league in runs scored last year despite playing in a pitcher’s park. They’re one of the most analytics-friendly teams in the majors. They’ve compiled the second-best record in the majors over the last three years with a below-average payroll. They play in a fantastic place to see a ballgame. They have cool unis.

And they’ve beat projections. As noted, they’ve won 42 more games than PECOTA projected. Part of that outperformance is run prevention. Over the past three years, the team’s ERA of 3.33 is 0.19 lower than its FIP (third largest differential in the league) and 0.28 below its xFIP (second largest). The Pirates assemble a pitching staff that generates grounders, throwing to catchers that generate strike calls, with fielders that generate outs, not by being outstanding fielders per se, but through outstanding positioning. A lot goes into the Pirates beating their projections. Their persistent shifting is the most visible leading edge.

You need to be logged in to comment. Login or Subscribe
jsdspud
This team outperforms PECOTA because everyone works together. From the FO to the players, they all seem to be going in the same direction. Getting more ground balls from a pitching staff won't mean as much without shifting the infielders. I doubt that Goose Gossage will be hired by this org anytime soon.
Reply to jsdspud
NYYanks826
"In 2013-15, the Pirates shifted 2,131 times, more than twice as often as the next team, Milwaukee (1,502)."

I think the math is off here.
Reply to NYYanks826
mainsr
Whoops. Thanks for catching that, NYYanks826. Went back to my spreadsheet--the numbers for shifts are correct, but I had the wrong denominator for my fraction. The right answer, of course, is 42%, not 100%.
Reply to mainsr