The Braves, as you might have heard, made quite a few trades this offseason. Here, in one convenient table, is a list of all the players they acquired thereby (not including Gabe Speier, who was shipped out of town before he even had the chance to unpack his bags), with columns corresponding to the player’s age during the 2016 season, the year each would qualify for free agency, and the WARP PECOTA expects each to produce before that date.

* Player has not yet made their big-league debut; date listed is earliest possible.

** Player does not yet have PECOTA projections beyond 2016.

Before we continue, a few things to note: first of all, the table assumes that all players not already in the big leagues now will make their debuts in the early part of 2016, thereby reaching free agency as early as possible (in 2022) and limiting the production the Braves project to receive from them. Secondly, players who are projected to produce negative value, on net, are not included in the total projected WARP listed in the bottom right. (Presumably, if a player is performing below replacement level, the Braves simply won’t play them.) Lastly, Ricardo Rodriguez and Dansby Swanson’s PECOTA projections are not included because they, like the limit, do not exist.

All of which is to say that this table presents the most conservative possible projection of the value the Braves have acquired this offseason. If any one of a number of totally reasonable things happen (they don’t rush their prospects to the majors; Dansby Swanson doesn’t turn out to be a nullity) they’ll end up having acquired a great deal more value than the 19.3 WARP we project them to receive here.

Well, here’s the same table, with the same assumptions as we made before, for the players they gave up this offseason. One way to get towards an understanding of if the 19.3 number is “good” is to compare it to the number in the bottom right here:

* Player has not yet made their big-league debut; date listed is earliest possible.

** Player does not yet have a PECOTA projection.

Let’s not be silly enough to believe that we can project things down to a tenth of a win, six years out. We can’t. But we can explore the general implications of the projections we see here, place them in their broader context, interrogate their assumptions, and draw out a few general conclusions. Those conclusions, happily, are pretty good news for the Braves and their fans.

For example, we can be pretty safe in saying that the Miller/Swanson deal was as laughably, out-of-the-box wackadoo crazy as you thought it was. Miller and Speier (the two players headed to Arizona) are projected for 6.5 WARP over the life of their deals, while Inciarte, Blair, and Swanson are projected for 13.1 even if you assume Swanson will produce nothing at all, ever. Basically, for this deal to start to make sense for Arizona you’d have to assume that wins at their spot on the win curve are worth twice as much as Atlanta’s, and that only starts to become possible if you assume that the Diamondbacks are honest-to-god division contenders in 2016. They aren't.

So that’s one thing. Here’s another: the Braves are actively trading wins now for wins in the future, when they’ll reside happily in Cobb County’s SunTrust Park, and that’s a good thing. Again, the specific numbers don’t matter, but the general trend does. Here’s how Atlanta’s projected wins from traded players lined up, by year, before and after the trades went down:

And here’s a chart of that last row, for you visual learners: 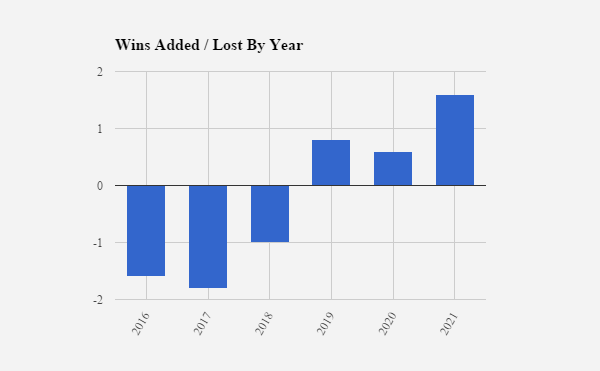 Again, this is all without assuming any future production at all from Swanson, who seems a reasonably good bet to be doing nasty things to baseballs as early as next year, and certainly in the period between 2019 and 2021. And it assumes that Andrelton Simmons will be producing something on the order of three wins a year, until 2020, for the Los Angeles Angels of Anaheim.

But the Braves don’t want the three wins they’d get each year from Simmons in 2016 and 2017. They’d much rather have Newcomb—who they presumably, and not unreasonably, like better than his modest projections suggest he’ll be worth—and run up their loss totals over the next few years (the better to draft at the top of the board). That may not be the most fan-friendly thing to do, and we’d probably all like a collective bargaining agreement that doesn’t incentivize it so completely, but the fact is that it’s the smart thing to do.

In fact, that’s the general theme of the Braves’ 2015-16 offseason: smart. Atlanta traded merely good players for good young players this offseason, and thus got worse in exactly the way the CBA requires them to now in order to get much better later. Thus, even if the numbers are exactly right, and the Braves traded 19.3 wins for 23.8 wins this offseason (which, given all the assumptions we made, seems quite unlikely), they’ll still have done quite well because they rearranged those wins into a timeframe that suited their purposes better. 2016 won’t be easy to watch, but 2018 onwards should be pretty fun … if you can beat the suburban traffic to get out to Cobb County.