They say the triple is the most exciting play in baseball, which is an odd adage to have in a world where inside-the-park home runs exist. There’s a lot to like about the triple—the geometry is cool, with the batter-runner having different starting and ending points, and while inside-the-park home runs are almost always the result of misplays in the outfield, you can get a triple without anyone making a mistake.

But let’s be real—we only say the triple is the most exciting play in baseball because inside-the-park home runs are so rare: Only 11 of the 4,909 regular-season home runs in 2015 failed to leave the park. And since it’s March and nothing’s really going on, let’s rank those regular season (because including Alcides Escobar’s World Series homer would just be unfair) inside-the-parkers.

This is just sad. First of all, Jeremy Guthrie missed his spot by a ton there, and Forsythe should’ve hit that one over the fence. Even so, he made it home anyway, because Alex Gordon, who would’ve held Forsythe to a double, if not a single, collapsed in a heap on the warning track with a groin strain that would keep him out of the lineup for weeks. Even Forsythe pulled up coming around second, unsure of what to do with himself.

This is not wacky or fun or celebratory, and its primary value is in setting up what was to come, as Jarrod Dyson came in to replace Gordon.

Gregg Murphy’s “What was Michael Taylor thinking?” pretty much sums it up. I love that this was a grand slam, and I love the Rhineland Rocket, but in a just world this is a single and a three-base error.

Much the same as the Altherr hit, only Jacoby Ellsbury missed the ball with a little bit more panache than did Michael Taylor. Also, the crowd noise really comes through in this video—as you’d expect, since Rua hit this in front of almost 35,000 home fans who’d been baked into near-delirium during a game whose first-pitch temperature was 101 degrees. When I was a teenager I once spent an entire extremely hot summer day swimming at the neighborhood pool, and when I got home I spent half an hour in the shower and washed my hair four times because I was so punch-drunk from the heat I could barely feel my own face, much less remember whether I’d washed my hair already. I cannot imagine the level of crazy I’d have gone if I’d been shown an inside-the-park home run in that condition.

Contrast that to the level of excitement you’d expect from a Phillies fan on the road last September.

For a catcher, Realmuto runs pretty well. It’s slightly disappointing that the Marlins have a curved wall that faces away from home plate in fair territory, and we came so close to having that wall come into play here, but it didn’t. For that reason, I can’t be too hard on Domingo Santana for just sort of running out of space and not having a plan. He’s on the road in a unique architectural center field, and up against a part of the wall that doesn’t get used that often—he can no more be expected to play that carom correctly than to be adequately prepared for the ball to bounce off a passing bird.

And they make good on Chekhov’s Dyson. This is yet another instance of an outfielder gambling on a diving catch and missing, but the catharsis of it being not only the second inside-the-park home run of the night, but vengeance for the fallen Gordon makes it an infectiously cathartic moment for the Kauffman Stadium crowd.

This was Domonic Brown’s last on-field act as a member of the Philadelphia Phillies, which seems appropriate on a number of levels. That’s all I have to say on the matter. 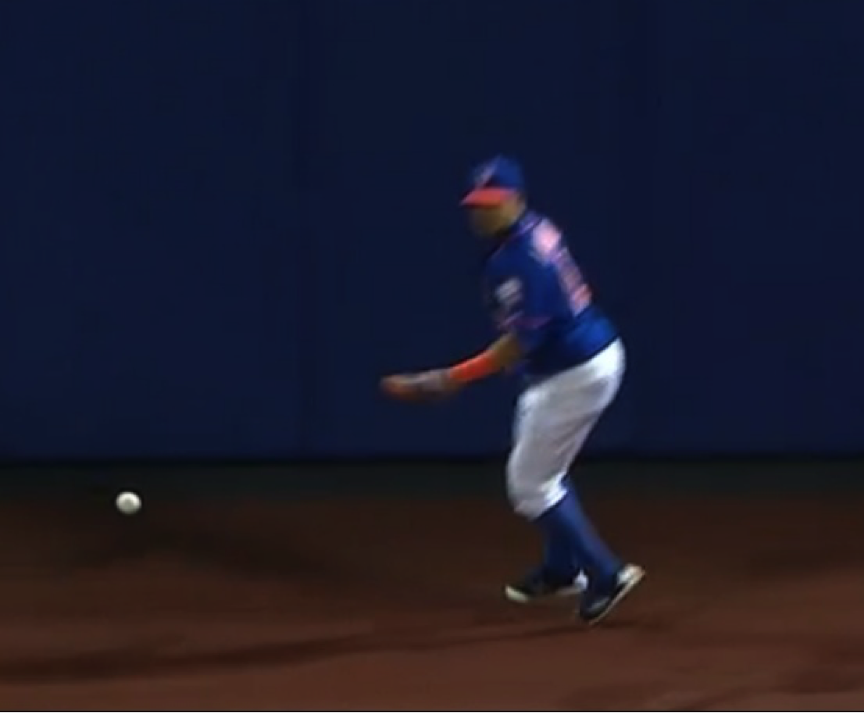 I also particularly enjoy the posture of resignation on Juan Lagares’ face when the ball gets by him a second time. This is the look of a man who’s stepped up to the minigolf tee, nailed the windmill and watched helplessly as the ball rolled past him. It’s a look we can all identify with.

No idea why this isn’t a standalone highlight, but you’ve got to go about 40 seconds into this video to see it. Not only is this McCann’s first career home run, we get a great shot of Twins center fielder Jordan Schafer running the aimless run of a man who knows he needs to go somewhere quickly, but does not know his destination, after which he fails to make the catch and the ball rolls for days underneath the padding on the outfield wall, like a startled mouse, allowing McCann time enough to trundle around the bases and tie the game. This is a great inside-the-park homer.

It’s a tough part of the park to defend, so I’d be a little sympathetic for Corey Dickerson and Carlos Gonzalez apart from two things: First, Dickerson hip-checked Gonzalez like he was trying to set up a punt return without drawing a block-in-the-back penalty. Second, when the two of them got to the ball, they both bent over and looked at it, then each other, like two men standing over a particularly frightening spider, each waiting for the other to kill it and put it in the trash.

This one is slightly farcical: Gosselin lines the ball off a fan who’d left his arm hanging over the wall and a defeated Rafael Ynoa, thinking the ball was in the stands, just sort of slumps down against the fence while Gosselin circles the bases. This was the moment they had to start factoring “apres moi, le deluge” into FRAA.

But this video wins the award for best sound design, from the fact that the home runs interrupts a side conversation about how everyone had beards in the ‘70s to the stadium DJ cranking up EMF’s “Unbelievable” at the end—a masterpiece of pop music that we do not, as American consumers of art, respect nearly enough.

And then, in between, there’s the thud. Ynoa hit the wall with such a satisfying baritone thump I am not completely convinced that a foley artist somewhere hadn’t turned a wooden salad bowl upside-down on a pillow and hit it with a timpani mallet. That thud elevates an otherwise lackluster home run to a different level.

Near-perfection. Larry Granillo of Tater Trot Tracker says this is the fastest circuit of the bases in big league history, at 13.95 seconds. It didn’t depend entirely on an outfielder’s screwup—even though Gregor Blanco booted the ball a little, Gordon beat the eventual throw home by so much I’m not sure it would have mattered. We get the shot of Gordon motoring around the bases, eyes bulging out, helmet falling off in the wind—something Willie Mays totally understood was how cool it looks when a ballplayer’s hat falls off because he’s running so fast. Plus it was his first homer of the year. There’s nothing not to like about it, and it’s clearly the top inside-the-park home run of the 2015 regular season.

You need to be logged in to comment. Login or Subscribe
jfranco77
I have so many thoughts. The Rockies played Corey Dickerson in center field, in AT&T park? Wow. Then later the Rockies played Rafael Ynoa, nominally an infielder, in left field at Chase Field? Sometimes the bear eats you, and you damn well deserve it.

That Domonic Brown play really does sum up the Dom Brown Experience (tm).
Reply to jfranco77
LlarryA
Nicely done. Have you been taking lessons from Sam?

You missed one of the best bits in the Gosselin account. Steve Berthiaume at one point repeats that it's a home run, "and we've got Tacos!". The D'Backs have a promotion with Taco Bell that means free tacos the next day if a certain number of runs (has varied over the years) are scored.
Reply to LlarryA