Gallardo had a three-year pact for $35 million in place with the Orioles until some shoulder issues cropped up in his physical, so the team added an option for that third year at $13 million with a $2 million buyout. If that option is exercised, then the deal would boil down to a three-year pact worth $33 million.

Gallardo is coming off the lowest strikeout rate of his career (15.3 percent), marking the sixth consecutive season in which his K rate has decreased (going back to 2009). The percents have fallen consistently, with a particularly-deep plunge between 2012 and '13, as the K rate has followed a troubling pattern over the past six seasons (percents starting in 2009):

On the bright side, his 2015 home run rate of 1.9 percent was the lowest that it's been since 2010, shaving nearly a full point off of his 2.8-percent rate of home runs allowed from 2011-14. His walk rate has bounced around throughout his career, which along with his volatile homer rate underscores Gallardo's lack of consistency, which takes shape on every level whether looking at his performance on the basis of batter to batter, game to game or season to season. Somehow, Gallardo has put up an above-average ERA in eight of his nine seasons at the highest level, teasing upside as a young player but with a skill-set that's following a downhill path.

Gallardo carries name value that exceeds his actual value on the field, making him a very dangerous commodity in fantasy drafts as well as in free agency. His modest contract indicates that it may have been wise to accept the qualifying offer of $15.8 million for this season before re-entering the market in the offseason of 2016-17, and his insistence on pursuing a multi-year deal in free agency could be an indicator of his own doubt as to the right-hander's multi-year value. The medical red flags only fan the flames of that pessimism.

The fastball use has remained constant while his velocity has dropped a couple of ticks from the peak pitch-speed of five years ago. His velocity is sinking to a problematic zone, particularly in light of the league-wide increase of pitch-speed and the modern infatuation with the radar gun. His breaking pitches also lost effectiveness last season, as indicated by a rate of whiffs-per-swing that dropped at least seven percentage points for both the curveball and slider, this after several years of holding firm around 23- and 33-percent, respectively.

The change-up has always been an afterthought in his repertoire (the pitch was lit in 2015, but his extreme over-the-top arm slot helps to thwart platoon splits – his opponents' slugging percentage and ISO are both within four points whether facing right-handed batters or lefties – as his pitch trajectory exaggerates the vertical plane at the expense of the horizontal. Look at the stats from any of his game logs on www.BrooksBaseball.net and his release-point cloud looks like the base of a cumulus, running flat and directly above his head.

There aren't many pitchers with F-grade mechanics who survive long at the big-league level, but Gallardo has been cruising along for nine years of major-league service time. His statistical inconsistency and volatile stuff are both rooted in mechanical inefficiency, and his walk rate is really a poor proxy for pitch command given the extreme nature of his over-the-top approach. Gallardo has almost the maximum imaginable amount of spine-tilt at release point, “earning” a bottom-feeding posture grade of 20 that has been present since the day that he came up from the minors.

Spine-tilt has been identified as a precursor to shoulder injury, so with Gallardo's medical red flag was related to his throwing shoulder there gains a more ominous tone with the severity of his spine-tilt. Such pitchers tend to lose velocity quickly, as Gallardo has already demonstrated, further cementing the link between shoulder-health and generating power. His arm slot is nearly straight over-the-top, such that his mistimed pitches tend to miss high or low rather than inside or outside. It's easier to generate strikes on pitches that miss above or under the strike zone, allowing Gallardo to get strikes even when he misses his target, but the reality of his extremely volatile walk rate underscores the inconsistency of his release point. 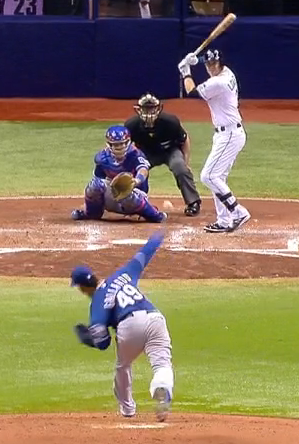 The right-hander has solid power, including above-average momentum, and his torque is generated by big hip rotation to find an open stride at foot strike in addition to a large upper-body load. However, the close proximity with which he fires hips and shoulders turns what could be massive torque into that which is merely above average. Like many open-stride pitchers, the degree of hip separation that is necessary for him to achieve foot strike often begins the upper-half prematurely, resulting in mistimed pitches and missed target.

The Verdict: A Poor Allocation of Resources

This deal made more sense when it was thought that Baltimore was also signing Dexter Fowler, but his surprise signing with the Cubs to stay in Chicago effectively meant that the Orioles gave up their first-round pick in this year's draft, a top-15 selection, to acquire a busted pitcher with a penchant for surrendering homers in an environment that is unforgiving to such transgressions. Throw in the fact that this is a team with a shallow farm system and a history of high-end draft picks that end up in the bullpen, and the decision to sign Gallardo is left with little in the way of upside but several ways that it could go wrong.

You need to be logged in to comment. Login or Subscribe
mockcarr
The verdict is weak. They're spending money - particularly on offense, and don't have many options in their rotation if they want to compete. I suspect whatever issues Gallardo presents for future decline and injury are no worse than settling for the presumed starters who follow Gausman. Their best pitching prospects like Harvey and Bundy are damaged goods. They'll need to maximize quality innings in the near future and Gallardo's career ERA/FIP numbers are pretty solid in two hitters' parks. How many guys are there laying around who can give you 180+ above-average innings for 11 million a year?
Reply to mockcarr
tombores99
"Do not agree" is not equivalent to "weak." A weak verdict would theoretically lack rationale (or be filled with phrases like "I suspect"), but my analysis falls under neither category. You're welcome to disagree with said rationale, but let's leave the propaganda at home. Thanks for playing.
Reply to tombores99
tongonation
Gallardo was awful last year, posting a 1.41 WHIP, which as you probably realize is simply atrocious, and a FIP far in excess of his (mostly meaningless) ERA. His k/9 has dropped steadily since 2012 to 2015 from 9 to 5.9, and his last "180+ above average innings" were probably in 2011. Gallardo is simply a bad pitcher, on his way to being a worse pitcher, and this much money for him is an utter waste. For the Orioles to not have pursued any of a half a dozen other options for their rotation, from multi year guys who are actually good or one year guys with upside potential like Latos or Fister is embarrassing. If the excuse is that they were on hold pending the Davis signing, that is simply evidence of the incompetence of the from office, or the danger of having an owner that keep a foot int he front office machinations. Baltimore ownership and/or management has basically fiddled while Baltimore burned this off season. If your formula for winning (particularly in a highly competitive AL East) includes banking on Yovanni Gallardo for a meaningful contribution, you need to rethink your baseball stoichiometry.
Reply to tongonation
tombores99
...and now for something completely different!
Reply to tombores99