For the better part of three years, Matt Carpenter was saddled with the unfortunate label of being “more valuable in real life than in fantasy baseball.” This is one of many articles that utilized the phrase. He proved to be one of the premier hitters in Major League Baseball—in terms of plate discipline, approach, and batting average—but that didn’t necessarily translate to standard fantasy leagues because it didn’t come with average power production.

After clobbering 28 home runs in 2015, though, the narrative has suddenly changed. Carpenter didn’t come close to a .300 batting average, as he had in the past, but more than made up for it with homers and an increased number of RBI. All of this created an easy top-10 profile at third base with the potential for some growth. If the power boom is legitimate and he can somehow climb his batting average back to near-elite levels, Carpenter is a fantasy gold mine.

Of course, that’s a lot to ask—especially when we consider the fact that he’s now 30 years old and seemingly made the conscious choice to trade power for average. By this, I mean the data indicates that he chose to expand his preferred zone in 2015 to increase his home-run production. Not that fantasy owners mind, but such a decision likely had deleterious effects on his batting average.

Coming into the 2015 season, take a look at his heat map, focusing on Carpenter’s tendency to offer pitches at the belt or away from the four corners of the strike zone. 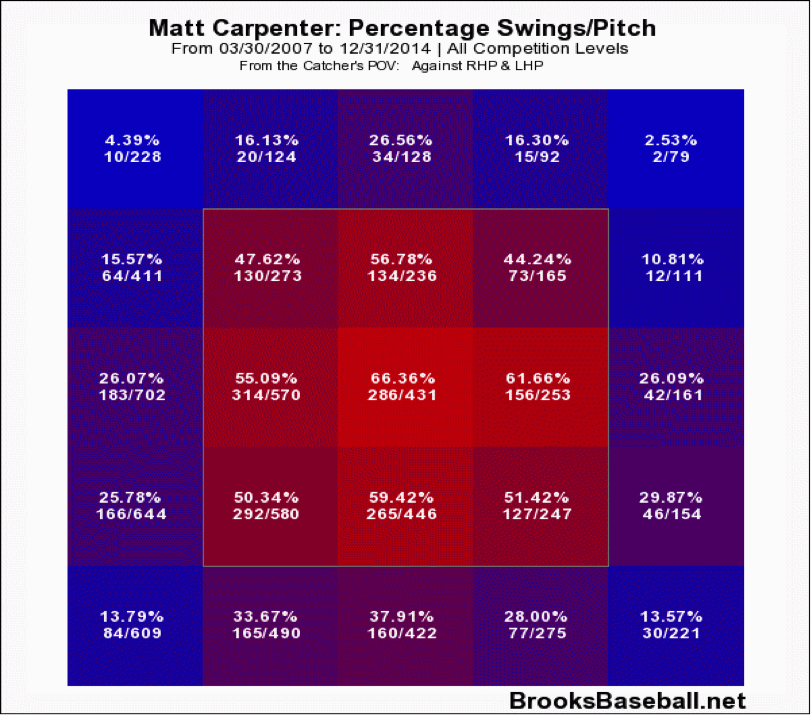 The Cardinals’ third baseman clearly has a keen eye and a great approach at the plate. That passivity, though, if you want to call it that, seemed to prevent him from hitting for power. It’s difficult to make the assertion that Carpenter didn’t launch a ton of home runs because he focused on too good of pitches; however, it’s more that he was concerned about not making outs, shortening his swing and lacing doubles.

That philosophy suddenly changed in 2015: 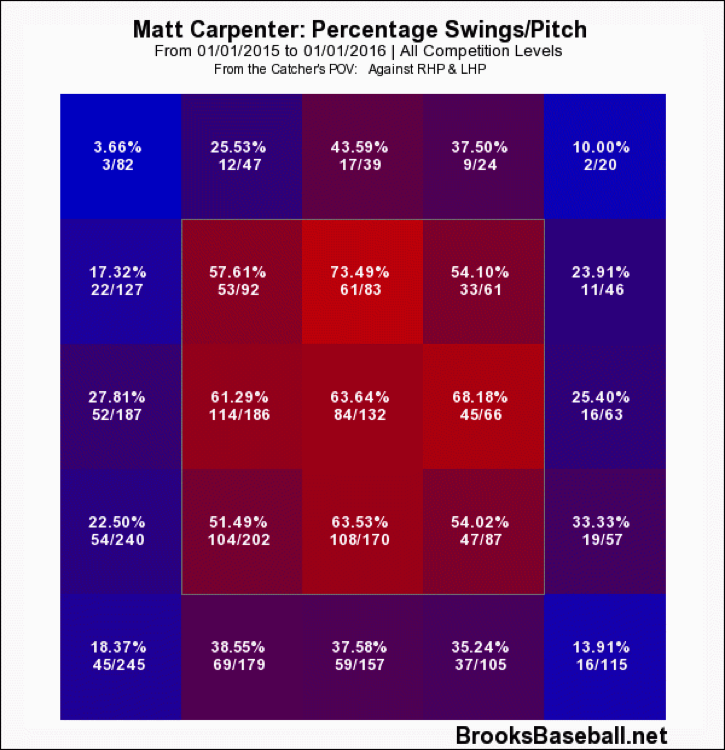 If the 30-year-old carries over this new approach, he’ll be one of the top six or seven third basemen, as he was a season ago. If he can somehow blend his pre-2015 approach with his 2015 power surge, it could be something really interesting and productive in fantasy leagues. That is purely speculative, sure, but fantasy baseball is about speculating on possible improvement. It’s about identifying core skills—such as a history of quality contact and quality home-run power—and hoping that they can somehow mesh together.

Carpenter is clearly below the top tier of third basemen; however, among the next group, he’s one of the brightest options. It’s not all about the power surge from 2015. It’s about the cumulative package and the fact that he’s shown over the past three-plus years that he’s close to being an in-prime-Victor-Martinez type of player—one of my favorites from the past decade.

You need to be logged in to comment. Login or Subscribe
rouse72
Carpenter qualifies as a second baseman in many leagues. How would that affect how you see him?
Reply to rouse72
terrellmiller
just wondering...did Carpenter start getting shifted a lot more? The MLB "Three True Outcomes" rates all spiked last year, I'm thinking a lot of batters are maybe adapting to extreme defensive positioning with the mindset that "they can't defend against either a walk or a homer, and striking out is a lot better than a GIDP".
Reply to terrellmiller