There are five phases of baseball: Pitching, defense, hitting, baserunning, and a certain breed of sportswriter concern trolling fans by pretending that the game is dying because it gets worse TV ratings than football.

This is a red herring, because comparing baseball’s TV ratings to football’s, in 2016, requires going through several causal filters and discarding the irony of newspapermen using TV ratings to predict the death of a cultural institution.

But baseball might actually be dying, just for different reasons. Let me share with you a line graph and a one-sentence quote that keep me up at night.

These are the major-league averages in hits and strikeouts over the past 100 seasons, courtesy of Baseball-Reference. 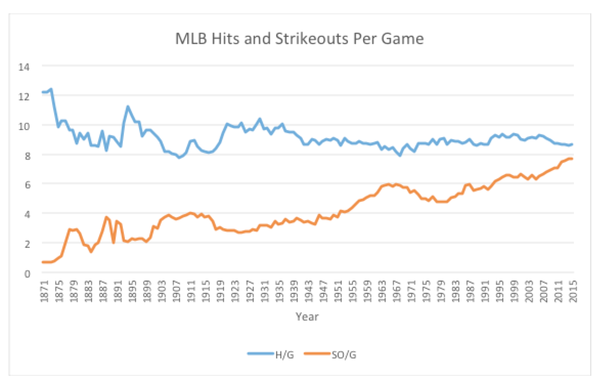 And here’s something Joe Sheehan said on the Will Leitch Experience podcast on July 14, 2014.

“We’re about two years away, at current paces, from strikeouts being more common than hits of any stripe.” Sheehan’s got about half a season to close a pretty big gap, but the sentiment is still terrifying.

This is the evolution of baseball toward tactical optimality. Pitchers are throwing harder and walking fewer batters than ever, as DIPS theory has dictated the course not only of sabermetric analysis over the past 30 years, but scouting and player development as well. We know that pitching to contact gets you fewer outs, on the whole, than trying to miss bats, even if you institute radical defensive shifts that turn batted balls into outs at greater rates than conventional defenses.

Meanwhile, offenses are on the downslope of a cyclical trend in stolen base attempts per game. 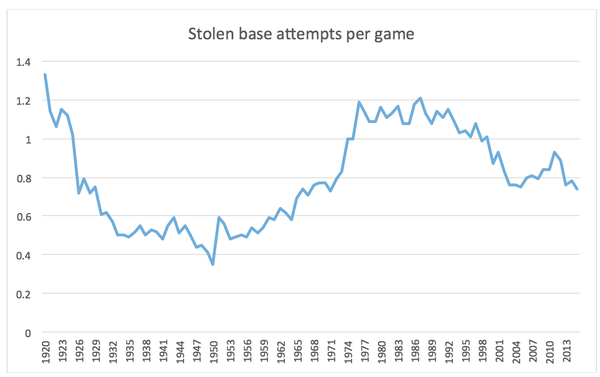 At the same time, we’ve realized that the best way to score runs is not to put men on and move them over, it’s to hit home runs, while no real effort is being made to cut down on strikeouts on the offensive end. It’s not necessarily great news that Mike Trout, Nelson Cruz and Chris Davis all struck out 150 times or more this year, but their teams will live with it because they all managed to hit at least 41 home runs with a better-than-average OBP.

The sum total of all of these things is that baseball is trending toward an ideal tactical state, in which as many at-bats as possible end with the ball either in the seats or in the catcher’s mitt. Pitchers who throw hard and rip off absurd breaking balls are exciting, as are home runs. But this tactical ideal is short on confrontations between runners and fielders—including stolen bases—as well as turning more batted balls than ever into outs. The goals of both the defense (strikeouts) and offense (home runs) require the participation of only three of the at least 10 men on the field, and requires none of them to exhibit the kind of running-and-jumping form of athleticism that is most often on display in other sports.

This is not absolutely a less-entertaining form of the game, but baseball right now is at a record low in terms of action and necessary relative athleticism, because you need less and less of both to win.

I’m hardly the first person to realize this—Sheehan went on in that conversation to explore the topic in depth, and a turn-of-the-century Bill James essay warned against combating the offensive explosion of the late 1990s with remedies that would lead to more strikeouts, for precisely this reason.

This would be troubling and interesting on its own if the exact opposite thing weren’t happening in basketball for the exact same reason.

That you’d want to shoot either from as close to the basket as possible or from a spot that gets you more points is the kind of Eureka moment that led to the 2002 Oakland A’s getting a book written about them for realizing that it’s bad to make outs. But it’s true, and when NBA teams started to figure it out, this is what happened. 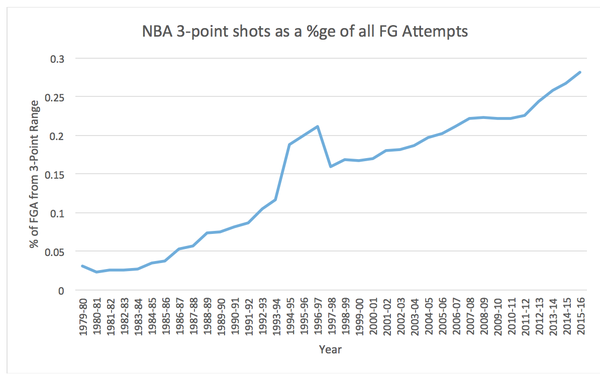 NBA teams now shoot threes eight times as often as they did when the line was first introduced in 1979. In order to open up dunks and three-pointers, we’ve seen a whole host of other changes in the game over the past 20 years, almost every single one of them trending toward a faster, more open game in which passing and ball skills matter more across the board and traditional positions matter less. The NBA has also changed the rules regarding zone defense and hand checking, but the pass-heavy, well-spaced, positionally fluid offenses run most notably by the Spurs and whatever team LeBron James is on at the moment are the result of innovation and the increasing demand that NBA players be both skilled and athletic. Though the pace of NBA games is currently below historical norms, we’re still seeing a more active, fluid game now than before.

Just as there must be people who like watching a third of batters strike out, there must be people who’d love for the NBA to go back to seeing Charles Oakley and Horace Grant brick 12-footers and beat the hell out of each other. But on the whole, adapting tactics to optimize scoring (and, by extension, winning) has also optimized the aesthetic appeal of basketball through the same process that has made baseball less exciting and less athletic than ever.

As far as basketball fans are concerned, this is fine. But for baseball, the century-long, seemingly inexorable increase in strikeout rates will soon present a fatal threat to the game as a form of entertainment, if it hasn’t already.

The authorities that govern other sports have been more willing to tinker with the mechanics of the game to keep entertainment levels high. The NBA added a shot clock to combat slow-down tactics, while the NHL cracked down on interference and opened up the neutral zone to keep the trap from turning hockey into Red Rover on ice.

Organized baseball tends not to do this, and when they do change the rules to offset historical trends, it tends to be in service of offense or defense in gross terms. The problem with baseball isn’t that it’s too low-scoring—scoring in baseball has been historically cyclical, and the game can be as entertaining at 2-1 as it is at 11-9—it’s that there’s an insufficient incentive to put the ball in play.

Though as baseball brings in record revenue, there’s also an insufficient incentive to change the way things work. As much as people who stay up nights thinking about sports at all might lose sleep over this kind of thing, strikeouts probably won’t literally kill professional baseball as we know it. The point is that sports are an entertainment product as well as a zero-sum competitive endeavor. Some sports are lucky enough that the goals of winning and entertainment are achieved through the same means. Baseball isn’t one of them.

You need to be logged in to comment. Login or Subscribe
lipitorkid
I know this wasn't the intent of your article, but I'm sure you thought of it: what are the top two ways you would fix this slide?
Reply to lipitorkid
michaeljbaumann
I've thought about it but I haven't come up with an answer, because I'm not sure how you legislate making pitchers easier to hit without those hits turning into home runs. Maybe raise the seams on the baseball a little or otherwise deaden the ball somehow? I'm open to suggestions because I really don't know.
Reply to michaeljbaumann
LWendt
Pushing back and raising the fences would help decrease home runs, while also increasing other types of balls in play because the fielders have more ground to cover. I'm not sure how much room there is in the current set of 30 ballparks for these kinds of changes, however.

One other (much more drastic) change could be switching to artificial BBCOR-like bats. I assume those could be deadened so that they perform worse than the wood bats. Maybe if they were made light enough, hitters would be able to make more contact and strike out less as well.
Reply to LWendt
Scartore
One thing they could definitely do is call the damn strike zone consistently. Another thing Joe Sheehan pointed out in his newsletter last year i believe is that a lot of players who we used to project as pretty good hitting prospects are floundering in the majors because MLB umps have a ridiculously huge strike zone compared to what they learned in the minors. You want to let singles hitters back into the game? Make the slider monster relievers actually throw real strikes.
Reply to Scartore
jmorrison9999
Great article! Personally, I dislike the way modern MLB teams accept strikeouts and play long ball with their hitters. I'm curious if you think that the Royals success over the last two years will make teams pause about how often their "hitters" are striking out? The Royals struck out less than anyone, had a great BABIP, and seem to value hitters who put the ball in play and were near the bottom of the MLB in home runs hit. I'm just a fan of baseball and I love the way the Royals offense works; I'm hoping teams shift to this type of game instead of playing home run or strike out on offense.
Reply to jmorrison9999
kmostern
Is it actually possible that two years into the period when the 45-4 Warriors have broken basketball with small speedy lineups, unprecedented three point shooting and dramatically more assists per game than any other team you cited the slow paced, defense heavy Spurs and Cavaliers as your examples of basketball changing? I mean, I realize you're making a point about baseball, but geez.
Reply to kmostern
swarmee
I think the scale on your y-axis in the basketball chart is labeled incorrectly. Instead of 0.3 %, it should probably be 30.
Reply to swarmee
smitty99
Baseball dying due to (whatever) is nothing new. Small rule changes or changing the strike zone a little can have a pretty large effect on offensive production and number of strikeouts. Back in the sixties, they changed the strike zone a little and the hitting went downhill. They started changing things in the late 60s and continued to do so and offense made a comeback.

Reply to smitty99
anome8
Among my very favorite things about baseball is that they don't change the rules every year. Change that and baseball will die faster because its sense of permanence and history is a large part of what sets it apart from all other major sports.
Reply to anome8
Deadheadbrewer
And a big problem for my interest in watching an actual baseball game is that there are fewer and fewer athletic "events" in the average game, and yet the time of the game is not decreasing. There are fewer and fewer hits and stolen bases, but I have to sit in the park longer now to see "less" baseball. It used to take 2:30 to see a 5-4 contest with 17 combined hits and two stolen bases, and now it takes over three hours to see a 4-2 game with 14 hits and one steal.
Reply to Deadheadbrewer
thepete39
Can you provide a link or reference to that Bill James article you mentioned?
Reply to thepete39