Ray Searage wants to stay with Pirates beyond 2016
Next offseason’s free agent pitching market might pale in comparison to the bonanza that teams were treated to over the past couple of months, but the market for pitching coaches could feature a marquee name.

Ron Cook of the Pittsburgh Post-Gazette wrote Sunday about the value of the Bucs’ pitching coach, Ray Searage, who is widely regarded as one of the game’s best teachers, able to extract maximum value out of arms who come to the Steel City with middling reputations. General manager Neal Huntington is able to rummage through the bargain bin, confident that every pitcher he finds will exceed expectations because, as Cook put it, “Ray will make him better.” But Huntington is only guaranteed that comfort for one more year, because Searage’s contract expires at the end of the 2016 season.

Fortunately for the Bucs, Searage told Cook that, given his druthers, he’s not going anywhere. The 60-year-old’s preference is to stay with the Pirates for the rest of his coaching career. And since every boss likes employees that make him look good, it stands to reason that Huntington will want him back.

Besides mutual interest between the two sides, the Pirates can also offer continuity in the dugout. Manager Clint Hurdle is signed through 2017 with a club option for the 2018 season. Searage has been the Pirates’ full-time pitching coach since Hurdle was hired in November 2010.

On the off chance that the Bucs don’t reach extension terms with Searage over the next eight months, he would be one of the hottest names on the market next winter. And given the attention paid to every Pirates’ pitching acquisition—warranted, even for the likes of J.A. Happ, because of Searage’s ability to transform them into quality assets, both major-league and fantasy—there would be plenty of eyes watching intently to see where he lands.

Pitching-coach contract terms are seldom publicized, so it’s difficult to peg exactly what sort of compensation Searage would seek. He has the credentials to be the league’s highest-paid instructor, though, a title that’s currently believed to belong to Mike Maddux, who went from the Rangers to the Nationals in early November.

Orioles eyeing Andrew Cashner
If the season started today, Buck Showalter’s starting rotation would likely feature Chris Tillman, Miguel Gonzalez, Ubaldo Jimenez, Kevin Gausman, and Mike Wright. Dylan Bundy could be a rotation option at some point this season, but he can’t yet sustain a full season’s worth of innings. The O’s claimed Vance Worley off waivers from the Pirates in October, but the out-of-options right-hander lost his job in the Pittsburgh rotation mid-2015.

If that sounds like an uninspiring group to you, well, it seems Dan Duquette agrees. According to MASN’s Roch Kubatko, the Orioles are combing the trade market for starting pitchers, and they appear to have found one they like. The Padres, in the midst of a rebuild after going for broke in 2015, could part with Andrew Cashner, a free agent after the coming season, and the righty’s ability to generate groundball contact could play well in Camden Yards.

Health was finally on Cashner’s side in 2015, allowing him to clear 30 starts for the first time in his major-league career. It did not, however, help the 29-year-old to perform up to his previous standards. Our advanced metrics weren’t fans of Cashner’s last year, registering a 4.86 DRA and a 104 cFIP that doesn’t portend much better things to come. A jump in Cashner’s walk rate, from 5.7 percent in 2014 to 8.2 percent in 2015, more than offset the 2.1-percentage-point hike in his strikeout clip, leaving the Padres with a below-average starter.

Nonetheless, Cashner has the stuff to survive in a hitter-friendly environment like Oriole Park, and the O’s might find an intriguing buy-low opportunity. Cashner and the Padres avoided arbitration with a one-year, $7.15 million pact, the righty’s final pre-free-agency paycheck. He’ll join a Stephen Strasburg-led market net winter and could benefit from the relative paucity of mid-rotation starters available with a bounce-back campaign in 2016.

Rafael Betancourt could opt to retire
Rafael Betancourt turns 41 in late April, and 40-year-olds coming off of 6.18 ERA seasons don’t often land major-league deals. Per SB Nation’s Chris Cotillo, that might spell the end of the line for the former Indian and Rockie, who will only come to spring training this year if he’s assured of a big-league job.

One of the select pitchers who’ve learned how to navigate the thin air at Coors Field, Betancourt brought his exquisite control to Denver and posted a sub-3.00 ERA in back-to-back seasons. His K:BB ratio in 124 2/3 innings between 2009-2010 was 162-to-16, and two of those 16 free passes were intentional. Betancourt succeeded in the perilous conditions by utilizing a fastball-driven repertoire, 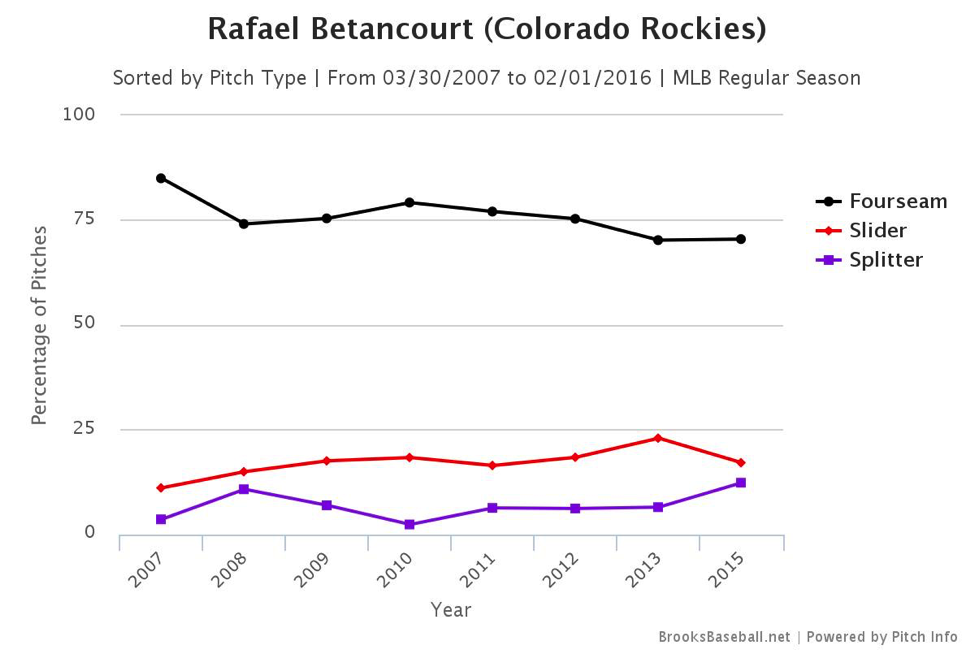 the same trait the Rockies sought when they obtained Jake McGee from the Rays last week. Now, McGee is in line to supplant him in manager Walt Weiss’s late-inning crew.

Age has taken its toll on Betancourt, who underwent Tommy John surgery in September 2013, but he was far more effective last season than the superficial metrics might suggest. That 6.18 ERA belied a 3.98 DRA and an 88 cFIP, which could’ve been enough for teams to look past the dreadful surface numbers if Betancourt’s age began with a digit less than four.

If this is indeed the end, Betancourt will hang ‘em up having posted a cFIP of 93 or lower in all 12 of his major-league seasons.