Last March, I dove to some depth into the question of what distinguished the typical plate appearance in 2014 from the typical one in, for instance, 2004. Because of the changes the game has undergone over the past decade—the ever-expanding strike zone; the steady rise in global strikeout and groundball rates; the not-so-steady, violent rise in average velocity; changes in the way teams use and evaluate pitchers; and others—it was a unique time to explore that issue. Never had the particular progression of expected production based on count shifts changed quite the way it did. Offense across baseball sagged to a fairly cataclysmic low in 2014, so it made sense to look for reasons, and as it turned out, a lot of the reasons had to do with the frequency of reaching certain counts and with the production batters managed once they did so.

In 2015, offense bounced back. It’s not, by any means, restored to the heights of the mid-2000s, but after runs appeared to be on the brink of extinction for a short while, they were more like a protected species last year. In the second half, especially, hitters began to regain some of the (considerable) territory they had ceded to pitchers and defenses over the previous five years. And as it turned out, a lot of the reasons for that, too, traced to the way counts progressed (or, quite often, didn’t). Let’s explore a few of those shifts.

First things first, the first pitch. I’ve written about this a lot over the months since that article. I noted last March that batters were doing better than ever, relative to their overall production, when they put the first pitch in play. That was true again in 2015: 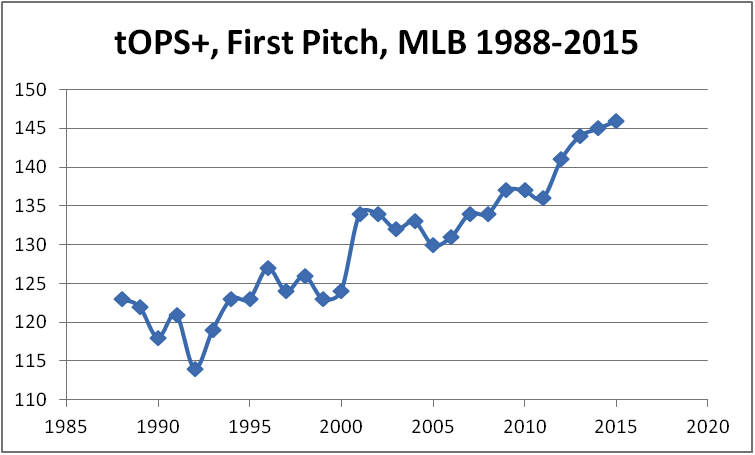 Whereas the frequency with which batters actually put that first pitch in play had been sitting at its all-time nadir for the last five years, it rose last season: 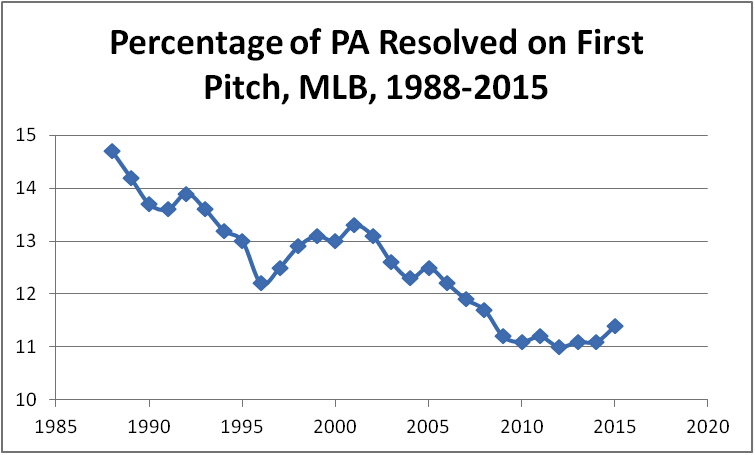 Of course, as one of the articles to which I linked above discusses, hitters achieved that higher number of first-pitch hits, in part, through greater first-pitch aggressiveness—swinging at 28.9 percent of first pitches, up from 27.4 percent in 2014. Obviously, the more one swings at the first pitch, the more likely that the count moves to 0-1. Yet, in 2015, batters were actually slightly less likely to reach that count. It happened 49.5 percent of the time, down a tick from 2014 (though still higher than in any previous season). In other words, batters weren’t indiscriminately more aggressive on the first pitch; they picked their spots better, too.

Falling behind 0-1 was a bit less costly in 2015 than in the two previous seasons, too: 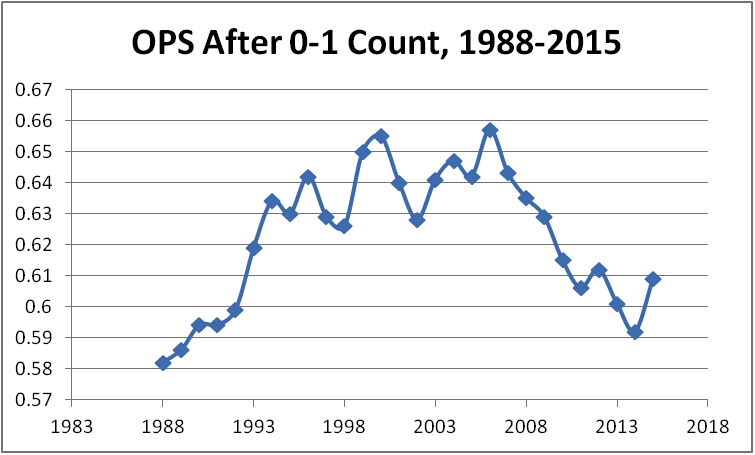 We’re not talking about a return to the halcyon days for offense; we’re just talking about an escape from the soft contact and low octane of the late 1980s and early 1990s. The same goes for batters who got ahead in the count, 1-0 (though that was a relatively rare occurrence, happening less often than in any season except 1996). 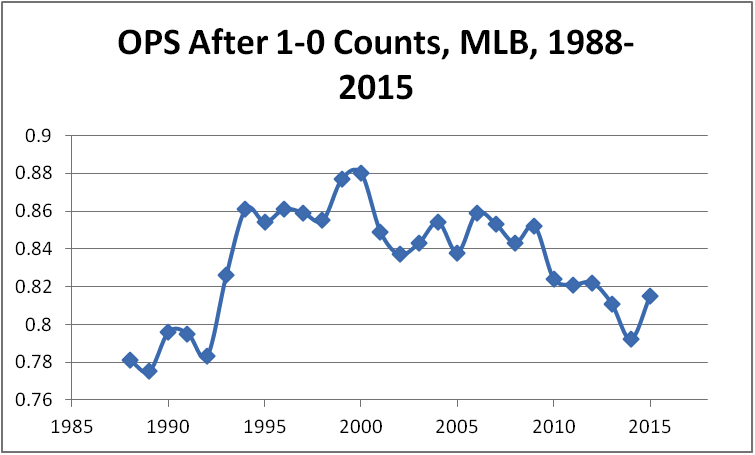 I’ll stop hitting you over the head with Excel-generated charts, but the same thing holds true for 1-1 counts, at least on an absolute basis. Batters had a .654 OPS after 1-1 counts in 2014; that climbed to .669 in 2015. They were actually worse, relative to their overall performance, but reaching a 1-1 count was a bit less damaging to a hitter last season than in the one before. Here’s the twist: Once that 1-1 count came, it was moving day. Batters who waited, paid for it.

Obviously, the same can be said for taking the first pitch: Even being ahead 1-0 was good for just an .815 OPS, down from .900 on the first offering. The same can be said, too, for taking an 0-1 pitch: evening the count would still leave you in worse shape than putting that pitch in play. Using the overall numbers as a guide is insufficient, for obvious reasons. Batters are taking most of those pitches that put them at a disadvantage because, if they did swing at them, only bad things would happen. The good things achieved on all those first pitches and 0-1 pitches and 1-1 pitches put in play are a selected sample, the set of pitches batters felt good about pouncing on (and that they didn't swing and miss at when they pounced).

At the same time, the danger in letting counts get too deep is very, very real. The league made contact on a lower percentage of their swings in 2015 than ever before (76.9 percent). The league’s strikeout rate, once the count reached two strikes, was higher than ever before (40.5 percent). Even 1-1 counts signaled a 25.2 percent chance of an eventual punchout, the highest ever, and (if you think about it) a pretty alarming number. Pitchers are stilling throwing harder than ever, pounding the zone as well as ever, aiming for the bottom of that zone as well as ever. Tom Verducci wrote an article a couple years ago, blaming (more or less) hitters for the rising strikeout rates and falling offensive levels across the league. He said they were too passive, and were missing opportunities. That article was deliberated over at length, but found wanting. As of the end of 2015, it’s clear that Verducci was (more or less) exactly right. Offense remains light, but insofar as there’s evidence of a turnaround, that turnaround is coming almost completely from increased aggressiveness. As unfortunate as it is that batters have no recourse other than to get swing-happy, and as nice as it might be to see the league get on base more often, for now, the best counsel hitters can get seems to be: swing early, and don’t miss.