Every year, tens of thousands of technology enthusiasts descend on Las Vegas for the world’s largest trade show. Across 2.4 million square feet of exhibitor space, attendees will find displays by massive tech companies like Samsung or Sony, small startups in a section called Eureka Park, and everything in between.

With the introduction of Statcast this past season, baseball and technology are even more closely linked now than ever before. With that in mind, we wanted to see how baseball was represented in ways big and small at CES this year. Below you’ll find some quick highlights, and perhaps a glimpse into the future of the game.

Major League Baseball commissioner Rob Manfred co-hosted a panel with NBA commissioner Adam Silver on the role of tech in sports. Manfred touched on several key topics, including instant replay and the implementation of Statcast at MLB parks. More detail from Manfred’s talk can be found in Richard Justice’s report from the event.

Manfred also made a big announcement—that MLB had reached an agreement to broadcast MLB games in China, Hong Kong, and Macau. The deal, signed with Chinese company Le Sports, will broadcast more than 100 games per season in China with Mandarin-language announcing. The deal includes major events like the All-Star Game, the Home Run Derby, and all World Series games. Ed Baig from USA Today has more details on the landmark agreement that could potentially expose MLB to more than a billion new fans.

Easton’s booth presence focused on their Power Sensor, developed in partnership with Blast Motion. The power sensor is a swing tracking device that captures raw data about your swing and sends it to your smartphone in real time. It can also take slow motion video of your swing, allowing you to marry raw data to video, so that training can be enhanced.

The first step is to take a swing:

Then, data from your swing is pulled into your smartphone for display: 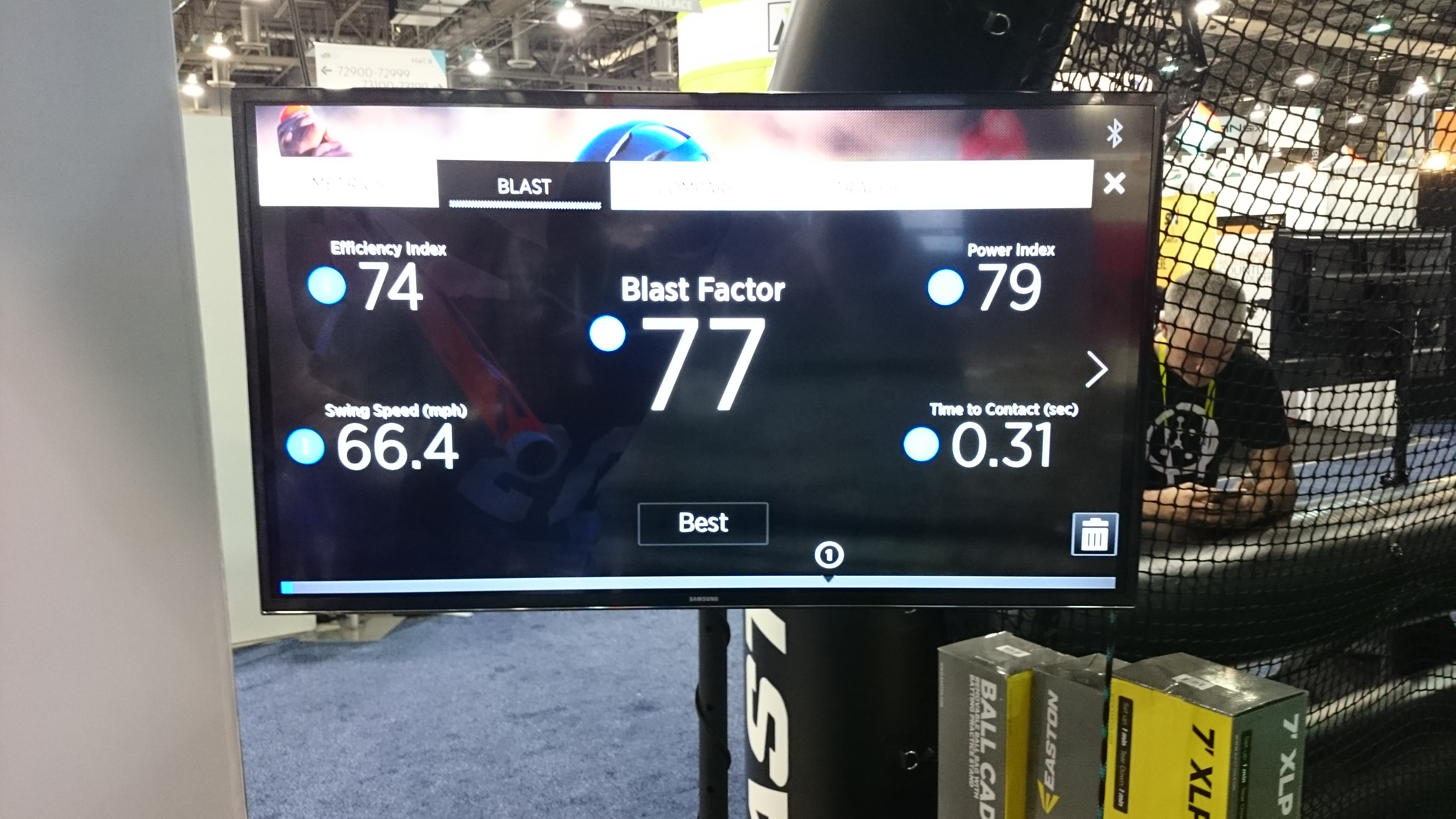 The app provides plenty of raw data like swing speed, time to contact, and angle of attack, but it also rolls up all the data into some easy-to-understand round numbers on a 0-100 scale. Blast factor, for example, is one clean takeaway number to give you a rough idea of how your overall swing is. The guys in the booth told me that 75-85 was the range for elite high school/collegiate players, so I’ll take it!

Easton also had their Mako Torq bat at the booth, and I got a chance to swing it a few times (see the video above). The bat has a handle that can freely spin where the hitter’s bottom hand is, allowing him to better square up the barrel in the strike zone. We hope to be talking to Easton about this in more depth in the coming months, but for now you can learn more about the technology here.

The company that has earned recognition in the baseball world for its pitching-arm tracking technology is broadening its portfolio with new products this year. Motus will be launching a batting glove that incorporates its newest tracking device to provide information on swings. This device, unlike most swing sensors, isn’t attached to the bat, providing a unique look into the swing that could set Motus’ offering apart from other competitors. Below is an image supplied by the company showing the placement of this new sensor: 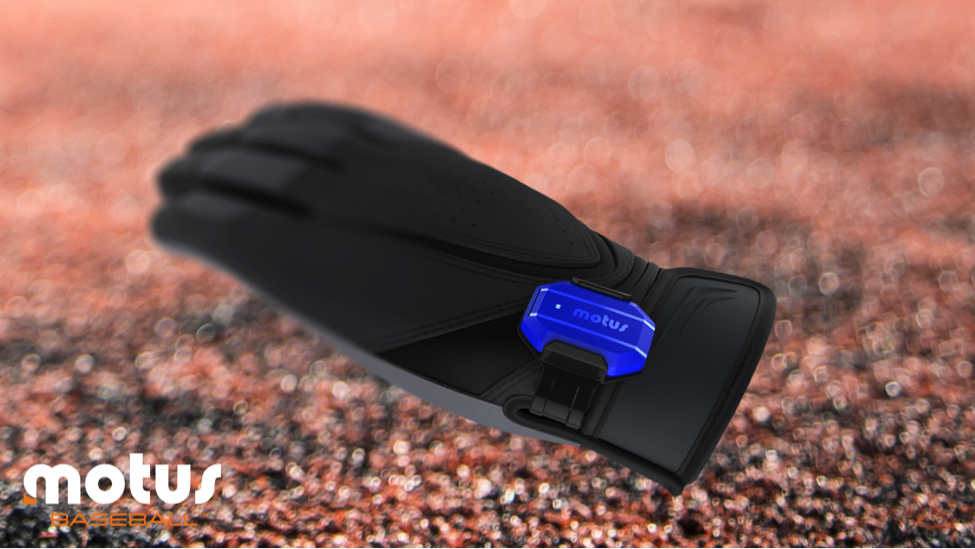 The biggest piece of innovation in this new announcement is that the same sensor can be used for pitching, as well as batting. So one Motus sensor will work for both disciplines. Motus is calling the components of the system motusTHROW and motusBATTING. The whole system together is simply dubbed motusBASEBALL. The whole system is set to retail for $150, and should be available by spring.

Baseball tech isn’t of course limited to baseball companies. Easton partnered with Blast Motion to build their sensor, and Cambridge Consultants is another sensor development company. Their product, Spartag, can be leveraged on a variety of diffrerent sports' equipment, and provides similar data output to Easton’s product. Think of them less as a competitor to Easton and more as a provider of sensors to the baseball companies who might build a product like Easton’s Power Sensor.

The Sportag booth showcased how the technology takes the raw data and converts it into something the player can use. The images below showcase the progression of the data from raw to a finished product: 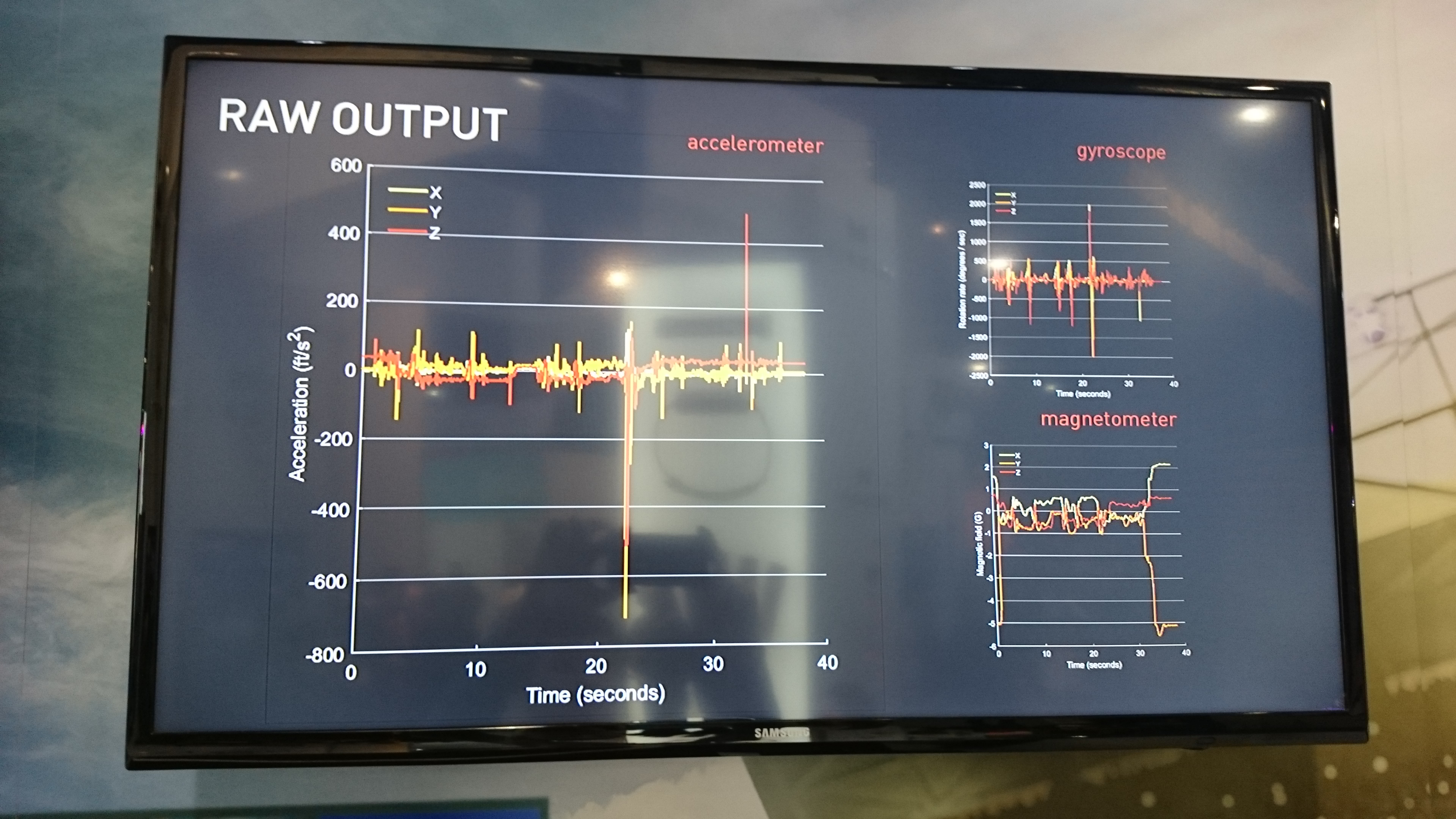 Raw data displayed by the accelerometer, gyroscope, and magnetometer. 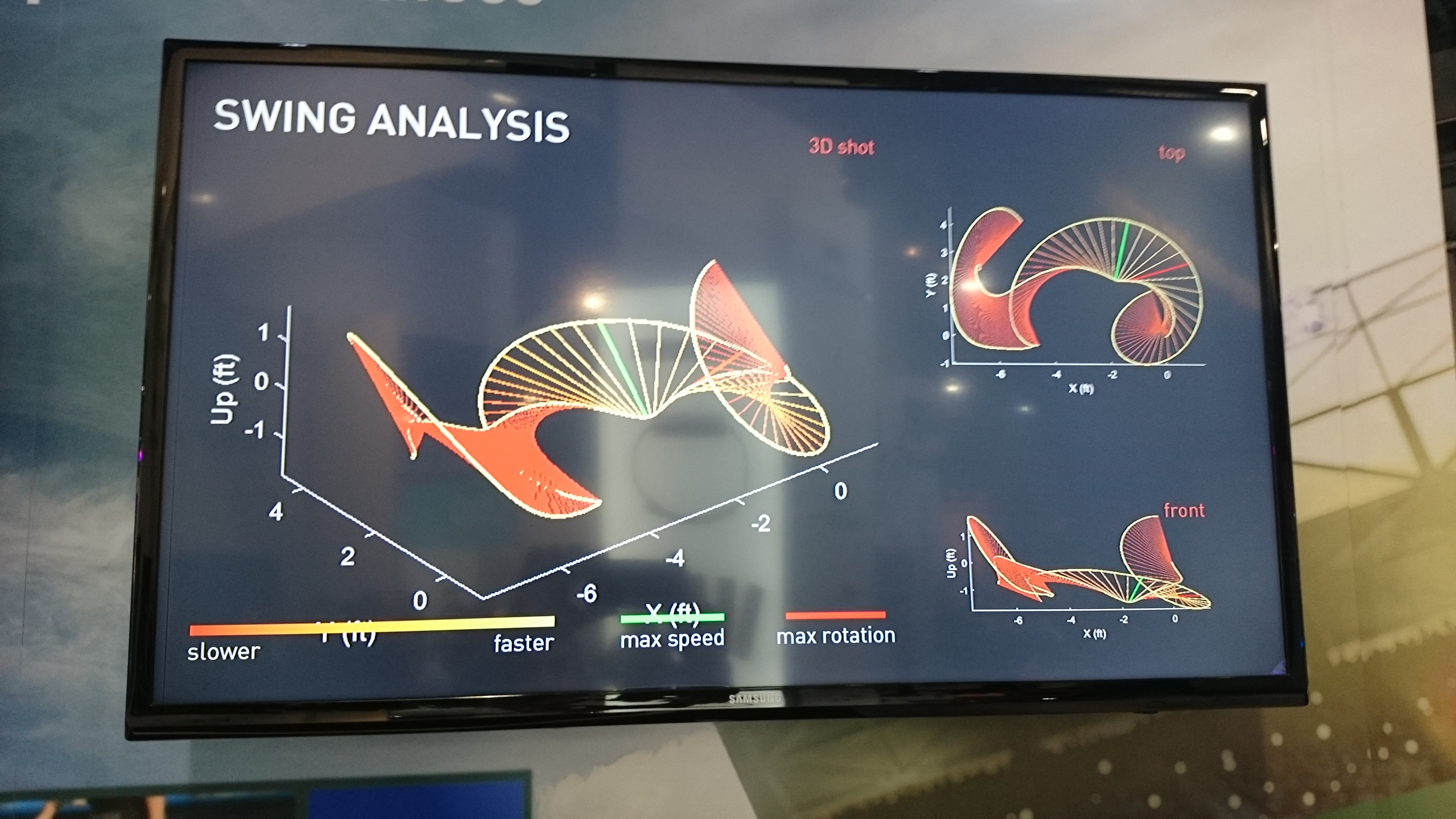 The data is then patterned into something resembling a swing analysis. Note that there is some noise in the data since this was just a demo and not a final product. 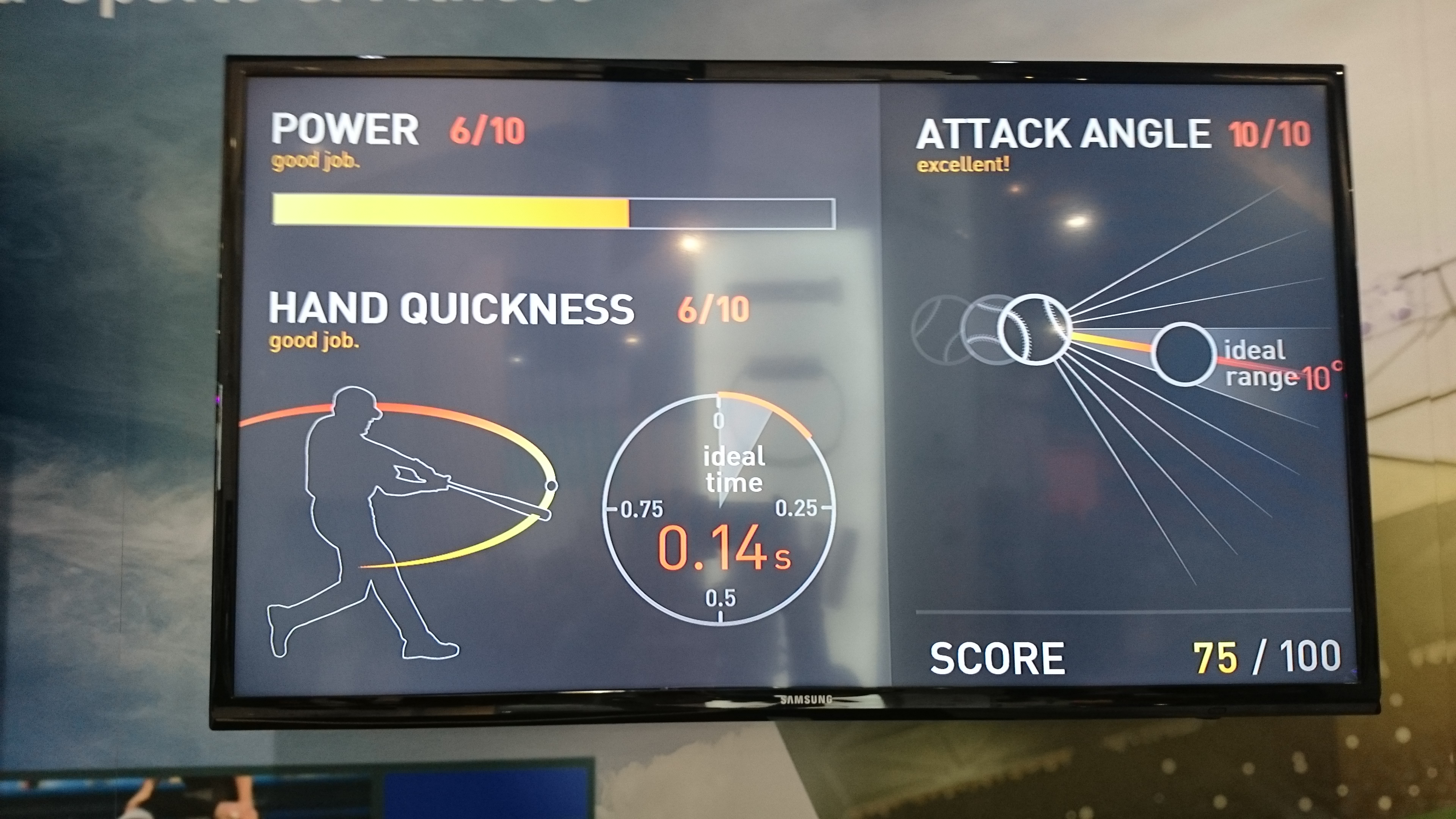 The Spartag sensor can be used in a variety of applications, though obviously baseball is one of them. Other applications at the show that showcased similar technology included tennis rackets, golf clubs, fitness trackers for dog/cat and people alike, etc.

Finally, another component company was present at the show. D30 makes proprietary materials that are highly impact resistant, but conform to new shapes under extended duress. The concept is similar to that of non-Newtonian fluids, though obviously D30’s offering is more advanced than a bit of corn starch and water.

D30 has partnered with All-Star to include these materials in impact-resistant equipment ranging from catching gear to batting/fielding gloves. Here is the Twins’ Chris Hermann explaining how one of their products works:

These exhibitors and events are just the tip of the iceberg. They represent some of the more obvious attendees showing off baseball technology, but there were surely countless more with applications that could impact the game.

Most of these innovations of course are targeting on-field or performance improvements, but there is a whole host of technologies that will greatly impact the fan experience as well. One of the biggest themes of CES was the Internet of Things, and how interconnected the world will become. Eventually stadiums will incorporate similar technology that will streamline something as mundane as ordering food into an efficient process.

Baseball, like most industries, is quickly becoming driven by technology. As time passes you shouldn’t be surprised to see baseball have a much bigger presence at CES, and other technology-focused trade shows.

You need to be logged in to comment. Login or Subscribe
walrus0909
Also from CES: Shaq using Easton/Blast sensor, falling over.
https://twitter.com/blastmotion/status/685176137111048195
Reply to walrus0909
BSLJeffLong
They told me that had happened but I didn't know there was video!
Reply to BSLJeffLong