Next offseason, Rodriguez will be eligible for the Hall of Fame, and much will be made of his ability, his reputation, and where he falls among all-time catchers. According to JAWS and the Hall of Stats, Rodriguez lands easily among the five best catchers of all time. It’s easy to see why. He was elected to 14 All Star games, won 13 Gold Gloves, has seven silver sluggers and an MVP award, and won a World Series ring.

Our new catching measures suggests maybe he wasn’t quite all he was cracked up to be. Over the course of his career Rodriguez’s framing was 11 runs worse than an average catcher’s; compared to a contemporary like Javy Lopez, he cedes more than 10 wins on framing alone. What Rodriguez was very good at, according to both the eye test and the data we’re releasing today, was obliterating the running game.

In fact, Rodriguez is the best ever. He saved 50 runs more than average with his arm alone. The next best catcher is Jim Sundberg, who trails Rodriguez by more than 15 runs. Among modern catchers, Yadier Molina is the closest, but he has barely half of Rodriguez’s career total. Molina is entering his age-34 season, so barring a miraculous end of career run, Rodriguez’s mark will stand for another generation.

How did Rodriguez rack up so many runs saved with his arm? A combination of elite pop times and a healthy dose of self-confidence. Take this play for example:

It’s not impressive because of who he threw out—Nick Johnson never had a reputation of being fleet of foot—but because of everything else going into the play. It was Game One of the World Series, a stage where many players might just not want to make fools of themselves in front of a hundred million people. It was also a tie game, with multiple runners on, so a wild throw would have been disastrous. Rodriguez made a perfect throw, leaving Johnson to crawl back to the base in vain. He got the ball to third in roughly 1.0-1.2 seconds from the time it hit his glove (though its hard to know exactly when Lowell catches it).

Rodriguez was sometimes criticized by pitchers for his poor receiving skills, as he preferred throwing out baserunners to getting borderline strikes. Cliff Corcoran noted this reputation when Rodriguez hung up his cleats in 2012:

Rodriguez fairly terrorized would-be base-stealers with his potent arm and penchant for throwing behind them at first base, and he led the league in caught-stealing percentage nine times. Even as his throwing ability faded in his later years, his career mark of 46 percent is outstanding by today's standards.

Despite his collection of Gold Gloves, Rodriguez was hardly a flawless receiver. He was never known as a great game caller, and some pitchers complained he was reluctant to call breaking pitches for fear they might hurt his chances of throwing out base stealers.

Take for example this image from a video of Rodriguez throwing Ken Griffey, Jr. out at second base: 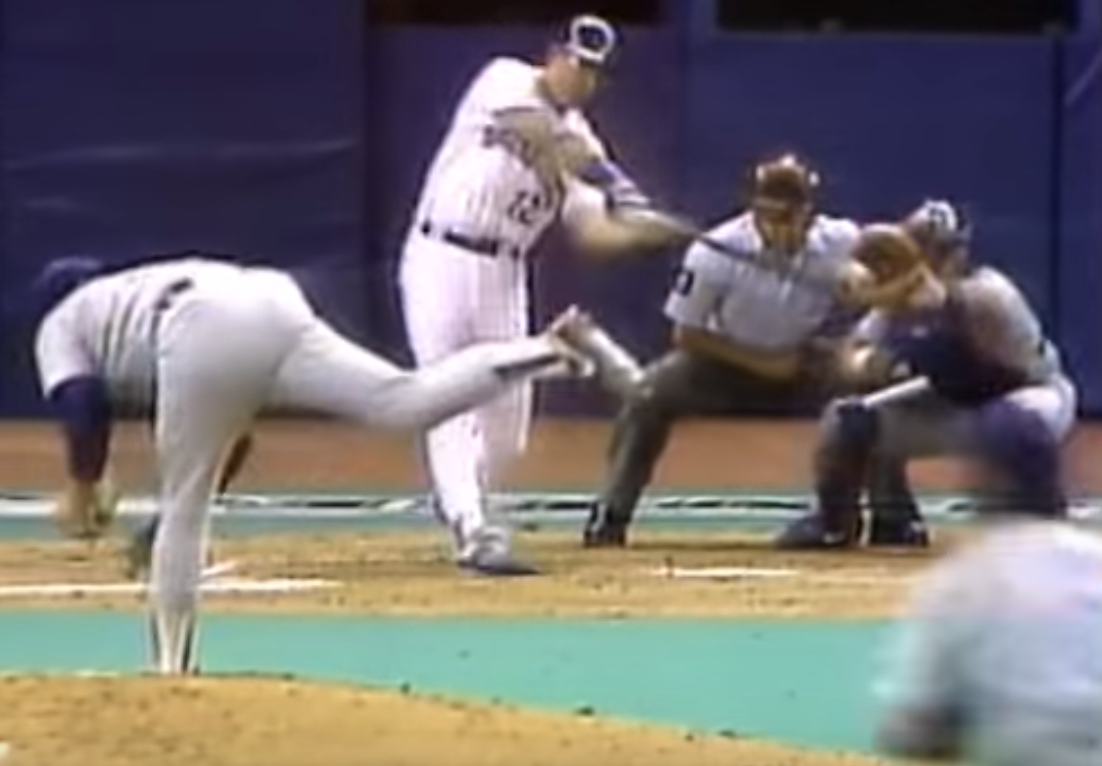 Rodriguez is well out of his stance, catching the high offering at near eye level to make the throw to second that much quicker. In this case his cheating helps him shave a few hundredths of a second off his throw, and he gunned down Griffey.

This wasn’t a one-time thing. Rodriguez routinely left his crouch to get in better position to make throws. It might not have helped his framing numbers, but it was certainly effective in minimizing the running game. It’s been well documented that the baserunner and the pitcher control the majority of the success/failure of any given stolen base attempt. But Rodriguez did the two things he could to prevent steals: His reputation kept runners from trying, and his arm kept them from making it.

By SRAA—which measures the likelihood of basestealer success, with other factors controlled for—Rodriguez ranked fourth all-time. By TRAA—which measures the frequency of baserunners attempting to go against him—he ranks ninth. Put them together and add in his longevity, and that’s how you get the greatest ever.

Below is Rodriguez’s ability to control the running game charted over the course of his career. The blue line represents runs saved by mowing down runners while the yellow line indicates how many runs he saved simply by teams not attempting to steal as much as they should have: 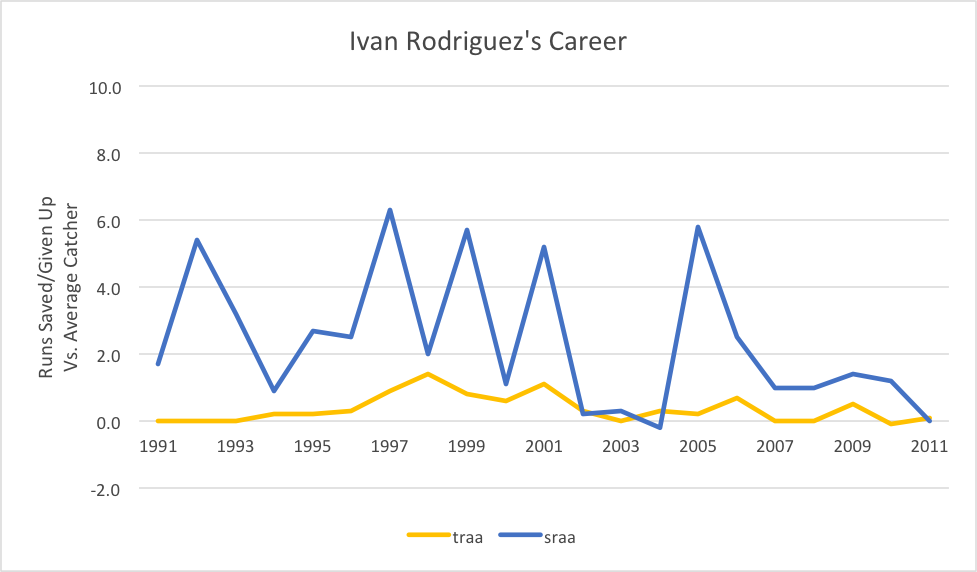 Granted, this value might have come directly from his framing efforts, but it’s still impressive that, by a skill many of us have grown to think of as overrated, Rodriguez was genuinely able to generate that much value.

To put the 50 runs his arm saved in perspective: That’s more than the value produced (over replacement level) by, say, Santiago Casilla. Pudge’s arm was worth as much a pretty decent closer’s arm— and those guys don’t bat 10,000 times at a better-than-league-average level.

So maybe you look at Rodriguez’s catcher defense ratings today and you think, hrm, disappointing. Maybe they even hurt his Hall of Fame case a little bit. But here’s what we always knew about Ivan Rodriguez: At one of the sexiest parts of baseball, he was always the best. And now we know that, indeed, he was always the best. And he was probably even better than we knew. He did it for 21 years at an incredibly elite level. Opposing teams were scared to run on him, and rightly so. Nobody wants to be Nick Johnson, futilely crawling back to the base as the defender waits for you.

You need to be logged in to comment. Login or Subscribe
agnatgas
Thanks for this great article. Pudge was pure joy to watch behind the plate. What a rocket for an arm!
Reply to agnatgas
bhalpern
I'm confused about how coming out of the crouch to throw could have had a substantial impact on the framing totals. Those situations can't be a very large percentage of total pitches. Can the framing figures be broken down by situation, e.g. ---, 1--, 12- etc...?
Reply to bhalpern