With the year winding to a close, Baseball Prospectus is revisiting some of our favorite articles of the year. This was originally published on September 9, 2015.

On Sunday, Kris Bryant hit what might have been the longest home run of the year, at 495 feet. When we see one of these home runs on the internet, we have one of two experiences: 1) We see a ball hit out of our screen's frame with what appears to be considerable distance and trajectory; some combination of batter, pitcher or catcher body language provides a clue that it is far enough to avoid being caught; and then we cut to a ball landing, far away; or 2) Somebody shows you a video and says "this is an absurd home run," and you watch, sure in the knowledge that what follows will be a long home run. There is little suspense, and there is little in the way of a journey; as far as our perception goes, the ball might as well have teleported to its landing spot. The ball might as well have been filmed in two separate shots, like made baskets in the basketball episodes of Family Matters. In fact, I wouldn't call either of these "experiences." They're moments of storywatching, at best. Still fun, mind you. In fact, let's storywatch this right now!

But there are other people who saw that home run differently, who saw its entire journey against the infinite backdrop of space. People who didn't just see the longest home run, but actually experienced it from conception to maturity. These people were sitting behind Kris Bryant in the shot from the first-base dugout camera well. 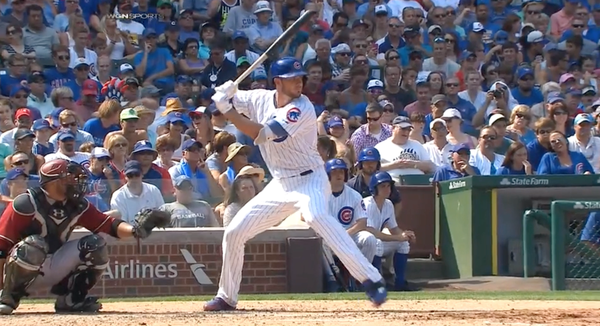 The Cubs trail by one as the fifth inning begins. Rubby De La Rosa pitches to Kris Bryant, jumping ahead 0-2. Rather than try to entice him with an off-speed pitch, De La Rosa shakes off his catcher and throws a fastball.

Enter: Lady in white tank top, just below the "W" in the WGN logo. Regular day. Regular pitch. Kris Bryant has seen 2,253 pitches this year, and the overwhelming majority of them did not travel 495 feet off his bat. The likelihood such a thing will happen here is low; perhaps lower, indeed, than the likelihood that a sack of flour will fall out of the sky. While the Lady is terribly positioned to see an impressively long fly ball, the rest of these fans are terribly positioned to dodge falling sacks of flour. 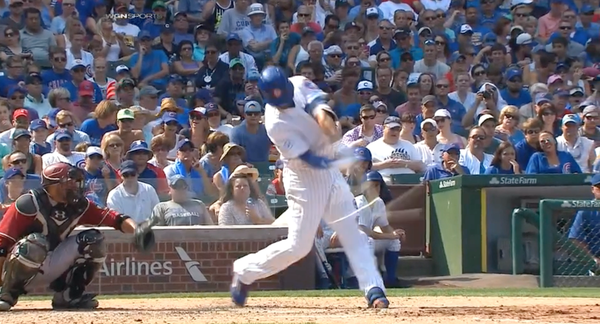 The Lady stares straight into the sky.

Enter: Man resting his face on his hand, directly in front of the Lady in the white tank top.

Enter: Woman with the big smile, first row behind the dugout, no doubt turning over a funny idea for a Tweet she's been workshopping in her head.

Enter: The man in the black Deal With It sunglasses, hat turned backward, nustled up against Kris Bryant's back. This is a lazy afternoon game, and most of our fans are engaged in a state of relaxed awareness, distracted by heat or funny tweet ideas or the weight of one's own face. Most sink as deep into their chairs as the socioeconomics of stadium seating allow. But Deal With It Glasses is the Lady in the white tank top's opposite, sitting up alertly, poised and ready to erupt, ready to see, ready to live, and without a doubt the first person who will be hit by flour if a sack of flour falls from the sky. 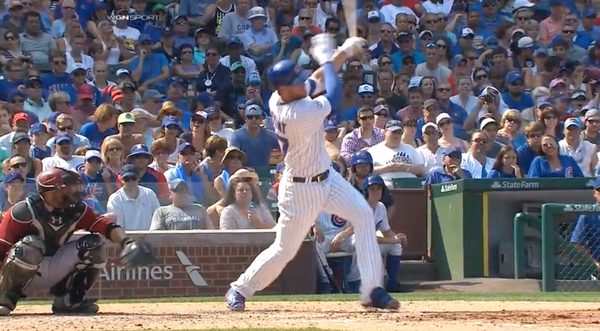 The Lady stares. The fan whirrs. The joke is still funny. The hand supports the face. The man continues to await his chance to spring. The ball leaves the infield.

Enter: Welington Castillo, the first person in the picture to exhibit awareness of what has just happened, his glove slumping from a target to a frown. 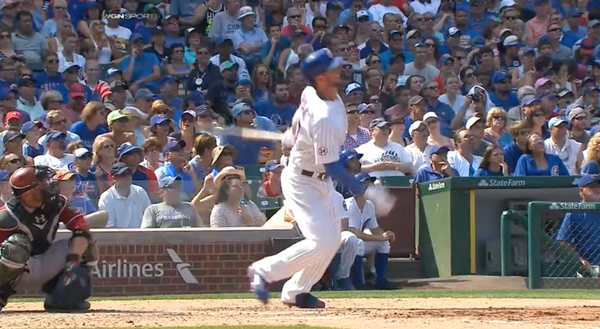 Bodies pivot, satellites tracking our protagonist but maintaining their courses. The heavy face retains its perch, the spring-loaded Deal With It man stays taut, the cool air from the fan moves from face to neck as the chin lifts in pursuit of the ball. Of our established characters, only one registers a changing mood: The smiling woman's smile is gone. She has not realized what is happening, exactly, but she has realized that something is happening, and her brain has begun the transition from That to This.

Enter: Kid in the red T-shirt, just over Bryant's shoulder. His is the first fan reaction visible, and it is a predictable, accurate response: "0___0". He and Bryant tie for first place in facial manifestation of awareness. They and a cowering Welington Castillo now form a conspiracy of three.

The lady in the white tank top stares into the sky, and notices how much clouds look like sacks of flour. 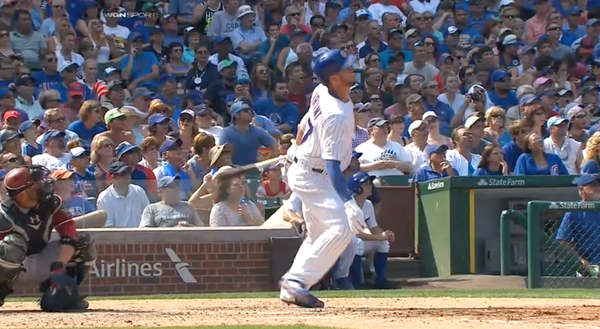 Enter: The main in the green cap, two seats over from Red T-shirt; and the man in the wraparound shades, near the top-right corner. Each joins into this new reality, mouths open, a conspiracy of five now. They each trail the Kid in the red T-shirt, who has continued to progress while they caught up, like the tortoise in Zeno's paradox. While they are now just reaching "0___0!", he is way out in Hello Nurse! territory. 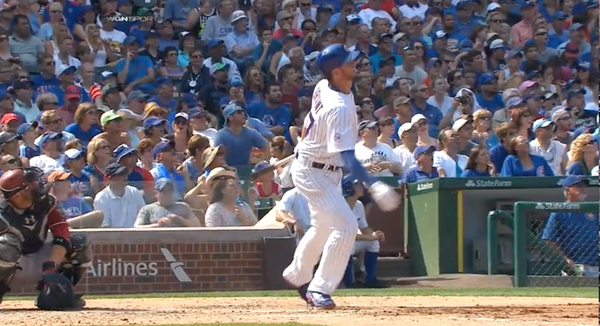 Enter: The man in the front row next to the woman with the fan, hoping to catch a baseball, but frustratedly realizing the Kris Bryant has hit a baseball as far away from him as is almost physically possible.

Enter: The Girl in the blue cap, fourth row toward the left; the Young Lady next to the Kid in the red T-shirt; the Redhead two seats behind the Woman who had the big smile, and who now looks to have an extremely serious case of concerns. 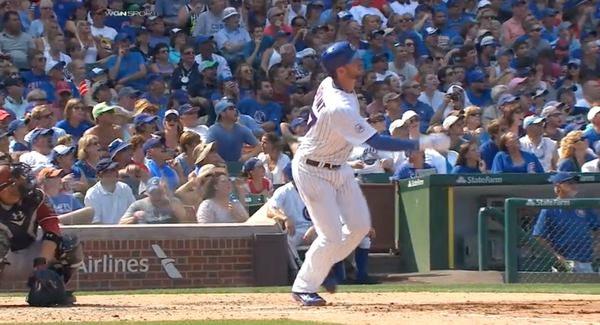 Enter: The Dude in the bright yellow hat. Trust me. I've watched this frame by frame no fewer than 75 times, and he is the first person to start standing up. Not spring-loaded Deal With It guy, who is still exactly where he was when the pitch started. You can tell, if you look carefully, that Dude in the bright yellow hat's shoulders have begun to gain clearance over the lady-head in front of him. Seriously: Look at the picture above; now look at this one; now back up; now back down. It's an inch. It's The First Inch! Man is beginning to stand erect!

The sky is blue, with scattered clouds, and the Lady in the white tank top is on it. 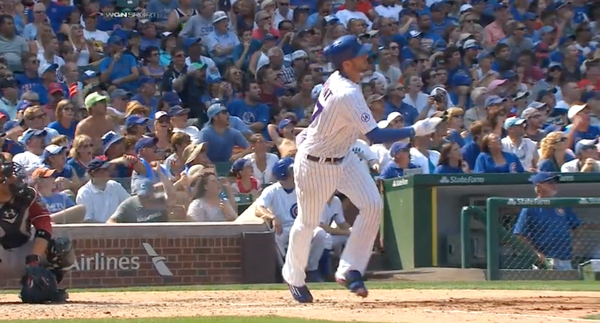 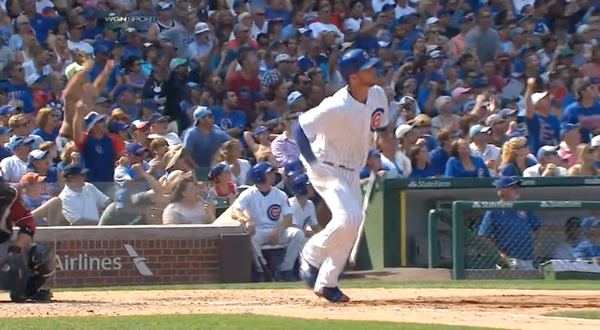 The man with the heavy face has finally removed his hand pedestal. The woman who was smiling, then lost her smile, is now smiling again, at something totally new: An impressive baseball flight. The man in the front row next to the woman with the fan completely does not care to see where this ball lands, as it will not land near him. The kid in the red T-Shirt's face is melting into a distended blur. The woman with the fan has repositioned her fan; her face is cool once more. The sky: It's a sky. Would you look at that beautiful sky? Would you look at it, forever?

And, in a bright yellow cap: Triumph! Arms raised! He is first to celebrate, and in celebrating he is also celebrating his celebration. Arms high, Dude, for you have stood up before anybody else stood up. And arms low for you, Deal With It guy, for you are a pale imitation of a person who stands up quickly for long home runs. 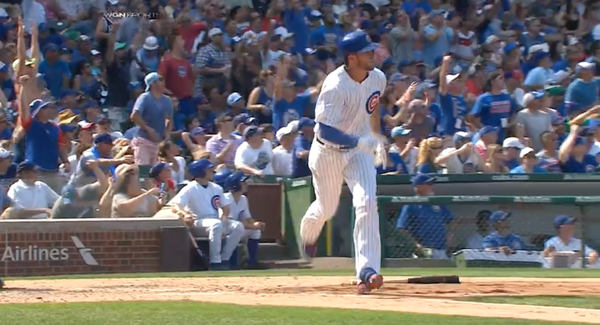 Enter: Chaos. Limbs akimbo. Angles askew. Lines intersecting. Fainting and falling, leaping and thrusting. A plastic bag of gummy worms, melted in the hot sun to form a continental gummy slab. You are not you, I am not me, we are only specks of dust that together form a moon, and we hold each other close with our gravity so that the sun will have a body to reflect its shine against. Celebration is a single note, likely in the key of G. 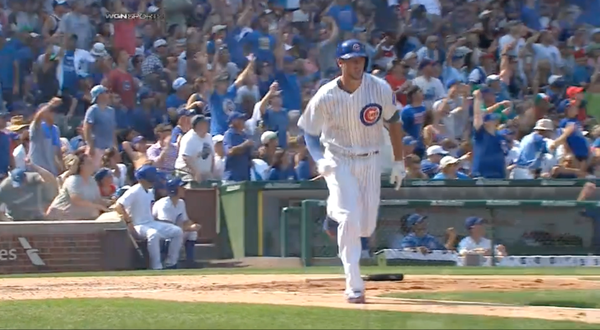 Enter: Shirtless Boy, two rows directly behind the bat boy, chill AF in a 135-degree recline. Everybody else stood for the view. Chill AF Shirtless Boy is chilling, making sure he doesn't lose his seat, and confident in his knowledge that, with many years ahead of him, and many years of Kris Bryant ahead of him, he will see one go farther.

You need to be logged in to comment. Login or Subscribe
Chino5
Brilliantly done. I'm thinking the Lady in the white tank top was ahead of the curve in preparing to see the ball at the apex of its flight.
Reply to Chino5
Hodiggity2001
Literally laughed out loud.
Reply to Hodiggity2001