As a prospect, Scribner . . . well, he wasn't really a prospect. Even after a breakout season in 2008, one in which he posted a 7.15 K:BB ratio with nearly half his innings coming in the hitter-friendly Cal League, Scribner remained off the radar for scouts and prospect analysts. Forget Baseball Prospectus' 2009 Padres top 11, Scribner—after terrorizing Single-A hitters the previous season—couldn't even crack the Padres top 30 in Baseball America's Prospect Handbook. His lone mention there came where minor-league pitchers go to die: the unranked right-handed reliever section, right between Scott Patterson and Jeremy McBryde.

Despite the gaudy numbers, there were legitimate reasons for the lack of attention. A 28th-round pick by the Diamondbacks in 2007, Scribner was drafted as a senior from Central Connecticut State, his fastball sniffed 90 on a good day, and he profiled strictly as a reliever. He was also 22 in 2008 and hadn't yet proven himself in the upper rungs of the minors. If a public scouting report existed on him back then—and I'm still not sure one did—it probably said something about pitchability, good make-up, and underwhelming stuff . . . a Quad-A reliever if everything breaks right.

There were hordes of pitchers in minor-league cities from High Desert to Salem to Toledo racking up solid numbers with more projectable stuff, and Scribner was easily cast aside in the non-prospect bucket. When he surfaced with the Padres in 2011 and latched on with the A's in 2012, the story served more as one of baseball's many pleasant surprises than a strike against the state of prospect evaluation. The Evan Scribner mold produces many minor-league hurlers, and while most of them fail to attain major-league success, once in a while one or two are going to break through.

Scribner’s 2015 season was one of the most extraordinary relief pitcher seasons ever, as he struck out 64 and walked just four in 60 innings, good for the third-best K:BB ratio (behind a pair of Dennis Eckersley seasons) and the 12th-best BB/9 since 1901. But Scribner's proclivity to throw everything near the plate led to another statistical oddity: He surrendered home runs like Jose Lima circa 2000, giving up 14. His DRA of 4.63 nearly hit his career mark on the dot, but the ingredients that made up that figure had completely changed. Scribner was almost perfectly weird.

There are countless different ways to dissect Scribner's season and attempt to draw some sort of meaning out of the madness, but I can't resist one simple question: What does an Evan Scribner walk look like?

Scribner's first walk surrendered during the 2015 season was innocent enough. It came against his 25th batter faced of the season, at a time well before he'd proudly wear the moniker, Dude Who Doesn't Walk Anybody. It also came during his second inning of work that night, two batters after he served up a home run ball to Luis Valbuena.

It also featured one called ball—a 1-0 fastball—that clearly caught the bottom of the strike zone (pitch no. 2):

Scribner got to two strikes but Castro wouldn't bite on a down-and-in slider and then fouled off a full-count curve, ultimately keeping the at-bat alive long enough for Scribner to yank a fastball for ball four. Here's that pitch:

Scribner went another 23 batters before giving up a free pass, this time to the Rangers' Carlos Peguero. Ignoring for a second that any walk can be excused for a number of reasons, given what we know about the context here—the game situation, Scribner's burgeoning career as a control specialist, Peguero's general distaste for base on balls (he once walked 10 times in 385 Cal League plate appearances, though he's improved in that department recently), etc.—this one qualifies as a moderate eyebrow-raiser. 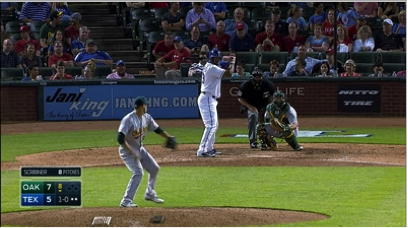 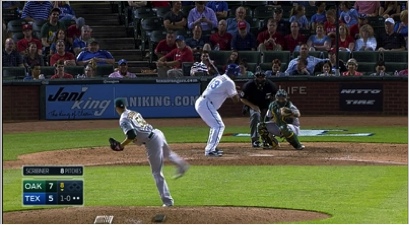 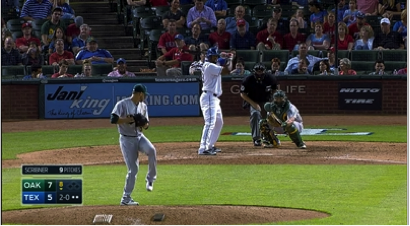 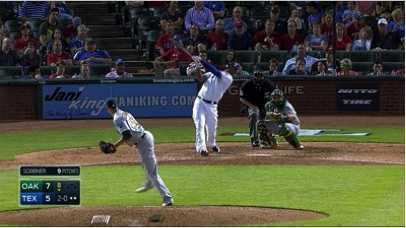 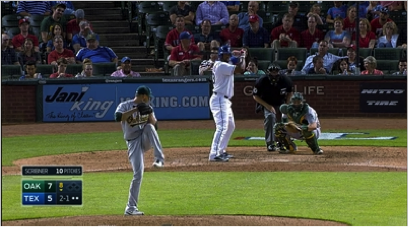 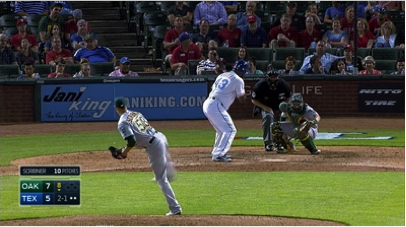 *Perhaps this is a good opportunity to mention that Vogt ranked 100th out of 105 catchers last season in Framing Runs (-10.3).

After the Peguero walk on May 1, Scribner went a season-best 82 batters without issuing a free pass. Then came June 12th in Anaheim, where he entered the eighth with a one-run lead, faced Mike Trout, Albert Pujols, and Kole Calhoun back-to-back-to-back, yet walked the fourth batter, Johnny Giavotella. Prior to the walk, Trout and Calhoun redirected Scribner pitches over the fence while Pujols took one to the warning track.

Scribner was understandably wary of surrendering another gopher ball, even to the light-hitting Giavotella, but he pushed the count to 3-2 and juuuust missed strike three on principle alone:

Of the 18 home runs Scribner's given up since 2014, 14 of them came before the count reached two balls, which leads us to an obvious hypothesis: Scribner's challenging good hitters too often when he's ahead or it's early in the count, and he'd probably do well to throw more pitches outside of the zone—especially to the Trouts and Pujolses and Mark Teixeiras of the world.

Then again, you don't walk four guys over 60 innings by purposely avoiding the plate.

Scribner rebounded from the Giavotella walk—and more so, the home runs that preceded it—by not surrendering another one for 34 more batters. Meanwhile, though, the home run problems worsened. After the two he gave up against the Angels, Scribner allowed another four over his next eight outings, and that doesn't count this one against the Yankees, in which Scribner's 2 1/3 innings at Yankee Stadium yielded an unsurprising result: two more long balls, both to Mark Teixeira. All told that's eight home runs in an 11-inning stretch that reclassified Scribner's season from historically good to historically . . . different.

Here against Chris Young, for the first time, we meet Wild Evan Scribner. He walked Young on four pitches, none of which was particularly close. Note that of Scribner's four walks, three came following a homer. Here's ball four:

For those keeping track at home, Scribner closed the season with a 66 batters faced walkless streak before being shut down in early September with a torn lat muscle.

Scribner was dealt from the A's to the Mariners this offseason for minor-league pitcher Trey Cochran-Gill, as both teams have restructured their respective bullpens. The good news for Scribner is that he didn't get traded to Colorado or Baltimore or the moon. Although it's slightly more homer-friendly, Safeco also rates as better overall pitchers' park than the O.co Coliseum. The bad news is that most teams like to use their relievers on the road, too. Also, 18 of Scribner's 24 homers allowed have come at pitcher-friendly venues.

The other good news is that Scribner was never supposed to get this far anyway, and despite the preponderance of home runs in his game, he's managed to otherwise dominate major-league hitters with an unusual combination of control and strikeouts. The stuff isn't great—the fastball sits in the low-90s and the breaking pitches don't induce an inordinate amount of whiffs—but Scribner attacks the strike zone like he's a right-handed version of Aroldis Chapman, and, somehow, it often works. If he ever figures out how to navigate around the 400-foot fly ball, he'll be the right-handed version of Aroldis Chapman—with 10 fewer miles of fastball velocity, of course.

Either way, we'll be watching.