Some sneered when Cueto turned his nose up at $120 million of the Diamondbacks’ fancy new TV money over this same term, but in truth, it was a pretty safe bet on himself. If it hadn’t been clear coming into the winter, the early market movement made it pretty clear that Cueto was worth more. Now, Arizona’s division rival has managed to grab him, for a little more money and (though perhaps the Diamondbacks were offering one, too) the flexibility afforded by that opt-out.

It’s tired, but worth repeating: an opt-out is never a team-friendly provision. That’s like saying that a club option at the end of a contract extension is player-friendly. Any provision that gives one party unilateral decision power favors that party; arguments to the contrary are addled.

I think I’ve found the right comparison point, though, the way of communicating this that will satisfy the tickle at the back of your brain that tells you an opt-out is somehow a trap, and here it is: strikeouts. Opt-outs are like strikeouts. A long time ago, stat-savvy baseball fans came to accept two truths:

1. Pitchers need strikeouts. Strikeouts are really, really good for pitchers. If you needed to know how good a pitcher was but could only have one basic stat by which to evaluate him, you should choose strikeout rate.

2. Hitters need not fear strikeouts. Babe Ruth struck out at a preposterous rate, adjusting for his era. It’s easy to trade contact for other things and come out ahead, as a hitter. You just have to be the right type of hitter.

So it is with opt-out clauses, in most cases, and certainly in this one. The player gets a huge benefit from the ability to decide whether to hit the free-agent market again at a given point, but the team loses fairly little. If including that flexibility is a deal-breaker, and if the player angling for one is vital to a GM’s plan, the GM has to pull the trigger. If the deal gets done, it means the team is comfortable paying either the shorter-term deal implied by the opt-out or the long-term one that goes in the headline the next day and makes knuckleheads call into radio shows to complain.

Obviously, though, it’s not that simple. Front-load the deal too much, and that’s like a hitter running a 33-percent strikeout rate, because the player gets an above-market salary up front and has all kinds of incentive to get back into open water. Ditto for giving the opt-out too early, because that puts undue risk on the team’s side of the ledger. Those are the things the Giants are in danger of doing here. I’m not ready to say they’re doing them; let’s see what comes of the rest of the winter. They’re in danger of it, though.

They’re in danger of it, because paying Cueto $46 million over two years leaves four years and only $84 million on the other side of the opt-out. By the winter after 2017, the only way Johnny Cueto chooses four years and $84 million over another run at the market is if he’s hurt, and if he’s hurt, the Giants won’t be happy about owing him for four more years. The history of these clauses is (for the moment) brief, but this is one of the more leveraged ones we’ve seen.

Brian Sabean is taking the risk anyway, because the Giants are in as good a position to make a leveraged bet as they’re likely to be for a long while. They’re an expensive team, these days: Cueto will become their seventh eight-figure investment for 2016, and he pushes their projected payroll into the $170 million range. Maybe they can afford that, but they can’t throw it around lightly. Some of the vital members of this core are moving toward the end of either their team control or their prime seasons, and that applies both time and financial pressure to the pursuit of another title or two.

The bullpen is old. Hunter Pence is old. Angel Pagan is headed for free agency. Brandon Crawford and Buster Posey are both 29, and while they’re both great, Posey is already expensive, and Crawford is about to be. The Giants are on the hook with them well into their 30s. The farm system is bad. So the time is now.

Cueto is perfect for Dave Righetti. He’s a junkballer, not in that he doesn’t have good stuff, but in that he throws everything. He’s an absolute kitchen-sink guy, the way Tim Hudson, Jake Peavy, and Mike Leake (Ceuto’s former teammate, and the guy the Giants chose to deal for in their failed pursuit of the second Wild Card this summer) all are. In early 2013, when Beyond the Box Score attempted to formulate pitcher similarity scores (based on arsenal, pitch usage, sequencing, and movement), Cueto rated as very similar to a number of Giants starters, past and present. 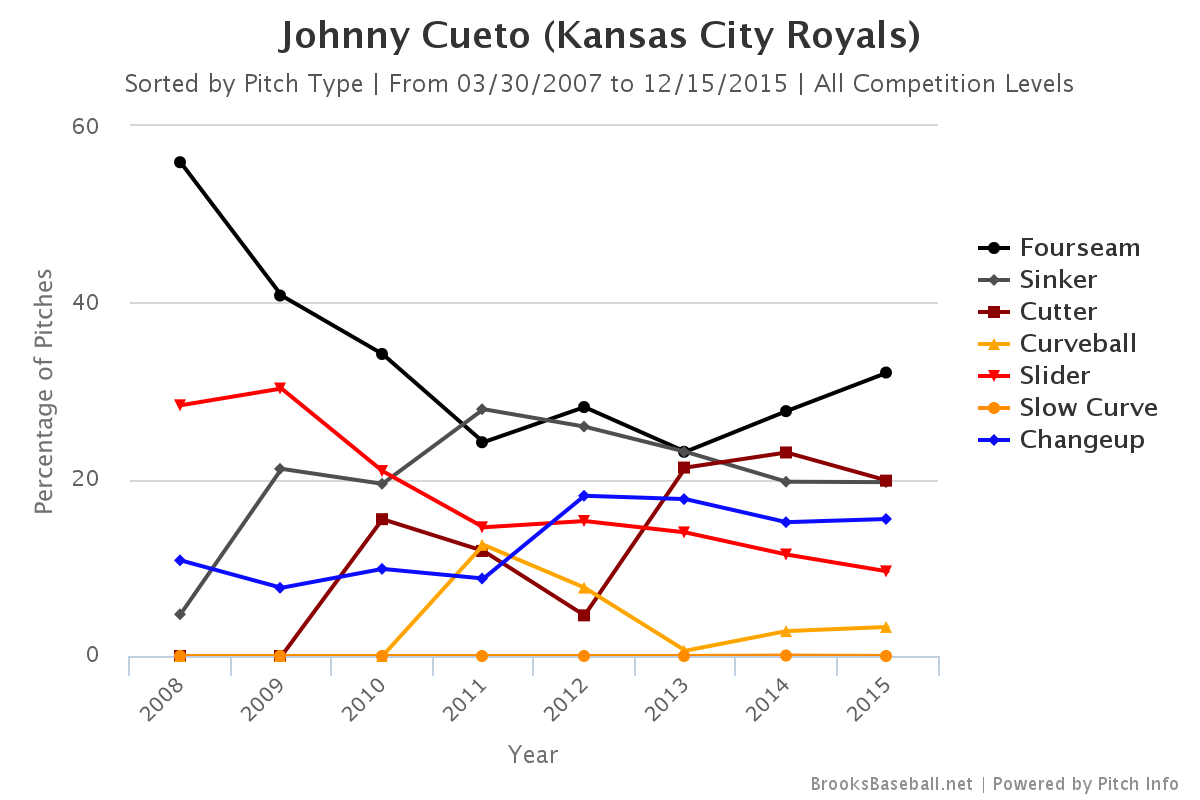 There are a lot of chips on the table for the Giants now. Cueto rounds out a rotation with such big names that you can almost miss the warts—though the warts are there. This might be just for a couple of years, and if it’s not, the Giants probably made a mistake. If it is, though, and if a few things fall into place alongside Cueto, the NL West is there to be won. The Dodgers left the door open a crack, and lo, the Giants and Diamondbacks have blown it open. —Matthew Trueblood

This is pretty much a best-case scenario for fantasy owners, is it not? Cueto has spent nearly his entire career in extreme offensive environments but now gets to spend at least the next two, and potentially the next six, in one of the best pitcher’s parks in the league. Say what you want about any red flags on Cueto’s resume, but they would’ve been red flags anywhere. They’ll be more easily masked in AT&T Park than almost anywhere else: the park has now been the toughest to hit home runs out of two years running, per ESPN’s Park Factors.

Fantasy owners should’ve been rooting hard for Cueto to become a Giant, Dodger or Cardinal, so this is a big victory for our purposes. Even with Cueto’s post-trade struggles (4.76 ERA in 13 Royal starts), he finished as the 23rd best starter in standard 5×5 formats. He’s a very strong no. 2 starter in standard leagues, and if your league runs 15-or-so squads deep he’s a passable no.1.

Heston’s value takes a small step back with the Cueto signing, but Jake Peavy is about to turn 35 and Matt Cain hasn’t thrown more than 100 innings in two years. Heston will get his shot at some point in 2016, but it likely won’t come at the start of the season. Unless you’re in a TDGX-esque league, however, you really shouldn’t have been banking on Heston anyway. —Ben Carsley

You need to be logged in to comment. Login or Subscribe
sam19041
Why is it "bad" for the Giants if Cueto is healthy/effective and chooses the opt-out after two years? Two good years at the price they are paying seems reasonable in this market, they won't have a longer term commitment to an aging pitcher, and can probably recoup value by making a qualifying offer.

Seems like a huge win for the Giants in that scenario, no?
Reply to sam19041
jonathanaustin
Unless the player is making a mistake in evaluating his market value, its never good for the team if he opts out. Even if the team didn't want to keep him, they could always trade him for something in return (any team that would sign Cueto for more than 4/84 should also be willing to trade for him).

The QO offer is a good point - I guess there could be a situation where the value of a compensation pick > than a player's trade value, such that you'd rather him opt out so you can get the pick. I'm surprised more premium FA's don't demand clauses that say the team can't make them a QO.
Reply to jonathanaustin
shawnwereley
Basically, if he chooses the opt-out they don't get a good pitcher for 4/84.

Sure, he could tank after that but that risk applies to all players. Everything else being equal, no opt-out > opt-out from the team's perspective.
Reply to shawnwereley
kcshankd
Two years from now, the Giants will be able to pay market price for another ace.

It's like leasing a car. Who buys a car to enjoy miles 100,000+ anyway? You tolerate it if you have to, but those first couple years feel pretty good.

Reply to kcshankd
DetroitDale
.... which will almost certainly be more than what they're paying Cueto now, else Cueto would not opt out
Reply to DetroitDale
DetroitDale
Dodgers lost Grienke to the D-backs, Price and Zimm already signed in the AL and the Giants got Cueto. The music has stopped the chairs are full and the Dodgers are the last man standing.

Next year is going to be interesting in the NL west.
Reply to DetroitDale
morro089
In regards to opt-outs, there are three additional points I want to make:

Pro: If you offer an opt-out it might make the player more likely to choose your team, therefore you "win" the auction

Unsure: Let's imagine the Giants had two options. Option 1 is give Cueto a 6 year, $150 mil deal, no opt-outs. Option 2 is the deal given here. Option 1 actually might be viewed as carrying more risk only because you're giving more AAV to an older, short pitcher who's likely to regress sharply at that age regardless of his 2016/2017 performance. With option 2 the most amount of money you could pay is lower. Is that risk greater than the risk that Cueto might actually be below market rate at 4/$84 though?

Con: In regards to the uncertainty of the last 4 years when you include an opt-out, this is similar to businesses giving out gift cards. I read an article (can't find it now) where those gift cards hang out on a company's bottom line as "in process"[1] so they can't spend that money. It's, at the moment, dead money you can't invest. You have that with Cueto's last 4 years. It's hard to commit to an extension for Crawford currently because in 2018 you're not sure if you'll have $21mil on your books or not.

[1] I know very little about accounting so please forgive the improper terminology
Reply to morro089
rweiler
Now that the dust has mostly cleared, I'm not sure the Giants didn't end up in the best pitching situation. At the end of 2014, you would have said a Bumgarner, Cueto, Samardzija, Healthy Matt Cain, Jake Peavey was a pretty good one. For 3 of those 5, their stock went way down because they either weren't as good in 2015 or, in Cain's case, really couldn't pitch at all. Assuming they rebound, the staff is much better and all it cost was the number 18 pick in the draft and less money for fewer years than Greinke or Price. Of course, if 2015 is the new normal, it is a disaster.
Reply to rweiler
backwardgalaxy
I like the theory that the Giants want Cueto to opt-out; that this is essentially a 2yr-$46mil offer, where they want him to pitch for a new contract that they don't want to sign. If they think he has 2 good years in him, or even 3, but not more than that, this feels good. Some other team will offer him a deal, he'll accept, and be that team's albatross.

If he breaks down too early, they're screwed.
Reply to backwardgalaxy