Pirates would move Mark Melancon in the “right deal”
After seeing the Red Sox pay the Padres a king’s ransom for Craig Kimbrel and the Astros do the same to the Phillies for Ken Giles, teams with high-end closers to offer are doubtless intrigued by the possibility of cashing them in for a bevy of prospect talent. The Pirates boast the defending major-league saves leader, Mark Melancon, who capped off 51 Pittsburgh victories in 2015 and is entering his final season of arbitration eligibility. General manager Neal Huntington told reporters Monday that while the team is planning to keep both Melancon and top setup man Tony Watson, the former could be available to teams willing to pay through the nose.

With free agency on the horizon after the coming year, Melancon wouldn’t command the same sort of package that Kimbrel—extension through 2017 with a 2018 club option—or Giles—under team control through 2020—did, but the 30-year-old has the whole “proven closer” thing going for him, and the trade-market supply is rapidly dwindling. Two names are already off the board, and a third, Aroldis Chapman, might be untouchable for all the wrong reasons, with domestic-violence accusations casting a shadow over his character and uncertainty over his availability for part of the 2016 season.

On the other hand, Melancon’s pitching style differs from those of Kimbrel and Giles. He became more of a finesse arm in 2015, 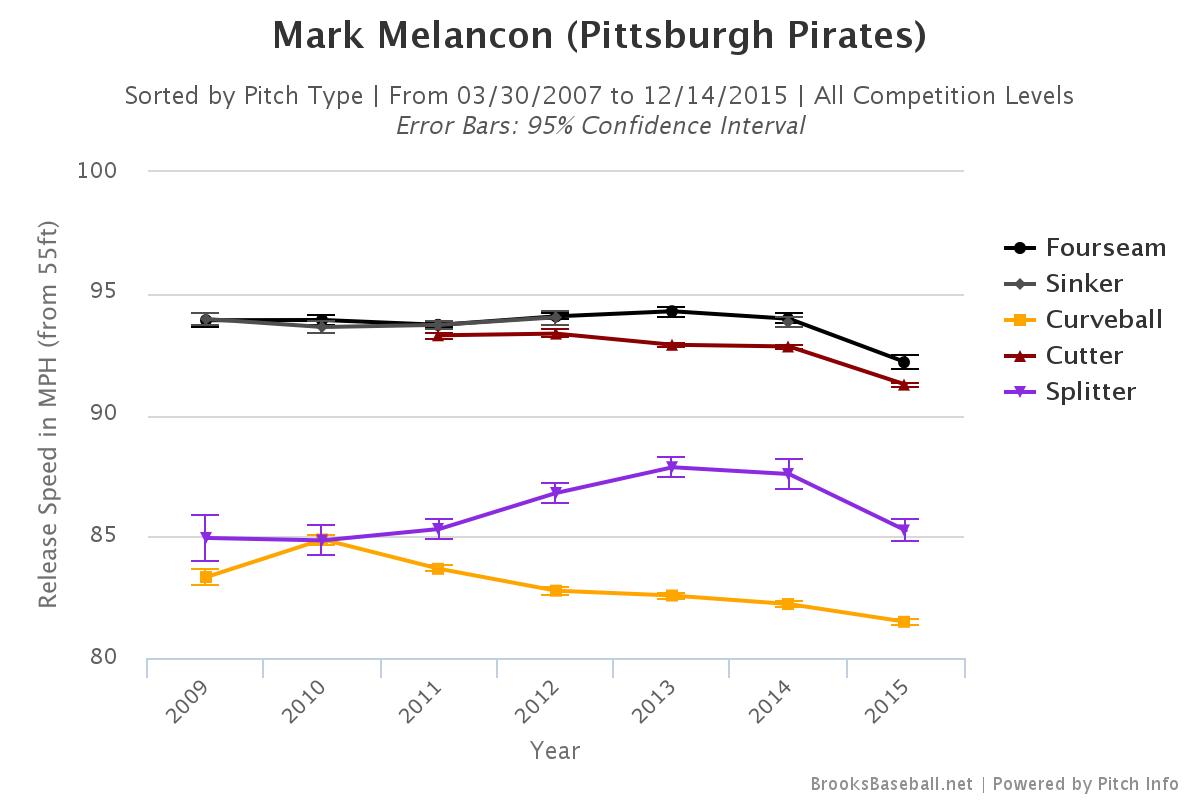 and it took a month or so for the right-hander to learn to work with a low-90s fastball instead of mid-90s heat. Melancon was touched up for a 5.23 ERA in April, amassing a 7-to-4 K:BB ratio in 10 1/3 innings before righting the ship in May and performing well thereafter. The adjustment to his diminished velocity appears to be complete—and Melancon was plenty effective in spite of the dip thanks to outstanding control and command—but it brought his strikeout rate down to 21.2 percent, his worst output in that department since a calamitous 2012 in Boston. His DRA also jumped from 2.21 in 2014 to 2.90 last year, and while the latter is quite nice, it pales in comparison to Giles’ 2.16.

All of that probably means that Melancon will pitch his age-31 season in Pittsburgh, blessed with a fine run-prevention environment and the sorcery of Ray Searage on his way to a free-agent payday next winter. He’s projected to earn $10 million on the nose in his third and final pass through arbitration, a hefty spike from his $5.4 million salary last season, anticipated mainly on account of his league-leading saves bonanza. Chapman, Kenley Jansen, and Jonathan Papelbon are among the ninth-inning arms set to join Melancon on the open market a year from now.

Todd Frazier a hot commodity on the trade market
While impact outfielders are abundantly available in free agency, even after Jason Heyward’s hitch with the Cubs, power-hitting infielders are hard to come by. Teams seeking an offensive boost at the hot corner are thus busy phoning the Reds about Todd Frazier.

The 29-year-old Frazier bopped 35 homers in 2015, slashing .255/.309/.498, and he’s under club control for two more seasons, the first of them at a $7.5 million salary locked in via a two-year, $12 million extension he signed on February 8th. The right-handed batter’s value is tempered somewhat by the middle figure in his triple-slash, a 27-point plunge in OBP driven by a more aggressive approach that upped his power at the expense of some walks. True Average viewed that tradeoff as a modest net negative for Frazier, who dropped from a .297 TAv in 2014 to .293 last season. That placed Frazier 10th among third basemen, even though only two of those ahead of him—Josh Donaldson and Nolan Arenado—eclipsed the Red in the long-ball department.

Nonetheless, Frazier is a durable power producer who plays solid defense at a position where players who do both aren’t easy to find. He’d be a less-attractive asset at first base, where his .293 TAv would rank in the middle of the pack. The most likely destination here is a club that could use an upgrade at third—although left field might be a remote possibility, as well, if a team prefers Frazier’s relative affordability to its options in free agency.

Along those lines CBS Sports’ Jon Heyman wrote Monday that the White Sox and Indians are the clubs most aggressively pursuing Frazier, with five others “believed to have some involvement or interest.” The White Sox last week acquired Brett Lawrie, a potential everyday third baseman from the A’s, but Lawrie could also play second, ahead of Carlos Sanchez and Micah Johnson. The Indians, meanwhile, are projected to start the slick-fielding-but-light-hitting Giovanny Urshela at the five spot, with Chris Johnson the primary backup now that Lonnie Chisenhall has transitioned to the outfield. MLB.com’s Mark Sheldon heard that the Buckeye State rivals had trouble “finding a match” at the Winter Meetings, so the Tribe will likely need to bump its offer to compete with a crowded field of suitors.

The five other teams identified by Heyman were the Nationals, Royals, Dodgers, Rangers and Angels.

Washington recently traded Yunel Escobar to Anaheim, and both teams now have the capacity to play Frazier at third base or in the outfield, with his hypothetical position on the Nats depending on their confidence in Danny Espinosa, Trea Turner, and Jayson Werth. Escobar could slide over to the keystone, presently occupied by Johnny Giavotella, to accommodate Frazier in Orange County.

The Dodgers, Rangers and Royals are seemingly set at the hot corner, with Justin Turner, Adrian Beltre, and Mike Moustakas, respectively, but the pictures for two of them are somewhat murky. In Chavez Ravine, Turner is coming off of microfracture knee surgery, and his status for Opening Day might be uncertain, even though both he and the Dodgers expect him to be back to 100 percent come spring training. Meanwhile, in Texas, Beltre is only signed through 2016, so Frazier could see time at first and in left initially, before moving back to third base in 2017. The Rangers have Joey Gallo waiting in the wings, but adding Frazier could make the young slugger an outstanding trade chit, the sort of piece with which Jon Daniels would have to part if he hopes to acquire catcher Jonathan Lucroy.

You need to be logged in to comment. Login or Subscribe
lipitorkid
It would be incredible for the Angels to sign Frazier. However, I just don't see how they can make the trade. They have nothing in the minors worth Frazier. Nor can they afford to trade an everyday player or pitcher for him.
Reply to lipitorkid
NYYanks826
Mark Melancon is starting to remind me of pre-collapse Jim Johnson. Buyer beware.
Reply to NYYanks826