Soon after the Cubs were eliminated from the playoffs, Theo Epstein made it clear that he wanted to take a good team and make it great this offseason. Epstein pointed to four areas of weakness: starting pitching depth, outfield defense, contact/situational hitting, and controlling the running game—and plainly stated that this winter would be spent addressing those needs in particular. After filling their 40-man with some under-the-radar bullpen arms, Epstein and the Cubs have with the Lackey signing begun in earnest to take their team to what they hope is an elite level.

Before trying to understand why the Cubs went this route, let’s get the negatives of this signing out of the way.

Lackey will pitch with the Cubs in his ages 37 and 38 seasons. He's coming off 218 of the best innings of his career. So not only are the Cubs paying for a pitcher who is pushing 40, they’re buying high. But neither the length nor cost will handcuff the Cubs, this year or beyond. While it would be nice for Cubs fans if their team could outbid everybody for guys like David Price and Zack Greinke, this signing is as clear a signal as there can be that they just aren’t at that level yet. As Theo Epstein told local Chicago beat writers regarding Price’s signing with the Red Sox:

Obviously, it was a big contract and they’re a little bit more fully developed and fully realized from a payroll standpoint now – and it’s a place we hope to be in several years. Right now, we just couldn’t compete at that level.

When the Cubs finally get their own big TV contract—likely in 2020—they’ll be “fully realized,” as Epstein put it, at least financially. At that point you shouldn’t hear much talk about the need for financial flexibility, but right now that’s what this team needs. They have other holes to fill, and while Lackey is a bit older, he fills a major need, could do so at a very high level, and keeps the team from investing in a risky, long-term arm while also keeping that option open when more funds are available in future offseasons.

So, how good has Lackey been, and how much of an outlier was last season? Here's how he matches up against other second-tier free agent starters this winter, since 2013:

Lackey isn’t going to blow anyone away with his strikeout numbers, but he doesn’t walk many, he’s going to eat innings, and he’s all about that run prevention (his 119 ERA+ during that span is 19th in all of baseball for pitchers who have thrown at least 400 innings in that span). Since returning from Tommy John surgery, his numbers—both the peripherals and the run prevention—are nearly identical to those preceding his first free agency. Back then, nobody questioned his bona fides.

Old Lackey does have some new tricks. His horizontal release point for all his pitches has drastically been altered. 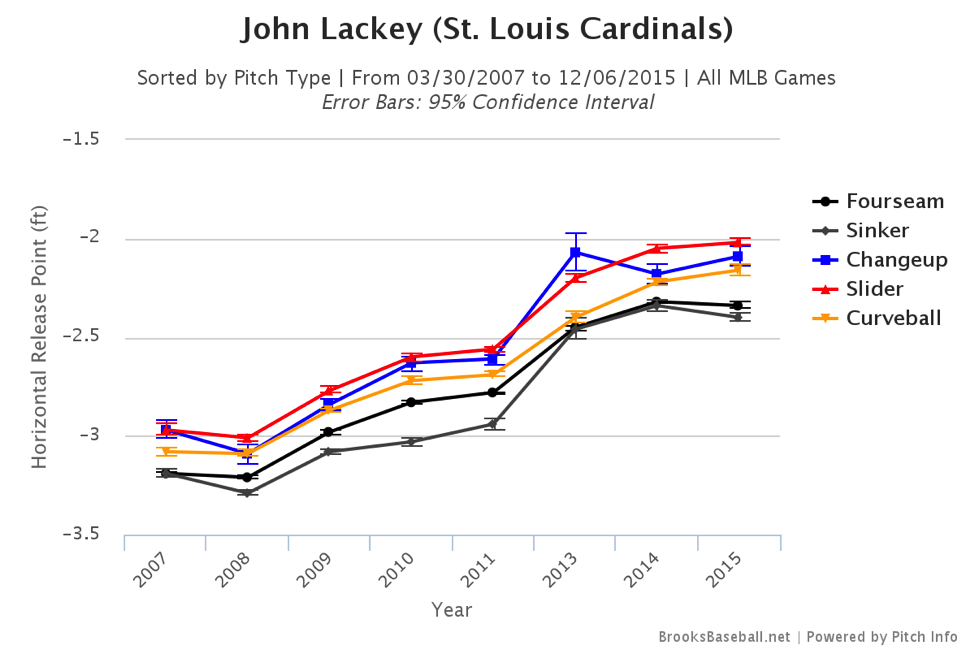 The change in release point is something Lackey actually messes with throughout the season, as many Cubs told me during the playoffs that his arm angle was very different from when they faced him in the regular season. They bemoaned how difficult it was to prepare for a change like that. As one pro scout put it, “He varies his arm angles, mixes pitches, keeps hitters off balance, and he isn’t afraid to make hitters uncomfortable, something Cubs pitchers struggled to accomplish in the NLCS.” Lackey is also throwing harder of late, with an average four-seam fastball that approaches 93 mph; he was below 92 with the Angels.

And, of course, Lackey always eats innings. He failed to complete at least six innings just five times in 33 starts last season. Compare that to the Kyle Hendricks and Jason Hammel—who (partly by design) each made 17 starts of fewer than six innings, and who currently hold the final two spots in the Cubs rotation—and it quickly becomes clear how important Lackey will be to unburdening a bullpen that was often overused last summer.

Perhaps the most polarizing aspect of Lackey is his demeanor. There are those who see his fiery attitude on the mound—like barking at his manager Mike Scioscia in the 2009 ALCS—and wonder if that will play well in a Cubs clubhouse that was praised for its pleasant mix of youth and veterans in 2015. Yes, Lackey is a no-nonsense type person. He won’t let teammates off the hook if he believes they aren’t going about business the right way, which could rub some the wrong way.

The Cubs front office has been very careful not to introduce toxic members into their clubhouse. It’s important to recognize the history many in this organization have with Lackey.

Manager Joe Maddon was on the Angels bench for Lackey’s first four seasons. David Ross and Jon Lester spent numerous seasons with him in Boston, with Lester developing a very close relationship with him. And, of course, Epstein was the one who signed Lackey to a five-year, $82.5 million deal prior to the 2010 season. It's safe to suggest they all must feel that his attitude won’t disrupt things at Clark and Addison. (In fact, there are many who believe the Cubs could actually use a little more toughness and brashness in their clubhouse.)

The team was reportedly pursuing Jeff Samardzija aggressively at one point; relative to his five-year, $90 million deal, this looks like a clearly better option. Epstein didn't just list one area his club needed to improve; he listed four. This addresses one, and leaves plenty of flexibility to address the other three. —Sahadev Sharma

Even prior to relocating to a much tougher home ballpark, the 37-year-old was an obvious regression candidate from a fantasy standpoint. By DRA, Lackey has delivered virtually identical performances in back-to-back campaigns, which you would never know from his ERA. The veteran right-hander managed to trim more than a full run from one season to the next, moving from a rather pedestrian 3.82 in 2014 to a sparkling 2.77 mark. He finished as the ninth-most valuable fantasy starter in NL-only formats (earning $20) in 2015.

As Admiral Ackbar of the Rebel Alliance famously said, “it’s a trap.” Out of the 141 pitchers who eclipsed the 100-inning plateau in 2015, only Nick Martinez and Doug Fister boasted a larger gap between their ERA and DRA than Lackey (1.36 runs).

So the stellar ERA is an aberration, due for regression toward his career mark (3.92). But fantasy owners shouldn’t let that deter them from investing in Lackey as a surefire top 40-50 fantasy starter in 2016. Despite his advanced age and distressing change in scenery, the raw skills—especially his average fastball velocity and whiffs-per-swing rate on his heater (which grades out above league-average)—remain vintage. —George Bissell.

You need to be logged in to comment. Login or Subscribe
Muboshgu
Thanks for the Admiral Akbar reference. Need at least one Star Wars reference per day (at least until Dec 18) please.
Reply to Muboshgu