Jeff Samardzija’s talent has always been tantalizing. It’s what made the Cubs—then, a team notoriously averse to spending money on top amateurs—sign him away from the NFL with a five-year, $10 million deal back in January of 2007. It’s what made them offer him a five-year, $85 million extension in the middle of the 2014 season, even though he had entered that season with a below-average career ERA and, by BRef's measures, 3.1 career WAR. It's what made Samardzija, before the 2015 season, look so smart for turning it down. Surely, it seemed, he would sign for $100 million-plus somewhere. The talent was just too good, and the results—in the years when he put everything together—were even more promising still.

Well, Samardzija’s talents are still too obvious to ignore, and we’ll get to them soon. But in a market saturated with elite pitching, and after a rough 2015, it turns out that five years and $85 million dollars was about the best Samardzija was going to get. He wisely accepted a deal just above that from the San Francisco Giants, who need pitching badly (we’ll get to that soon, too). So how do we feel about all of this? Well, a great deal of that depends on how you feel about Samardzija’s 2015, and what you think it means for his future. The top-line numbers weren’t too pretty. In case you’ve averted your eyes, here they are:

That’s not great. In fact, some of it is quite bad. Which is a shame, because Samardzija can be quite good. When he’s pitching well, Samardzija is striking out about 23 percent of batters, walking no more than 8 percent (lost amid the horrid 2015: his walk rate was actually the second-best of his career), and getting groundballs about 45-50 percent of the time. So what to make of that disastrous 2015? There’s a school of thought that lays a fair portion of the blame on White Sox pitching coach Don Cooper, who preaches attacking the zone early in the count—particularly against the opposite hand—and then coming off toward the end of the sequence. That’s an approach that forced Samardzija to invert his usual order of business. Before 2015, he tended to start lefties middle away, and righties down and away (with some pitches, yes, over the middle to establish strike one): 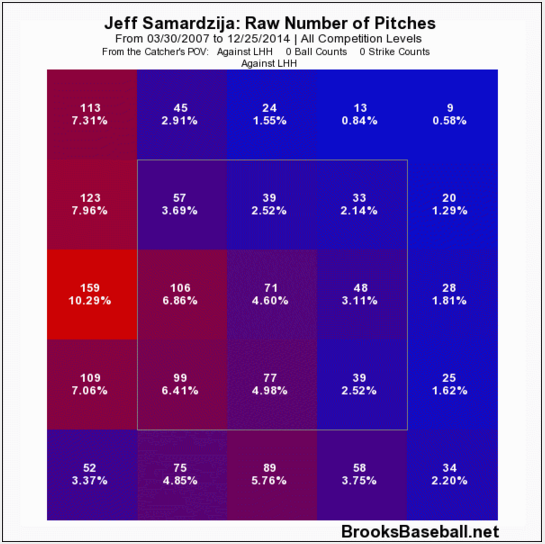 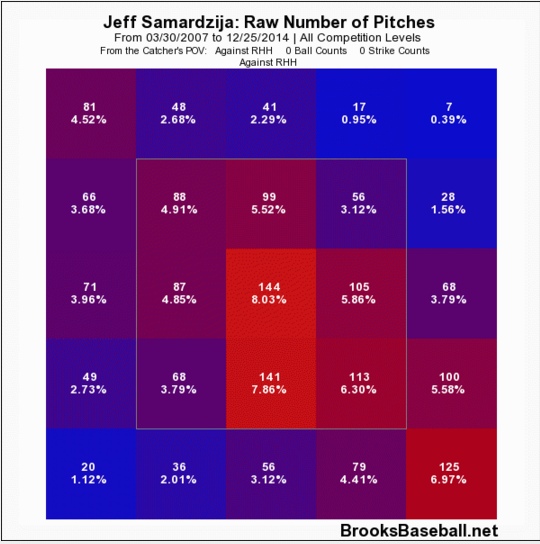 Under Cooper’s tutelage, that changed. 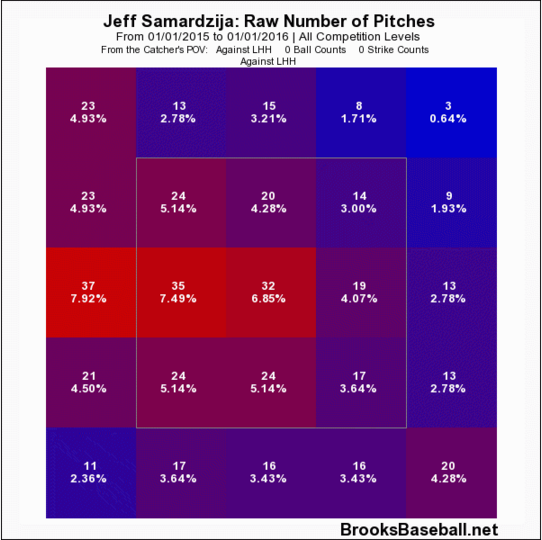 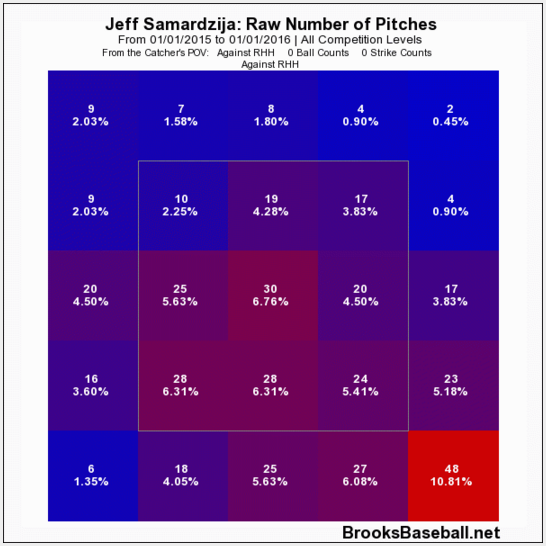 Suddenly, Samardzija started coming into the zone against lefties to start his sequences. While the adjustment against righties was less dramatic, he did lose the inside pitch he occasionally relied on, and focused less on the lower corners of the zone in favor of hard down and away or dead center. But back to his pitches to lefties, because you know what? Lefty hitters loved those new pitches, slugging .513 against Samardzija in 2015, after touching him for just .435 over the course of his career. And a great deal of that damage came on the outer third of the plate. After, in previous seasons, finding themselves just missing pitches out of the zone, in 2015 they made hard contact whenever they got their arms fully extended. Check out that big patch of red on the outside third of the chart on the right—that’s the 2015 season. 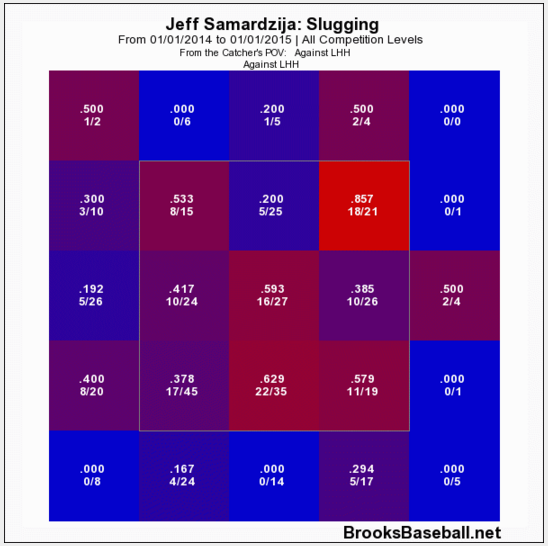 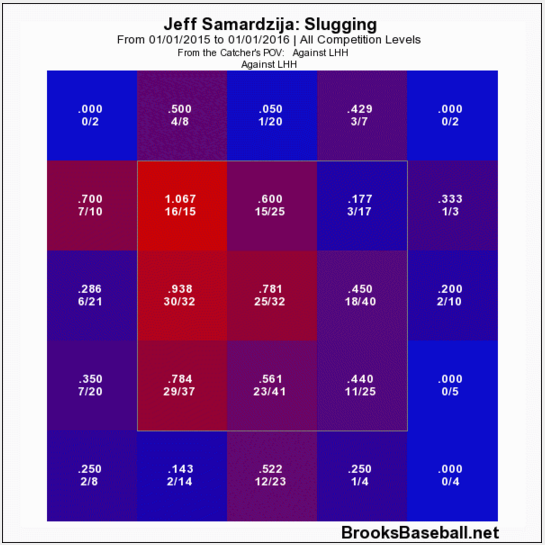 Anyway. So there might be something to the Cooper story, and it’s possible Samardzija will rebound a little bit just by being under the tutelage of Dave Righetti. But it’s also possible that Samardzija is one of those guys who’s never fully able to get things together for himself, despite great coaching, and thus also never fully able harness his impressive physical tools to their greatest potential. That would be true even if he hadn’t had a bad year this past season: To this point, his peak WARP is 3.8 in 2014, and over the course of four years as a starter he's been worse (by adjusted ERA) than the average starter. It’s possible—with Samardzija, it’s always possible— that he has a dominant year coming, but on the wrong side of 30 that bet isn’t close to a sure thing.

The bet gets even worse once you take a look at the across-the-board drop in velocity we saw from Samardzija in 2015, blanche, and then note that the drop didn’t begin last year. In fact, Samardzija’s fastball velocity has dropped every year that he has been a starter. (His secondary pitches gained a few ticks between 2013 and 2014, but in 2015 they joined his hard stuff in decline.) 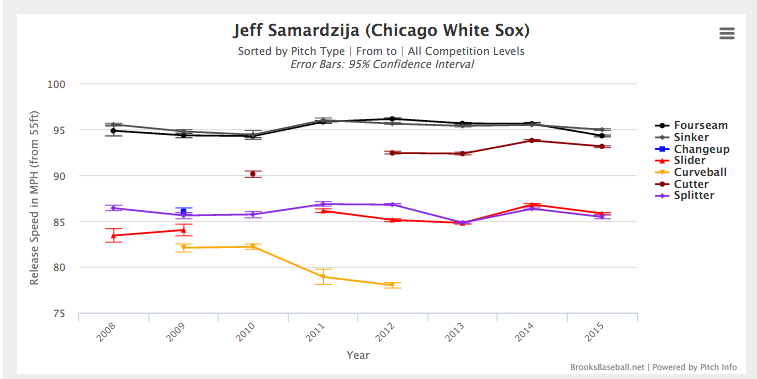 For now, this just falls into the category of “thing to keep an eye on”, especially as Samardzija enters the later-middle part of his 30s toward the end of his contract. Pitchers decline in velocity all the time, and if he keeps his fastball velocity in the low 90s and the separation between that fastball/splitter combo at about 10 miles per hour, he should be able to pitch effectively through the end of this deal. Will he be able to do that? I don’t know. Hence the challenge of making a baseball team.

So, taken together, does the signing make sense for the Giants? The answer is a resounding perhaps, with the balance of probability leaning toward no. The team is clearly targeting pitching—Madison Bumgarner can’t throw a 2014 postseason every year, and the rotation after him is fairly questionable—and they reportedly missed out on the opportunity to spend a fifth of a billion dollars on Zack Greinke yesterday. While Greinke would have given the Giants an immediate boost at the top of the rotation, Samardzija isn’t a bad fallback at all, and might end up being quite a good one. But here’s the thing: he hasn’t ever consistently been a very good pitcher, and that’s what he needs to be for this deal to make sense. (Ideally, given his severe platoon disadvantage, it'd also be nice to see him in a park with more lefty suppression than AT&T.)

In order to meet the contract’s value, he needs to post two, maybe 2.5 wins per year over the life of the contract for the deal to be worth it. PECOTA isn’t confident he’ll do so, projecting just 5.9 WARP for him over the life of the contract. As has always been the case with Samardzija, it's easy to dream on the tools, on the health, on the strength, on the athleticism, on the fact that he's still at least relatively new to all this. That’s what the Giants are betting on. But he's 31. For now, that's still dreaming.

People have been waiting for Samardzija to become an ace for a long time, and he hasn’t managed to do it yet. In fact, he hasn’t yet made a particularly compelling case that he is, at present, even an average major-league pitcher. (Seventy-seven pitchers with at least 400 innings since 2012 have a better ERA+; that's more than half the league, and includes a long list of names that would seem like insults were we to list them here). And still, the chase for pitching continues, and the Giants have placed a $90 million bet on Samardzija’s upside. It could work out for them, sure, and if they pair his addition with one of Leake or Iwakuma, their rotation looks fine enough for 2016. But might not Leake and Iwakuma have made more sense than Samardzija and either?

If Samardzija keeps being the pitcher that he is, the Giants will be saddled with a bad deal and a worse pitcher. If he becomes the pitcher he could be, the Giants will have a steal on their hands. I’m sure Dave Righetti will be placing a phone call or two in the next few days as he and his new pupil will get to work. That’s good, because they have a great deal of it ahead of them..

With the notable exception of Tampa Bay right-hander Alex Cobb, who ended up missing the entire 2015 campaign due to an elbow injury, there wasn’t a more prominent AL-only pitcher bust than Samardzija this past season.

The precipitous decline in both Samardzija’s strikeout and ground ball rates, in conjunction with a dramatic spike in home run-to-fly ball ratio (serving up a league-high 29 taters) and a slight dip in average velocity, are the most pressing concerns from a fantasy perspective regarding his lackluster Windy City experience.

Despite the unmistakable downturn in his statistical profile virtually across the board, there is an equally compelling case to be made that he’s was especially unlucky during his White Sox tenure. In retrospect, the uninspiring 4.96 ERA looks especially bloated. Among starters who accrued at least 100 innings, only three pitchers (Chris Tillman, Justin Verlander and Kyle Kendrick) recorded a larger differential between their Deserved Run Average and their actual ERA than Samardzija (0.65 runs).

Is the glass half-full or half-empty? Will the relocation to San Francisco provide the 31-year-old with a new lease on life, or merely invoke overpaid/decline phase Barry Zito comparisons/flashbacks over the next half decade? We don’t know really, just yet. Regardless of the state of the metaphorical glass, Giants pitching coach Dave Righetti is undoubtedly the man holding the pitcher of water over it. As my colleague Rian Watt noted in his earlier analysis, the complex issue clouding Samardzija’s long-term forecast, which we simply can’t predict at this point in time, is what adjustments he and Righetti will make and how they will impact his performance.

On the surface, feasting on a weaker slate of senior circuit lineups and the transition to the cavernous ballparks of the NL West should set up Shark for a legitimate bounce-back campaign in 2016. Samardzija’s durability and the sheer volume of innings he provides are valuable and even a modest rebound in strikeouts and ERA puts him back in the conversation as a top-40 fantasy starter. —George Bissell

You need to be logged in to comment. Login or Subscribe
rweiler
It cost the Giants their 1st round pick as well, but I sill to like this deal better than the Grinke deal as it leaves the Giants $10m/year to sign a LF where they also have a big hole unless Parker and/or Williamson are for real. And even if they are, it's an awfully big assumption that Pagan, Pence, and Blanco will be healthy all year.
Reply to rweiler