The ALDS against the Royals is probably a time that the Astros fans would like to forget. So forgive me for taking you back there for a second.

The team was six outs away from knocking the Royals out in Game Four before a miraculous and furious comeback by the eventual World Series champs forced a winner-take-all Game Five. You already know about the potential rally-killing double play ball in the eighth inning that Carlos Correa missed, which helped bring the Royals back from the dead.

But that wasn’t the only Astros loss during the series decided by mere inches. Game Two also had a pivotal moment decided by a more subtle pitfall—Houston’s outfield positioning. It was the bottom of the seventh inning and the game was even at 4-4. Alcides Escobar led of the inning against Will Harris and hit a fly ball that landed in front of the warning track in right center field, just beyond the reach of both center fielder Jake Marisnick and right fielder George Springer. Escobar legged out a triple and scored the game-winning run later in the inning.

Miscommunication between Marisnick and Springer was partly to blame for the ball dropping in; Springer looked to have a bead on the ball but pulled off at the last second in favor of his teammate. But what made it such a difficult play in the first place was how shallow Springer was playing in right field against Escobar.

Despite the amusement and strategic implications that #EskyMagic provided during October, the fact remains that Alcides Escobar doesn’t feature much in the way of power. He had the worst Isolated Power among qualified hitters. As far as slap-hitting middle infielders go, he is among the slappiest. Using Bill Petti’s invaluable spray chart tool, I was able to filter fly balls and line drives hit to the right of straightaway center field at a distance of 120 to 225 feet (i.e. shallow center to shallow right field). No right-handed hitter has hit more such balls since the start of 2014 than Escobar.

One fly ball over the head of Springer shouldn’t discount Houston’s overarching strategy, especially considering Escobar said after the game that he had just been trying to make hard contact. There had been no concerted effort to go the other way. It became somewhat of a story given that shallow outfield play by the Astros was something the Royals were familiar with. Back in July when the two clubs squared off in Kansas City, the Astros had specific outfielders playing shallow—usually to the opposite field—against various Royals hitters. 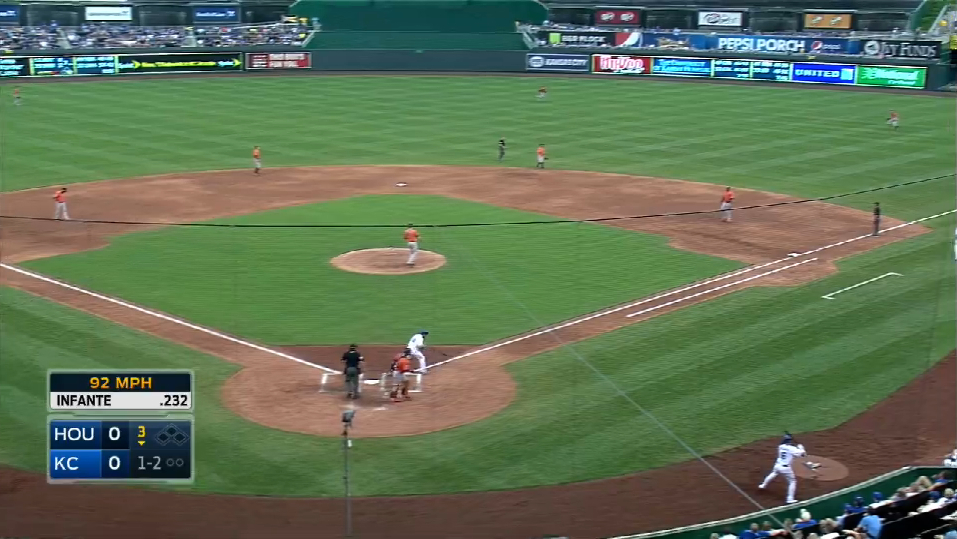 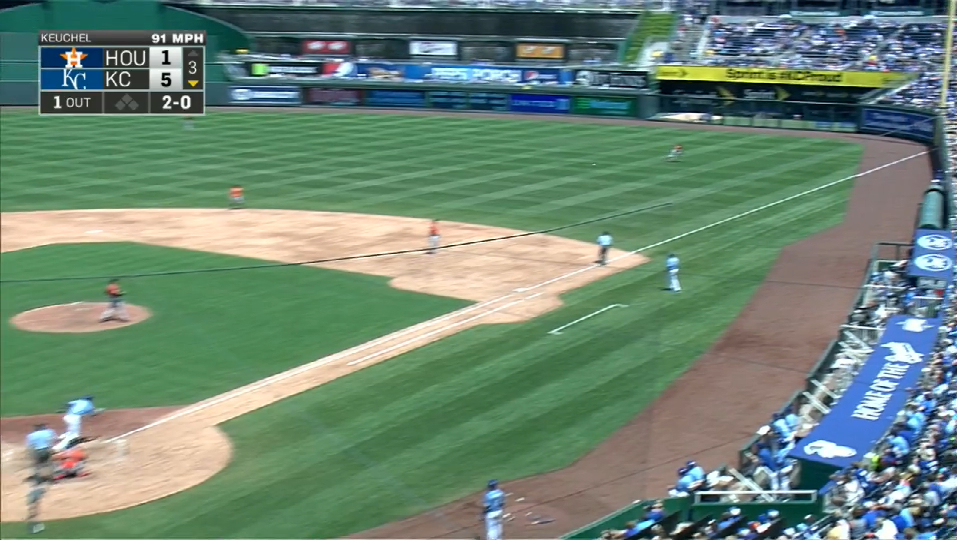 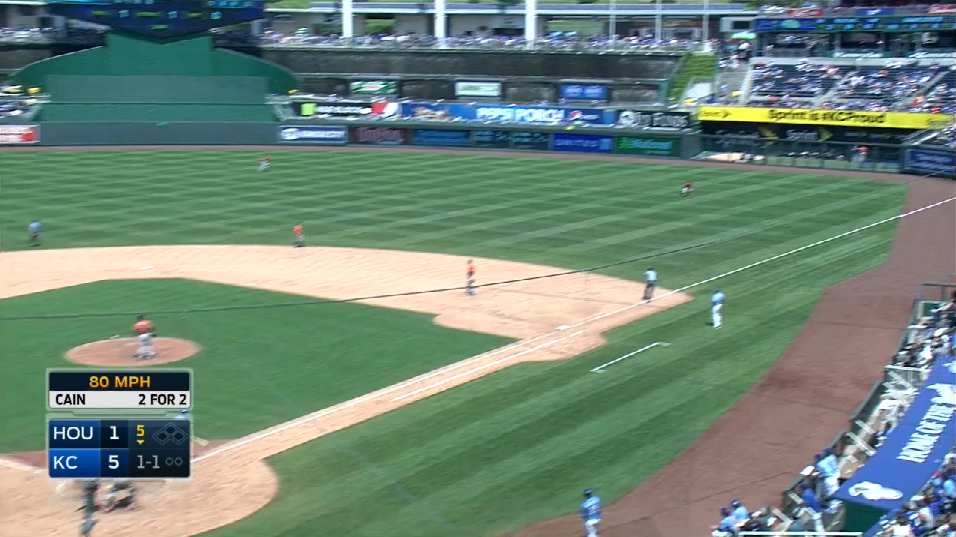 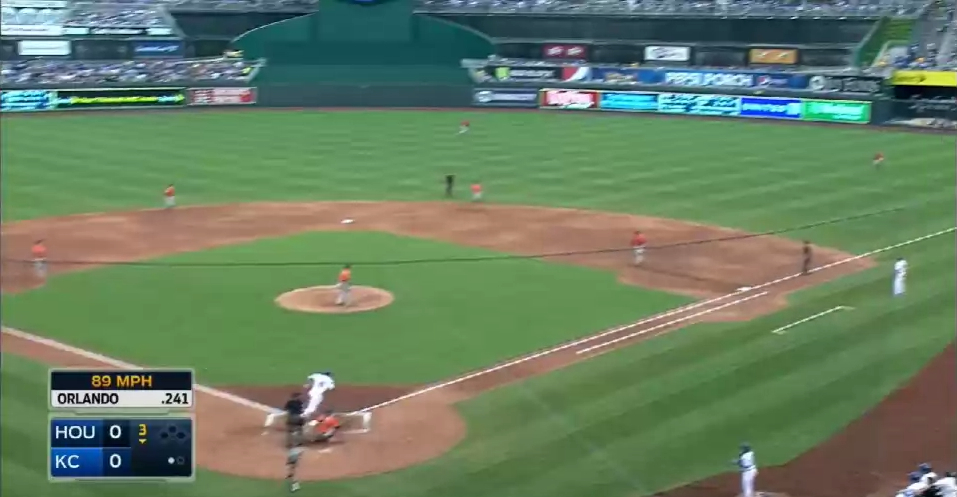 Astros vs Mike Moustakas (pull side) 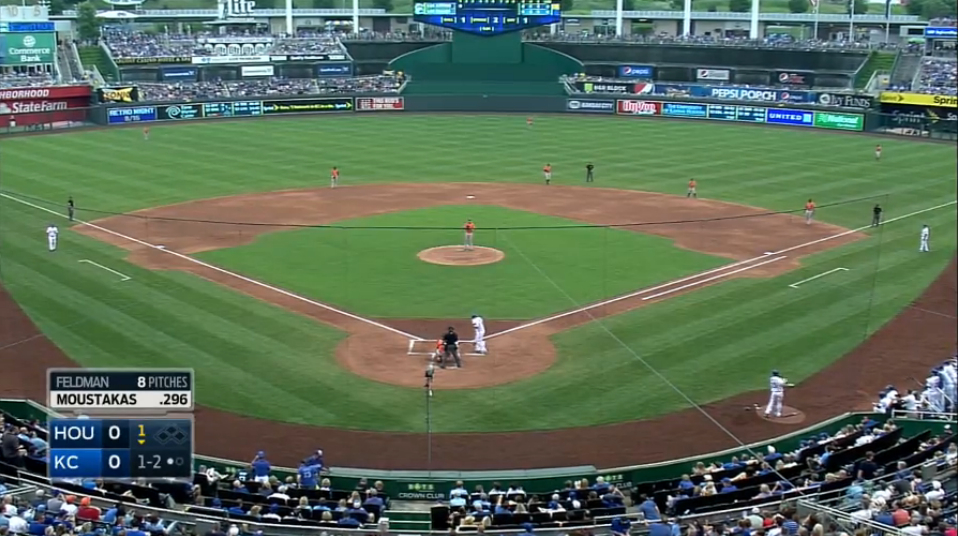 Astros vs Jarrod Dyson (pull side; left fielder was playing at similar depth) 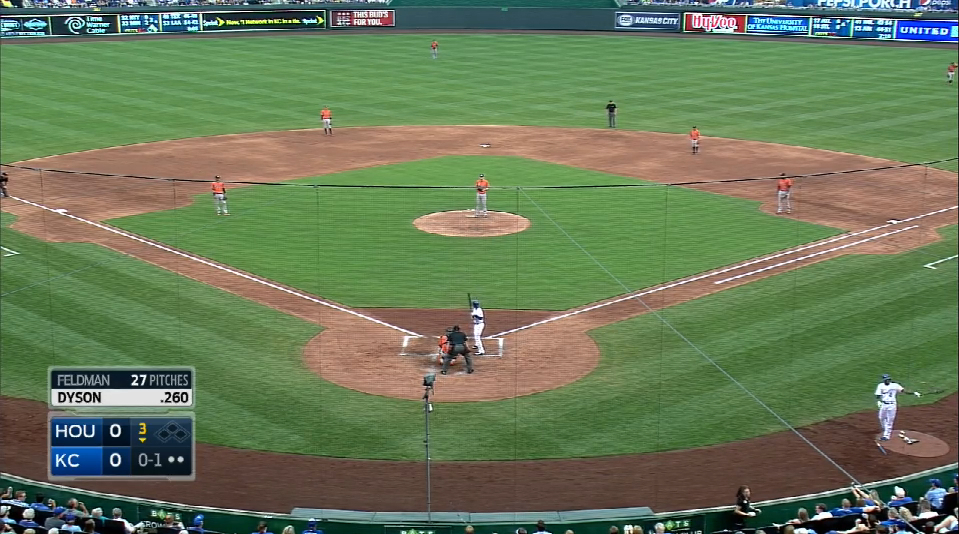 Then there was Escobar, against whom the Astros were perhaps the most aggressive with their shallow positioning. It stood out the most on July 25th, when right fielder Colby Rasmus robbed Escobar of a sure hit on a soft liner.

As I’ve written about on these pages before, the Astros were among the most aggressive outfield shifters this season. It appears that aggression applied not only to positioning in the gaps but also positioning by depth. Using such unorthodox positioning requires significant commitment from players—a lesson the Astros brass has learned before—but ultimately the defense is just trying to play the percentages. That Astros players recognized the bigger picture even in the aftermath of Escobar’s triple in Game Two indicates that the buy-in is there. Sometimes you just tip your cap to your opponent.

“[Springer] was playing pretty shallow—we were playing him in the same spot—so I think it was more placement than anything," Marisnick said. "It's been working for us all year. Every once in a while you get beat by it, but I don't think we're doing anything wrong. There are many times we've taken hits away doing it, so I don't think there are any bad feelings about it at all."

It is worth noting the caliber of hitters the Astros were playing so shallow. Escobar, Escobar, Infante, Dyson, Rios, Orlando. Those aren’t exactly the most frightening bunch of hitters, and there were other instances of the Astros taking away bloop hits from similar hitters. Consider Ryan Goins and Anthony Gose:

However, as you saw earlier, the Astros did implement it to a lesser degree to Lorenzo Cain and Mike Moustakas. They won’t be playing exceedingly shallow against Miguel Cabrera anytime soon, but the strategy isn’t relegated to only slap hitters devoid of power. Here’s another instance of a shallow alignment the other way, this time against Nick Castellanos.

The next question is whether this showed up in the numbers. According to Baseball Savant, Astros pitchers had the second-lowest BABIP on fly balls and line drives to the outfield hit between 120 and 225 feet last season. It’s difficult to say with certainty how much can be attributed to the positioning—we’re still dealing with a lot of hard line drives that no outfielder is going to catch under any circumstance—but there might be something there.

Of course, when you’re talking about putting your outfielders somewhere shallow, there’s the flip side of the potential costs. Deep balls are more likely to fall for extra-base hits, a cost the Astros weigh in their batter-specific alignments. Surely they are considering whether the hitter has the platoon advantage, the count, the specific dimensions of the ballpark and the defensive skills of their own players. Having an array of athletic outfielders like George Springer, Colby Rasmus, Carlos Gomez and Jake Marisnick only helps.

But while the Astros were able to take away short flies and liners, it might have come at a price. Using a similar Baseball Savant search, I looked at team BABIPs on fly balls and line drives to the outfield hit over 300 feet last season. The Astros had the fifth-highest mark. Clearly these are very rough calculations. There is still a ton of fluctuation involved in BABIP to such specific areas of the field. It doesn’t necessarily make this a bad strategy. In fact, Astros pitchers allowed the 11th-fewest non-four bag extra-base hits last season and had their overall BABIP on balls to the outfield drop six points from 2014 and 10 points from 2013.

Playing particular hitters shallow or deep isn’t exactly a new thing. But the aggressiveness and frequency with which the Astros have done it makes it stand out more than your typical positioning. Take a look at how some other teams that are generally regarded as aggressive shifters have positioned their outfield against Escobar this season.

The Astros have more advanced tools than we do to evaluate defense and certainly have a better assessment of what type of effect their outfield positioning had this past season. For us, how much their tendency to play certain hitters extremely shallow helped or hurt is unclear. One thing is for sure, though. The Astros showed us another way that they are willing to position their fielders more aggressively than any other team in baseball. By now nobody should be surprised.

You need to be logged in to comment. Login or Subscribe
timber
I clicked on this in the hopes of finding out who The Outfield Creep is. Imagine my disappointment.
Reply to timber
wrayzerblade
It seems like "beating the shift" is more costly when you are shifting the outfield aggressively in rather than what has become the traditional infield shift. One of the few ways to beat the infield shift is with a bunt single, which has the best possible result of likely being a single. However if you get burned by a player who hits the ball 300 feet against an aggressive outfield shift, it could be a triple or even an inside the park home run. The percentages probably say you are better off in the long run but I wonder if the fear of getting burned is why we typically see more outfield shading than shifting.
Reply to wrayzerblade
BrewersTT
This sounds right to me. A difference that should be reassuring is that it's a lot harder to beat the strategy by deciding to hit a deep fly than it is to decide to bunt or hit to the opposite field.
Reply to BrewersTT