When the Blue Jays broke camp last spring, they made a pair of roster decisions that raised a few eyebrows. The devastating ACL tear that Marcus Stroman suffered forced Aaron Sanchez—who many had presumed would start the season as the team’s setup man—into the starting rotation, which left the Blue Jays devoid of bullpen depth. The organization prioritized its need at the major-league level over its player development, aggressively promoting two hard-throwing 20-year-olds—Miguel Castro and Roberto Osuna—to the major-league club.

It turned out being a tale of two seasons. Castro couldn’t throw a strike to save his life, and opposing hitters mashed the pitches when he did. He was optioned to Triple-A in May and shipped to Colorado in the Troy Tulowitzki trade. On the other hand, Osuna went on to post one of the best age-20 seasons ever by a reliever and anchored a bullpen that turned out to be a strength for the Blue Jays down the stretch.

You never expect the guy who hasn’t thrown a pitch above High-A to emerge as a shutdown closer, but a live-armed starting pitching prospect with the makings of a quality secondary pitch enjoying success out of the bullpen isn’t the most shocking thing ever. Osuna was young and inexperienced, but there was reason to believe his stuff could play up in short bursts. It was just a matter of harnessing it in all a different role and a little earlier than what had been originally planned.

Arguably the more surprising breakout in Toronto’s bullpen last season was that of another former-starter-turned-bullpen-stud, Liam Hendriks.

At the start of the decade, when the Twins were the kings of the low-walk, high-contact starting pitchers, Hendriks was the quintessential Minnesota pitching prospect. The young Aussie’s minor-league track record outpaced his scouting report, with his history of gaudy strikeout-to-walk ratios in the minors a product of impeccable control rather than overpowering stuff. Back in 2011, Kevin Goldstein ranked him as a two-star prospect and wrote:

Even in a system loaded with control specialists, none can match Hendriks, who treats walks as if they're a criminal offense. He sits at 88-90 mph with his fastball while touching 92, and can mix in a slider, curveball, and changeup, all of which rate as average offerings. All of his pitches play up due to his ability to place them exactly where he wants them, and he mixes his pitches for maximum effectiveness.

His ability to fill up the strike zone turned into a double-edged sword upon his arrival in the majors. Hendriks was still allergic to free passes, but major-league hitters teed off on his hittable offerings. He served up 30 home runs in 156 innings (1.7 HR/9) over the course of three seasons with the Twins, including a 16-start campaign in 2012 in which only Aaron Cook and Bartolo Colon ceded more contact to opposing batters (Min. 1000 pitches).

Hendriks was DFA’d by the Twins after the 2013 season, and over the next year he was the property of four different teams. The Cubs and Orioles each claimed him off waivers during the offseason before he eventually found a home in Toronto to start the season. After spending the majority of the first half in Triple-A, the Blue Jays packaged him with Erik Kratz to Kansas City in exchange for Danny Valencia at the trade deadline. Toronto re-acquired him last offseason in a one-for-one deal for Santiago Nessy. Nobody considered Hendriks much more than organizational depth; his 2015 BP Annual comment was an apt summation of his career-to date.

His career was in a funk and the Blue Jays already knew what would happen if they gave him another shot at the rotation. Instead, they stuck him in the bullpen in 2015, where he thrived in middle relief. Osuna got all the headlines for racking up the saves but Hendriks was every bit as effective as his rookie teammate.

The home run issues disappeared for Hendriks. He took massive strides forward with his strikeout rate without giving back his pinpoint control (his walk rate was seventh lowest among qualified relievers). The 26-year-old went from being a starter who was another bad season or two away from searching for employment overseas to posting a cFIP that suggested his true-talent level was that of a top-30 reliever in the game. That pegged him around the same level as bullpen stalwarts like Ken Giles, Koji Uehara, Trevor Rosenthal and—of course—Roberto Osuna. If you’re searching for an explanation of the turnaround Hendriks underwent, a trip to his Brooks Baseball velocity page is a good place to start. 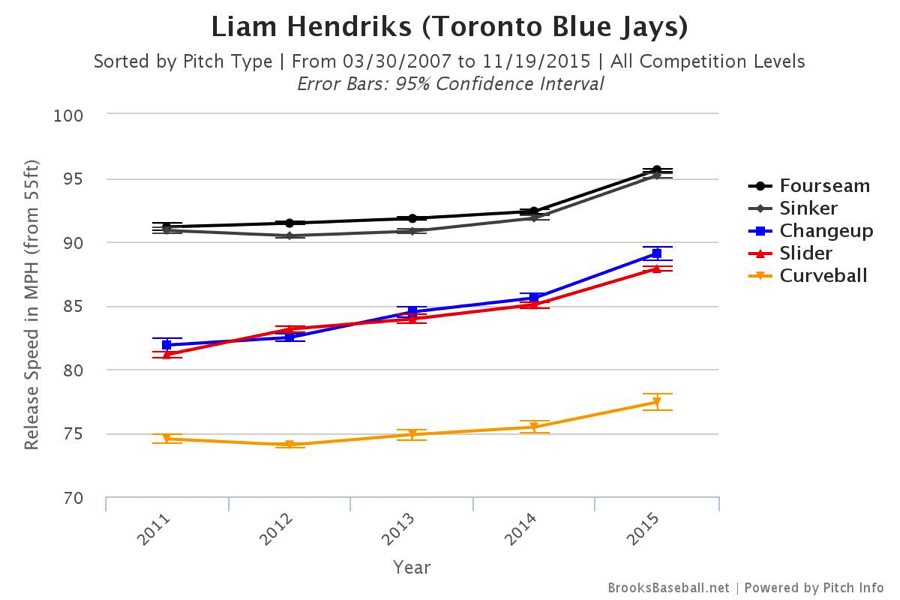 If that velocity spike appears unusually high at first blush it’s because it is. Hendriks threw his heat nearly four full ticks faster than what it averaged out of the starting rotation from 2011-14, which is the third-highest velocity gain in the PITCHf/x era among pitchers who have thrown at least 200 fastballs as both a starter and reliever. Tommy Hunter and Daniel Bard are the only two pitchers who have experienced a more pronounced gap between their velocities as starter and reliever.

The average pitcher in the sample gained about 0.9 mph of fastball velocity in the bullpen, so Hendriks’ stuff played up significantly more than that of your typical bullpen convert. He claims part of the additional velocity has to do with core strength added by doing Pilates with his wife during the winter. Maybe that had some effect. I’m not going to doubt him. But regardless of how much of his extra velocity came from additional pelvic curls and how much of it had to do with him not having to worry about keeping some juice in the tank, velocity only came easier for Hendriks as the season wore on; he averaged nearly 97 mph with his four-seamer in September and even hit 99 mph during a game against the Red Sox.

As far as the rest of his repertoire, Hendriks basically junked the changeup that he had previously used as a third offering and only sprinkled in the curve as a show-me pitch. For Hendriks, 93 percent of his pitches were either a variation of his fastball or his slider. That his slider was averaging 90 mph by the end of the season certainly played a significant factor in the pitch emerging as a weapon he used a little more than one out of every four pitches. However, it was his refined command of the slider that really helped the pitch take the next step forward.

In 2015, Hendriks buried his slider low and out of the strike zone more consistently than he had in the past, with fewer sliders left over the heart of the plate. Further, take notice of how his sliders this past season are more tightly clustered (i.e. the blue spots) around a single area than in the past. Hendriks was not only throwing his slider to spots where batters were less likely to touch it, but he was better at locating it where he wanted.

The result was a slider that drew whiffs at an above-average rate for the first time and suddenly started generating grounders nearly 60 percent of the time opposing hitters put it in play. His slider went from being a below-average pitch to a weapon he could lean on late in counts, an improvement even more impressive when you consider he nearly doubled his use of the offering in 2015 compared to 2011-2014.

Pair that quality secondary pitch with a fastball that gained nearly four full ticks of velocity, an inch of rise and had the third-lowest TAv among four-seamers last year and it’s not difficult to see how Hendriks was able to thrive in 2015. It’s a simple two-pitch mix that plays up due to his ability to spot each pitch wherever he pleases and should allow him to carve out a more prominent role in Toronto’s bullpen next year.

(Assuming, of course, that the Blue Jays can fill out the back end of their rotation without him. Earlier this month at the GM Meetings, Blue Jays interim GM Tony LaCava said that Osuna, Hendriks and Aaron Sanchez are all candidates to begin the season in the team’s starting rotation. This was before the Blue Jays re-signed Marco Estrada, but the back of their rotation remains shaky as currently constructed. Given Hendriks’ previous failure as a starter and his lack of a pitch that can neutralize lefties, he seems to be the least likely of the three to move back into the rotation if Toronto doesn’t acquire help from outside the organization.)

We’ve seen more than a handful of occasions during recent seasons, where a starting pitcher whose career stalled made the transition to the bullpen and started dominating. Wade Davis and Andrew Miller have been the poster boys for this. Zach Britton emerged as a top-flight closer in Baltimore. Brett Cecil made the transition to Toronto’s bullpen back in 2012 and he was arguably better in 2015 than either Osuna or Hendriks.

Obviously, not every failed starter turns into Davis or Miller or even Hendriks. It’s not a given that a starter’s stuff will play up in such spurts. But Joe Blanton, Travis Wood, Zach McAllister, Andrew Chafin, Trevor May, Trevor Cahill, Randall Delgado and Brandon Maurer were all further examples of pitchers who weren’t cutting it out of the rotation and served as quality bullpen arms this past season.

We appear to be headed toward an inflated market for high-end relievers, with starting pitchers being pulled earlier from starts and teams trying to replicate Kansas City’s dominant bullpen. For teams unwilling or unable to pay such a premium on relievers, Hendriks is just another reminder of what you can find on the scrap heap if you dig deep enough.

You need to be logged in to comment. Login or Subscribe
oldbopper
I was watching the Jays play this summer and Hendricks came in. I remembered a replacement level batting practice machine and was struck by the TV gun showing 95-97. My thought was that the gun was broken, because I had never seen anybody ramp it up by so much. I have been equally baffled by the fact that Joe Blanton, Mr. Batting Practice himself, could return from Mars and actually get anybody out. It is one thing to be a failed 26 year old, Hendriks, and quite another for a 34 year old who had an historically awful season, then did not even appear in organized ball in 2014, to provide so much value as he did for the Pirates.
Reply to oldbopper