Billy Eppler continues to rebuild the Angels' infield, this time by inking his probable utility infielder.

Pennington is, foremost, a quality and versatile defender: he's partied across the infield, has dabbled with the dark arts in the outfield, and has experienced the pressures of postseason pitching. Alas, as is the case with most who can claim the last feat, he's not much of a hitter. Nonetheless, Pennington's light bat represents a legitimate upgrade over the Halos' incumbent utilityman, Taylor Featherston, whose .177 True Average in 2015 fell 40 points below Pennington's mark, itself a career-low effort. Pennington also provides the Angels with an insurance policy at second (should Johnny Giavotella fail in replicating his numbers from last season) and third base (should Kyle Kubitza and/or Kaleb Cowart succeed in replicating theirs), making him a fit on multiple levels.

If there's a nit to pick with this deal, it's the multi-year aspect. As a general rule of thumb, committing too much time or money to a bench player is a bad idea. It is worth noting, however, that Pennington's deal guarantees him less than either of Willie Bloomquist's multi-year pacts—yes, plural. Teach your kids how to play all over, folks. —R.J. Anderson

Acquired RHP Francisco Rodriguez from the Brewers in exchange for 2B-R Javier Betancourt and a player to be named later. [11/18]

“Every fair from fair sometime declines, especially relief pitchers, except for some really good relief pitchers.” That’s a quote—albeit, I hope you gathered, a heavily amended one—from William Shakespeare, and I think it applies nicely to yesterday’s trade. Relievers aren’t meant to be very good when they’re 33 years old. In fact, they’re not meant to be predictably good at all: relief pitching is notoriously difficult to project and, in general, it’s best to avoid the exercise altogether.

Except some relief pitchers are good pretty much every year. Billy Wagner was. Trevor Hoffman was. So was Mariano Rivera and so—surprising as this might seem—is Francisco Rodriguez. Last year, he threw 57 innings for the Milwaukee Brewers, recorded his best swinging strike mark (30.4 percent) in at least seven years, and ended with a nice shiny ERA of 2.21 (mostly on the back of a dominant fastball/changeup combo). In his 14-year big-league career, he’s had a FIP above 4.00 just twice (in 2009, and again in 2014). Next year, he’ll try to keep the good times rolling with the Tigers, who could use the bullpen help as they reload under new GM Alex Avila.

Let me repeat that, because it’s worth repeating as you contemplate this deal: the Tigers could use bullpen help. With marks of 4.38 and 4.37, respectively, Tigers’ relievers put up ERA and FIP marks in 2015 both that ranked second to last in the AL, and it showed up in the results: 24 times in 2015, the Tigers were tied or leading going into the sixth inning, and lost the game. Cut that number by even a third, and you’ve got a .500 ballclub.

Now, K-Rod on his own won’t fix the Tigers’ bullpen. More relief acquisitions are needed, and more than a little bit of luck besides. But for what the Tigers paid to get him—minor league second baseman Javier Betancourt, who we just ranked eighth on the Tigers’ weak Top 10, plus a player to be named later—you’ve got to like this deal for Detroit. Buying a lottery ticket for the bullpen, which is what the Tigers have done in the past, just isn’t good enough any more. It’s much better to invest in a mutual fund, and Rodriguez is the relief equivalent of exactly that. Sure, the PTBNL might swing the balance of the deal somewhat back toward Milwaukee, but I can’t imagine it’ll make a huge difference, and Betancourt was never likely to be much more than a solid utility guy anyway (he does have a nice glove).

This move also suggests, intriguingly enough, that the Tigers intend to contend in 2016. If that’s the case, look for more moves to shore up other parts of the roster: this trade is unlikely to be the end of Avila’s maneuvering. For now, all we can say is that the Tigers have the opportunity to give Rodriguez a shot for $5 million in 2016. That’s a good price for any solid reliever, and—if it works out—they can exercise his $6 million option for 2017 and expect more of the same in that year (for what it’s worth, PECOTA projects Rodriguez for 3.2 WARP in 2016 and 2017 combined, which is worth about $28 million on the open market). If it doesn’t work out, they can exercise the option anyway, trade him for a marginal prospect, and recoup some of their acquisition cost. Either way, those are good choices to purchase for the cost of a shot at a utility infielder. —Rian Watt

The fact that the 33-year-old Rodriguez, who racked up 92 saves over the last two and a half seasons in Milwaukee, will take over as the undisputed closer in the Motor City is an irrefutable positive for his fantasy value. However, the move to the junior circuit (and the loaded AL Central while we’re on the subject) is a potential drawback, which is nearly impossible to forecast at this point in time.

No matter how you slice it, Rodriguez’ statistical results remain elite. Not only has he averaged over a strikeout per inning (9.79 K/9 in 2015) every season, dating back to 2002, but he arrives in Detroit fresh off a superb campaign with the Brewers in which he posted the lowest walk rate (1.74 BB/9) of his career and recorded the eighth-best Deserved Run Average (2.24 DRA) of any pitcher in the game.

It’s tempting to look at Rodriguez’ 2.93 FIP and 83% strand rate (21st out of 131 relievers) this past year as indicators that he’s overdue for “regression” in the ERA department. However, DRA, which better estimates run expectancy than any other sabermetric statistic and currently explains about 70 percent of the runs a pitcher allows, tells a completely different story. Rodriguez surface ERA (2.21) and DRA (2.24) were nearly identical in 2015.

If there is any cause for concern, it’s Rodriguez diminishing fastball velocity, which dipped to 90 mph on both his four-seam and sinker last season. Fortunately, he changed up his arsenal, literally, by relying on the heater less than ever, leaning heavily on his stellar changeup, which generated a monstrous 40 percent whiff rate. 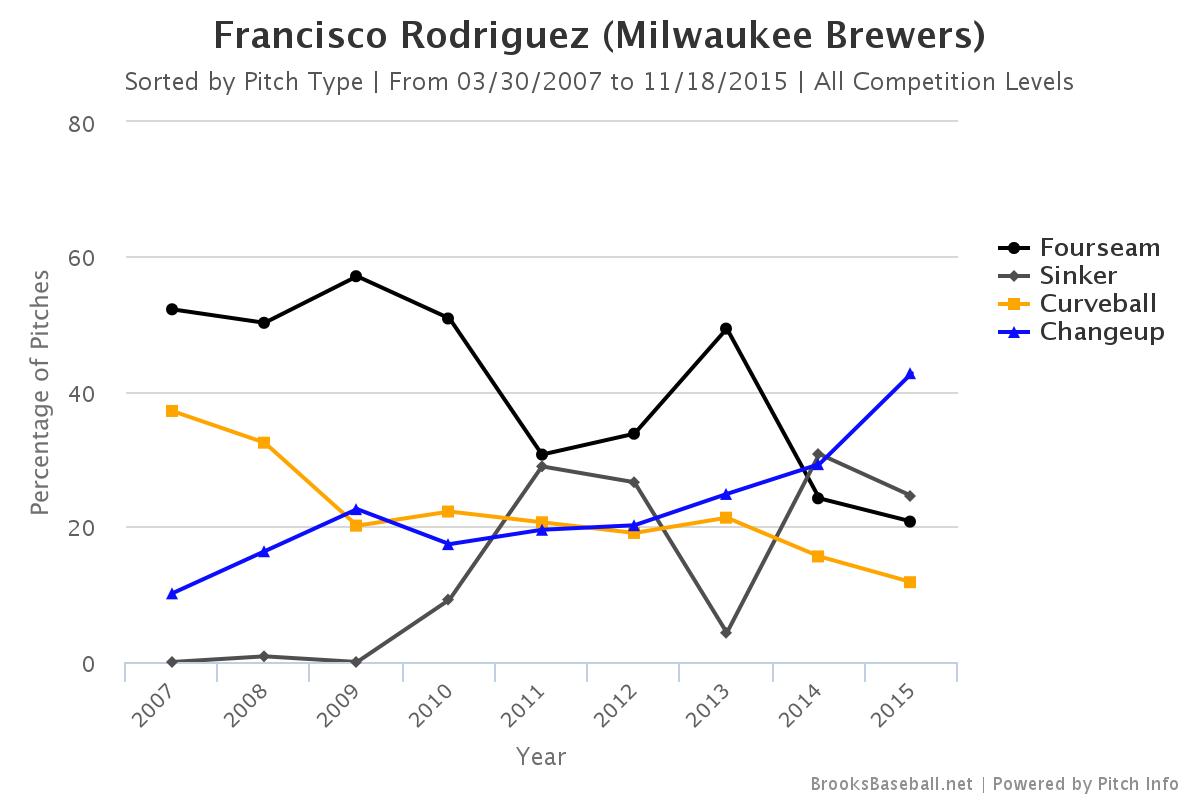 Rodriguez graded out as the eighth-best relief pitcher in NL-only formats, earning $19 last year. Closers are notoriously volatile, but barring injury, K-Rod should continue to thrive despite his age/mileage as a result of the transition from the launching pad that is Miller Park, to the more pitcher-friendly dimensions of Comerica Park. Rodriguez is the perfect option for fantasy owners with an affinity for advanced analytics, because despite numerous strong performances over the past few seasons, he continues to be available for a substantial discount on draft day.

Every other Tigers reliever

As was noted in Hill's free-agent capsule, his recent adjustments have convinced plenty around the industry that he's a legitimate back-end option—to the extent that there was a belief he would net a multi-year deal. Instead Hill settled on a one-year pact that came with the promise of a rotation spot.

From the A's perspective, this is a worthwhile gamble. Yes, Hill is a health risk (he hasn't topped 50 big-league innings since 2009), and yes, it's seldom a good idea to bank on a 35-year-old's mechanical epiphany. But sometimes these stories do result in legitimate, sustained improvement; just look at Marlon Byrd for a recent example. Whether Hill joins that club is to be determined. Yet provided he stays healthy (and there's no guarantee that he does), his fastball-curveball combination should allow him to find success in some role—perhaps the bullpen, if his stint in the rotation goes poorly.

And if Hill gets hurt and misses most of the season? Well, at least the deal is cheap and short. —R.J. Anderson

Weeeeeeeeee. Moving from Boston to Oakland is a beautiful thing, unless you actually have to do it in real life, which Hill presumably might. There was so much short-term success at the end of 2015 that it's worth grabbing Hill at the end of even shallow mixed leagues and seeing if the magic hasn't worn off. If not, discard him for the next one and move on. In deeper leagues, well, the same thing applies despite the waiver wire being far worse. We're allowed to have some fun, right? —Bret Sayre

Acquired 2B-R Javier Betancourt and a player to be named later from the Tigers in exchange for RHP Francisco Rodriguez. [11/18]

For information on Betancourt, please consult our Tigers' top 10 list.

Milwaukee might not be done dealing this offseason, but at this point in time, the most intriguing speculative option is Smith, their dynamic southpaw. The historical aversion to left-handed closers is important to note, but if we are looking purely at results over the past two seasons, Smith should get the first opportunity to slam the door in April. In addition to posting the lowest DRA (3.23) of his career, the 26-year-old former Royal averaged 12.9 strikeouts-per-nine (thanks in large part to his nasty slider) and trimmed his walk rate below four-per-nine (3.4 BB/9) over 76 relief appearances in 2015. Control will continue to be an issue, but it’s not an insurmountable obstacle that should keep him from getting a chance to close.

The appropriate hedge (if you’re into the whole handcuffing closers scene) is Jeffress, a right-hander who not only averages close to 97 mph on his heater, but also owns one of the best backstories of any reliever in the game. It wouldn’t be a surprise to see the Brewers bring in another veteran to compete for the job, but as it stands right now, we will likely be ushering in the era of “The Fresh Prince” come April. —George Bissell