During Game Four of the World Series, the Royals used their patented late-inning devil magic to come back and take a lead against the New York Mets. This turn of plot was old hat to the Royals, who outscored opponents 18-0 in the ninth inning (or later) of postseason games in 2015, though by their standards the twist came surprisingly early—during the eighth inning. That meant that the Royals’ closer Wade Davis was forced to approach the plate as a hitter for the first time since 2013. 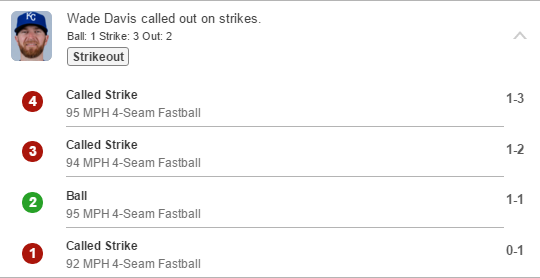 The result wasn’t good, but the reality was even more comical than what the box score shows:

Davis gleefully jogged back to the dugout having watched four mid-90s fastballs cross home plate against him. This of course, made me wonder…

What if the Mets had just walked him intentionally?

Seriously, what if? Davis would have to then spend some time on the basepaths, instead of in the dugout with his arm wrapped in a towel. It was 51 degrees when first pitch was thrown, so Davis would be standing out on the bases at 11:30 with temperatures several degrees lower. It might have messed with his pre-pitching routine if he was stranded to end the inning and he had to jog into the dugout or wait for his glove to be brought out by one of the Royals players.

In theory, walking Wade Davis isn’t necessarily the worst idea in the world. The Mets were already down two runs, already heavily disadvantaged against a pitcher who simply doesn't give up two runs. They would slightly increase the chances of going down three (or more), but perhaps throw off Davis' mindset and increase (however slightly) the chances that he has an uncharacteristic meltdown. We can easily measure how much risk it would be to walk Davis; we might also be able to identify whether there's a potential benefit.

The route the Mets took, the gifted strikeout of Davis, left the Royals with no runners on and two outs in the inning. In 2015 teams scored 0.1 runs per inning in those circumstances. The alternative, walking Davis would leave the Royals with a runner on first and one out, carried a run expectancy of 0.5 runs in 2015, meaning that the prospect of walking Davis would generate 0.4 more expected runs than striking him out.

While Baseball Prospectus’ run expectancy table is built on aggregate numbers across MLB each season, it’s worth noting that Davis was followed by the top of the Royals lineup, so it’s not as if the batters following Davis were easy outs.

Now that we know the bar that Davis would need to surpass, we can consider whether or not walking Davis would have actually helped the Mets. The next step was to pull some similar data to understand whether walking opposing relievers produces lackluster results in subsequent plate appearances. To do that the BP Stats team helped pull data on every relief pitcher plate appearance dating back to the 2005 season. In total there were 511 relief pitchers who threw both before and after a plate appearance where they reached base, making up the sample for this exercise. It’s worth noting that the average reliever in this sample was on base for just over seven pitches, but the number ranged from just one pitch to as many as 25.

In order to compare pitchers in both scenarios I took the average of their performances before and after the plate appearance in which they reached base. The denominator for most of these analyses is plate appearances because relievers often don’t work full innings.

Before their plate appearance, the relief pitchers in this study posted the following stats:

Overall, the pitchers in the study gave up an on base percentage-equivalent of .289, with strikeouts in 20 percent of plate appearances. After their plate appearances the numbers changed a fair amount:

The OBP-equivalent of opposing hitters went up nearly 30 points, and home runs per plate appearance increased one percentage point. Strikeouts also came down 10 percent. It's not an insignificant difference—except, of course, it is, because we don't know whether the variable we're considering (reaching base) was a factor at all. Quite likely pitchers are just worse in their second innings of relief, even when they're pitching well enough that their managers allow them to bat.

Sooooo, let's look at our control group: Pitchers who had a plate appearance where they did not reach base, as Wade Davis did, followed by another appearance on the mound. During the same timeframe there were over 2,700 relievers in our sample. Their before and after numbers, compared to our test group, look like so:

The numbers are similar. The effect of sitting out an inning, and possibly also having a plate appearance has a big effect; yay for the Mets! But the simple act of reaching base is of little to no value in general. Or, taken at face value, negative value (though that seems unlikely).

Now, as mentioned above: It was real cold. The average temperature at first pitch in all games we looked at was 77 degrees, more than 25 degrees warmer than New York on the night of Game Four. If we restrict our sample to games that started at 55 degrees or below (a sample that is tiny, but we're desperate here), the results are as follows:

Okay, the best remaining case for walking Davis: This type of analysis looks at the typical results of hundreds of events, stretching across nearly a dozen seasons. But Davis and the Royals weren't the collective average of 571 attempts; they were just one, and maybe that just once would have been the time it mattered. Maybe they were atypical. There's no way of knowing, but it's no less sensible than the Royals believing Alcides Escobar could win the game just by swinging at the first pitch.

Of course, that's not very sensible, either.

The outcome for the Mets might have been very different had they just let Wade Davis take first base. There’s really no logical reason to think that of course, but at that point in the World Series irrationality was about all the Mets had. They were desperate for something to matter. Walking Wade Davis would have been really odd, pretty cool, and certainly entertaining. It just probably wouldn’t have helped the Mets at all.

Special thanks to Rob McQuown and Matt Perez for data and calculation assistance.

You need to be logged in to comment. Login or Subscribe
mbichan
If Davis wants to go back to the dugout, there is no way to stop him. He would just keep walking around the bases until he either scores or is put out.
Reply to mbichan
brownsugar
Agree. I was thinking he could go ahead and make three feeble swings at the intentional balls. But I like your gamesmanship idea better.
Reply to brownsugar
BSLJeffLong
Yeah, I actually wrote a whole analysis about Davis waving through three pitches making this entire analysis moot, but we edited it out when we uncovered that whether or not the reliever actually makes it to first is largely irrelevant.

According to the data, the damage was done regardless of whether Davis watched 4 balls, whiffed at intentional balls, or watched fastballs sail across the middle of the plate.
Reply to BSLJeffLong
BSLJeffLong
That first "analysis" should be "sentence". But yeah.
Reply to BSLJeffLong
mbichan
But if you want to know whether the damage was really done, your control would need to be the group of pitchers who didn't have a plate appearance between innings. As you say, "quite likely pitchers are just worse in their second innings of relief."
Reply to mbichan
mattstupp
What if the Mets had used their second best reliever (Sean Gilmartin) instead of a verifiably shaky Clippard to start the 8th inning of Game 4? Would he have walked two batters that would come around to score?
Reply to mattstupp
wbrockhoff
Cyborgs don't have routines, they don't have feelings and they never never stop. Same outcome!
Reply to wbrockhoff
pizzacutter
This is brilliant, even in its non-finding.
Reply to pizzacutter
BSLJeffLong
Thanks Russell!
Reply to BSLJeffLong
ravenight
Good to know that it doesn't matter whether the pitcher gets on. Of course, you could argue that being put on base specifically to degrade his performance might have psychological effects on him - would he have tried to strike out to make sure he didn't get on base? Would he have "stolen" second to get thrown out? Would he have just taken the base like normal and then been angry about the idea that they did that?

In retrospect, of course, it was worth the shot since we know that he didn't give up 2 runs. In the moment, though, there would have to be a pretty strong effect to give up that extra runner. It seems obvious now that trying anything to get Davis off his rhythm would be desirable, but then again, would anyone have expected Familia to blow 3 saves? If he had shut the Royals down each time he came in, would the narrative have been that the Mets had the obviously, inevitably invincible closer (like he had been for half a season leading up to the World Series)?

I think it's either the right play all the time or none of the time (sounds like none of the time, based on this analysis). It was at least as likely that Davis would blow the save as it was that they'd end up needing him to in the first place.
Reply to ravenight
oldbopper
I never thought I would see an article on it, but, at that moment, my thought was that the Mets had to do something to attempt to throw Davis off his game and an intentional BB was right there in front of them. Davis is not just "average pitcher" and cannot be quantified as such. Davis and the Royals, as you mention, had alternatives as well but Collins should have tried it. Regarding Familia, he failed in Game 1 but then was the victim of bad managing. He should never have pitched in Game 3 then was placed in very tough spots in Games 4 and 5. 5 innings, 3 hits, 1 run hardly looks like the line of a pitcher with 3 blown saves.
Reply to oldbopper
smartishpace
I'm happy that the results of the research did not cause you or your editor to think "but...there is no article here." Entertaining. Great work!
Reply to smartishpace