This past season we heard a lot about a handful of teams that constructed their lineups with clear offensive philosophies in mind. The Royals were filled top-to-bottom with hitters who boasted premium contact skills. The Blue Jays loaded their lineup with right-handed boppers. The Cubs and Astros were littered with players with serious swing-and-miss but massive power. Those four teams all shined in the spotlight on their road to the playoffs. However, there was another lineup in baseball this year that flew under the radar with a more subtle uniformity.

The Orioles offense didn’t capture nearly as much attention, largely because their productivity dropped off after losing Nelson Cruz and Nick Markakis to free agency last offseason. Cruz had a monster 2014 campaign that simply couldn’t be replaced and Markakis’ consistent league-average production was sorely missed. The revolving door in the corner outfield spots—which included cameos by Nolan Reimold, Travis Snider, Steve Pearce, Alejandro De Aza, Delmon Young, David Lough and Gerardo Parra—simply didn’t cut it. The Orioles went from the fourth-best offense in baseball by TAv in 2014 to 25th by the same metric in 2015.

The 2014 Orioles weren’t shy to swing the bat, ranking sixth in baseball in swing rate with a particular affinity for attacking when the count was in their favor. They just edged out the White Sox in 2014 for the highest swing rate when ahead in the count and ranked 10th on first-pitch swing rate. Unsurprisingly, they ranked seventh-to-last in walk rate, but they made up for that by hitting the ball with authority when they did make contact; they trailed only the Rockies in isolated power.

Matt Trueblood has written on these pages before about the league’s shift toward hitters who are more aggressive early in counts. The first pitches of plate appearances are less likely to be balls than they once were, and the cost of falling behind early in the count is only increasing. Couple that with the league collectively performing worse in three-ball counts and two-strike counts and the result is that hitters are basically just as well off swinging at the first pitch as they are taking it.

If there’s one thing that the 2015 Orioles took to heart it’s that they weren’t going to work a deep count just for the sake of it. They hacked and they hacked early. Their swing rate on the first pitch increased from 27.6 percent to 32.3 percent, the biggest jump among teams from 2014 to 2015. Only the Astros swung at more first pitches this past season. Baltimore’s MLB-highest swing rate (49.2 percent) when ahead in the count in 2014 increased to 51.1 percent in 2015.

The difference between the Orioles and second-place Phillies was about the same as the difference between the Phillies and Cardinals, who were the 13th most aggressive team ahead in the count. The 2015 Orioles barely edged out the 2009 Giants for the highest rate since 2008 (as far back as Baseball Savant's PITCHf/x search tool goes). Of course, the league as a whole has become more aggressive in hitters counts in recent years, with the league average rate rising from 43.8 percent in 2008 to 45.8 percent in 2015. Using z-scores, I was able to find out how extremely this year’s Orioles team deviated from the league average compared to past teams.

So the Orioles' aggressiveness in favorable counts isn’t the most extreme case in recent memory after considering the league environment, but they were still over two standard deviations higher than the league average. When such an outlier exists, it’s worth examining how they got there. Let’s look at the Orioles hitters who received at least 100 plate appearances this year and where they stacked up against the rest of the league.

Schoop, Paredes, Young and Jones were the big drivers of Baltimore’s swing-happy lineup; Schoop and Paredes were the two most aggressive hitters in baseball when the count was in their favor, while Young and Jones rounded out the top seven among hitters with at least 100 plate appearances.

The Orioles picked up Parra at the trade deadline from the Diamondbacks, where he had sported an above-average 48.2 percent swing rate ahead in the count over the course of 351 plate appearances. His aggressiveness ticked up upon his arrival in Baltimore but his overall production slid down the stretch.

Nelson Cruz and Nick Markakis had both been below-league average when it came to swinging when the count was in their favor, so having Paredes carve out a healthy amount of at bats at DH early in the season after barely playing in 2014 inflated the team’s overall rate. Paredes and Schoop were more aggressive than they had been in previous years but were counteracted by guys like Machado, Joseph and Wieters actually being more passive than they had been in 2014. The personnel change, rather than a collective effort by the players to become more aggressive with the count in their favor, appears to be the cause for the increase.

Again, we see Baltimore’s quartet of hackers at the top of the leaderboard, with Paredes, Schoop, Young and Jones all ranking among the top 15 hitters in first-pitch swing percentage. Chris Davis also sneaks his way into the top 10 percent of hitters. Really, the only thing keeping the Orioles from being the most aggressive team in baseball on the first pitch last season was J.J. Hardy, who actually became more aggressive this season. His 4.2 percent first-pitch swing rate ranked dead last in baseball in 2014.

Markakis swung at the first pitch a frequent 30 percent of the time during his final season in Baltimore, while Cruz’s 17 percent rate was well below average. Unlike the more aggressive approach ahead in the count, it appears that Baltimore’s five-percentage-point increase in first-pitch swing rate was more than just having a different cast of players. Take a look at the change in first-pitch swing percentage by the players who suited up for both the 2014 and 2015 Orioles.

Here we have a group of players that—for the most part—jumped on the first pitch more this season that they had in the past. Couple that with the group’s tendency to jump on pitches ahead in the count and it becomes clear that the Orioles weren’t a team that liked to leave the bat on their shoulders.

On the other hand, it’s true that different hitters excel with different approaches, so maybe it shouldn’t come as too big of a shock to see Machado as one of the few players trending in a different direction from his teammates. After all, prior to this season he had a slight problem with being too aggressive, particularly on pitches out of the strike zone. Much of his improvements in 2015 were due to refined selectivity at the plate, as he laid off more pitches out of the strike zone and showed an ability to drive the ball on pitches up in the zone. Machado wasn’t being passive in these counts as much as he was being extremely selective. 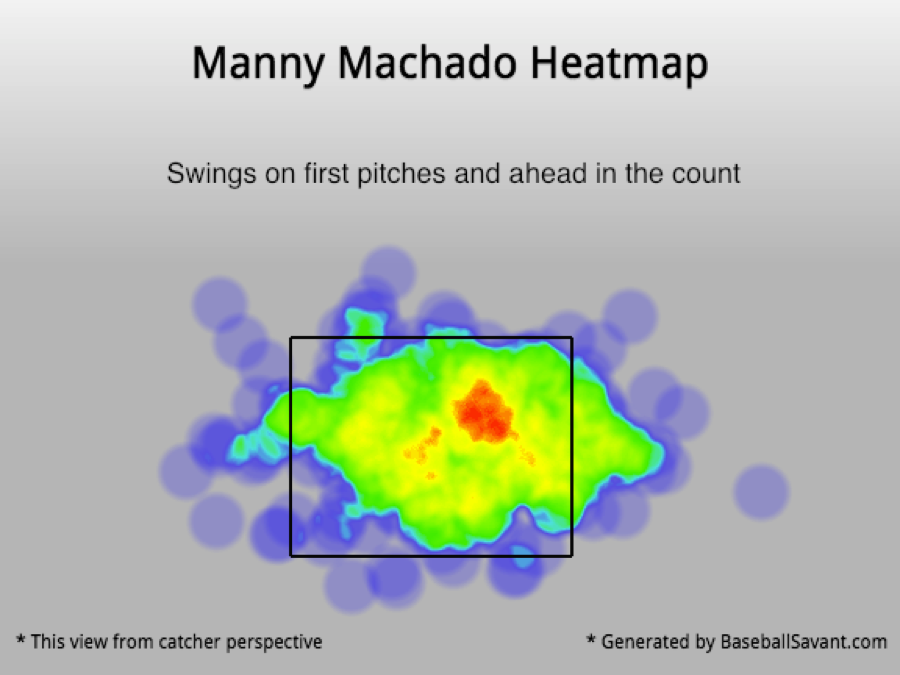 But for most of the other hitters in the 2015 Orioles lineup, the motto was clear: swing early and swing when the pitcher is backed into a spot where he has to give you something good to hit. The results may not have turned out the way Baltimore would have liked; there were some bright spots like Machado’s breakout, Davis’ monster season and Schoop rebounding offensively after a putrid rookie season at the plate, but it was largely a disappointing season.

Things could get even grimmer in Baltimore with Chris Davis and Matt Wieters set to hit free agency. Davis does fit the mold of hitter that the team likes, so maybe that gives Dan Duquette and company extra incentive to pony up for slugging first baseman. If not, replacing the value Davis brought to the lineup would be a tall task for a team already looking to rebound offensively in 2016. If they do choose to look elsewhere, at least we should have a good idea of the type of hitter they’ll go after.