In a trade between this and last winter's busiest general managers, Jerry Dipoto takes Benoit and his $7.5 million salary off A.J. Preller's hands in exchange for two prospects.

Although Benoit will celebrate his 39th birthday come July, he remains a highly effective late-inning reliever. He uses three pitches to do his work: a mid-90s fastball, trapdoor splitter, and slider that he used against righties more often last season than usual. That combination resulted in a higher percentage of whiffs in 2015 than all but six pitchers who threw 1,000-plus pitches. There are always going to be concerns about Benoit's health—even though he seemed fine following 2014's early-season shutdown due to shoulder inflammation—but if he stays healthy, he should take over in the eighth.

Consider that a positive development for the Mariners, whose bullpen finished near the bottom in staff DRA. Two of the biggest offenders (Fernando Rodney and Danny Farquhar) are elsewhere, leaving behind an odd collection that includes Carson Smith, Tom Wilhelmsen, Charlie Furbush, and numerous untested middle relievers. Dipoto will presumably dip into the market once more, at least for an interesting non-roster invitee, but on paper this has the makings of an improved unit. —R.J. Anderson

The 38-year-old veteran setup man, whose fantasy upside was capped by the presence of Craig Kimbrel in San Diego last year, will experience a substantial increase in fantasy appeal with the move to Seattle, where he is the favorite to open the 2016 campaign as the Mariners closer.

Despite his advanced age, Benoit has shown no signs of slowing down. Since 2010, he’s pitched for a trio of organizations (Tampa Bay, Detroit, and San Diego) with almost no fluctuation in the quantity and quality of his performance. Over the past five years, he ranks ninth in both innings pitched (379) and ERA (2.35) while racking up over 10 strikeouts per nine innings. Meanwhile, his yearly average velocities on his four-seam fastball, slider, and splitter have been virtually carbon copies of the previous seasons during that span. 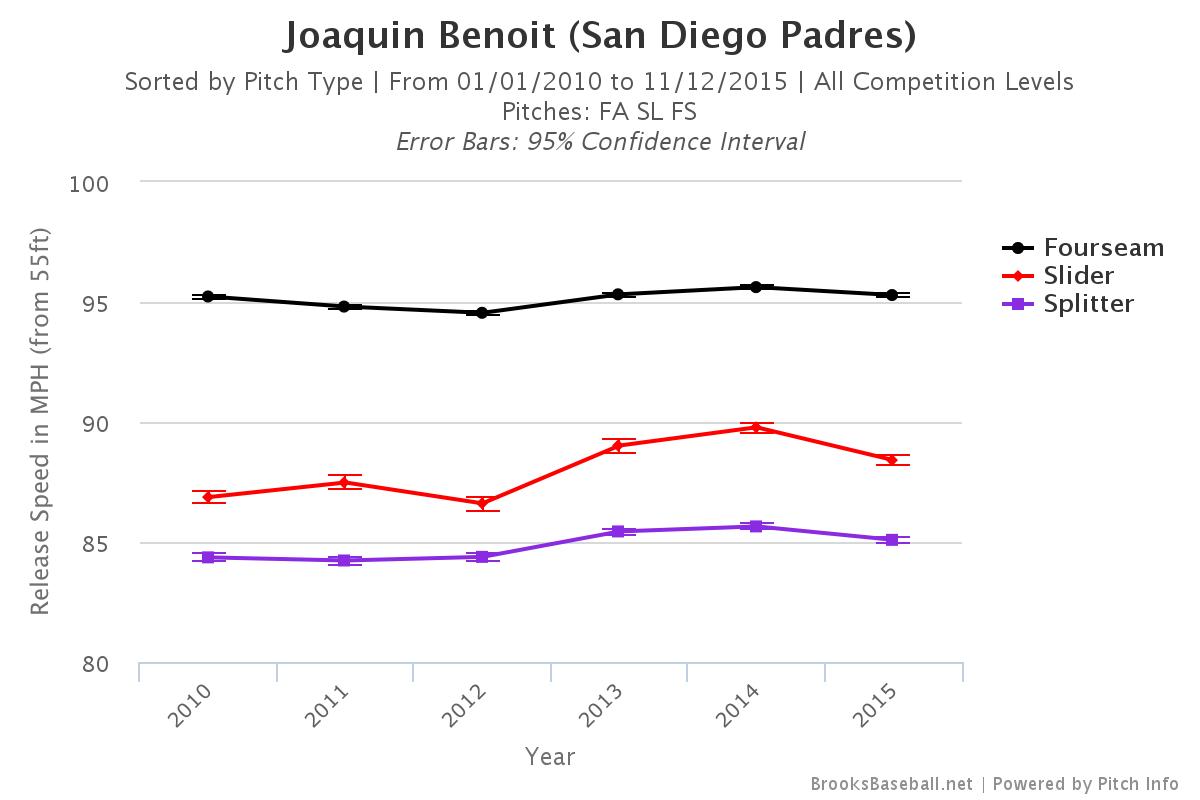 In two seasons with the Padres, Benoit was one of only seven pitchers who recorded a top-15 Deserved Run Average (DRA) in consecutive campaigns, posting DRAs of 2.22 and 2.51, respectively. The other six were Dellin Betances, Wade Davis, Aroldis Chapman, Andrew Miller, Clayton Kershaw, and Jake Arrieta. It’s also worth noting that Benoit owned the lowest BABIP (.191) of any reliever in the game over the past two years.

Benoit has just 50 career saves (24 of which came in a single season with Detroit back in 2013), but he’s clearly an upgrade for the Mariners in the ninth inning over Tom Wilhelmsen, Carson Smith, and the long-since-jettisoned Fernando Rodney, who combined to convert just 42 saves in 56 opportunities (75 percent) in 2015. —George Bissell

De Los Santos, the "big name" the Padres acquire in return for Benoit, was one of the few Mariners pitching prospects who offered any kind of upside. He still has some projection left in his frame, and he's touched 96 mph while sitting more comfortably in the 90-92 range. His best offspeed pitch is a potentially above-average change that deceives hitters thanks to his consistent arm speed and its fade. He'll also mix in a fringe-average slider with two-plane movement, though it can get slurvy and he tips it by lowering his arm slot. If De Los Santos' velocity comes, he's a potential mid-rotation starter, but back-end option and reliever are just as likely—and, with so much development required to reach those levels, so is organizational fodder.

Ward has played all over the field since being drafted out of Georgia in 2014. It's a good thing, too, as he'd be a non-prospect without his versatility. Neither his hit nor his power tool projects as average or better, but he makes pitchers work and has shown he can handle second and third base, as well as each outfield position. Additionally, his above-average speed gives him a chance to steal a base or 10 a year. Even if everything goes right in his development, Ward is strictly a bench bat—albeit one who could become a 25th man for the Padres in the next couple of years. —Christopher Crawford

You need to be logged in to comment. Login or Subscribe
wilymo
if a trapdoor splitter is anything like a trapdoor spider the safeco infield should be a lively place next season. or a deadly place
Reply to wilymo
oldbopper
The article does not mention that Benoit also throws a changeup or has he abandoned that after offering one up to Big Papi in the 2013 ALCS, chuckle, chuckle.
Reply to oldbopper
bhalpern
It appears brooksbaseball categorizes the change as a splitter. An article on fangraphs from 2014 included this description of the pitch: "Benoit throws a FOSH, or a splitter grip where the ball rolls off the weaker fingers a little like a circle change."
Reply to bhalpern
GeorgeBissell
That's a good point. You're exactly right that however you want to classify it, the pitch is a splitter essentially serving the same purpose as a changeup. It doesn't generate the same type of vertical movement as most changeups, which might explain why PITCHf/x classifies it the way it does.

With that being said, very few relievers throw a split/change. Only Koji Uehara and Brandon Gomes recorded more average vertical movement on the pitch last year: http://www.baseballprospectus.com/pitchfx/leaderboards/index.php?hand=&reportType=pfx&prp=RP&month=&year=2015&pitch=FS&ds=vmov&lim=200
Reply to GeorgeBissell