The offseason is a time for contemplation, for signing free agents, for longing for the simple pleasures of watching young dudes who will never see the field come April run around on one in March. For me, it has also emerged as a time to discover baseball cards. I never collected baseball cards as a child. My father, who didn’t have a son until I was 12, was happy to have me watch Star Wars and Star Trek and all sorts of other things that rendered me undatable for a while, but he was never a baseball card aficionado, so they sort of passed me by. But baseball cards are snapshots, freezing players in time even as they look ahead to hypothetical seasons. As much as they look back on the statistics and accomplishments of prior campaigns, they serve as a first draft of history: They include reporting, punditry, forecasting, personal biography, data crunching, photography—all the tools in a journalist's toolbox, crammed into tiny one- or two-sentence capsules. But unlike beat writers’ columns or the roving words of internet writers, destined to be largely forgotten by the time the next season rolls around, these first drafts are permanent.

Sometimes, they mark brief stints in unexpected places, like when you remember Yoenis Cespedes was on the Red Sox for a minute. Sometimes, they’re a reminder a player existed at all, or that Rickie Weeks really did play baseball in 2015—I have the card to prove it! They do their best to get it right, but often they get it wildly, hilariously, tragically wrong. Here is brief exploration of some of the textual oddities in my admittedly Mariners leaning baseball card collection. I am very sorry. 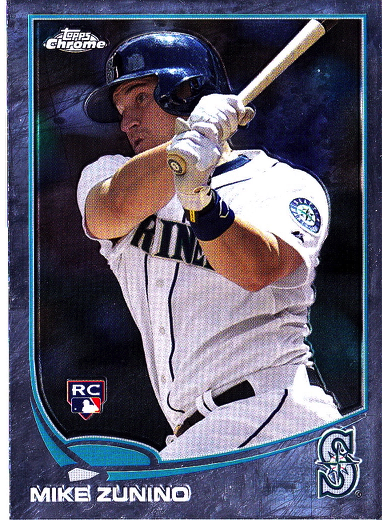 Mike’s 2013 card starts with a Career Chase line that seems designed to connect the modern fan to the confusing world of advanced statistics: “With 0 home runs, Zunino is 762 away from Barry Bonds’ all-time record of 762.” Math can be tricky. It goes on: “Mike says he never dreamed he’d be in a Major League uniform one year after being drafted [us either], but an impressive showing in the spring [eh] and some Mariners injuries got him there in 2013.” Much like Zunino to the majors, too soon, Topps. Too. Soon. 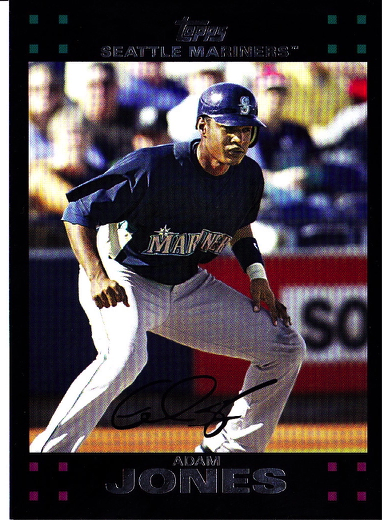 "Manager John McLaren says flatly of Adam, “He’s got a chance to be a really great player.”

Maybe McLaren knew. Maybe he knew that Adam Jones would be worth 27.8 WARP in his time in Baltimore. Maybe he knew that the Mariners outfield would come to resemble an industrial-grade zombie apocalypse tire fire over the next eight years. Maybe he knew that Bill Bavasi would lose his job, and the Mariners would see managers and general managers come and go, and playoff dreams fail to materialize. Maybe he knew all of that but also remembered the old adage that if you don’t have anything nice to say, don’t say anything at all. So instead, he flatly said Adam Jones has a chance to be a really great player, stared into the middle distance for a while, and then spit 10 times in a row. Maybe. 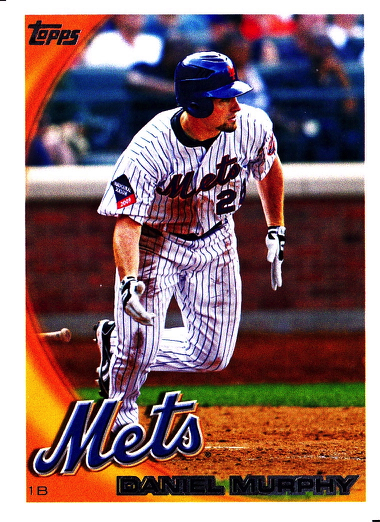 "The Mets couldn’t keep many players healthy in 2009, but Daniel was a constant, playing in more games than any other. He also paced the team in home runs, and was second in RBI and doubles." 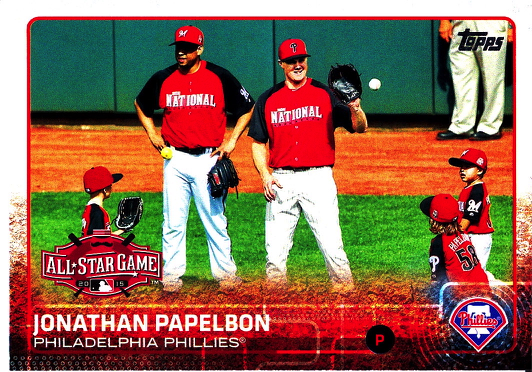 Marcel Proust once wrote, “Words do not change their meanings so drastically in the course of centuries as, in our minds, names do in the course of a year or two.” Marcel Proust probably didn’t write the text of Jonathan Papelbon’s 2015 Update Series card, but considering it starts “Closers, by nature, are a volatile lot” it could well pass for the opening line of In Search of Lost Time. Which is probably how the Nationals feel about Papelbon’s contract. 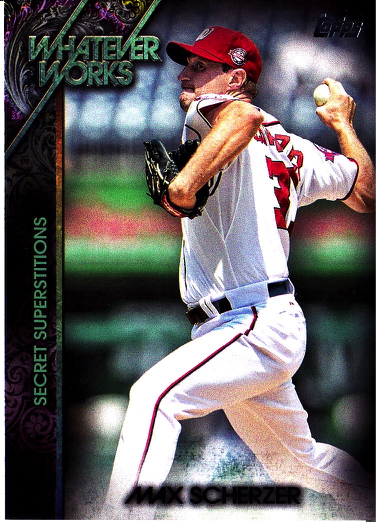 "Max says he’s superstitious about his superstitions, preferring not to share most of them publicly out of fear they’d stop working. Two he will reveal: Scherzer eats a huge roast beef sandwich before every start, and he wears his shorts backwards."

I have a lot of questions about the internal logic structure of Max’s superstitions. Are the roast beef sandwiches and bizarre sartorial choices somehow immune from failed efficacy, and if so, how so? Are they lies planted to throw nosy Topps interviewers off the scent? Is Max Scherzer an unreliable narrator? Do those more efficacious superstitions involve sacrifices of their own, and are those involved with said sacrifices also eating a roast beef sandwich and wearing backward shorts? And are those shorts really boxer briefs? Will they no longer work because he’ll be restrained by the laws of gods and men if they’re discovered? ARE YOUR EYES EVEN DIFFERENT COLORS? 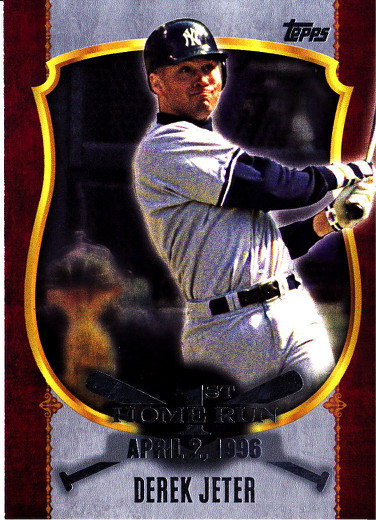 Despite appearing after the Captain’s retirement, this card refuses to address the future first ballot Hall of Famer in the hushed, reverent tones appropriate to his station. The 2016 Update will no doubt rectify this error and read: “Homerle22 in hi2 15 Yankee2 game2 of 1995, Derek quickly era2ed the zero the following 2ea2on by going deep on Opening Day in Cleveland. Batting ninth in the order—a po2ition that would be upgraded as the 2ea2on wore on (pre2umably out of re2pect)—Jeter lined a leadoff home run to left in the fifth inning. He would go on to win the 1996 AL Rookie of the Year Award. #re2pect” 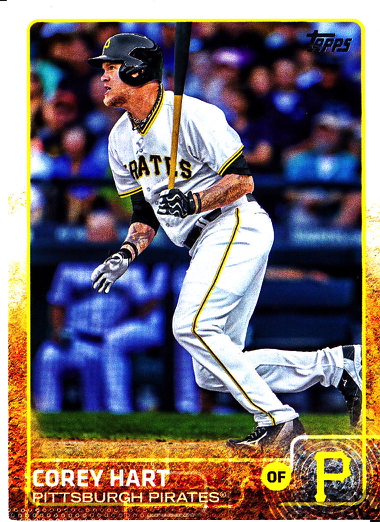 "Corey is a two-time NL All-Star who, just three years ago, was a 30-home run force."

In April 2014, I made a terrifically bad joke about how I wear my sunglasses at night so I can avoid looking at the scars on my surgically reconstructed knee. In September 2014, Corey Hart got DFA’ed (this part is not a joke). In 2015, Topps made us consider our own mortality, and the crushing flow of time. Baseball, man. It comes at you fast. 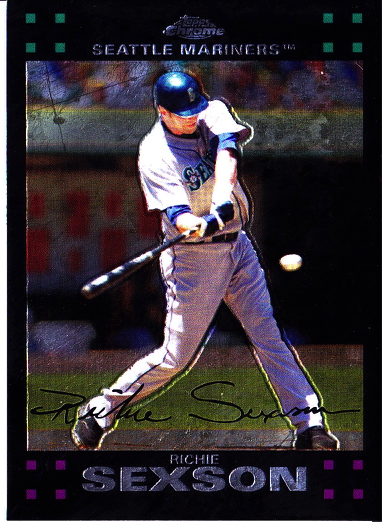 "Hitting coach Jeff Pentland says that Richie set a team record with five grand slams in 2006 because he’s ruthlessly composed: 'It’s like a shark. He just eats you and doesn’t feel sorry for you.'”

Jeff Pentland compared Sexson to a shark that doesn’t care about your feelings as it is eating you. Richie Sexson and the mid-2000s Mariners teams had a lot in common. 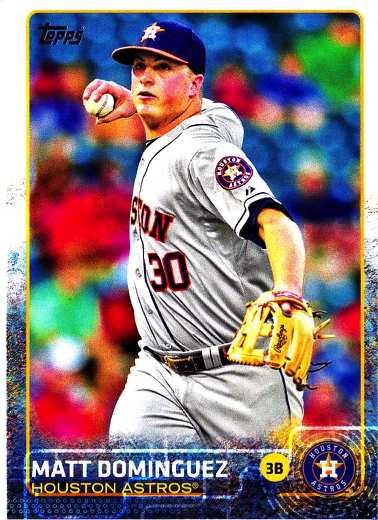 "The son of a newspaper copy editor for The Los Angeles Times, Matt and his brother dreaded bringing their papers to their father for review. 'We knew it was going to add two hours to our homework,' he said. Discovering grounders to be more fun than grammar, Dominguez molded himself into a top-notch defender at third base with 20-homer power."

Thanksgiving will likely be awkward when Matt’s father hands him a redlined scouting report from his new club and says, “It wasn’t the grammar, Matt. It wasn’t the grammar. It was the baseball.” Leaving Matt to quietly reply, “Those aren’t typos, those are just my stats.” 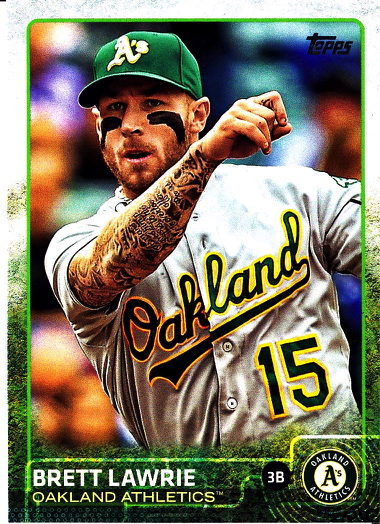 "Brett’s trade from Toronto to the Athletics became a social media phenomenon when video of a 6-year-old Blue Jays fan crying about the loss of her favorite player went viral."

The 6-year-old in question retweeted MLB’s footage of her crying, landing her in MLB Advanced Media jail, where she was be forced to re-watch 30-second highlight GIFs of home runs that showed only the batter’s swing and him crossing home plate, leaving her to wonder if the ball ever really cleared the fence at all. 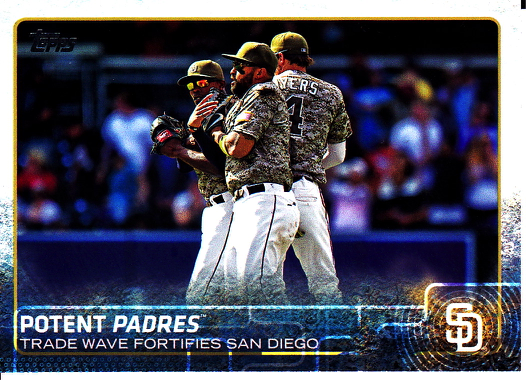 The front of this update card touts “Trade Wave Fortifies San Diego.” An update to the update: Trade waves apparently only move in one direction, and routinely trap franchises in the undertow.

You need to be logged in to comment. Login or Subscribe
garciamckinley
The most awkward thing about all of these is that they each insist on using the player's first name in the description.
Reply to garciamckinley
fawcettb
Style bible. All publications have one. Except, as far as I can see, BP.

This was BP's frivolous day, right? Let's not have another one soon, even if it is the off-season. Between this article and Quinton's 2nd advertorial for whatever business school he just graduated from, it has me reconsidering why I pay for this site.
Reply to fawcettb
buddha
How many reconsiderations does it take for you to actually stop? Just like licking the Tootsie Roll lollipop, you've got to be just about there, right? I'm looking forward to your going-away article...methinks, like the rest of what you write, it'll get down-voted into oblivion.
Reply to buddha
BrewersTT
The Corey Hart entry made me laugh, but in a way it's true. Sports lets us see a trial run of mortality, over and over, inescapable.

The Scherzer entry is funny too. One imagines Scherzer chuckling to himself later, "I told them roast beef, heh heh heh".
Reply to BrewersTT
jsdspud
This was a fun article, I enjoyed it.
Reply to jsdspud
bgawlowski14
The Corey Hart card is clearly a photoshop job. He's wearing a home Pirates jersey in Safeco Field, where the Mariners can also be seen wearing white.
Reply to bgawlowski14
BeplerP
OK, I confess I would never have labelled Max Scherzer as an unreliable narrator, but then Wayne Booth never made it to the Midwest League, did he?
Reply to BeplerP
km9000
I find it hard to believe that a girl growing up on Star Trek and Star Wars would ever result in her being undateable.
Reply to km9000