As practically every baseball writer spends the week wondering what baseball can learn from the Royals, the theme that emerges is of an organization whose moves confounded expectations every step of the past three years. Which raises the more interesting question: What will Kansas City do to puzzle us—and stay competitive—next?

Consider: The Royals' remarkable success in the seventh, eighth and ninth innings is not just about how dominant the Herrera/Davis/Holland, and later Herrera/Madson/Davis, trios were, but about where those elite relief pitchers came from—reclamation projects, late-round picks, converted disappointing starters, TJ recoveries. The Royals will certainly be without Greg Holland next year (whether they re-sign him or not, he'll be downed by Tommy John surgery), and likely without Ryan Madson, a free agent. Franklin Morales is also a free agent, and Blanton and Brandon Finnegan—who both provided quality innings earlier in the year—had already been excised by October. The bullpen will have to be reinforced. If recent history is any indication, the club's next stud reliever isn’t searching for a new home this winter, but rather is hibernating on the roster already. Given their uncanny ability to turn former starters Wade Davis and Luke Hochevar into, respectively, the best reliever in the game and Luke Hochevar, their next potential unconventional experiment moving forward should be left-hander Danny Duffy.

Why Duffy?
The 26-year-old southpaw posted a lackluster 4.84 Deserved Run Average (DRA), which ranked 116th out of 141 pitchers who eclipsed the 100-inning plateau, over 24 starts this season. The rest of his rate stats—which include a 1.39 WHIP, subpar strikeout (6.7 K/9) and walk (3.5 BB/9) rates—and the lack of a third pitch to complement his four-seam fastball and slider (which accounted for nearly three quarters of his pitches), provide little optimism that Duffy remains a breakout starting-pitching candidate going forward. He also hasn't shown the ability to hold up under a starter's workload, missing significant time with elbow or shoulder injuries each of the past four years.

For the second consecutive season, Duffy was bumped from the Royals rotation for October. This year, it happened in September, and over the season's final two weeks, starting Sept. 20th against Detroit, Duffy was extremely effective out of the bullpen.

In six relief appearances, he fired 8 1/3 scoreless innings while allowing just four hits, striking out 12 and issuing just a pair of free passes. He followed up the surprising finish to the season with six postseason appearances in which he allowed four runs on seven hits (a .417 BABIP didn’t help matters), while striking out nine and walking nobody. 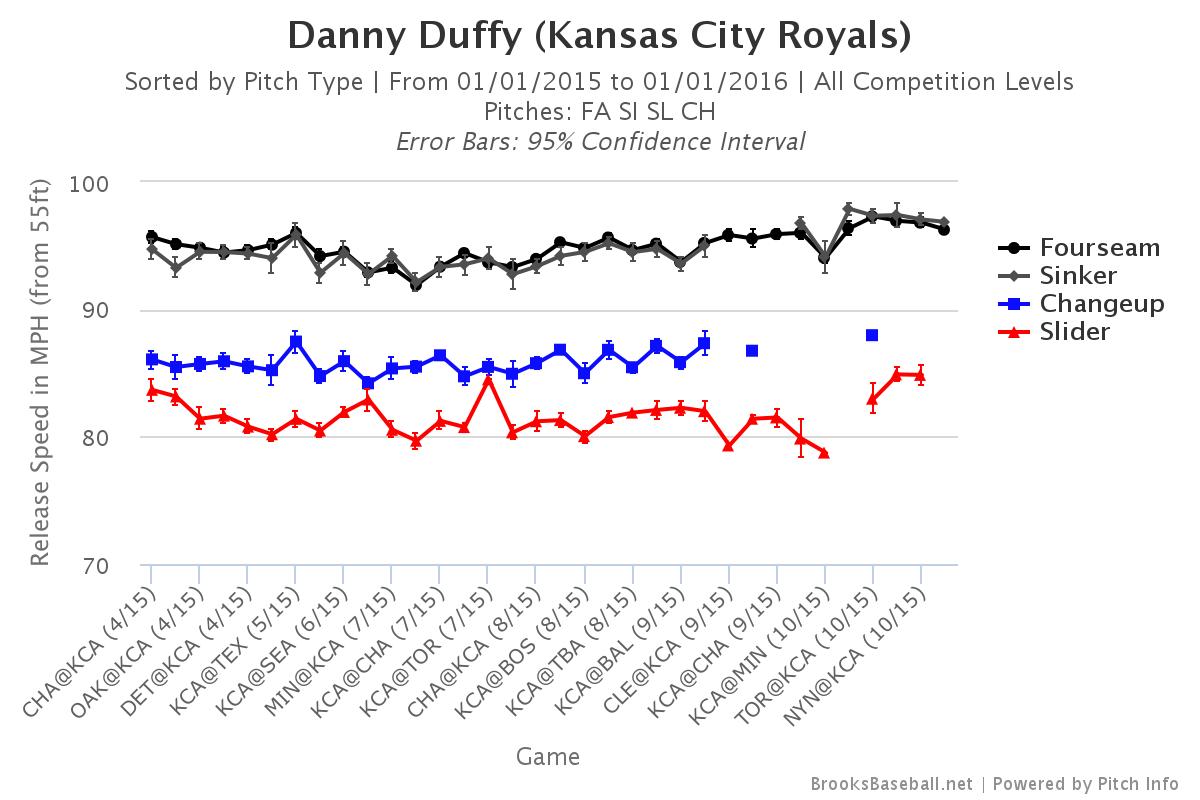 As you can see from the chart above, courtesy Brooks Baseball, not only did Duffy’s average velocity significantly increase across his entire repertoire as a reliever, but he also generated more swings and misses and changed the way he attacked opposing hitters. Shorter stints in relief enabled him to focus primarily on utilizing his prime offerings (fastball and slider) while only occasionally being forced to mix in a sinker or changeup.

According to the our PITCHf/x leaderboards, Duffy’s average four-seam fastball velocity as a starter ranked just above that of Clayton Kershaw (94.3 mph), making him one of the 10 hardest-throwing southpaw starters in the game. Of course, his results didn't match. Comparing Duffy’s whiff-per-swing rates against the pitch-type benchmarks established by Dan Rozenson from the 2014 regular season, the only pitch which grades out with an above league-average rate is his sinker, which has the benefit of selective usage. The rest of Duffy’s arsenal simply doesn’t generate enough swings and misses (or generate enough groundballs or weak contact) to survive multiple times though an opposing lineup.

The proverbial light-switch was flipped once Duffy transitioned to the bullpen. His velocity spiked, and suddenly became much more difficult to hit. He generated whiff-per-swing rates well above the league-averages. His control markedly improved. Ultimately, the premium velocity as a reliever would not only lead to an increase in Duffy’s strikeout potential long-term, but would also enable him to get away with more mistakes than he would with diminished velocity as a starter.

The velocity bump is significant to note: Very few left-handed relievers can crank it up to that type of speed consistently, even in shorter stints. Among pitchers who fired at least 200 heaters in 2015 and weren't Aroldis Chapman, the only southpaw relievers to eclipse 96 mph in average velocity this past season were Enny Romero and Joshua Osich. Only a pair of sinkerballers, Texas’ Jake Diekman and Zach Britton threw harder than 95 mph. To put it all in perspective, the average fastball velocity among left-handed relievers in 2014, according to Rozenson’s research, was 93.4 mph.

Converting Duffy to the bullpen doesn’t just make him a typical garden-variety LOOGY, it makes him one of the hardest-throwing lefty relievers ever. Small sample size caveat obviously applies here, but the early returns on the Duffy experiment ought to make the Royals think as they head into the offseason.

With Johnny Cueto, Young and Jeremy Guthrie (whose option was declined almost as soon as the parade ended) all hitting free agency this offseason, the Royals have Yordano Ventura, Edison Volquez, and Kris Medlen as the only major-league starters left in the organization. (Jason Vargas will miss most of the year recovering from surgery.) While even back-end starter-type Duffy would fill an obvious need in the rotation, he might solve more of their issues in the bullpen.

The only relievers left under contract heading into next season (who made at least 10 appearances this past year) are Davis, Hochevar and Herrera. Unless the Royals find a way to retain their other impending non-Holland free agents (Madson or Morales), they will need to find a way to replace the 183 appearances that trio made during the regular season. Morales' departure would also leave the Royals without a left-hander for Ned Yost to turn to out of the pen.

Fortunately for Kansas City, this year's free agent market is extremely deep for potential starting pitching acquisitions, with plenty of candidates for an organization that has been comfortable bidding and relying on mid- or third-tier rotation options like Volquez, Medlen, Young and Vargas. On the other hand, the reliever market is barren this winter, and the Royals haven't tended to shop at premium retailers for relief, anyway.

Duffy’s career appears to be at a crossroads. Once viewed as a potential no. 2 starter, issues of durability and, at times, effectiveness have kept him from making the leap to Postseason Starter. It might be time to see whether he can be the reinforcement needed to keep KC's strength a strength next year. The one thing we know for sure is that the Royals won't be afraid to make a bold decision.

You need to be logged in to comment. Login or Subscribe
oldbopper
I think the premise here is very compelling. In today's game shut down bullpens are absolutely the key to game management. With the miraculous transformations of Wade Davis and Zach Britton from stiffs to superstars it makes sense to make the change before the career craters completely. Duffy's repetoire of explosive heat seems to fit the template of the failed starter who resurfaces as a lock down reliever.
Reply to oldbopper