Chris Sale made the transition from the bullpen to the rotation in 2012, throwing 192 innings and posting the ninth-best DRA of any qualifying starter that season. He did so while leaning primarily on his fastball(s) and slider, throwing his four-seamer, sinker, or slider on 85 percent of his pitches. Compounding this simple pitch selection is the fact that there’s less than four inches of horizontal movement separating his four-seamer and sinker. Sale’s pitches had two pretty distinct looks to opposing hitters.

Since then he has gradually worked an improved changeup into his repertoire with increased frequency. It's now clear that the changeup has become not just a third offering but an excellent third offering, even replacing his slider as his primary secondary.

Originally Sale used his changeup as a tool exclusive to opposite-handed hitters. Indeed, he threw exactly three changeups to lefties in 2012. (It was 20 percent of his plan against righties, his fourth-most common pitch.) Since then, it has become the second-most favored offering against righties, but has also surpassed his sinker for third place against lefties: 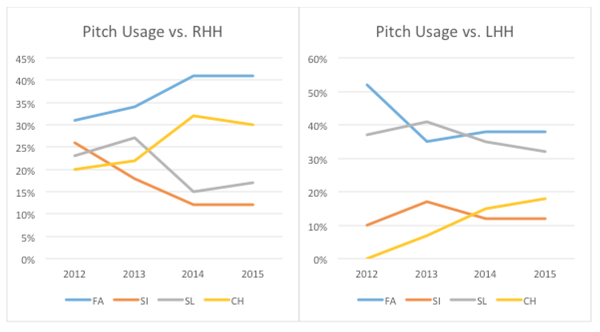 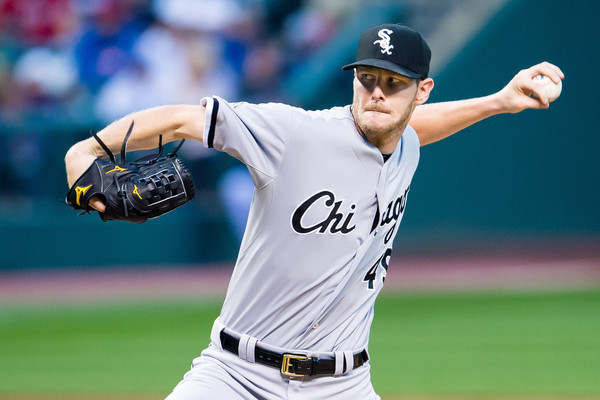 Originally, the change was weak, but a necessary evil for him to battle the right-handed hitters with whom opposing managers stuffed lineups against him. The change was necessary to complement the backdoor sliders and high fastballs that Sale would throw, but he was extremely hesitant to use it against lefties. It'd be easy to overlook this one limitation—he was a regular Cy Young contender, after all. (Clayton Kershaw barely throws a changeup, either. It can work.)

But, interestingly, Sale’s changeup wasn’t always an afterthought. Back in 2012, White Sox’ director of amateur scouting Doug Laumann said the changeup was Sale’s “best pitch when we saw him as an amateur.” (He didn't throw his slider in college.) Since then, the change has been the test subject for years of tinkering. During that 2012 season Sale worked extensively with pitching coach Don Cooper and bullpen coach Juan Nieves to fine-tune it. He knew the changeup was important to his future: “It’s something I’ve been trying to build on and get better. I want to have a third pitch to throw to help me get deeper in games,” he said at the time.

How has the change helped Sale? Well, it’s given him a different look to keep hitters on their toes, and make him more dangerous the second and third times through the lineup. Sale noted this impact following a start against the Rangers in 2013:

“Yeah, it felt good, especially to lefties,” said Sale of the pitch, which helped him limit the Rangers to one Geovany Soto solo homer over four innings and 50 pitches, while he fanned five.

“Hector told me before the game that we were going to throw a lot more changeups,” Sale added. “He said that these guys have seen your breaking ball and haven't been quite on your changeup and haven't seen it as much.”

Of course, the pitch doesn't exist in a vacuum, and Sale's changeup has not just produced positive effects on its own—such as the 40 percent whiff/swing rate, the eighth-highest in baseball; nobody above him on the list threw the changeup as often—but, in its refined 2015 form, helped enhance his other offerings. Sale’s unique delivery disguises his pitches well, giving the hitter precious little advance notice of what pitch it is hurtling toward home plate. What does a changeup like this one

Sale uses his change up to change eye levels by working down and toward his arm-side, followed up by high, glove-side fastballs. You can see below how Sale uses his changeup (left) and fastball (right) to move the ball up and down in the zone, as well as side-to-side. 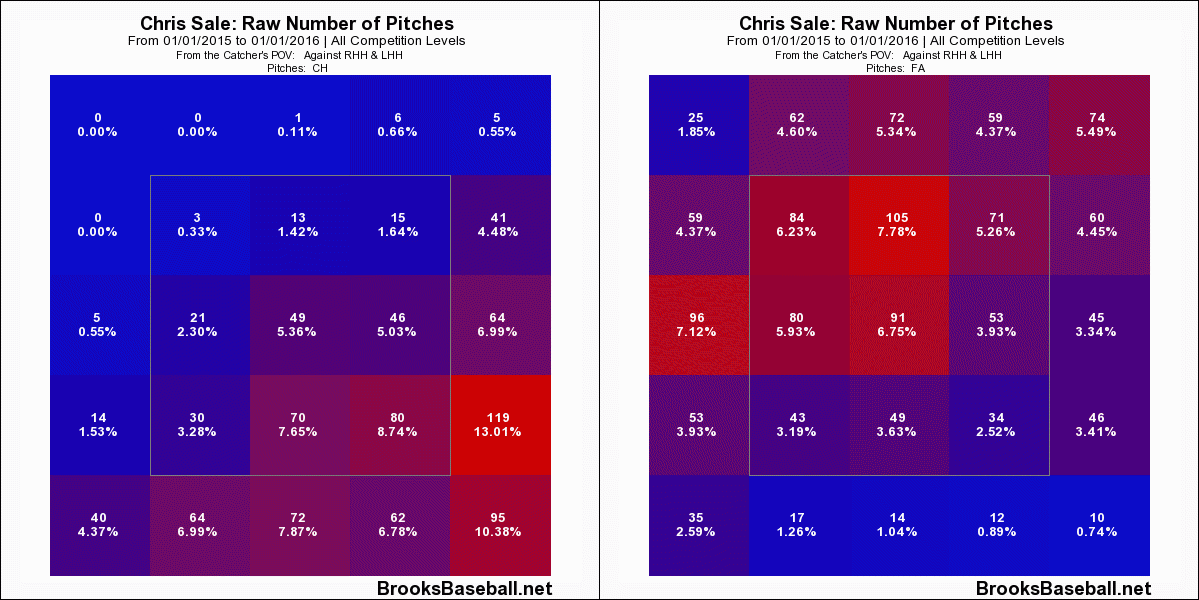 Sale’s ability to move the ball around in the zone, change speeds, and give opposing hitters varied looks regardless of their handedness is key to his success in recent seasons. All of which has combined to make him even more skilled at collecting third strikes than he was before. One of the most important takeaways, though. is that it means Sale is less reliant on his slider—which is good, because it looks like throwing it hurts.

Kyle Boddy, a pitching development expert and founder of Driveline Baseball, has written that there does seem to be some statistical evidence that increased slider usage has some detrimental effects on pitcher health. Sale had elbow issues in 2014 which were preceded by shoulder tendonitis the previous year. Those injuries were minor, of course, but a decrease in slider usage could help keep him healthier moving forward. It likely won’t eliminate the chances of a catastrophic injury, but every little bit of injury prevention helps when it comes to pitchers.

Chris Sale has developed his changeup into a monstrosity—one that fits in nicely with his ridiculous slider and dominant fastball. Not only is the change a strong pitch in its own right, but it produces ripple effects that make Sale’s fastball even better, and diminish his reliance on his slider. The changeup has essentially revamped the repertoire of one of the best pitchers in the American League. If you’re a hitter stepping into the box against Sale, sorry, that must suck.