The postseason entails a degree of baseball-specific intensity one cannot experience at any other time of the year. The takes are at their hottest, the controversies demanding, the media cliches flowing endlessly, like craft beer into an internet baseball writer’s thirsty glass. Fandom, at its root, is an expression of belonging. While these senses of belonging and allegiance are performed steadily over the course of the regular season, the increased leverage that accompanies postseason play necessarily intensifies the severity of baseball-related expression in all its forms. Here, in this piece, we shall examine and gorily analyze a few notable instances of postseason expression. 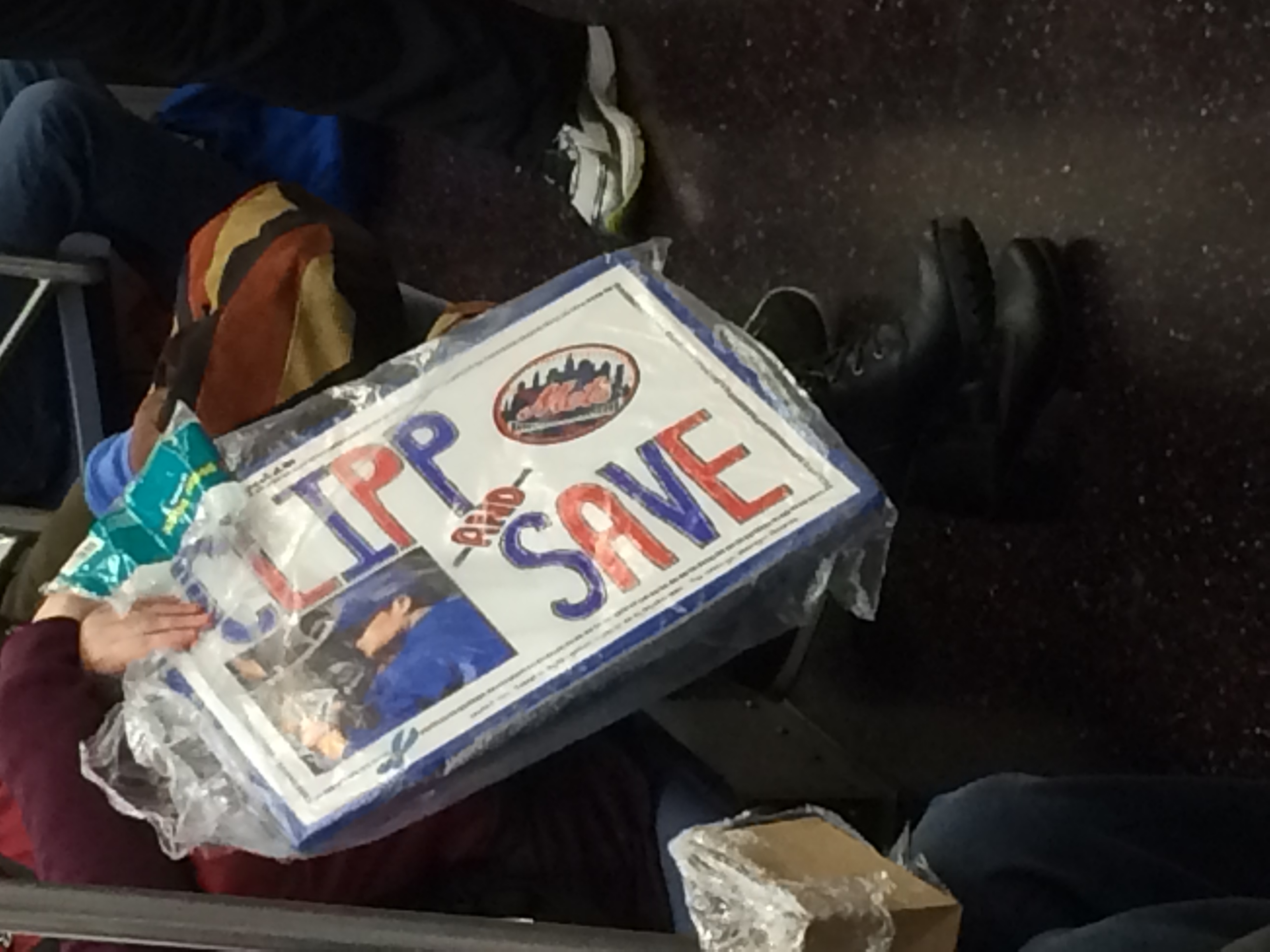 As we all know, Tyler Clippard no longer gets saves, as the role of closer for the Mets is occupied by the hulking, downward action-inducing colossus that is Jeurys Familia. So what then do we make of this sign, which was displayed (proudly most likely) during Game One of the NLCS? The answer of course is that the sign’s owner is a devout supporter of hardline sabermetric doctrine. The sign obviously implies that Clippard should be the one picking up easy saves, up three runs in the ninth, while Familia, the team’s relief ace, should be deployed in generous helpings when high-leverage situations arise. Kudos to you, subway-going sign carrier. Who says the average fan isn’t sabermetrically-inclined? When the Brewers play the Mets next year, this fan plans to display a sign that reads, “Hey Lohse! You’re performance last year was D-R-A-eadful!” 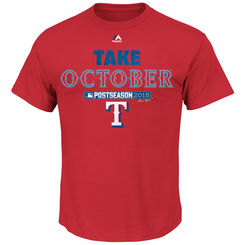 Take it? Where? And who is supposed to be heeding this direction? Anytime your expression could be mistaken for a Borscht Belt joke that trades on the inexact meaning of an expression, you're in dangerous territory. Take this shirt, please. 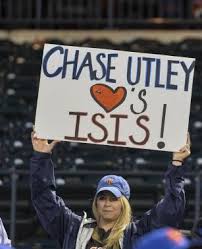 In the wake of Chase Utley’s controversial take-out slide of Ruben Tejada on an attempted double play turn, the accomplished second baseman received strong doses of criticism from fans and the media alike. One Mets fan, however, was brave enough to show her support for the embattled Utley during one of the NLDS games that followed, by displaying a sign that read, “Chase Utley Lovess Is Is”. While the love was clear, the aim of the sentiment was hazy, as this woman unfortunately failed to properly check over her sign for typos before heading out to the ballpark that day. We must then negotiate the possible meanings she intended:

It’s plainly apparent to us that she meant for the possessive “’s” to append “Utley.” with (of course) only one “Is” appearing after the heart; her downward-facing arrow, meanwhile, was too sloppily drawn, and resembles an exclamation mark. The resulting collection of words and symbols, of course, should have read, “Chase Utley’s Love is ↓” with the downward-facing arrow indicating that ­she’s Chase Utley’s love. This shows how important careful grammar is; why, misread, one might misread this sign entirely. While this woman’s heart was in the right place, she nonetheless suffers from the same unfortunate affliction that affects all Mets fans—tha uter inalbliliti to contruct granmaticly-sount, currectly-speled centences. 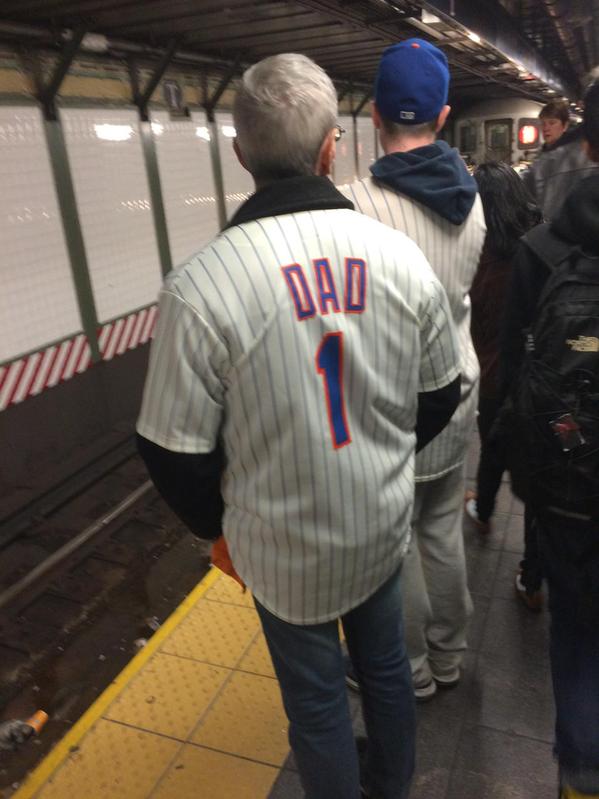 I find it hard to believe that out of all the fathers in the world, this patiently waiting Mets fan is ranked number one. How did he come by this ranking? Was there a dad playoff somewhere that we as an interested public were not aware of? Were our precious tax dollars spent on organizing and producing this tournament? Where does Donald Trump stand on the issue? Perhaps there’s a BCS-like rating system out there that aggregates dad-specific performance in a number of relevant areas of dad-hood. If that’s the case, this guy probably got a major boost in his iterative strength of schedule rating by bringing Five Guys to the most recent neighborhood pot luck luncheon. The #1 Cubs dad inevitably brought shame and sadness. 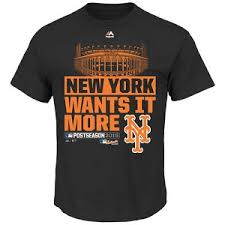 The existence of this shirt in 10 shades pledges that all 10 of the major-league clubs that participated in postseason play “want it more.” This claim, however, does not pass the test for logical consistency if held up to even the most basic level of scrutiny. The Royals, Mets, Cubs, Blue Jays, Astros, Rangers, Cardinals, Dodgers, Pirates and Yankees simply cannot all “want it more.” It would be more appropriate instead, to indicate the degree to which each playoff team “wants it” relative to others, using relational statements. Now that we’ve reached the World Series, it’s become apparent which teams actually “wanted it more.” Thus, I propose that Major League Baseball produce a commemorative line of merchandise that would match up with the actual events that transpired over the course of the 2015 postseason. For example, “Toronto wants it more than Texas but less than Kansas City” would look great on an overpriced T-shirt. Or how about “Pittsburgh wants it just as much as New York (AL) but not nearly as much as New York (NL) or any of the other playoff teams,” printed on a V-neck ladies’ shirt that will only be worn once then discarded disgracefully in a Bennigan’s parking lot. Generic postseason slogans are out. Long live specificity!

Conclusion
When attempting perform fandom during the postseason, let your opinions run wild but be prepared for people to call you out on your mistakes, same as they would call out Terry Collins or Harold Reynolds. The leverage index for expression is at a season-long high, so there’s little room for error. Check your facts, include supporting evidence and be specific. With as few as one and as many as three games remaining, the clock is ticking. Express your fandom now or hold your peace for the cold, desolate, handegg-filled months that lie ahead.

You need to be logged in to comment. Login or Subscribe
bherring24
The Nationals did a t-shirt giveaway back in the day (the Matt Capps as closer era, so long, long ago) featuring the Clipp & Save motto. http://dc.sbnation.com/2010/6/3/1499368/nationals-giveaway-clipp-and-save-tyler-clippard-matt-capps
Reply to bherring24
ezrawise
Ah yes. The Capps Era. I believe that came between the Cenozoic and Mezozoic Eras, right?

Reply to ezrawise
collins
Capp and Save?
Reply to collins