keyboard_arrow_uptop
Subscribe to Baseball Prospectus
In the waning days of May 1981, Ben Zobrist entered the world in Eureka, Illinois, about 130 miles southwest of Chicago. Twelve years later and 2,000 miles further west, in Woodinville, Washington, Michael Conforto joined Zobrist here on Earth for a few shared revolutions of the sun.
Despite their shared profession—both, you might be aware, are big-league baseball players—the two men don’t have a great deal in common. For one thing, there’s that twelve-year age gap. I know most of you have very little context for this analogy, but you should know that that’s the same age difference as between my neighbor (9) and my cat (21). You don’t need to know either well to know that that’s a big deal. And the differences don’t end there: Conforto, like my cat, is dark-featured and swarthy; Zobrist, like my neighbor, is blond, tall, and lean. And Conforto was drafted a decade later, and 174 spots higher, than his sometime-opponent in powder blue.
So yeah, there are differences between the two men. There are between any two of us, I guess. But tonight, a bright line ran between Ben Zobrist and Michael Conforto, and from it hung the balance of this fourth game of the 111th World Series. Let’s take a look at how their nights unfolded Saturday night in New York, and through them, let’s look at the game they both played.
Zobrist the First
Alcides Escobar singled to lead off the game. That was good for Escobar—he’s having a wonderful postseason—but bad for the Mets’ battery of Steven Matz and Travis D’Arnaud, who now had to contend with a stolen base threat dancing off of first, and Zobrist at the plate besides. And sure enough, on the final pitch of Matz’s sequence to Zobrist (on which he struck out), Escobar took off for second base. To my eye, he had the base stolen, easy, but Zobrist’s collapsed front leg carried his bat and upper right shoulder squarely into D’Arnaud’s throwing lane. That meant that… well, you can watch it for yourself.
That single play erased 7.2 percentage points of win expectancy for the Royals, which is an awful lot of points to lose on the second play of the game. If you’re looking to assign credit for that loss, look no farther than D’Arnaud’s quick thinking: he managed to turn a stolen base into a double play without ever letting the baseball leave his hand.
Conforto the First
The bottom of the first passed quickly into eternity for the Mets, as Curtis Granderson, David Wright, and Daniel Murphy went down in order. The second inning, in both its halves, proceeded much the same, as did the top of the third. In fact, between Escobar’s single to lead off the game and his groundout to end the first half of the third, the only baserunner for either team was the Royals’ catcher, Sal Perez, who singled in the top of the second.
And so as Michael Conforto settled into the box against Royals starter Chris Young to lead off the third inning, you wouldn’t have been too far out of line if you’d called this game a “pitcher’s duel.” You wouldn’t have been too far out of line, but you would have looked pretty silly in front of your friends—because Conforto did this to Young’s first pitch of the inning:
That’s the first World Series home run by a rookie since Buster Posey took Darren O’Day deep in Game Four of the 2010 Classic. I don’t know what pitch O’Day threw then, but the pitch Young threw Saturday night was a letter-high fastball at 87 mph. I say it was an 87-mph fastball only because it didn’t stay that way for long: the moment it connected with Conforto’s bat, it gained an instant 20 mph, and didn’t come to a complete stop until it reached the right-field bleachers a few seconds later, 395 feet down the line.
I mean, look at this thing: 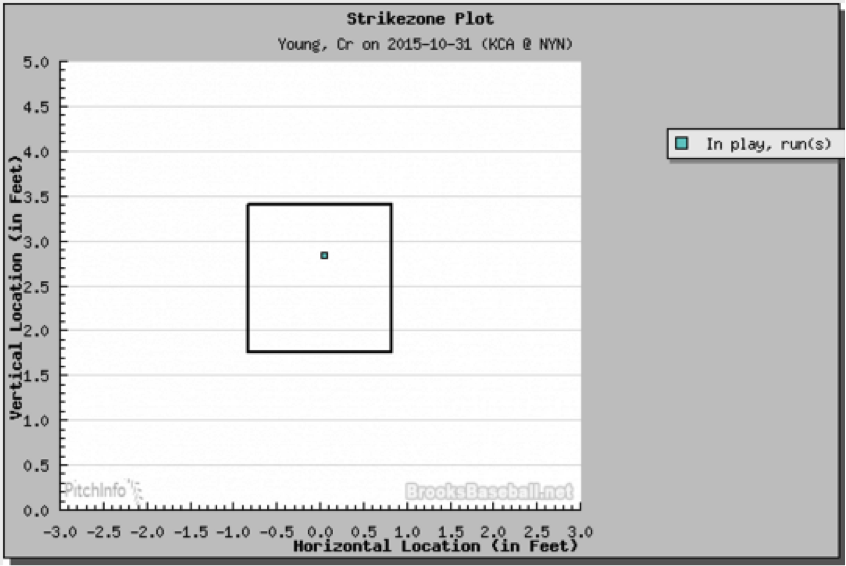 If you ever have the chance to avoid it, try not to put your fastball in that spot against a big-league hitter, especially if your fastball sits at 87 mph.
Zobrist the Second
The Mets added on in the third inning, courtesy of a Wilmer Flores single, a wild pitch that moved him to second, and a perfect bunt from Matz that sent him scampering to third. That set the stage what I can only imagine is Alex Rios’s worst nightmare: he assumed, as it hit his glove, that Curtis Granderson’s flyball to right was the third out of the inning, and thus missed by a half-step nabbing Flores at the plate on the throw.
Yikes. Zobrist’s strikeout to lead off the fourth thus left his team down two as the game entered its middle eight.
Conforto the Second
By the time Conforto came to the plate again in the fifth inning, the Royals had bounced back from Rios’s gaffe. Perez hit a ball into the left-centerfield gap that took a funny carom off of Yoenis Cespedes’ foot, and scored shortly thereafter on an Alex Gordon single, making the score 2-1. That’s a little closer than any fan wants a World Series game to be, and so Citi Field went a little nuts when Conforto proceeded to do this, off of Royals’ reliever Dan Duffy:
There were a lot of amazing things about that home run—for example it was Conforto’s first ever off a lefty—but this is perhaps the most amazing:

Not a bad way to put your team up 3-1.
Zobrist the Third
By the sixth inning, Royals’ starter Chris Young was long out of the game—remember that pitch he threw to Conforto?—but hometown hero Steven Matz was still very much in it. Allowing that to happen wasn’t perhaps the smartest thing Terry Collins has ever done, as Matz had been missing to the arm side for most of the night.
Collins’ faith in his starter came back to bite him almost immediately, as Zobrist drove the ball past Cespedes in center for a double to lead off the frame. Seconds later, Lorenzo Cain would single right up the middle, scoring Zobrist and chasing Matz from the game.
The game was thus 3-2, New York, as it headed to the bottom of the sixth. The Mets went quietly in that inning, and the Royals did the same in the top of the seventh. Conforto, seeking a third World Series home run in as many Game Four plate appearances, came to the plate in the bottom of the seventh with the chance to put his team up by two late in the game.
Conforto the Third
But he struck out.
Zobrist the Fourth
That turned out to be a bad move on his part, as the Royals weren’t done yet—not by a long shot. Escobar grounded out to start the eighth inning, but Zobrist—who’s good at this sort of thing—managed to work a walk off of Tyler Clippard without ever taking the bat off his shoulder: 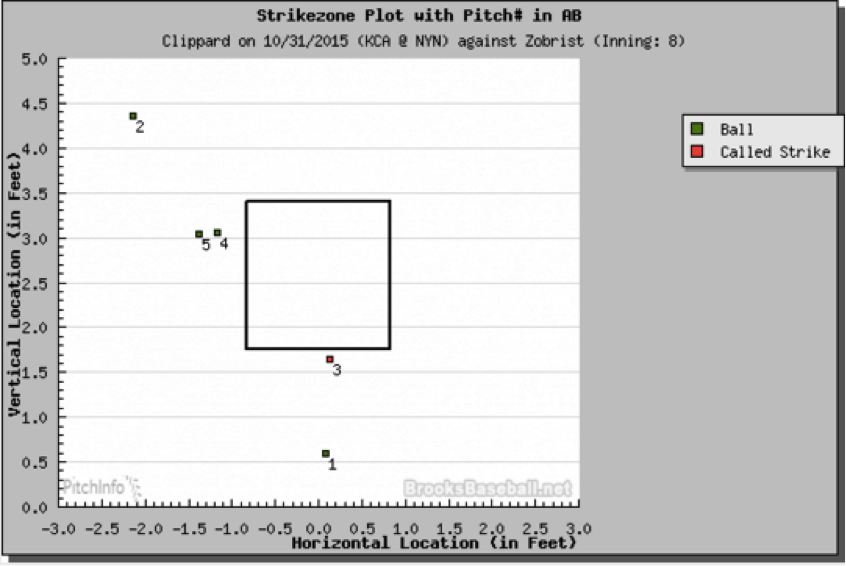 After Cain followed Zobrist with a walk, Collins had seen enough from the former National. He lifted Clippard for his closer, Jeurys Familia, who managed to get Eric Hosmer to hit a weak ground ball to the right side. Awesome, right? Not quite.
Guess who scored on that play? None other than Eureka, Illinois’s own Ben Zobrist. (Did you know that Ronald Reagan spent four years of his life in Eureka, graduating from Eureka College in 1932? I did, because I once spent four hours watching an entire PBS American Experience on Reagan’s life. But I digress…) Murphy’s error allowed the Royals to tie the game at three. Mike Moustakas, quiet for the first part of the game, then quickly came through with a ringing single to right field, scoring Cain and putting Kansas City up for good.
The Royals would add another run in the inning, courtesy of a Perez single, and by the time the Mets came up to bat in the bottom of the eighth, they were down two runs with just six outs left to play with.
Conforto the Fourth

Turns out that wouldn’t be enough: this at-bat never happened, as Conforto was double-switched out of the game in the eighth. The Mets went down in order in the bottom of that inning, and although they put up a fight in the bottom of the ninth, bringing the winning run to the plate in the person of Lucas Duda, Duda’s double-play lineout ended the game, with Conforto watching from the dugout. It’s really a shame. It would’ve been great for my #narrative if he’d ended the game, one way or another. Instead, this did:

Cespedes was a hero last month in New York. Tomorrow, he’s just the guy who strayed too far off of first. To be fair to Cespedes, though, the game wasn’t really about him. Between them, Zobrist and Conforto accounted for half of the game’s eight runs, and it was Zobrist’s walk in the eighth inning that set the game-winning rally in motion. Not bad for the 184th pick of the draft. And not bad, either, for a kid who started the season in Single-A St. Lucie. Baseball’s a funny game, and it turns on strange axes. Today, that axis ran from Eureka, Illinois, to Woodinville, Washington, passing through time, space, and memory along the way.

You need to be logged in to comment. Login or Subscribe
phiago
Thanks for the write up. FYI Your last section is forgetting the point that Conforto was removed from the game in a double switch when Clippard came in to begin the 8th.
Reply to phiago
rianwatt
Fixed, and thank you!
Reply to rianwatt
glennrwordman
Small correction: Moustakas singled...
Reply to glennrwordman
rianwatt
Fixed - appreciate it!
Reply to rianwatt