One of the most frustrating things about trying to win at baseball—particularly for a manager—is there’s not that much you can do besides be good. You want to walk around your block figuring out how to crack this darned problem, to have your The Theory Of Everything moment and run into the classroom scribbling frantically, like as if you could discover that if you just do this then there’s no way you can lose. But there’s no this. There are very few counterintuitive strategies in baseball. There’s no “that’s not an ugly old lady, it’s actually a beautiful young woman!” perspective you can stare for. You’re stuck with the official story: Baseball is almost entirely throw a pitch exactly where you’re trying to, even though that’s hard; or hit it as far as you can, even though that’s hard. The guy who does the hard thing wins. There’s no easy option.

The exception, perhaps the only exception, is the bunt. The bunt is baseball’s one Eureka! discovery: The other team is all the way out there, so what if I just do a doink? It’s relatively easy, it’s totally counterintuitive, and so, naturally, it’s long been every manager’s favorite tool, even if it’s often a waste of an out. You want to do something, and bunting is something.

Which makes Ned Yost even more interesting. We already knew that Ned Yost is, by far, the least meddling manager in baseball. He doesn’t change his lineup, he doesn’t pull his pitchers early, he rarely walks out on the field in the middle of an inning, he’s not a platooner or a pinch-hitter, he doesn’t pitch out. He does call for a fair number of bunts. Or, at least, that’s what we thought, until Game One, when we learned that Yost's seemingly silly instruction that Lorenzo Cain sacrifice bunt turned out to be Cain’s own choice. Wait, Cain can just choose? Oh, yes, Yost told reporters afterward, Cain can just choose. The Royals almost always call their own bunts:

Explained Yost: "We give our guys the freedom to play their style, give them the freedom to bunt. A lot of times we'll put hit-and-runs on, but I don't think I put four bunt signs on all year. He just felt like our best chance of winning the ballgame was to get it down, get the runner to third and [someone would] drive him in from there."

“I don’t think I put four bunt signs on all year.” Let’s say he’s exaggerating slightly, and that he did put four bunt signs down. The Royals’ pitchers had two successful sacrifice bunts, and attempted two more. We have to assume that even Never-Meddle Ned’ll call for a bunt when the pitcher’s up, right? So there are our four. Which leads us to presume that the rest of the Royals’ 45 sacrifice bunt attempts, including 11 by Alcides Escobar, came on the players’ own authority. He just… lets them play. This is the most incredible thing I learned this postseason, almost nearly as incredible as learning last October that Jon Lester hadn’t thrown a pickoff attempt all season.

Jacob deGrom didn’t allow a hit until the fourth on Wednesday, but there were signs around then that the Royals weren’t as hopeless as that. DeGrom’s fastball was hard but it was sailing up and over the middle of the plate, and after getting away with a few to Lorenzo Cain (out one) he went first-pitch slider (base hit) to Hosmer, then first-pitch curveball (groundout) to Morales, then curveball-curveball (and eventual four-pitch walk) to Moustakas. That earned him a visit from his pitching coach, after which he got Sal Perez to chase and end the fourth inning. As Jeff Paternostro pointed out,

The secret to deGrom's success has never been 96-97, it's the 70 command that goes with it.

and there were indications deGrom just didn’t have that. So 10 minutes or so later the fifth inning begins, and Alex Gordon is leading off and deGrom goes curveball, slider, slider, fastball, curveball, slider, and it’s a leadoff walk. Then Alex Rios gets a fastball, belt-high and easy to extend his arms on, and it’s a clean single, which brings up Alcides Escobar, the man in control of his own decisions, a fully sovereign individual, a Big Boy. Escobar, unsurprisingly, decides to bunt.

The first pitch is obscenely high, and it’s a fastball. Escobar offers at it as a migrating butterfly might offer at a windshield, and fouls it back. This picture doesn't even really do the location of the pitch justice: 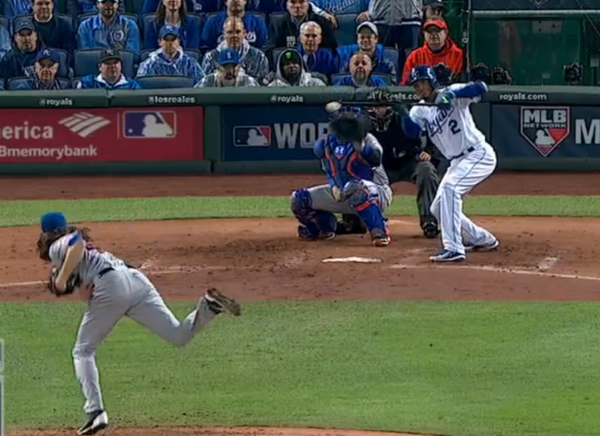 The second pitch is merely distastefully high, and off the plate away, and it’s a fastball. Escobar pursues it with the unrestrained libido of a Shaw's jird, and fouls it once more. 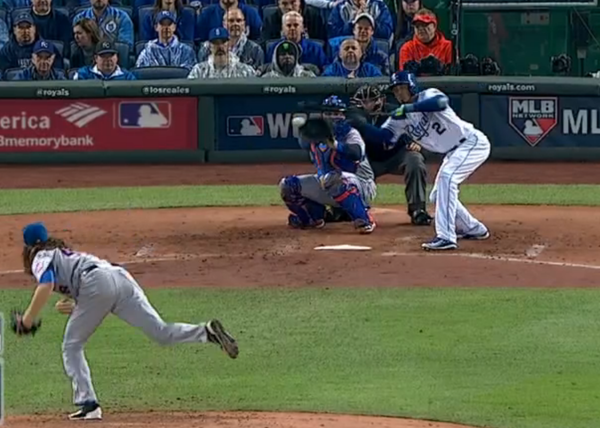 He is now behind 0-2, and the bunt is no longer a possibility. Alcides Escobar is back in baseball’s Eastern Bloc, no options, no room for imagination, no opportunities besides Hit It Hard. Escobar, after 0-2 this year, hit .190/.228/.212. Ned Yost sits in the dugout, enjoying life anyway.

Early in this postseason, when I wrote about #EskyMagic, the little placebo that could, I said this:

What’s notable about Esky Magic—both the swinging-at-the-first-pitch idea, and the leading-off-for-shrug-reasons idea—is that they both turn Escobar’s weakness into his strength.

i.e., he’s a bad leadoff hitter, but now he’s the magical leadoff hitter. And he’s unconventionally hacky in the first inning, but now it’s a charm. After Game One, you could add that he has 30-grade power and his biggest cuts produce medium-deep flyballs to left-center, but he somehow banks them off the center fielder and gets a home run anyway. And, to this, I now add one to his collection of tricks:

Seven times in the regular season this year Escobar attempted but failed to get down a bunt in a sacrifice situation. Sometimes he fouled the pitch off, sometimes he bunted and missed, sometimes he did both in the same at-bat, but in those seven tries Escobar chose bunt, failed in the attempt, and found himself where he did on Wednesday night, in a precarious hit-away situation against his will and against his strength. In those seven outcomes, he singled four times, doubled once, grounded out and struck out. The dude went 5-for-7 with .39 WPA.

There is nothing to this, but I certainly won’t stop you from believing. Sometimes it’s important to remember that Alcides Escobar is one of the very worst hitters in baseball, and sometimes it’s just fun to remember it.

After falling behind 0-2 against deGrom, Escobar got his eighth chance this year to redeem a failed bunt attempt. DeGrom threw him a slider and hung it at the top of the zone, just about dead center of the plate. 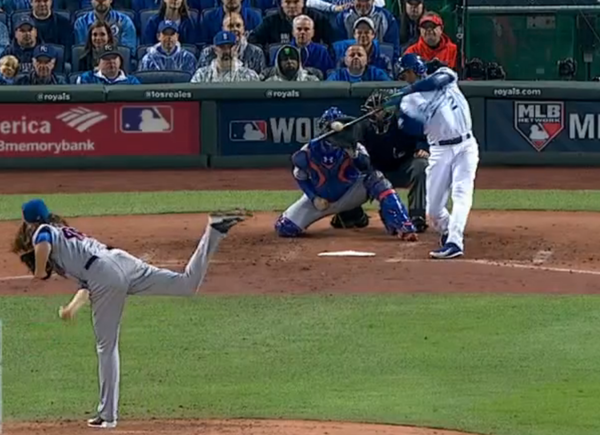 Escobar lined it into center field for a base hit. Here’s a quick-and-dirty* estimate of the Royals’ second-by-second win expectancy during that at-bat:

The tying run scored. The Mets hadn’t blown it yet—Alex Rios went only to second and stopped, which meant that Lucas Duda could play behind Escobar at first, which meant that Duda was then able to make a diving play on Ben Zobrist’s hard grounder down the line for a first out, and then Lorenzo Cain flied out to shallow center and Rios didn’t test Juan Lagares' arm. It almost seemed for a moment that the Mets were going to get out of this inning without a deficit. But deGrom without fastball command isn’t deGrom, and unfortunately for the Mets he also isn't a fresh arm out of the bullpen: He goes slider-slider to Hosmer, and the second one is banged for a single. Changeup-changeup to Morales, and the second one is banged for a single. And, after falling behind on Moustakas, a 3-2 curveball that is banged for a single. The game, by late-innings Royals standards, is out of hand.

The Royals lead the Series 2-0, because Alcides Escobar couldn’t get the bunt down. (Also, Johnny Cueto threw a two-hitter.) One imagines Ned Yost, staring out at the field, watching every one of his shortstop’s flaws turn into something great, and thinking, “this is easy.”

*Using the actual starting and ending win expectancies provided at FanGraphs, and filling in the middle with my own rough estimates based on the likelihood of Escobar succeeding or failing in his designs.

You need to be logged in to comment. Login or Subscribe
timber
I've been trying to tell people for the last two years that Ned Yost does not call for bunts...

Now, at a certain point you would like him to tell his players to stop that crap, but he really does just let them play.

How can he be the proclaimed worst tactical manager in baseball when he has no tactics?
Reply to timber
gpurcell
I've believed for a long time that managers have only very limited ability to help teams through tactics (which is the conventional wisdom) however they have much greater capacity to harm teams through their "tactics" (which I don't think is fully appreciated).
Reply to gpurcell
GoTribe06
Great game recap. I anticipated reading an article focused on Cueto and got six words about him (I guess two-hitter is one word?). But I am enjoying this Escobar ride while it lasts!
Reply to GoTribe06
apbadogs
"Ned Yost sits in the dugout, enjoying life anyway."

This line made me laugh, nice.
Reply to apbadogs
jfranco77
Someone, probably Bill James, said "If they're trying to give you an out, just take the damn thing." (Maybe it was Casey Stengel, but I'm leaning towards James)

The Mets didn't do that last night and it burned them.
Reply to jfranco77
hotstatrat
It's so nice to have the joy of Sam's writing back.

Now, if only BP would get their injury report and record keeping back on track, we'd have an indespensible website again. Does anyone know of an alternative for injury history and diagnosis besides clicking back through Rotoworld News on individual players?
Reply to hotstatrat
Tracyy
I love this piece. It captures the...weirdness... of baseball perfectly.
Reply to Tracyy
oldbopper
It has been known forever that the best offensive play in baseball is the unsuccessful sacrifice bunt.
Reply to oldbopper