The consensus coming into Game Two was that the pitching matchup favored the Mets. After all, the last time we saw Johnny Cueto, the Blue Jays torched him for eight runs. Through all the shimmies and quick pitches, Cueto had looked very shaky since coming over to Kansas City at the trade deadline. On the other hand, Jacob deGrom fanned 13 Dodgers in his first-ever playoff start and followed that with two more very good outings despite not having his best stuff.

Both pitchers breezed through the first three innings. One of them ended up only lasting five innings (and even that was probably too long), the other tossed a masterful complete game, holding up his end of the bargain in what ended up being a one-sided affair. As the fourth inning unfolded, it looked like one of those two very good pitchers might hit the showers early. It wasn’t deGrom.

It was Johnny Cueto who lost all familiarity with the strike zone. First he walked Curtis Granderson. Then he threw three straight balls to David Wright. Wright was taking all the way on the 3-0 pitch and took a fastball right down the middle. Cueto missed up with a fastball on the next pitch, and Wright fouled it off his front leg. Cueto missed up again with a fastball on the payoff pitch, and Wright could only manage a weak foul pop up. It’s been a rough return to the playoffs for the Mets captain. One out.

Cueto’s issue locating his fastball in the inning continued against Daniel Murphy. Salvador Perez set up low and in but his pitcher missed up and right under Murphy’s arms, eliciting a very audible, “AYYYYYYYYYY” from the Mets postseason hero. A missed target, yes, but it also set up the rest of the at-bat well for Cueto, allowing him to work away more effectively. The only problem was that Cueto’s pitches missed off the plate and Murphy drew the second walk of the inning.

That brought Yoenis Cespedes up to bat. Cueto missed inside with a fastball for ball one. His next pitch was a slider that appeared to clip the top of the zone but was called a ball. Tough call, but another pitch that missed above the zone. Cueto came back with a fastball in and Cespedes actually did him a favor, fouling off an offering that was off the plate. Cueto’s next pitch missed in and Cespedes found himself in yet another hitter’s count. Cueto came back with a fastball low and in, right in Cespedes’ wheelhouse. 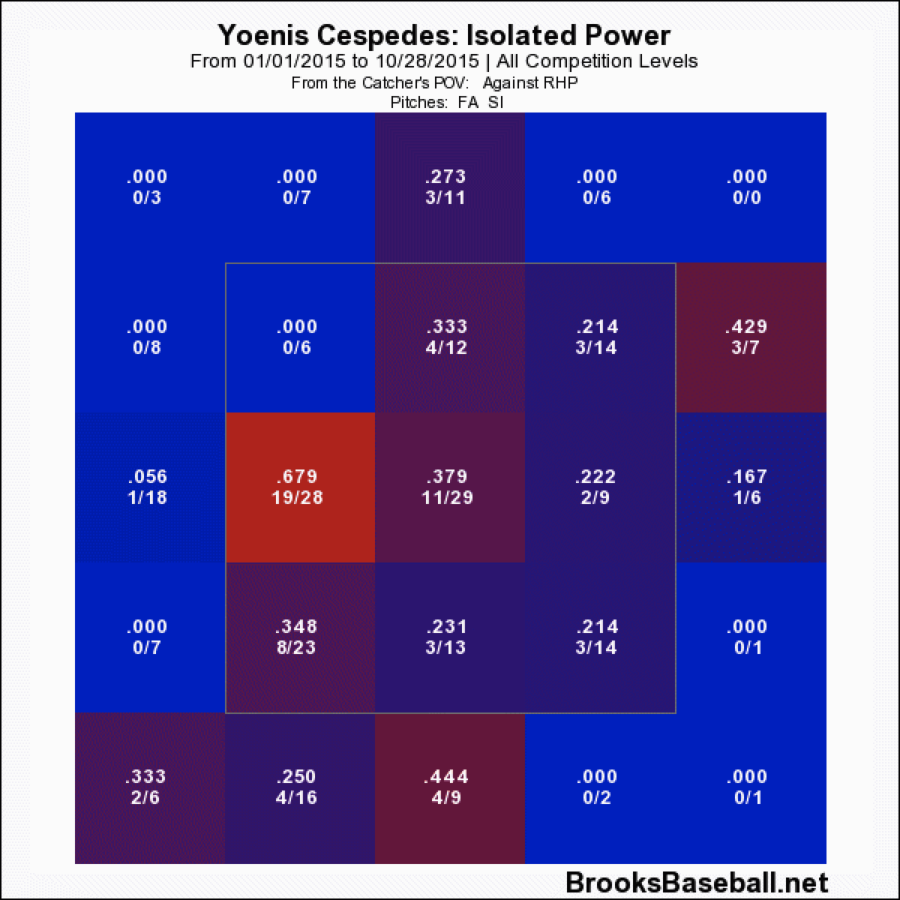 The Mets’ prized midseason acquisition has struggled for most of the postseason and has admitted that the shoulder injury that forced him to leave Game Four of the NLCS has not fully gone away. That he was sitting in a favorable count against a pitcher struggling to throw strikes, got a fastball in a place he usually crushes it, and only rolled the pitch over to third base seems to be an indication of where he’s at right now. Or maybe it’s not, since squaring up 93 mph is still really hard. Either way, Cespedes had a chance to keep the line moving, and instead, Cueto looked like he’d escape the inning unscathed when Moustakas fielded what looked like an easy double-play ball.

Except, after he touched third base for the first out, Moose’s throw to first pulled Eric Homser off the bag. Cueto needed all the help he could get at that point and his usually-flawless infield defense gifted the Mets an extra life. It was a close call at first base, with Hosmer’s foot being pulled just inches off the bag. It was close enough that it was somewhat surprising that the Royals didn’t challenge the call.

Lucas Duda was up next. After ripping a pair of hard-hit balls through the shift in Game One, the Mets first baseman added two more hits on Wednesday night, only these two singles couldn’t have been any more different. In the second inning, Duda reached on an infield single, a squibber off the end of the bat that went to the one part of the infield where the Royals didn’t have a fielder. His second hit off Cueto, which drove in Murphy and gave the Mets a 1-0 lead, was a softly hit ball dumped into shallow left field. It wasn’t exactly a great swing by Duda, but it was also another mistake pitch by Cueto: 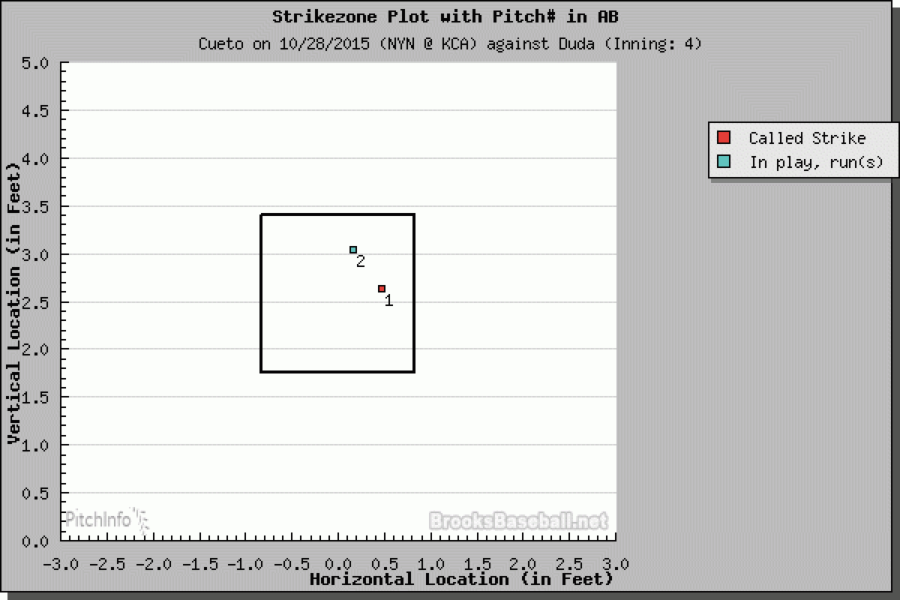 Cueto’s next mistake to Travis d’Arnaud was even worse: 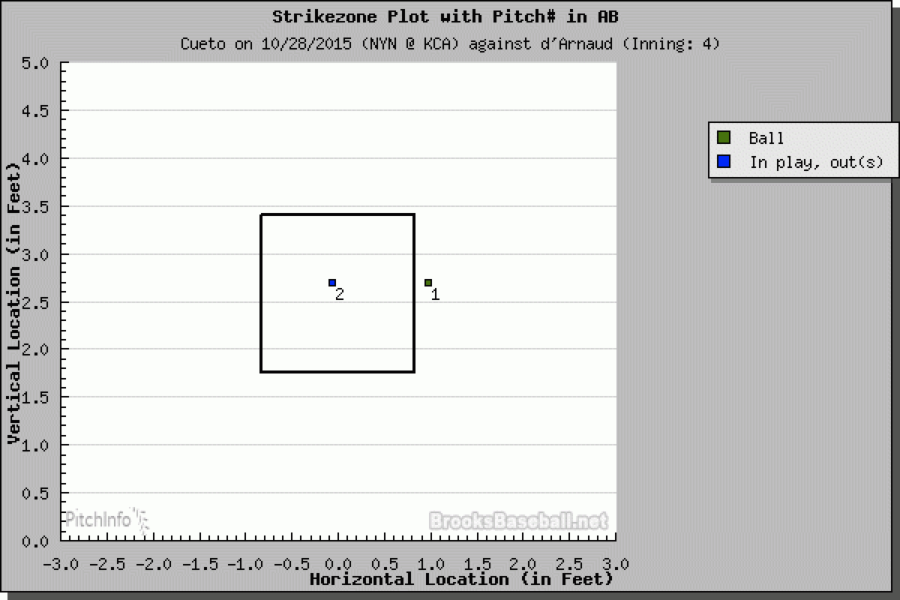 but the Mets catcher was only able to lift a lazy flyball to right field for the third out of the inning.

The Mets had drawn first blood but it felt as if they’d squandered an opportunity to do even more damage against an erratic Cueto. As it turned out, that would be the only opening they would get. From there, Cueto settled in and retired 15 of the next 16 batters. The only Met to reach was Murphy in the ninth inning, by which time the Royals were already leading 7-1.

It would be a lie to say that Cueto was locked in for all nine innings of his complete game last night. He was masterful for most of it, but for one inning he was vulnerable. Granted, he was getting squeezed a little bit, but he was missing his spots both outside the zone and inside the zone, and the Mets couldn’t take advantage. With the exception of that inning, Cueto turned in the type of performance the Royals envisioned from him when they traded away three good pitching prospects in July to have him anchor their rotation.

Still, it was a weird stat line to see associated with a complete game. Four strikeouts. Three walks. Two weak singles. Cueto didn’t miss many bats throughout the start, but when the Mets put the ball in play, it wasn’t hard hit. The only loud contact made against Cueto from that point on was in the eighth, when Michael Conforto flied out to center, a few feet in front of the warning track, and then Wilmer Flores hit a line drive right at Moustakas a few pitches later. Other than that, it was a bunch of weak grounders and lazy flies.

This isn’t to say that the Mets would have won had they taken advantage of their one opportunity against Cueto. But if they had scored two or three runs in that inning, like they probably should have, it would have changed the complexion of the game. Jacob deGrom still would have unraveled in the fifth inning—he clearly didn’t have his best stuff—but the game would have been close even after the Royals’ four-run fifth. And then, maybe Jonathon Niese and Addison Reed aren’t on the mound in the eighth inning to get smacked around and watch the game turn into a laugher.

For one inning, the Mets had a brief opening to jump on Cueto and take control of a game they desperately needed to win. Instead, they let that opening close. Cueto didn’t give them another chance to get back in it, and now the Mets will go back home down two games to none.

You need to be logged in to comment. Login or Subscribe
sunsshagger
Excellent set of observations! I would add that Cueto's 57% strike/pitch percentage has to be one of the lowest for a pitcher throwing a complete game, or even a quality start, in recent memory.
Reply to sunsshagger
50cubs
It shows the difference in approach between the Mets' hitters and the Royals. The Mets wasted favorable accounts while the Royals hung in there and turned unfavorable counts around, They didn't let deGrom off the hook.

Reply to 50cubs
thepete39
Nice piece. Seems like the Mets have either not swung at or made weak contact on lots of fastballs over the heart of the plate so far in this series.
Reply to thepete39