If Game 1 is any glimpse into what we can expect over the next week and a half from the Mets and Royals, then this is going to be one heck of a World Series.

Tuesday’s series opener had it all.

It had web gems. It had comebacks. It had a play that got compared to the infamous Bill Buckner error, only until another play was being compared to the Scott Brosius walk-off home run in Game 4 of the 2001 World Series that left Byung Hyun Kim walking off the field at Yankee Stadium with his head down. It had Bartolo Colon vs Chris Young in extra innings.

Through it all, there was perhaps no one play more crazy than the one that unfolded after Matt Harvey’s first pitch.

Escobar’s tendency to hack at the first pitch has been well documented, so the natural reaction is to question the decision to throw him a first-pitch fastball. Why not try to steal a strike with a breaking ball? The other way to approach the situation is to try and quick out. It’s not as if Harvey gave Escobar a pipe shot. The Mets battery clearly knew Escobar was geared up for a fastball, so they gave him one in a spot where he struggles to do anything with right-handed heat. 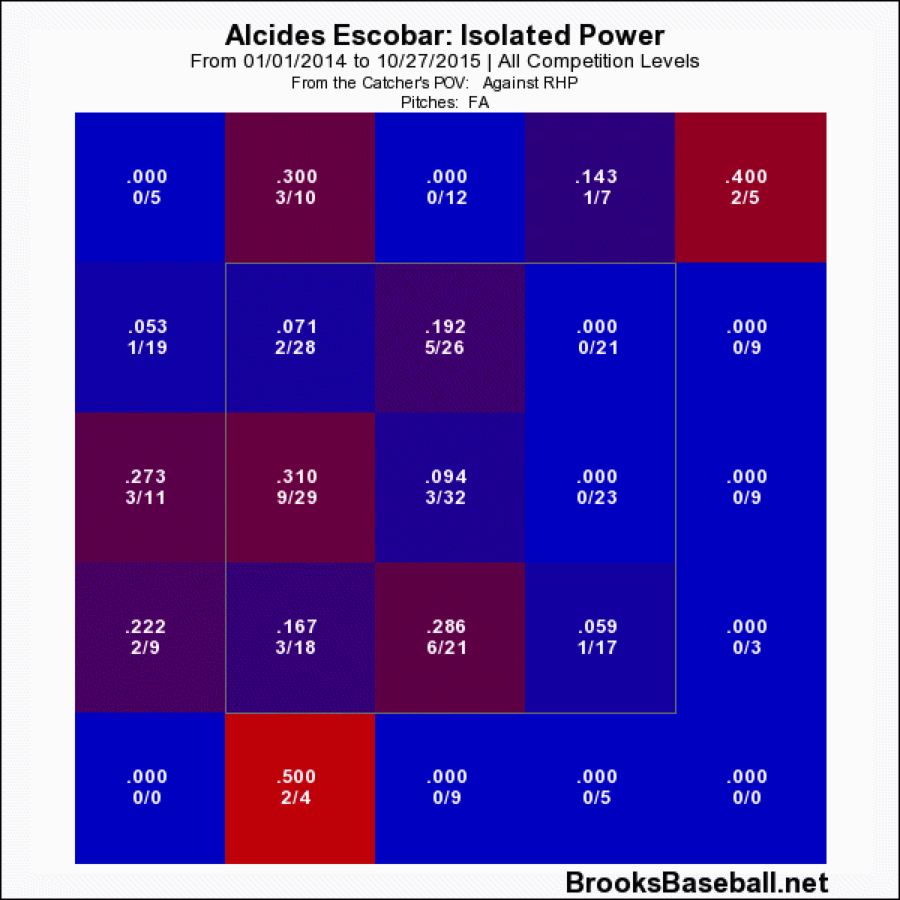 Granted, it was hard contact by Escobar, but if you’re considering the process, Harvey did nothing wrong. Yoenis Cespedes, on the other hand, was a disaster.

Then, the late peek.

That’s nearly always the center fielder’s ball, but the late jump by Cespedes probably had him second-guess at the last minute whether Conforto had a better shot at it. When he wasn’t able to pick the ball back up after taking a peek at Conforto, it bounced off him and the Royals had the early 1-0 lead.

Armed with the early advantage, Edinson Volquez was looking nasty the first time through the order. His velocity was down a few ticks from what it had been in his previous postseason starts but he was still hitting his spots with mid-90s gas that featured run. His changeup also had nasty action and the right-hander’s confidence in the pitch was evident.

He ran into trouble for the first time with two outs in the third inning, plunking Kelly Johnson with a 0-2 curveball and then walking Curtis Granderson on four pitches. With David Wright up, Volquez missed badly with a first-pitch fastball, making it four straight heaters that the right-hander had missed with.

From there he went:

1) changeup, low and away, for a called strike

2) curveball, in the dirt, for ball two

3) fastball, intended low and away, but up at the letters for a swinging strike

4) changeup, low and away, for called strike three

The pair of right-on-right changeups were key for Volquez in that at bat and was perhaps an indication that he trusted the pitch at that point more than a fastball that he was losing command of.

In the fourth inning, that command began to waver further.

First, he missed over the plate to Murphy, who ripped a single back up the middle. He got away with a mistake on his next pitch to Cespedes, who got under a fastball up for the first out. Lucas Duda smacked another heater up for a single through the shift, which moved Murphy over to third base. That advance proved pivotal when the Mets second baseman scampered home for the tying run on an infield single by Travis d’Arnaud—the last hit the Mets got that inning.

The next inning, Curtis Granderson jumped all over a fastball that Volquez left up yet again, sending it into the Mets bullpen in right field to break the tie.

The Mets were back it at in the sixth inning. Yoenis Cespedes led things off with a single up the middle and then went first-to-third when another Lucas Duda single found a hole through Kansas City’s stacked right side of the infield. With one out, Michael Conforto lifted a fly ball to medium left field. Alex Gordon has a fairly strong arm, but Tim Teufel aggressively (and rightfully) sent Cespedes, who slid in ahead of the throw to make it 3-1.

Luckily for the Royals, it didn’t get any worse from there. Moments later, Wilmer Flores ripped Volquez’s 78th and final pitch of the night down the third base line, but Mike Moustakas was there to deny the Mets folk hero an RBI knock.

In a game filled with so many crazy moments and big plays, it’s impossible to point to just one. The diving stop by Moustakas wasn’t the most important play of the game but it did keep the Mets from potentially breaking the game open and made it feel like things were still close.

When Ben Zobrist ripped the first pitch from Harvey after the commercial break past Lucas Duda for a double, it felt as if the Royals were right back and knocking at the door. Two pitches later, Lorenzo Cain took a slider the other way for a single. Eric Hosmer brought Zobrist home with a sacrifice fly that cut the lead to one. A Cain stolen base and a Kendrys Morales single later and we had ourselves a tie game.

That was all for Volquez and Harvey. From there on out it was a battle between the bullpens, with a combined 11 relievers used before the game was over.

Kelvin Herrera is a dominant reliever. He was already really good, then he went and added a wicked slider that has allowed him to strike out nearly half of the batters he’s faced this postseason. Yet, Juan Lagares, the hitter who the Mets played Kelly Johnson over when given the choice of a ninth position player, grinded out a nine-pitch at bat against Herrera with two outs. He fouled off five pitches along the way, including this nasty three-pitch sequence:

On the ninth pitch of the at bat, Lagares fisted a 98 MPH fastball on the hands up the middle for a two-out single.

Two pitches later, he swiped second base. Two outs and the go-ahead run on second base. Herrera made his pitch to Flores, a 2-2 fastball up. Flores hit a chopper to first base and the hop ate up Eric Hosmer.

No doubt, Hosmer shouldn’t have tried to sidesaddle the ball. Wilmer Flores isn’t fleet of foot and Hosmer would have had plenty of time to get the out even if he had knocked it down. The play inevitably drew flashbacks to Mookie Wilson’s slow dribbler up the first base line in Game 6 of the 1986.

The Mets were that close to putting it in the books. Jeurys Familia hadn’t blown a save since July 30, the day remembered for the Mets as the infamous rain delay loss. Justin Upton sank the Mets with a three-run homer following a lengthy rain delay in the ninth, capping a two-out comeback the day after the Carlos Gomez trade fell through. Familia had been unstoppable for the Mets down the stretch and through the playoffs and literally hadn’t blown a save since the team traded for Cespedes and taken off over the final two months.

Then Familia left a fastball over the plate to Alex Gordon.

At that point the game headed to extra innings, where just about anything could happen. We knew gravity was still in effect because Wade Davis still looked like the best reliever on the planet. But then you had wacky things questioning your sanity, like Jonathon Niese looking like a relief ace during his two innings of work, or Jarrod Dyson nearly bookending Kansas City’s night at the plate with inside-the-park-homers.

It got to the point where it was the 12th inning and the two pitchers in the game were Bartolo Colon and Chris Young. They’re two of the craftiest pitchers in the game, both finding ways to remain relevant in a game where premium velocity reigns supreme. There they were, Young at 36 years of age and Colon at 42, firing off multiple innings of scoreless relief in Game 1 of the World Series.

Colon worked around leadoff singles in the 12th and 13th innings but finally ran out of magic in his third inning of work. It was hardly his fault, either. He started the inning off by coaxing a grounder off the bat of Escobar to David Wright at third base.
Wright’s defense has been somewhat shaky since his return from spinal stenosis and his misplay two innings earlier had allowed Paulo Orlando to reach base. This time, he bobbled Escobar’s grounder and rushed his throw to first. It pulled Duda off the bag and the speedy Escobar was on to leadoff the inning.

Up next stepped Zobrist, whose double in the sixth inning had started off Kansas City’s two-run rally against Harvey and had been his hardest hit ball of the season. He came through again, this time with yet another hard-hit ball that moved Escobar to third.

Ben Zobrist two hardest hit balls of the year have been tonight… His 110 MPH double and that 109 MPH single.

At that point, there wasn’t much Colon could do. He put Cain on intentionally to load the bases to set up a potential force out at home. Fittingly enough, Hosmer, who had been bailed out earlier in the game by Gordon, lifted a Colon fastball to right field for the game-winning sacrifice fly.

Games like these often get remembered for their endings. Hence, Wright will likely catch a lot of heat for his error that led to the game winning run. But there were many moments that could have led to a different outcome. Moustakas’ run-saving play in the sixth. Hosmer’s error in the eighth. Familia’s belt-high fastball to Gordon. Granderson’s fantastic catch in the 11th. But those plays, plus so many more, just added up to a crazy marathon game that ended with the Royals wobbly-legged and the last team standing.

The fun part is we get to do it all over again in less than 24 hours.

You need to be logged in to comment. Login or Subscribe
jfranco77
Esky Magic. It's a real thing.
Reply to jfranco77
markedits
Pssssst! It's "peek."
Reply to markedits
RickStumbo
As a Royals fan, I'm hoping it really is his "peak" and he will just get even worse in the field.
Reply to RickStumbo
cmosch
Fixed!
Reply to cmosch