Outfield shifting is something I’ve written about here before. Unsurprisingly, the Astros have been heavy users of aggressive outfield positioning this season, and there’s some evidence that a handful of other teams are also joining the newest trend in optimal defensive positioning. We’ve reached the point where nearly all teams are using spray charts and data in some capacity to determine where to position their fielders, but there are undoubtedly some clubs that let the data influence them more than others.

The Royals might go against the sabermetric grain when it comes to prioritizing high contact and balls in play, but when it comes to optimizing their already elite defense, it’s clear that they use data to try and gain an upper hand. According to Baseball Info Solutions, they ranked eighth in baseball in defensive shifts in 2014. They implemented a similar number of shifts in 2015 but slid back to the middle of the pack, a result of more teams around the league coming around to the idea of shifting.

However, in 2015, the Royals appear to have extended their affinity for optimal defensive positioning to the outfield. I noticed that they have used a handful of outfield shifts this postseason, with the degree of their aggressiveness really shining through against Toronto during the ALCS. Consider Lorenzo Cain shading heavily toward the left-center gap against Ben Revere in Game Six. 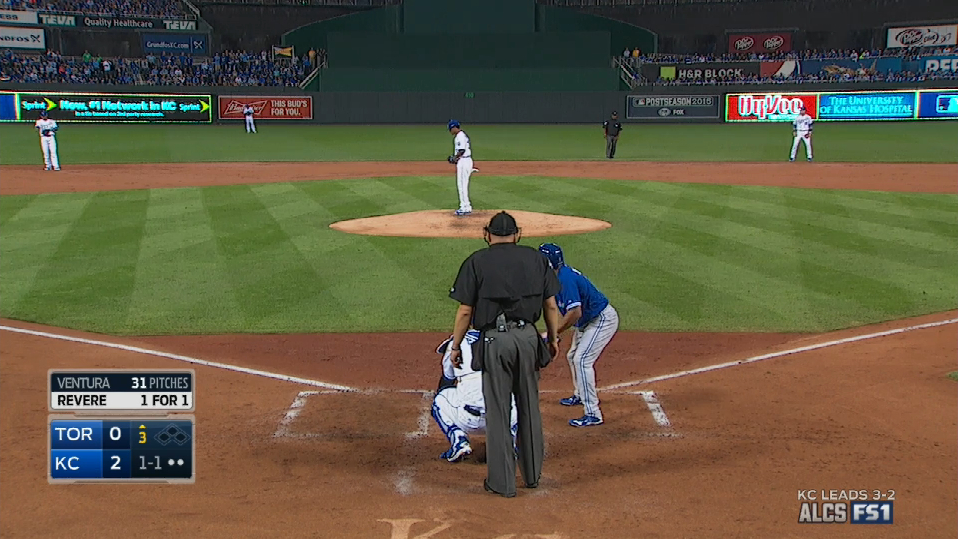 Revere and Ryan Goins were both being played to lift the few fly balls they put into play the other way, while Jose Bautista and Edwin Encarnacion were both expected to pull their balls hit to the outfield.

Much has been made about Kansas City’s advanced scouting work during the ALCS, but the aggressive outfield positioning appears to be something they’ve utilized throughout the regular season. I went back to their series this past August against the Blue Jays and found that the same hitters were getting shifted against. Recall how Cain was shaded heavily toward the left-center gap with Revere hitting last week. Here’s where the center fielder was playing with Revere at the dish against the same pitcher—Yordano Ventura—on August 1st. 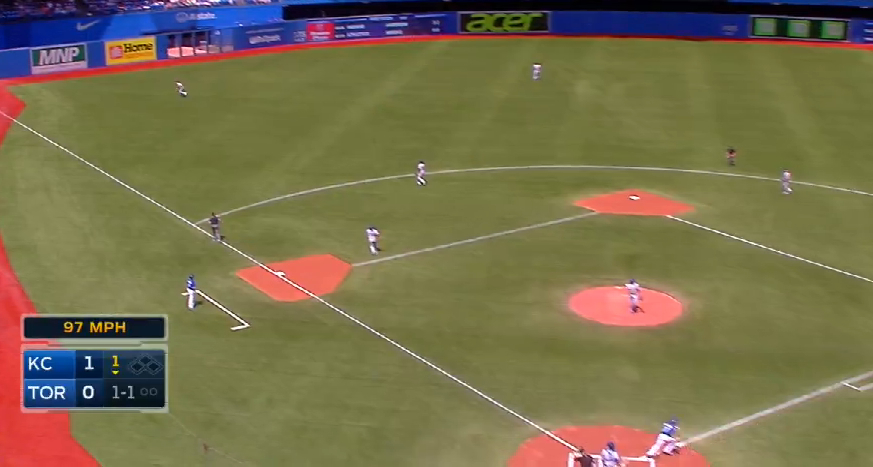 That being said, the Royals do appear to be more aggressive with their outfield positioning than they were last year. Take a look at these (blurry) screenshots taken moments after Edwin Encarnacion puts a ball in play against Yordano Ventura, one from last April and the second from Game Two of the ALCS. The different camera angles can make it hard to gauge how different Cain’s positioning is at first glance. But take a look at where he’s standing relative to both second base and the advertisement on the wall in left-center field. We’re probably talking a difference of somewhere in the ballpark of 30-40 feet.

So we know the Royals are in favor of shifting in the outfield. Against whom might they deploy such alignments during the upcoming World Series? With the help of Baseball Savant, I calculated the distribution of flyballs and line drives hit since 2014 of the 10 Mets hitters most likely to get playing time. The Royals will throw a quartet of righty starters against the Mets and the bulk of their bullpen is right-handed, so I stuck to balls hit against righties.

The Mets starters are actually fairly well balanced with their distribution of balls hit to the outfield. Curtis Granderson and David Wright are the two players in the starting lineup the Royals will likely shift their outfielders against, with Granderson pulling a good portion of his fly balls and Wright driving most of his the other way. Cain might take a couple of steps toward right-center when Michael Conforto steps to the plate.

If he gets the opportunity to swing that bat during the series, Juan Lagares would warrant the most drastic outfield alignment. Terry Collins has already indicated that he’ll opt for the superior offensive lineup with Kelly Johnson at DH rather than have Lagares play center and take away Conforto’s glove. If Collins changes his mind for a potential Game Six or Seven back in Kansas City and gives Lagares the nod, expect Cain to be heavily shaded toward right-center field. 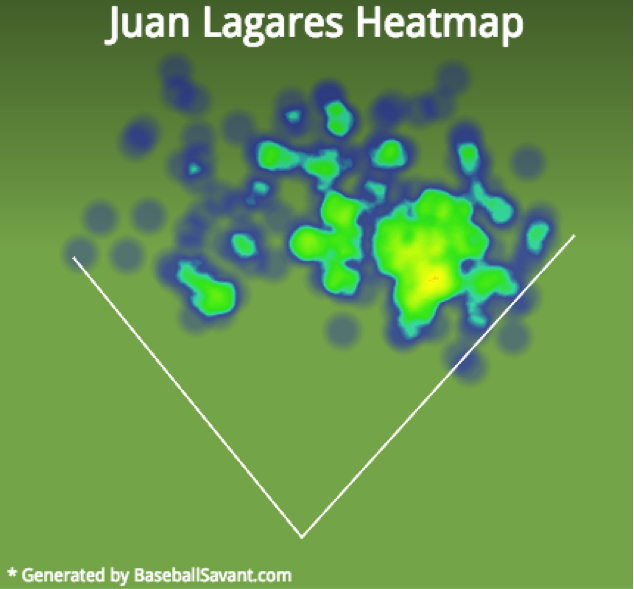 How the Royals optimize their outfield defense likely isn’t going to be the difference in the World Series. The Royals already had one of the best defensive outfields ever constructed last postseason and getting a flyball to drop in for a hit against their Ultimate Outfield can feel nearly impossible. That obviously carries more weight. You can’t fake an elite outfield. But take that elite outfield and put them in an even better position to succeed and you make an already near-impossible task for a flyball-heavy Mets offense even more daunting.