When I was a kid, I earned the nickname “Donny” from my sister thanks to my habit of breaking into a discussion by asking “what’s going on? what are you talking about?” and the recent success of The Big Lebowski. I can’t count the number of times I was told I was out of my element. It’s this phrase, heard in the thundering tone of John Goodman’s Walter Sobchak, that came to me throughout Don Mattingly’s tenure with the Los Angeles Dodgers.

Affectionately (or perhaps not) known as Donnie Baseball, Mattingly guided the Dodgers to a 446-363 record over his five years with the club. While the .551 winning percentage is nice, much of Mattingly’s career with LA focused on what he didn’t or wasn’t prepared to do. He had questions levied at him from day one, as observers noted that, despite being a long-time bench coach to Joe Torre, Mattingly had never been a manager. Would he be out of his element when it came time to call the shots?

It’s hard to say that he was. Given a team that saw 37-year-old Jamey Carroll log 146 games, Juan Uribe post a 56 OPS+ over 295 plate appearances, and Tony Gwynn, Jr. and Aaron Miles each appear in 136 games, Mattingly’s Dodgers still achieved an 82-79 record in that first year, and a third-place finish that would go down as the nadir of his tenure. Two years later, the Dodgers had a new ownership group, a new management team above him, and heightened expectations. With the team spinning its wheels heading into June, Mattingly was once again questioned. He had presided over some overachieving teams with strong veteran presences, but could he manage the headcases and the egotists, the man-children and their #squads? Having proved himself a viable manager, was he truly out of his element when surrounded by the trappings of elite talent?

Once again, Mattingly answered the call—though it’s perhaps more apt to say that Hanley Ramirez and Yasiel Puig did. While they provided many of the aches and pains that ailed the teams in the first two months, winning is a soothing balm and with it came a (relatively) quiet clubhouse, and a division title.

Fast forward to the 2014 offseason. Mattingly is catching flak for his decision not to play Yasiel Puig in an elimination game against the Cardinals in the NLDS, as well as letting Clayton Kershaw begin a seventh frame despite going on three days rest. On top of the lingering criticisms of his postseason tendencies, Mattingly had to deal with new bosses. Ownership kicked Ned Colletti to an office on a seldom-used hallway and installed the braintrust of Andrew Friedman and Farhan Zaidi among others. While it would have been acceptable had the new front office cleaned house and installed its own guys, they retained Mattingly and the questions sprung up anew: Could he adapt to their affinity for advances statistics? Could he work with a GM/President of Operations who would likely insist on more input than the previous regime?

Mattingly responded with a 92-win season, a third consecutive division title (a franchise first), and another NLDS exit. The Dodgers continued using shifts under Zaidi and Friedman, though regrettably they didn’t employ this one (from 2014) again: 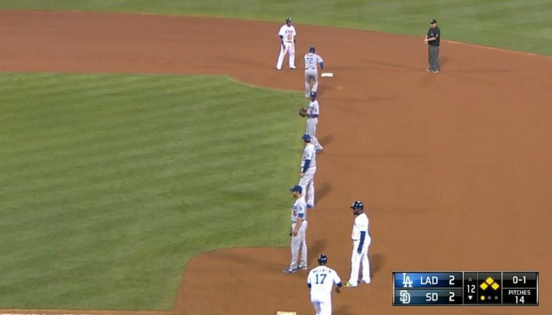 That one worked, in case you were wondering.

Mattingly also seemed to improve upon his lineup creation as time wore on. While he started off batting Joc Pederson eighth, the rookie (and his.346 OBP) hit leadoff more than anywhere else in the lineup. He was also fairly adept at taking advantage of the platoon opportunities his crowded outfield provided, as well as making the most of the versatility offered by Enrique Hernandez, Justin Turner, Corey Seager, and Scott Van Slyke. Throw in the revolving door that constituted the bullpen, and Mattingly proved to be a malleable presence for the Dodgers.

All of this is to say that for a man seemingly defined by his failures, Mattingly accomplished a great many things. Of course “great” isn’t enough when expectations are set to “best,” and ultimately these are the types of things that come with the job. Mattingly’s in-game decisions tend to leave something to be desired, but that’s something that can be said of 25 or so managers. His real work was done in the clubhouse and is probably undersold in that regard. While a number of stories and heated exchanges leaked out during his tenure, it’s not difficult to imagine the number of crises he averted. There was obvious room for improvement at the manager position, though again that is something that can be said of 25 or so teams right now. Whether it’s likely that the person replacing him will be an improvement…. that’s another question altogether and one I’m not particularly optimistic about.

Rather than turn this eulogy into a rant against the vagaries of what managers do, why they’re hired, our assumptions made about both of those things, or the Vietnam War, I’ll simply say “good night, sweet prince.”