There is not much left in the top of the seventh inning of a 5-0 game. The candy has been sucked down to the soft part, the gum has been chewed of its sugar, and the only thing left is a flavorless clump in your cheek and a wrapper that you can’t quite untwist from the lollipop stick. The win expectancy of a 5-0 game in the top of the seventh is 97 percent, and even relative excitement barely moves the needle—had Marco Estrada allowed the first two men to reach in the seventh, the Jays would still have been ~ 92 percent to win.

And yet, in a sort of unforced error/undeserved miracle, the seventh inning of Game Five turned into a moment of semi-hidden high-leverage; semi- because we all could see it, -hidden because no box score will show it.

As Estrada stared in at the seventh inning’s leadoff hitter, Alcides Escobar, FS1’s cameras stared into the Blue Jays bullpen, where David Price was warming up. The old Ace Starter Working In Relief Because Legends Are Born In/There’s Only One October is always an exciting development, but this one was unusual because, when it comes to David Price and relief work, John Gibbons is what foreign affairs experts call “not a rational actor on the world stage.” When David Price gets up, we have no idea what the plan is—he might be getting his throw-day work in, and he might be gearing up for the three-inning save. The clues were that it was not the former—Price was working quickly, 12 seconds between pitches, and looking in to the field in a way that suggested what he was doing depended on what Estrada was doing.

And there are the other possibilities in between; and there are the other ripples in usage that are also unpredictable, because that’s the important thing to note here: We have no idea what Gibbons will do. Normally we have most of an idea what a manager will do, but when’s the last time you were as shocked by a move as Gibbons going to Price in the fifth inning, up 7-1, in ALDS Game Four, and then riding him so long that he was burned for the win-or-go-home fifth game, and then choosing to go in ALCS Game One with Marco Estrada instead of David Price, the literal best pitcher in the entire American League? At this stage we don’t know a) whether Gibbons thinks David Price is great, b) whether Gibbons thinks Price is even good enough to let start if he can avoid it, and c) if “yes” is the answer to a and/or b, whether he thinks starting is the best way to use him. We can mostly only say with certainty that he thinks Price is worse than Stroman, with some hesitation that he thinks Price is worse than Estrada, and with a bit of confidence that he sees extra value in having Price (as his Last Remaining Lefty Guy) pitching in relief, even for long periods of time, even in non-close games, even at the expense of his availability in close games to follow.

So here are the stakes:

Say Estrada lets the first two Royals on in this inning—but Gibbons was just faking, and he doesn’t bring Price into the game. Now the Blue Jays are ~ 92 percent to win this game, and 27 percent likely to win the series. Those two hits bump the Royals’ chances of going to the World Series a relatively paltry two percentage points.

Say Estrada lets the first two men on in this inning—and Price comes in. Say he faces enough batters (a couple?) that he doesn’t pitch Game Six, but does pitch Game Seven (on full rest). Stroman moves up to take Game Siz on short rest, and we assign him a one-run tax for that fact. Now the Bue Jays are 92 percent to win the game but just 22.7 percent to win the series.

Finally, say Estrada lets the first two men on in this inning—and Price comes in. Say Gibbons, operating under the same principles that led him to leave Price in so long in ALDS Game Four, leaves him in for a couple innings. Now Price isn’t in line to start Game Six or Seven—R.A. Dickey is, presumably, while Price goes to the bullpen to give Gibbons the dominant lefty starter Cy Young-candidate reliever that every manager needs this time of year. Even with Price in the ‘pen, our odds now put the Blue Jays’ chances of winning the series at, roughly, 19.7 percent.

Which is all to say that, in a game that had pretty much already been decided, there were big stakes: Two singles might be worth nearly five times as much in win-the-series odds as two singles in that situation would normally be. Which meant that Escobar vs. Estrada might have been the single biggest moment of Estrada’s start.

Or Gibbons might have been bluffing. At the time, we had no way of knowing.

In the past decade, there have been maybe a half-dozen instances where batter/pitcher matchup stats made me sit up. Escobar-Estrada shouldn’t have joined those six—just a simple 4-for-10 coming into the game—but their history together weaseled its way into my adrenal glands. This is what I’m saying: A not-exciting inning got really exciting!

Because it wasn’t just 4-for-10. It was 4-for-10 with a couple lineouts, and with no strikeouts, and 40 pitches with just one swinging strike. That’s 5 1/2 whiffs better than Escobar’s normal contact rate (~84 percent), which shows the fragility of such samples but also shows that Escobar had seen the ball well, had shown no difficulty hitting Estrada, etc. It was also that Escobar had the only hit in the game to this point, and that Escobar entered the game “hot,” or whatever, with a .600/.579/.867 line in the ALCS. It might have been Esky Magic. I don’t know. I’m not defending my position.

In their previous matchups, Estrada had thrown him ~80 percent hard stuff, and gone right at him in the zone. 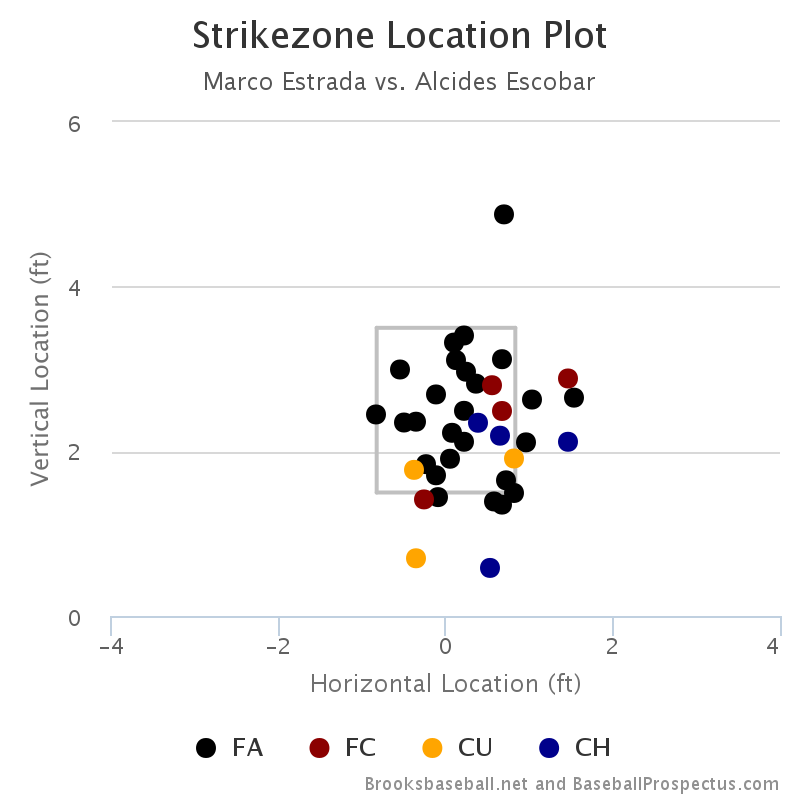 Estrada gets a target low and away, and misses low and over the plate. Could have been called a strike; could have been grounded into the 5.5 hole for a hit. It's almost exactly the same pitch that Estrada threw him to lead off the game, and on that version Esky swung and grounded out to third. Regardless, Estrada is down 1-0. Second pitch:

And there it is: The 89 mph fastball in the fastball count to a fastball hitter and it's right over the middle. Gameday assigned that pitch a Nasty Factor of 49. Can you believe it, 49? Anybody familiar with Nasty Factor's scale? Is that… low? Estrada got away with one, and he and Navarro both watch the flight of the foul ball longer than they need to. Fourth pitch:

Finally Estrada gets away from the fastball, and Escobar swings out of his pants; now he's the one staring wistfully in the direction of the foul ball he hit a pitch earlier. And the count is even. Fifth pitch:

A perfect pitch, and Escobar chases; somehow gets a piece; no chance Estrada can paint that line between chaseable and unhittable again. Might've missed his chance for a putaway. Sixth pitch:

Nope. Escobar goes even further for this one, with Navarro going so far as to turn his body in anticipation of a blocked strike three. Stays alive. Seventh pitch:

And, ultimately, it ends on a pitch that… doesn't really tell us much. It's a cutter, the first inside pitch Escobar has seen and the first fast one since four pitches earlier. It gets a lot of the plate, and Escobar hits it squarely. Some baseball happened. Nobody owned the at-bat, but Estrada owned the outcome. He would get Ben Zobrist next, then walk Lorenzo Cain–but, with just one man on, Gibbons left him in for Hosmer. Estrada got him on a first-pitch flyout, and as Estrada walked off the mound David Price applauded from the bullpen. We were left only to wonder whether we had been as close to the brink as we thought we were. Two innings later, with the Blue Jays in the clubhouse with a 7-1 win, Gibbons confirmed we were:

Gibbons thought about going to Price after the two long fly balls in 6th, and again in 7th for Hosmer after the walk: "He wasn't far off."

Let no one doubt that this is a difficult and dangerous effort on which we have set out. No one can foresee precisely what course it will take or what costs or casualties will be incurred. Many games in which both our patience and our will will be tested—games in which many threats and denunciations will keep us aware of our dangers.

You need to be logged in to comment. Login or Subscribe
jfranco77
Love this. Great job highlighting a moment that was somehow meaningful in an otherwise blah game.

Also, I love that Esky Magic has produced the classic "OBP lower than AVG" triple-slash line. How does one hit .600/.579/.867 if not by magic?
Reply to jfranco77
Zennith
Cool. Though I'm disappointed with the lack of Mets coverage though today yo!
Reply to Zennith
Richie
Yep, don't know that there are clutch hitters/pitchers, but there sure are managers that unravel under pressure. Good thing for their teams that, come Game Time, they're at best their 10th Most Important Person on the field. And probably more like 15th.
Reply to Richie