This all happened an hour ago, roughly two hours before the first pitch of a critical NLCS Game Four. The speaker: Kyle Schwarber. The recorder: Me. The context? This scene, which played out in the left field grass at Wrigley some hours earlier: 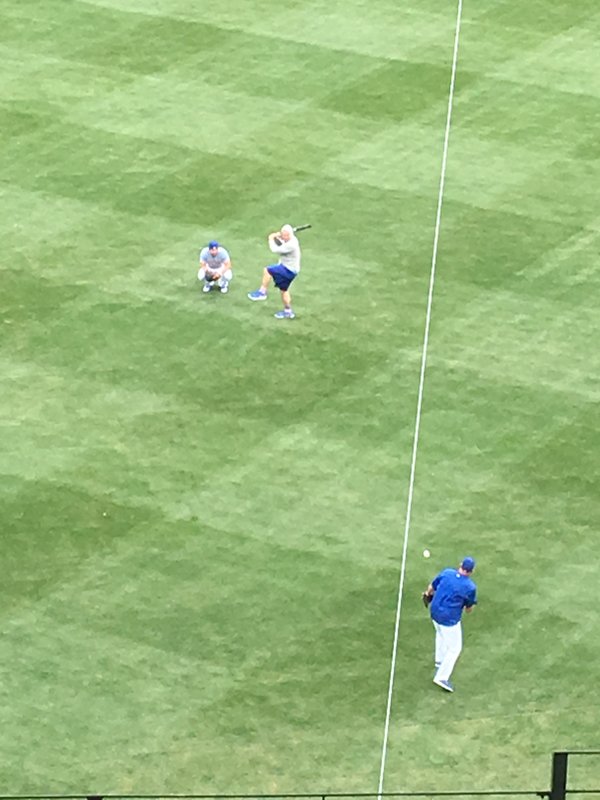 Let me break this down for you. In the bottom of the frame is Chris Bosio, the ex-Brewer and ex-Mariner who now serves as the pitching coach for the Chicago Cubs. The batter is Schwarber, who’s batting right-handed in the frame (we’ll get to that later), and the catcher is Cubs’ bullpen catcher Chad Noble, who’s been in the position (as bullpen catcher; not the specific position you see in the photo) since the start of the 2014 campaign, after falling out of the Cubs’ system in 2013. The green stuff is grass, but you knew that already. You’re BP Unfiltered readers for a reason.

Those are the players. Here’s the script. Bosio, who’d delivered a few pitches overhand to start the sequence, mixed things up with the submarine delivery you see in the picture. (Don’t ever let them tell you submarining is a lost art.) Schwarber, despite batting from his weak side, saw an opportunity and lifted his leg high—a la Baez, 2013—to prime his load and drive through the zone.

It’s fair to say that things didn’t go quite as Schwarber had hoped. (When he talked to me afterward, he called his right-handed swing “awful.”) The ball, heavy in the humid air, just barely just grazed the bat as it passed downward through the zone, and then, accelerating away from that glancing encounter, made far more solid contact with Noble’s, ahem—well, let's leave this to Kyle:

"I got him right in the man parts.”

That led to this peculiar scene: Noble, prone on the ground, clutching a sensitive area; Bosio, hands on his knees, giggling to himself; and Schwarber, the guiltiest party by far, dropping his bat to the ground and prancing around his fallen comrade, guffawing like a man who’s gone for the gonads more than once in his life.

Now, I haven’t been credentialed for very long. Maybe star players bat weak-handed against their pitching coaches four hours before elimination games all the time. Maybe they also, as the Cubs did two days ago, play hackey-sack during batting practice and emerge onto the field as the PA system blasts the theme from “Rocky”. Maybe they don’t. I don’t know. But I know this: This Cubs team is a blast to be around every day, and they’re as loose as they come right now. Just watch your stuff when they’re on the field.