The Cubs bullpen, which has been stout this postseason, gave up three runs. The offense, a group that carried them in the second half, was once again kept quiet by a strong Mets pitching staff. But it was something that’s been an issue all season that reared its ugly head once again and sunk the Cubs on Tuesday night.

The Cubs allowed 137 stolen bases in 2015, with a 22 percent caught stealing rate, both of those figures second worst in baseball. They had the worst Takeoff Rate Above Average (TRAA), at 4.6 percent, which you just need to know means that teams run on Cubs pitching very often. This isn’t about any one arm like Jon Lester and his second-worst TRAA in baseball, or catchers not being able to throw out runners. It’s about the majority of Cubs pitchers being unable to keep runners from getting big leads, great jumps and easy steals.

The Mets stole a total of 51 bases on the season, 29th in the game. Eighteen teams stole more bases that the Mets attempted (76). But in this series, New York has stolen five bases, three of which were of third base (they stole third five times in the regular season) with all three of those runners coming around to score. Each of those runs was costly, but the killer may have come in Game Three.

“We came in knowing that we had to be a little aggressive on the bases, something we don't normally do,” Mets manager Terry Collins said after his team’s Game Three win. “We're not that kind of a team. But we told the guys, look, if you get on and you think you can go, go.”

When Lucas Duda laid down a bunt with nobody out in the sixth and moved Yoenis Cespedes over to second, it seemed like an easy out handed to the Cubs. And while Duda was likely trying to beat the extreme shift, it was still an out, bu one that didn't end up going for naught.

Collins and the Mets had been taking advantage of the Cubs inability to hold runners all series and the Mets skipper was more than happy to do it again, giving a runner a green light to take a base yet again.

He was right; and it turned out to be the play that swung things for the Mets. Trevor Cahill was nearly able to work out of the jam, but a two-out strikeout of Michael Conforto turned into a run for New York.

The Met would tack on two more runs, but it was the run that scored in the sixth—and the stolen base that led to it—that turned the tide in the Mets favor.

“I blocked like three before that,” Montero said of the curveballs Cahill kept burying and Montero repeatedly stopped until the fateful strikeout pitch. “I mean, it was a tough one. I went down to block and I unfortunately… didn’t. It really hurts. I’ve blocked pitches like that many, many times and I didn’t block that one. It really, really hurt because it was strike three. But you know what? It happens. It’s part of the game. You can’t block every ball. I wish I could, but you can’t. There’s nothing I can do, you can’t change that. It was maybe a little bit too far in front. If you look at it, it wasn’t an easy block. But I gotta do better than that.”

Cahill defended his teammate, who also caught the righty during his stint in Arizona, where the two developed a trust in one another. Cahill said Montero knew the batter, Conforto, better than he did and kept calling for the hook. And while Cahill wasn’t worried about the Cespedes’ steal at the time, Montero clearly believed his pitchers need to do a better job of holding baserunners.

“The guy was almost sliding at third when the pitcher still had the ball in his hand,” Montero said. “That’s kind of been happening this year. As a catcher, you really try and rush it and you make an error. So, I don’t know, I guess we need to do a little better job at holding the runners and changing the looks. But we really don’t have time for that, we just have to go out there and win.”

It’s slight hyperbole by Montero to suggest Cespedes was sliding into third as Cahill delivered the pitch. But only slight. 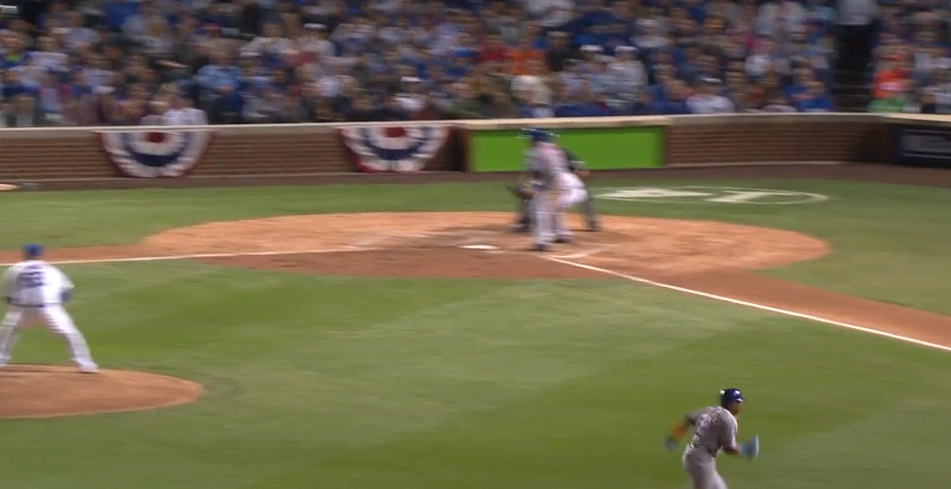 That’s the moment Montero caught the ball, and he clearly has zero chance of catching Cespedes, who is two-thirds of the way to third base. Montero’s manager, Joe Maddon, agreed that the steal was on the Cubs pitching, saying, “We permitted him to do that. That was a very big play right there.”

The Cubs silent bats will get the headlines, as will the Mets arms that have done the silencing, and deservedly so. The inability to get runners on base has certainly stung the Cubs, especially in front of their power bats, as they have five runs in the series, three of which have come off home runs—all solo shots. Maddon and Theo Epstein both talked about the team’s inability to get a leadoff hit (it’s happened zero times this series, though they do have a leadoff walk and hit by pitch) or grab a lead (again, zero times this series).

The Mets deserve credit for everything they’ve done, from brilliant pitching to doing all the small things. But their ability to not only identify one of the Cubs clear weaknesses, but also consistently exploit it, is one of the big reasons they’ve been able to dominate a series of two very evenly matched teams.

1. A lack of commitment by the team to work on this with the pitchers?
2. A mindset by the manager that trickles to his pitching staff?
3. Upper management collecting a pitching staff who are historically poor at this skill and underrating the consequence?
4. A constant shuffling of the IF players resulting in a lack of consistency in how they approach SBs defensively?
Reply to lipitorkid
johnhynes85
Seems like we are over-reacting a bit. The Mets were 1/2 in steal attempts last night with the Grnaderson CS costing the Mets a run. I would not say the one steal cost the Cubs the game. In theory, that run scores without the steal anyway on the Soler dive ground-rule double on the next play.
Reply to johnhynes85
seanqueue
Two quibbles with an otherwise excellent write-up:

First, Duda was clearly bunting for a hit against the shift, it went into the books as a sacrifice but that was not his intention nor Collins' decision to simply move the runner over in that spot.

Second, the Cubs have had the lead-off man on base twice in this series, once via a walk and once via HBP. What they have failed to do is get a base hit (0-25).
Reply to seanqueue
sahadev22
Thanks for both corrections. I guess I didn't consider that it was for a hit, just seemed straight up to me, but that makes sense.
Reply to sahadev22
shorvat
One benefit of an .074 leadoff OBP - no one is talking anymore about the Cubs' inability to get runners home from third with less than two outs.

I think the Cubs have only had one runner on third base all series, and that was with two outs.
Reply to shorvat