Game Four of the American League Championship Series between the Blue Jays and Royals was over before an out was recorded.

Maybe that's an exaggeration, but if so it's a slight one. There were a few tense moments in the third and fifth innings, yet the score never felt as close as the three-run deficit that existed as late as the seventh inning. Instead the Royals seemed to be as in control as the 14-2 final suggests, or as in control as the Blue Jays had been the night before—a game so one-sided in nature that the opposing starter resorted to the tired man-in-white theory to explain Toronto's mighty offense.

The Royals approached R.A. Dickey with such flagrant disregard that you wondered if they were the ones who were benefiting from stolen signs. Kansas City scored in a fast and furious manner and the Blue Jays' bullpen was active before the scoreboard operator had a chance to take his seat. What made the Royals' showing even more impressive was the diversity of their attack; it was as if they were filming a WikiHow video on the various ways to score a run. Let's recount the ways.

No. 1 The Bunt and the Blast
Alcides Escobar continued a postseason theme by swinging on the game's first pitch. The odd thing is he was nowhere near this swing-happy during the regular season. His 33 percent first-pitch swing rate was above the league-average mark, sure, but only by about six swings per 100 pitches seen. (On the first pitch of the game, we've noted, he has offered more than half the time.) Based on the playoffs alone, you'd think Escobar was the world's greatest hacker. Nope. He's just taken a more aggressive approach thus far, and it's worked out well for him. Go figure.

Escobar didn't make contact on his first attempt on Thursday, swinging through a knuckler. He followed that whiff by pushing a bunt down the third-base line. Josh Donaldson tried and failed to convert the ball into an out, as he couldn't nail the transfer and might not have gotten Escobar anyway.

That brought Ben Zobrist to the plate—the left-hand hitter's side of the plate, it should be noted. Zobrist had faced Dickey from both sides of the plate in the past, but opted to maintain the platoon advantage this go around. Good call. Zobrist took a knuckler for a strike, then drilled the second pitch he saw into the right-field bleachers. Four pitches into the game, the Royals had a 2-0 lead.

No. 2 Use Your Limbs
Lorenzo Cain kept the Royals' offensive going by walking on six pitches. He later swiped second base. The common misconception about Dickey is that he's as easy to run on as Tim Wakefield or other knuckleballers. He's not. Dickey employs a knee-pop pickoff move that is technically a balk but is realistically seldom called. As a result, baserunners ran on him less often than the average pitcher. Nonetheless, Cain stole the base by a wide margin, so credit him for that.

Eric Hosmer then summoned some of that same magic that made us rethink clutch and offensive skill sets in Game Two. This is the pitch he chose to swing at on 2-1—the baseball equivalent of the no-no-yes shot in basketball: 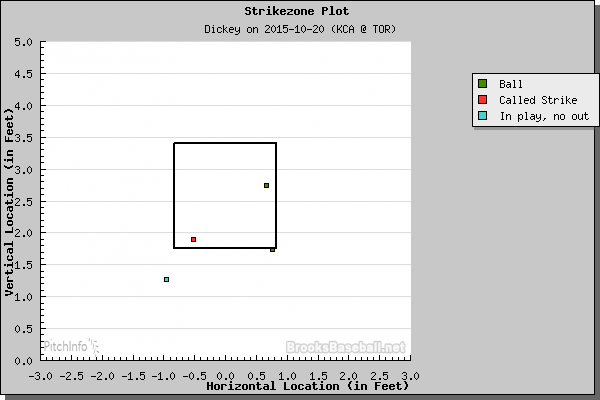 Hosmer was probably trying to pull the ball to the right side in order to advance Cain to third base. He did one better, however, by singling up the middle and setting up runners at the corners with nobody out. A passed ball later, the Royals would take a 3-0 lead with nobody out and a runner on second.

No. 3 The Run Manufacturer's Patent
With Hosmer on second base, the Royals orchestrated a sequence that undoubtedly caused two-thirds of the league's television analysts to nod in approval. Hosmer advanced to third base on Kendrys Morales' groundout to the right side, then scored on Mike Moustakas' fly out to center. Four-nothing.

The rest of the game was bereft of drama, save for the aforementioned points. There were a few other items worth noting. They were:

1) You knew things could get nutty in a game started by Dickey and Chris Young, and nutty they got. How nutty? Cliff Pennington and Franklin Morales pitched. Nutty!

2) On a serious note, Young did exactly what the Royals needed him to do by limiting the damage over most of five frames. Ned Yost was smart to turn the game over to the bullpen when he did, and Luke Hochevar, Ryan Madson, Kelvin Herrera and Morales would combine for 4 1/3 scoreless innings. This would be remembered as a brilliant, bold move had the game not turned into a race between a snail and a fighter jet; alas, nobody will care until Yost pulls the same stunt in a tighter game.

3) The Blue Jays had little go their way on either side of the ball, but man oh man did Liam Hendriks have himself a day. He picked off a runner to begin his 4 1/3-inning assignment, then allowed one baserunner over the ensuing four frames. For comparison, the rest of the Blue Jays' pen (including Pennington) allowed nine more hits and recorded four fewer outs than Hendriks did on his own. That's your silver lining, Toronto. Unfortunately, Hendriks won't be available to pitch in Game Five, which will take place on Wednesday afternoon.

The Royals are a win away from the World Series, and from making us all look like idiots. Again.

You need to be logged in to comment. Login or Subscribe
AexJohnson
Great Title. Thank you.
Reply to AexJohnson
lambchop1
Four pitches into the game, it was the Royals who had a 2-0 lead, not the Blue Jays.
Reply to lambchop1
lyricalkiller
Got it
Reply to lyricalkiller
magua11
I am in mourning...
Reply to magua11