After taking the first two games in New York, the Mets will try to take a commanding 3-0 lead in the NLCS while the Cubs will try to get back into the series with a win at Wrigley Field. Game Three features what looks like a pitching mismatch on paper, with Jacob deGrom (4.5 WARP) taking the hill for New York against Cubs’ hurler Kyle Hendricks (2.5 WARP). Despite the possible pitching gap, PECOTA favors the Cubs to win their first game of the series, but in order for that to happen Chicago’s heralded lineup is going to have to get back on track against yet another 95+ mph flamethrower.

Injury/Availability Notes: Both teams are without their starting shortstops for the NLCS. Addison Russell (hamstring) could be available if the Cubs advance to the World Series while Ruben Tejada (leg) is out until 2016. Although there has been some talk of flipping Duda and Conforto in the lineup, the Mets aren’t likely to mess with success and will probably roll with the same lineup in Game Three that they typically use against right-handers. Joe Maddon is generally more willing to fiddle with his batting order than Terry Collins is but he is likely to go with the alignment above, which is the Cubs' “typical” lineup against RHP of late (absent Russell). Chris Coghlan started on Sunday because of prior success against Noah Syndergaard but should be back on the bench. Tommy La Stella could start at second with Castro moving to short if Maddon wants to opt for another left-handed bat against the righty-killer deGrom.

Outlook: If there is a silver lining for the Cubs tonight, it is that the deGrom, who dominated the National League for the first four months of the regular season, struggled somewhat down the stretch, posting a 3.48 ERA from August 1st onward. He dominated against the Dodgers in Game One of the NLDS, then managed to push past a rough start to put up solid performance in the Game Five clincher. While deGrom showed that he can perform capably without his elite stuff, the Cubs lineup is more formidable than the Dodgers’ lineup is, and it could be a long night for the Mets if deGrom has difficulties with his command in the zone like he did last Thursday. DeGrom is slightly more mortal against left-handers, so Fowler, Rizzo, and Montero will all be key matchups to watch.

Hendricks twirled a six-inning masterpiece against the Mets at Citi Field on June 30th, but comparing the Mets' pre-deadline lineup to its post-deadline one is like comparing a Cezanne to your five-year-old’s scribblings. Hendricks will need to keep the Mets off balance with his off-speed stuff, particularly his bread-and-butter changeup. His results against the Cardinals in the NLDS were mixed, as he struck out seven but allowed three solo shots before being removed with two outs in the fifth inning. Maddon will ride Hendricks if he is performing, but with the specter of a 3-0 deficit looming, Maddon won’t be afraid to ride the bullpen early if Hendricks isn’t generating strikes and groundballs right out of the gate. – Mike Gianella

The Blue Jays hitters finally got back to doing Blue Jays hitter things in Game 3, knocking out Johnny Cueto as part of a six-run third inning. With the series now 2-1 in favor of Kansas City, both teams will send their No. 4 starters to the hill for Game 4 at the Rogers Centre.

Injuries/Availability: Here’s your daily reminder that Edwin Encarnacion and Salvador Perez were both nicked up in Game One, the former leaving that game with a left middle finger ligament sprain and the latter taking a backswing to his glove hand. Both have played in the two games since and will be ready to go in Game Four.

Kris Medlen was the only non-starter on either team to throw more than one inning in last night’s game, so with the exception of the two-time Tommy John survivor, expect all other relievers to be ready to go.

The storyline surrounding this pitching matchup has been how Chris Young, the game’s most extreme flyball pitcher, will fare pitching in the home run haven that is Rogers Centre. When you coax as many flyballs as the soft-throwing Young does, it’s nice to pitch half your games at Kaufmann Stadium, which happens to be home to the most spacious outfield in baseball. That said, Young can take some comfort in the success of a pitcher in the opposing dugout who has gotten by in Toronto this year with a flyball-heavy approach: Marco Estrada. Like Estrada, Young generates lots of weak contact and tons of popups. It’s certainly possible that the Royals starter surrenders some home runs in Game Four—these are the Blue Jays after all—but the home park is by no means instant death.

Another thing to consider about Young’s unusual profile is the type of hitters suiting up for the Blue Jays. We know the Blue Jays hit a lot of dingers and we also know that that flyball hitters do relatively worse against flyball pitchers. Collectively, the Blue Jays had a flyball rate only about one percentage point higher than the league average. As a team they leaned toward lifting the ball in the air but weren’t exactly at the extreme end of the spectrum. However, there were some exceptions.

Most notably, Jose Bautista and Edwin Encarnacion stand out as extreme flyball hitters who we might expect to be at a relative disadvantage against Young. The plan of attack for the Royals starter is fairly simple against right-handers. Elevate the fastball early 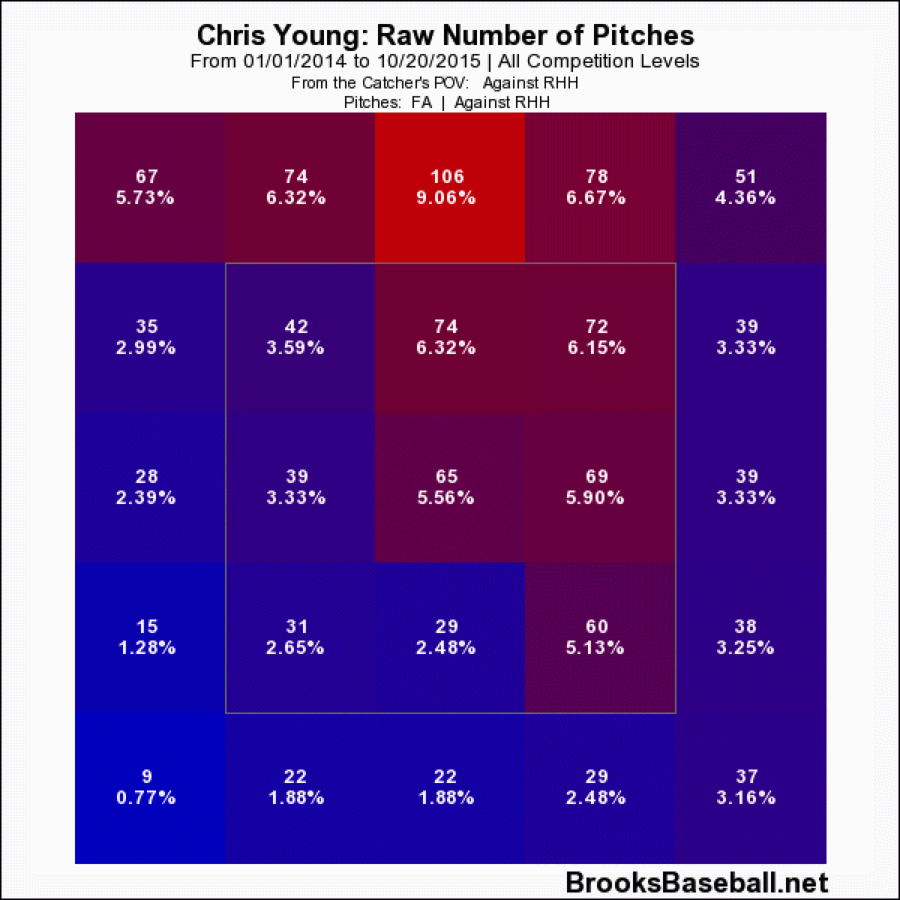 and then bury the slider once he’s ahead. 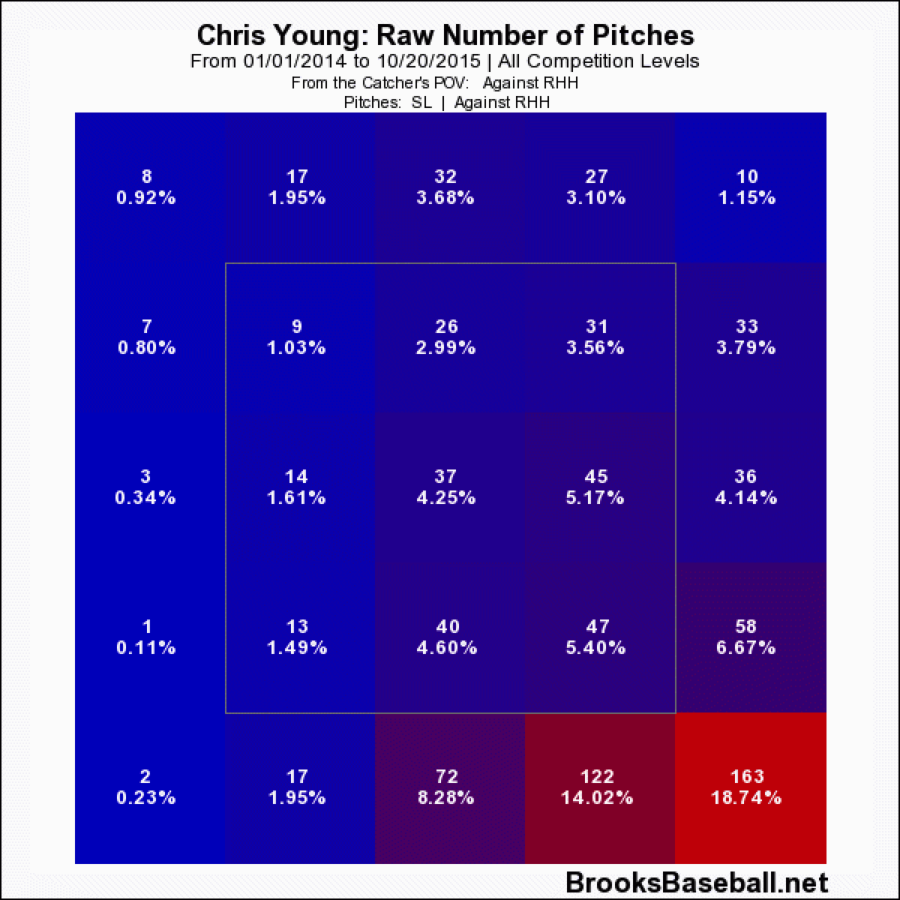 You’ll also notice that when Young does float his high-80s fastball over the plate, he tends to nibble away. Jeff Sullivan has covered how the trio of Bautista, Encarnacion and Josh Donaldson all terrorize pitches on the inside part of the plate, so Young would be wise to stick to his plan of painting the black. Going upstairs is also a place where Encarnacion can be exposed to fastballs, 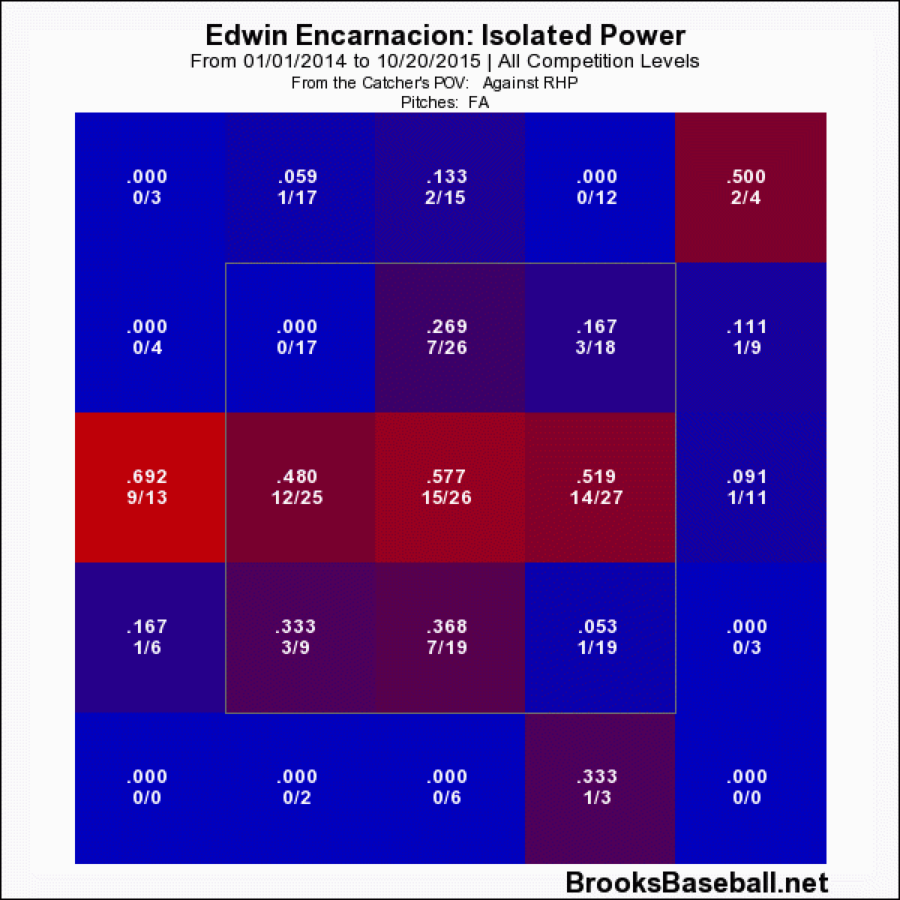 meaning that Young could match up well against him if he can hit his spots. On the other hand, Bautista can really mash fastballs at the letters. If Young plans on going upstairs against him, he better make sure he elevates out of the zone (where Bautista will expand). He might just be better off sticking with fastballs away and sliders out of the zone to Bautista.

On the other side, the Blue Jays will counter with R.A. Dickey, whose strong second half coincides with an uptick in velocity on his knuckleball. 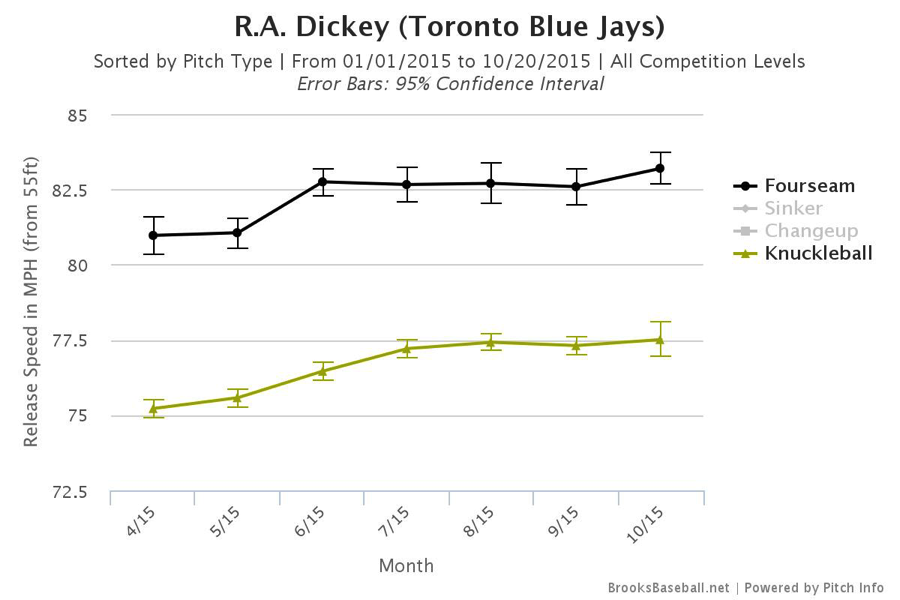 Our own George Bissell delved into Dickey’s return to relevance a month ago, noting that the knuckleballer himself has admitted before that he feels most comfortable throwing strikes when his primary pitch is sitting in the 76-77 mph range. That’s exactly the band it’s been in since around the All-Star break, after which he’s held opponents to a .619 OPS.

Unlike some of the previous pitching matchups in this series, this one will pit two pitchers who get by on guile and specialization rather than premium velocity. We most likely won’t see the radar gun start with a “9” until the teams get into their bullpens. Nevertheless, whether these two pitchers can craft their way past these offenses should make for an intriguing pitching matchup. It’s also one that could very well end up being another 11-8 game.

You need to be logged in to comment. Login or Subscribe
Natsfan820
Is there a reason that Schwarber is left off the list of key match ups to watch against deGrom? (I notice he's listed incorrectly as a RHB. Maybe a typo led to an omission?)
Reply to Natsfan820
MikeGianella
He should have been listed.
Reply to MikeGianella
sam19041
How exactly do you use PECOTA to make single-game odds / predictions? I thought it was a player-specific forecast system based primarily on regression analysis.
Reply to sam19041
MikeGianella
There is an internal tool that bumps against PECOTA that generates odds for individual games based on lineups, the starting pitchers, and each team's top three relievers.
Reply to MikeGianella
rry2222
As was the case with NLCS game 2, PECOTA's prediction differs from Vegas's, where the Mets are favored. Let's hope PECOTA is right again.
Reply to rry2222