After an series opener in which New York’s Dark Knight pitched his way back into Gotham’s good graces with 7 â…” strong innings against Chicago, the Cubs will counter with an ace of their own in Jake Arrieta. Toeing the rubber for the home team in the Big Apple? None other than Marvel’s answer to DC’s Batman: the young god Thor, bearing a hammer of a fastball and the locks of an angel.

Injuries/Availability:
Beyond the obvious missing players—Addison Russell for Chicago and Ruben Tejada for New York—everyone on both rosters should be pretty much good to go on Sunday. A possible exception? Jeurys Familia pitched two full innings in Game Five of the NLDS on Thursday night, and 1 â…“ on Saturday in Game One, so Terry Collins might go in a different direction if the game isn’t close on Sunday; that said, this is the playoffs, and both managers have a tendency to ride their hot hands when the going gets tough.

With respect to the Cubs’ lineup, it’s worth noting that there’s a chance Chris Coghlan gets the start in right field against Syndergaard over Jorge Soler—Coghlan has a homer and a walk against Syndergaard in three plate appearances—but Chicago’s stretched infield depth (see: Russell’s absence, above), combined with Soler’s recent hot spell, suggests that Joe Maddon will keep Coghlan, who can play second base in a pinch, in reserve on the pine in case he needs to double-switch late in the game. There’s also a chance Tommy La Stella starts at second base, likely pushing Starlin Castro to the bench.

As for the Mets, Terry Collins is likely to go with the lineup he’s used against righties late in the season: Michael Conforto comes into the game in left field, pushing Yoenis Cespedes to center and Juan Lagares to the dugout. On the infield, look for Lucas Duda to get the start over Michael Cuddyer: He’s hit .364/.533/.364 off of Arrieta in 15 career plate appearances, which gives him the eighth-highest OPS against the righty among players who’ve had any looks. (In the top seven on that list? Curtis Granderson.) A word of caution to Mets fans, though: Duda has been much less successful against Arrieta in 2015 than he had been before, whiffing in 50 percent of his plate appearances against the Cubs’ ace this year. If it’s any consolation to him, he’s far from the only player who’s suffered at the hands of our 20th President in 2015.

Outlook:
Reggie Jackson—who was nothing if not quotable—once said this of Nolan Ryan and his signature pitch: “Every hitter likes fastballs, just like everybody likes ice cream. But you don’t like it when someone’s stuffing it into you by the gallon.” Well, the Cubs like fastballs. But I’m not sure they’ll love them coming from Noah Syndergaard. He’s averaged just a hair under 98 miles per hour on his heaters this year (both the four-seam and sinking variety), and he pairs them with a dizzying range of secondary pitches: a changeup that sits around 89, a slider at 86, and a curve at 81. That’s not fun to face even on the hottest of July days, and in New York on Sunday, July will be but a distant memory: It’s projected to be 45 degrees at game time. That’s not ice cream weather.

The question mark for Syndergaard on Sunday, therefore, revolves less around his arsenal and pure stuff—which is not in question, at least here—and more on the tenderness (or not) of his right arm. In Game Five of the Mets’ NLDS against the Dodgers, Collins (wary, no doubt, of Jacob deGrom’s performance in the early going) got Syndergaard up in the bullpen no less than four times, estimating a day later that his young ace had thrown “over 100” pitches in the bullpen before finally getting into the game in the seventh. It didn’t matter that night—Syndergaard touched triple digits on occasion, and struck out two—but it’s fair to wonder how he felt the day after, and how long he’ll be able to go on Sunday.

If he is indeed ready to go in Game Two, expect him to take mirror-image approaches to the batters who’ll dig in against him. Against the four likely Cubs lefties, look for him to put the hard stuff away from the batters and the soft stuff in: 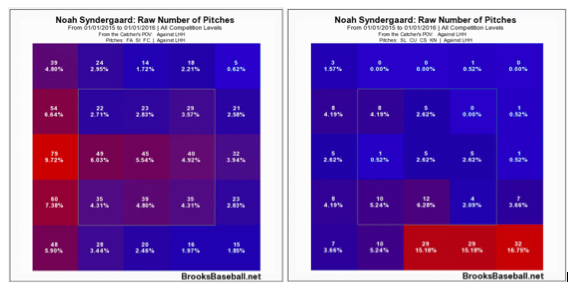 Against righties, it’s probably going to be a different story. When facing like-handed hitters this year, Syndergaard has largely gone with his fastball in the zone, or a little off the plate inside, and breaking stuff exclusively down and away: 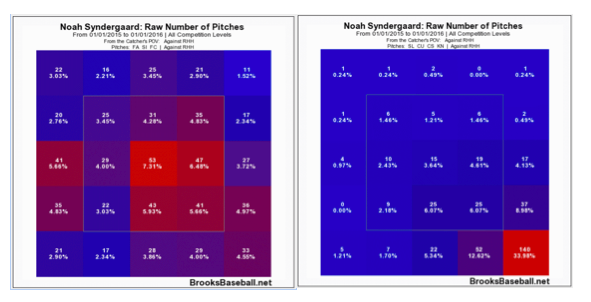 The Cubs are a patient team in the box (leading the league in pitches seen per plate appearance), and they’re unlikely to bite at the soft stuff outside the zone, preferring to wait for their pitch to drive. They’ll also do everything they can to work deep counts against Syndergaard and tire him out early, thereby getting to a Mets bullpen that’s looked solid of late but isn’t above occasional bouts of shakiness. That’s a strategy Chicago employed to great success against the young righty in his major league debut, forcing him out of that game in May with only one out in the fifth and 103 pitches already in the books. Syndergaard hasn’t faced the North Siders since.

The Mets, for their part, will try much the same approach against Arrieta. In his last start—against the Cardinals in Chicago—the Cubs ace allowed three runs for the first time since a June 16th start in Cleveland, and left before the final out of the sixth inning was recorded for the first time in nearly as long. With 243 â…” innings on his arm already in 2015, including the postseason so far, Arrieta’s already reached a total 54.5 percent higher than his career high-water mark of 156 â…”, set last year, and he may be tiring. My colleague Sahadev Sharma has argued on this site before that Arrieta’s body, more than most, can take that kind of stress, and (having seen him up close) I can believe that, but it’s hard not to look at a 50-plus-inning jump in usage and draw a line to any command struggles that may come up on Sunday against the Mets, and which did last week against the Cardinals.

If the Mets are successful in driving Arrieta out of the game early, look for Travis Wood to enter to force Terry Collins to his righty lineup, and give Joe Maddon a few solid innings before turning the game over to the late-inning boys: Trevor Cahill, Pedro Strop, and Hector Rondon. If Arrieta stays in the game late, or if the Mets blow the game wide open, expect Fernando Rodney or another of the Cubs less battle-tested relievers to give their manager a few innings and rest the big arms for Game Three in Chicago.

This series was billed as the Mets arms versus the Cubs bats. In Game One, that narrative delivered, as Matt Harvey outgunned the Young Cubs and pitched his team to a 1-0 lead. But the series was always going to be about more than that; defense, bullpen usage, and moment-by-moment matchups were expected to play key roles as well. Look for more of that in Game Two, as weary twin aces take the mound and attempt to pitch their teams to glory. They might last, but then again, they might not; in the latter case, the little moments will make all the difference.

PECOTA likes the Mets to take this game, and I agree. The Cubs bats didn’t look sharp last night, and they’ve struggled against velocity in the past. Unless Arrieta is very much on his game—and, again, I have my doubts that that’ll happen—this could be a game in which the Mets put up three or four against Arrieta and his successors, and that’s enough to get the job done. That’s not to say the Cubs couldn’t come out of New York with a series split, because they absolutely could. It’ll just take more than a little offensive energy to overcome the Mets’ Marvel.

You need to be logged in to comment. Login or Subscribe
rry2222
Interesting. Vegas appears to have a dramatically different view of the game, as you can win about 150 dollars for every 100 you risk on the Mets to win. I think most analysis of this game consists of "Arrieta is pitching."
Reply to rry2222
rianwatt
Agreed. I wouldn't be shocked if the Cubs won --- they're too good of a team for that --- but if I was betting I'd take the Mets.
Reply to rianwatt
oldbopper
I just don't see the Cubs doing much against Seaver, Koosman and Gentry.
Reply to oldbopper
quackman
The Cubs would have done fine if it wasn't for that %&*#ing black cat.
Reply to quackman
DAW0001
I will be interested to see the pitch f/x vs. Umpire balls and strikes for the postseason. It seems like the umps see a much wider strikezone than the machines, at least as shown on tv.
Reply to DAW0001
GBSimons
Marvel's answer to DC's Batman isn't Thor, it's Daredevil.
Reply to GBSimons