After Game One of the American League Championship Series, Matthew Trueblood wrote:

"We don’t want to admit the role of randomness (or at least, we don’t want to just chalk the outcomes of games up to it), and if we spend too much time on the players and too little on the managers, we can’t avoid talking about that randomness. Statistics have slayed the narrative that said there was a yawning gap between players in terms of clutchness."

Less than a day later, the concept of clutch was back under examination following the Royals' latest unlikely comeback. This one occurred in the seventh inning of Game Two against David Price, who had pitched like his best self over the first six frames, holding the Royals to a hit and no runs. The Royals then singled four times over the next 14 pitches, tying the game at three apiece. Before long, the Royals would tack on another pair, eventually notching a 6-3 victory—a result that leaves them two wins short of advancing to their second consecutive World Series.

The Royals have made a habit out of coming from behind these past two Octobers. Ned Yost's bunch has played in 22 playoff games and won 16 of them, including Saturday's 6-3 win over Toronto. Of those 16 wins, the Royals have trailed at some point or another in half of them. In six of those eight, they've held a win expectancy of 35 percent or less. In three of those six, their win expectancy has dipped into single digits. Basically, 19 percent of the Royals' postseason wins have been of the miraculous comeback variety. How do you explain that without talking about clutch and the like? You can't.

Logically, we know Trueblood is correct about randomness in the postseason. The Royals are, in all likelihood, simply riding a streak of grand luck. They're making the most of it, too. In the ALCS alone, Yost has succeeded with a pair of silly heat checks: first leaving in Edinson Volquez longer than he should have in Game One, then, in Game Two, calling for a hit-and-run (or run-and-hit) with his first baseman and designated hitter. Yost doesn't even like to hit-and-run—the Royals finished the season with the third fewest in the American League—but when you're hot, you may as well shoot your shot.

So of course luck or randomness or sequencing or whatever you call it has played a role in the Royals' come-from-behind success. Nonetheless, the more Yost and the Royals overcome long odds, the more you have to wonder: Is there something else there—have they cracked the clutch code?

Statistically, you'd say probably not. True, the Royals posted the majors' highest regular-season batting average in high-leverage situations; however, their OPS was just third in the majors and second in the AL, behind their ALCS opponent. Alas, the Blue Jays had the best regular-season offense in baseball, so you'd expect them to be the best in high-leverage spots as well. To control for that variable, Baseball-Reference tracks a statistic called tOPS+; its purpose is to tell us how a team performed better in a split relative to their overall numbers. Sure enough, the Royals did hit better in high-leverage spots than the Blue Jays did to their overall numbers, but they tied for second . . . with the Rockies. The Cubs, meanwhile, led the majors, meaning the Royals are, at best, the second most-clutch playoff team.

That data is enough for many to put the subject to rest. In spite of that, those willing to think abstractly will find Ken Arneson's hypothesis about the hidden October value of the bad-ball hitter worth their time:

But there are times, against a good pitcher on a good day who is simply not giving hitters a good pitch to hit, that it is valuable to have a player who often does damage even with a bad pitch to hit. And those times happen more often in the playoffs.

Arneson admits his belief is faith-based, which means its mileage varies by person. Yet he probably formed the notion after watching an inning similar to the one the Royals had against Price: 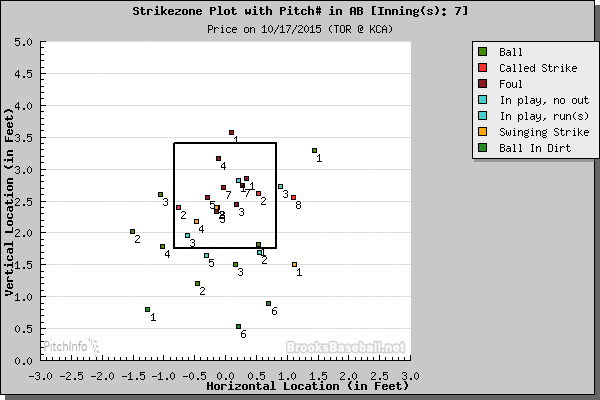 There are supposed to be six blue boxes there, but one is hidden beneath a few others. Of those six, only one pitch was located up and over the plate. Three others were outside the strike zone, while the rest were in neutral or pitcher-friendly locations. The count matters as well, so note that the Royals put two balls in play on 1-1 and one each on 0-0, 0-1, 2-2, and 3-2. Although there's no extreme, Pablo Sandoval-like example to point to or anything, the Royals' rally was almost the embodiment of Arneson's pet theory.

That doesn't mean the Royals have cracked the clutch code or anything of that nature; this is only a single data point and it's unclear that the Royals even assembled their roster with this stuff in mind—mostly because there's no way of knowing either way. But the more often the Royals make mincemeat out of win probability, the more open-minded we'll become toward explanations beyond randomness and good fortune—including those that are esoteric, or heretofore without quantitative backing.

All win expectancy data courtesy of Baseball-Reference and FanGraphs.

You need to be logged in to comment. Login or Subscribe
jfranco77
Wouldn't you be able to test this in the regular season? Post-season David Price isn't THAT different than regular season David Price, is he? Which batters hit best against Price in the regular season? Do you see unusual success from bad ball hitters?
Reply to jfranco77
timber
Yost didn't call for a hit-and-run, nor for a run-and-hit. Rusty Kuntz is ALWAYS in charge of when Royals baserunners take off. This did not come from Yost. The decision to send Hosmer came from him.

Here's a discussion of the play: