Here’s the thing: You usually never want to lean too heavily on clichés. You wouldn’t say, “Daniel Murphy single-handedly beat the Dodgers in Game Five” just because he had a part in all the runs the Mets scored in their 3-2 win. We know that’s not completely true.

After all, Curtis Granderson had to get on base for Murphy’s first-inning RBI double to mean something. The same can be said for Lucas Duda’s walk in the fourth inning, which gave Murphy the opportunity to go first to third against a Dodgers infield that fell asleep. Then there’s Travis d’Arnaud, who lifted the sac fly that allowed Murphy to come home to tie the game moments later. That’s all before even taking into account the performance of Jacob deGrom, who battled through six innings without having anything close to his best stuff.

But what we can say is that Murphy was the only Mets player who was able to consistently put together quality at-bats against Zack Greinke, who was otherwise utterly dominant throughout his 6 2/3. Besides Murphy—whose solo homer was the deciding run—the only loud contact the Mets made the entire night was in the second, when Michael Conforto ripped a fly ball into the right field corner that found the glove of a diving Andre Ethier. And even that reached an exit velocity of just 86 mph.

Greinke gave up six hits, three of which were to Murphy. Two more stayed in the infield. One was the first-inning dribbler hit so softly into the shift by Granderson that he was able to leg it out for an infield single. Kelly Johnson hit the other to second base, where Howie Kendrick muffed the backhand play. Immediately before Johnson’s infield single (the last batter Greinke would face), Wilmer Flores flipped a soft single up the middle (80 mph exit velocity) that landed just in front of the outfield grass. That’s it. Those were the six hits off Greinke.

Yoenis Cespedes swung through three straight heaters in the first, then spent the rest of the night flailing at sliders out of the strike zone. David Wright struck out in his first two trips to the plate and then hit a lazy fly into shallow right. Lucas Duda worked deep counts all three times but couldn’t touch the changeup and sandwiched his walk in the fourth inning between a pair of strikeouts.

Greinke, known for his meticulous approach on the mound, had a clear plan of attack against Murphy. He went strictly fastball-changeup against the Mets’ second baseman, and of the 10 pitches he threw to him, catcher Yasmani Grandal set up low and away on eight. 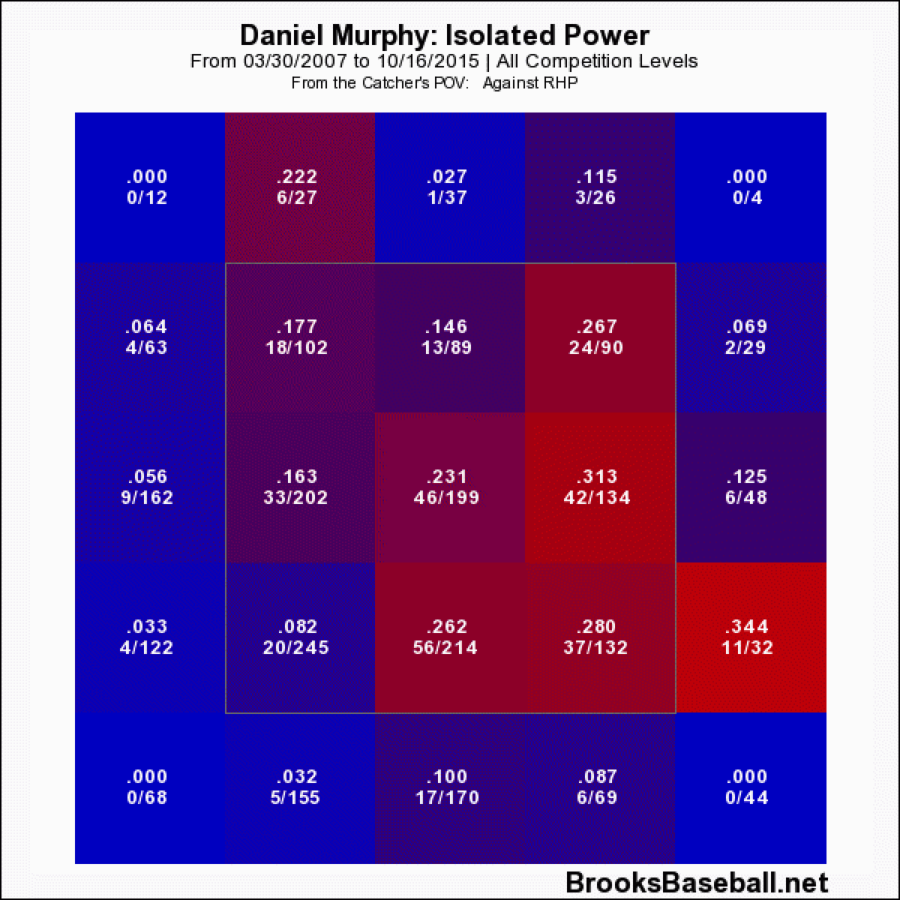 Greinke missed just off the outer part of the plate with two fastballs against Murphy in their first meeting to fall behind 2-0. Unwilling to give into Murphy in a hitter’s count, Greinke went back to the outer third, this time with his changeup, and Murphy took it the other way for a double (he advanced to third on an error by Kike Hernandez).

The next time up, Greinke started Murphy off with another changeup off the plate. He basically put it right where he wanted it. Yet Murphy jumped on the pitch and ripped it through the right side for a leadoff single. Putting the bat to the ball is something Murphy has a knack for, as he boasted the lowest strikeout rate among qualified hitters this season. Couple that with a line-drive swing that sprays the ball to all fields and you’ve got fuel for “professional hitter” clichés.

But what happened next was something less characteristic of Murphy: heads up baserunning. He did swipe 23 bases two seasons ago, but he often exhibits the type of recklessness and poor decision making on the bases leaves Mets fans groaning “Oh, Murph.” Not this time.

With one out in the inning, Lucas Duda drew the only walk of the game against Greinke. While trotting down to second base, Murphy realized that the shift had left the Dodgers with not a single fielder on the left side of the infield. He calmly touched second, then Murphy took off in a sprint and slid into third base.

That extra base proved to be pivotal, with Murphy coming home to score the tying run moments later on a sacrifice fly by Travis d’Arnaud. The argument could certainly be made that Andre Ethier, who ran down d’Arnaud’s fly ball in foul territory, would have been better off letting the ball drop foul. Doing so would have put d’Arnaud in a 0-2 hole and given Greinke a chance to get a much-needed strikeout or even a potential double play ball. ESPN’s Dan Syzmborski estimated that Ethier’s decision to catch the fly ball instead of letting it drop increased the Mets’ win probability by approximately seven percentage points.

Obviously, it’s easy to second-guess the decision in hindsight; it’s harder than it looks for an outfielder to gauge where he is relative to the foul line while also worrying about catching the ball and not crashing into a wall. However, trading a run for an out in that situation might not have been the wisest choice.

Undeterred by Murphy’s two hits off the changeup, Greinke went back to the pitch to start the third at-bat. Low for ball one. He followed by going inside for the first time all night and just missed the inside corner with a fastball. Ball two. Murphy was taking all the way with the count 2-0 and Greinke got away with a changeup right down the middle. The next changeup missed the outer corner by the slimmest of margins to run the count to 3-1.

It was at this point that Greinke switched things up. Despite having nobody on and pitching to Murphy from the windup for the first four pitches, he starting pitching from the stretch. This wasn’t the first time Greinke had done this during the game. Back in the first inning, he went out of the windup against Lucas Duda for the first four pitches of the at-bat before switching to the stretch with a 3-1 count. He would strike Duda out on back-to-back changeups.

(Murphy was on third throughout the Duda at bat, so this might have had to do with the Dodgers having a fielder somewhat close to the line early in the count to protect against the bunt to beat the shift. The broadcast never showed the infield alignment once Greinke went to the stretch, but it’s conceivable that he did so only once there was nobody to keep Murphy close at third.)

Maybe this was a way for Greinke to give Murphy a different look. It’s hard to tell. Murphy had hit Greinke hard in each of his two previous at-bats, and the pitcher was getting squeezed in the current showdown. Nevertheless, Greinke’s 3-1 offering from the stretch was yet another changeup, his fourth of the AB and seventh of the night to Murphy, who yanked it foul. The pitcher went back to his fastball on the payoff pitch, one of the few time he tried to front door Murphy. The second baseman had already had himself quite the series, launching home runs off Kershaw in Games One and Four, but it was this swing and nonchalant drop of the bat that will forever be replayed on Mets highlight packages.

Murphy’s heroics will certainly garner headlines, and deservedly so, but Jacob deGrom also turned in a performance that elicited this compliment from his pitching coach.

It was clear from the outset that deGrom took the mound devoid of his best stuff; his velocity was down half a tick from his dominating performance in Game One and he had trouble commanding his fastball throughout the game.

The concern level regarding deGrom grew to the point that Terry Collins had Noah Syndergaard get loose in the bullpen on three separate occasions during the first five innings—the labor of which likely played a role in the Mets skipper opting for closer Jeurys Familia in the eighth instead of Syndergaard, who had eventually come in and dominated in the seventh.

But the Mets ace rewarded Collins for trusting him by weaving in and out of trouble after a rocky first inning that resulted in the Dodgers’ only two runs of the game. Without his usual fastball command, deGrom leaned heavily on his array of secondary pitches to navigate through the Dodgers lineup for a third time. Here’s a look at his pitch usage the first, second and third times through the order during the regular season, in Game One against Los Angeles and in Game Five.

The Dodgers had numerous chances to break the game open early against deGrom, who threw 57 of his 105 pitches with runners in scoring position. But once deGrom got through six innings the Mets were in control. Syndergaard hit triple digits and Jeurys Familia needed just 21 pitches to send the six Dodgers he faced down in order.

The Mets closer even wrapped up the ongoing saga with Chase Utley (for now) by getting the Most Hated Man In New York to fly out to right field to lead off the ninth. After recording the final out, Familia jumped up and down with the type of elation a child might show after his parents tell him they’re going to Disneyland. The celebration wasn’t quite Jesse Orosco circa 1986, but with a spot now secured in the NLCS, this Mets squad is one step closer to creating their own such moment.

You need to be logged in to comment. Login or Subscribe
fbraconi
I'm wondering about the 9th inning strategy with Familia at bat, 2 on and 2 out. Why not send the runners on a double-steal? There would be more chance of an error on a throw to a base than of Familia getting a hit off Jansen. If the Dodgers don't throw, with runners on 2nd and 3rd you increase the pressure on the defense just in case Familia puts the bat on the ball, and creates an opportunity to score a run on a passed ball or wild pitch, or for that matter a steal of home. If either of the runners gets thrown out, so what? You're conceding the at bat and scoring opportunity anyway. As it turns out, the Mets hung on, but it seemed to me like a squandered opportunity to try to create an insurance run with a downside risk close to zero.
Reply to fbraconi
rweiler
I wondered about brining Famillia in early. Syndergaard had no problem at all getting 3 guys out, 2 of them on K's, and he had only thrown 17 pitches. If he goes out to pitch the 8th and his turn to bat comes up in the top of the 9th, they would pinch hit for him anyway and Familia would pitch the 9th. It all worked out as Familia got his 6 outs, but there was a lot more hard contact off him then there was on Syndergaard.
Reply to rweiler
ArseneLupinIII
"TTTO (Game 1)" is listed twice. The first should read "TTTO (Regular Season)"
Reply to ArseneLupinIII
cmosch
Fixed. Thanks!
Reply to cmosch