I expected to be writing this piece about a slightly different matchup, but then the Jays decided to go with David Price in the fifth inning of a 7-1 ballgame, left him in for 50 pitches, and effectively bumped him out of the running for today's ballgame. The decision was perplexing to say the least, and though you have to give manager John Gibbons some benefit of the doubt for knowing his players better than the rest of us do, one has to wonder. Perhaps Gibbons didn't trust Price to start Game Five and preferred Marcus Stroman, but if that's the case then it raises serious doubts about Toronto's rotation should the Jays advance to the next round.

Instead we get a rematch of Game Two, with Stroman going up against Cole Hamels. The two pitchers surrendered six runs between them in the first two innings, though both settled down to go seven strong in a game that was ultimately decided after 14 innings. Baseball fans everywhere can only hope that today's matchup comes close to that level of drama, in a contest between two pitchers who were not in these teams' rotations just three months ago.

Hamels limited Toronto to two earned runs but four total tallies across seven frames in Game Two, a pretty impressive accomplishment considering the Jays' juggernaut had ripped southpaws to the tune of a .278/.354/.463 slash this season. For his part, Hamels has had a neutral platoon split for his career, with just an eight-point difference in OPS depending on the handedness of the opposing batter—with lefties, not righties, drawing that small edge.

The southpaw has been astonishingly consistent throughout his career, keeping opponents off the basepaths with a WHIP that has topped 1.20 just twice in his 10-year tenure – in 2009 and in his rookie year of 2006. He had a 3.64 ERA with the Phils (20 starts) and a 3.66 ERA with Texas (12 starts), further cementing the predictability factor for the left-hander. His 2015 walk rate was higher than in all but two seasons—in 2010 and his rook year—but on the plus, his K rate is up there with his best seasons and was his fourth campaign above 24 percent. Hamels has allowed the Rangers to roll with some veteran savvy while the rest of the rotation is falling apart at the seams, with nominal ace Yu Darvish forced to watch from his rehab.

Stroman was a serious breakout candidate in the preseason, but his season was seemingly ended before it really got started, as the second-year pitcher busted an ACL in spring training and was presumed out for the year. He came back faster than expected, went 4-0 in four starts down the stretch and suddenly finds himself as the man on the mound to determine whether the Jays advance. The first couple frames of Game Two involved a mix of weak contact and shoddy defense that allowed the Rangers to plate three baserunners (though he was spared additional damage in the first inning thanks to a weird unassisted double play by Chris Colabello), but Stroman calmed things down thereafter, with just one more run allowed over the next five innings of work.

One might expect the young right-hander to take some time to get everything ironed out given the late start to his season, and it's typical for such pitchers to focus on power in lieu of stability when lacking their usual baselines of physical preparation. Such a strategy would typically result in a high walk rate and an escalated frequency of homers (due to lack of pitch command), but Stroman has demonstrated nearly identical rates in both departments. The only real downturn in his numbers comes from a K rate that is more than three percentage points off of his strikeout pace of last season. Sample size caveats abound, and it is far too early to draw any real conclusions; the bottom line is that he has been effective while the Jays have stretched him out to 95 or more pitches in his recent starts, while his pitch-count efficiency has allowed him to throw seven or more innings in four of his five turns this season (playoffs included).

Hamels has a very cool pattern of velocity, one that defies all expectations, as everything is on an upward trend from the standpoint of pitch-speed. His velo has improved every month this season, including his average October velo of 94.5 mph (according to Brooks), and in fact Hamels has upped his in-season pitch speeds throughout his career—check out the following chart: 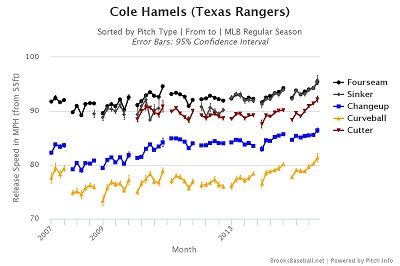 It's no secret that pitchers tend to lose velocity as they age, and typically they must hone pitch command in order to compensate for the seemingly inevitable loss of stuff, but Hamels is bucking all trends with a velo that has not only held firm but is actually improving over time. The increase has been most obvious over the past two seasons, an aspect which can be especially dangerous with a pitcher who possesses both a killer cambio and the knowledge of effective velocity to exploit those speed changes. His bread-and-butter changeup has continued to be elite, claiming responsible for the most strikeouts in his repertoire for the fifth consecutive season, but his curve has become nearly as devastating and his cutter been pretty sick, as well. It's the breadth of his arsenal that is so devastating, and the fact that his stuff just keeps getting better is something that AL batters now have to contend with on a regular basis.

Stroman's velocity is down more than a full tick since last season, and though one can certainly excuse such a dip from a pitcher who sat out the season while rehabbing his lower half (thus lacking his usual prep)—so the pitch-speed is not yet a long-term concern—the current reality is that he's not throwing quite as hard as he was during his rookie year. He's relied much more heavily on the sinker this season compared to the four-seam fastball—the split was 35.9-percent four-seamers and 18.3-percent sinkers in 2014—but the movement on his two-seamer has been absolutely devastating. The arm-side run that he invokes on that pitch, along with his command of that run, has resulted in some confused looks from opposing batters. He off-sets the fastball variations with three different variations of pitches that break away from right-handed bats—the cutter, slider and curve—while he keeps el cambio in his back pocket until a dangerous lefty strides to the plate.

I'm admittedly biased when assessing the mechanics of Hamels, as the San Diego native has a long history of working with Tom House, and in the interest of full disclosure I have to point out that Cole graced the cover of and wrote the foreword to our book. So yeah, I better like his delivery. He receives plus marks across the board, which is unsurprising given that he has been well versed in the dimensions that I evaluate for the mechanics report card. The biggest vulnerability is balance, as he has a bit of drop to his delivery that hurts the balance in the Y-plane (up-down) and he has battled the Z-plane (rubber to plate) at times this season, with a tendency to finish too far out in front. That said, these are relative nitpicks, and his stability culminates in plus posture that peaks at a 65 grade when everything is right.

Hamels does all of the little things to help extend his release point in order to aid deception. The plus posture works in conjunction with a solid glove-side to help him reach full extension, while the plus momentum and consistent timing provide a high baseline for his release distance. Hamels has maintained a grade of B or higher for his overall mechanics throughout his career, and he is well aware of not only when something is misfiring, but also the reasons why those mechanics might be out of whack.

I have no biases to explain the generous grades for Stroman—he's just that good. The balance represents an improvement over last season's grade, despite the fact that one would expect a dent to his stability in light of his rehab, and his posture has also flashed a 60-grade on some pitches. His ability to maintain a solid head position through the high-octane phases of his delivery is pretty remarkable considering his combination of youth, size and power.

Stroman's high grade for momentum comes from a combination of sheer power and excellent efficiency, with solid speed down the mound, which he keeps on a straight line to the plate, finishing with a follow-through the carries him an additional step toward the batter. I gave him a 65 grade for momentum last season and he has flashed the same mark this year, though not with the consistency to cement the grade for 2015. He has been repeating the timing and positioning of his delivery remarkably well for any young pitcher, and especially one who missed most of the season and is still theoretically rounding into top physical form.

You need to be logged in to comment. Login or Subscribe
ErikBFlom
I would think that imbalance could lead to a knee injury, either on the drive leg during the pitch, or the front leg during an uneven landing. So rehab could have addressed the stability problem that you are not seeing any more. Either that, or the dodgy knee was the source of the stability problem and now that it is rehabbed it is not.
Reply to ErikBFlom