The plan all along was for this Cubs team to be built on offense. After clinching a trip to the club’s first NLCS in a dozen years, team president Theo Epstein discussed how he and his staff once envisioned these bats all coming together and leading this group to great places.

“We’d write out the lineups on a cocktail napkin at 2 a.m. in some (crappy) hotel bar thinking where we might get these guys in the draft,” Epstein reminisced while celebrating with his team after a 6-4 victory over the St. Louis Cardinals. “Then we get them and we put them up on the white board in the board room and start to get pretty excited. Then in spring training you see them play together for the first time and you start to get really excited. Then the regular season happens and we take off. Now you see those guys playing together and beating the Cardinals in the Division Series. It’s just insanity.”

Epstein’s on point: This is all insanity. Javier Baez taking a John Lackey two-seam fastball on the outer edge of plate the other way for a three-run homer in a big second inning. Kyle Schwarber launching a Kevin Siegrist four-seamer over the right-field video board. For the second evening in a row, the offense put on a show with the long ball and will get the headlines, but as general manager Jed Hoyer told me, they weren’t alone in this one.

Bullpens are always an interesting study, but the group used by the Cubs on Tuesday afternoon was quite the eclectic collection. First came Justin Grimm, who was acquired from Texas two summers ago when the Cubs sent Matt Garza south. Many believed that manager Joe Maddon would have a quick hook with starter Jason Hammel, and after he walked the leadoff man in the fourth, the Cubs skipper walked to the mound and called for Grimm.

The righty had been lights-out for much of the season for the North Siders, but couldn’t get things going down the stretch, giving up six runs and walking 12 in his final 11 1/3 innings of work. If you spent any time talking to Grimm during that down period, you knew it was taking a toll on him mentally. When he came into this game, he immediately induced what appeared to be an easy groundball out, only to see third baseman Kris Bryant fail to make the play, likely thinking two and ending up getting none.

But instead of folding under the pressure of a game the Cubs had just grabbed a two-run lead in, Grimm responded by striking out the next three batters and handing the keys back over to the offense.

“I think it was more trusting my stuff and staying within myself,” Grimm said about the difference between the final month of the season and Tuesday’s outing. “I just beat myself over the past three weeks of the season. That was the biggest thing, I was going to make sure that didn’t happen. Honestly, just watching these guys out of the bullpen helped me a lot. When my name didn’t get called, it hurt a little bit to be honest with you. But to just watch these guys attack the zone like they did, you learn a little something. Wood and Cahill, they’ve been unbelievable.”

Grimm was referring to Travis Wood and Trevor Cahill, who followed him in what turned out to be a seven-man parade of bullpen arms. Wood started the year in the rotation, only to lose his job seven starts into the season. Instead of sulking about a lost role, Wood stepped up out of the ‘pen, tossing 58 innings with a 2.95 ERA and 30.2 percent strikeout rate. Cahill was released by the Braves in June and signed to a minor-league deal by the Cubs in mid-August.

Cahill didn’t have his best outing on Tuesday, giving up two runs and allowing the Cardinals to tie the game at four—Hoyer didn’t think Cahill was all that bad: “A little BABIP right there,” he said of the few hits the reliever gave up—but he did vulture a win after Anthony Rizzo and Schwarber sent a few balls into and over the right-field bleachers. Cahill’s performance with the Cubs leading up to this game was nothing short of brilliant. By largely ditching his cutter and going with a combination of his sinker, curveball, and changeup, Cahill was able to strike out 22 batters and give up just four runs in his 17 innings of work for the Cubs in September, earning himself a spot on the postseason roster. 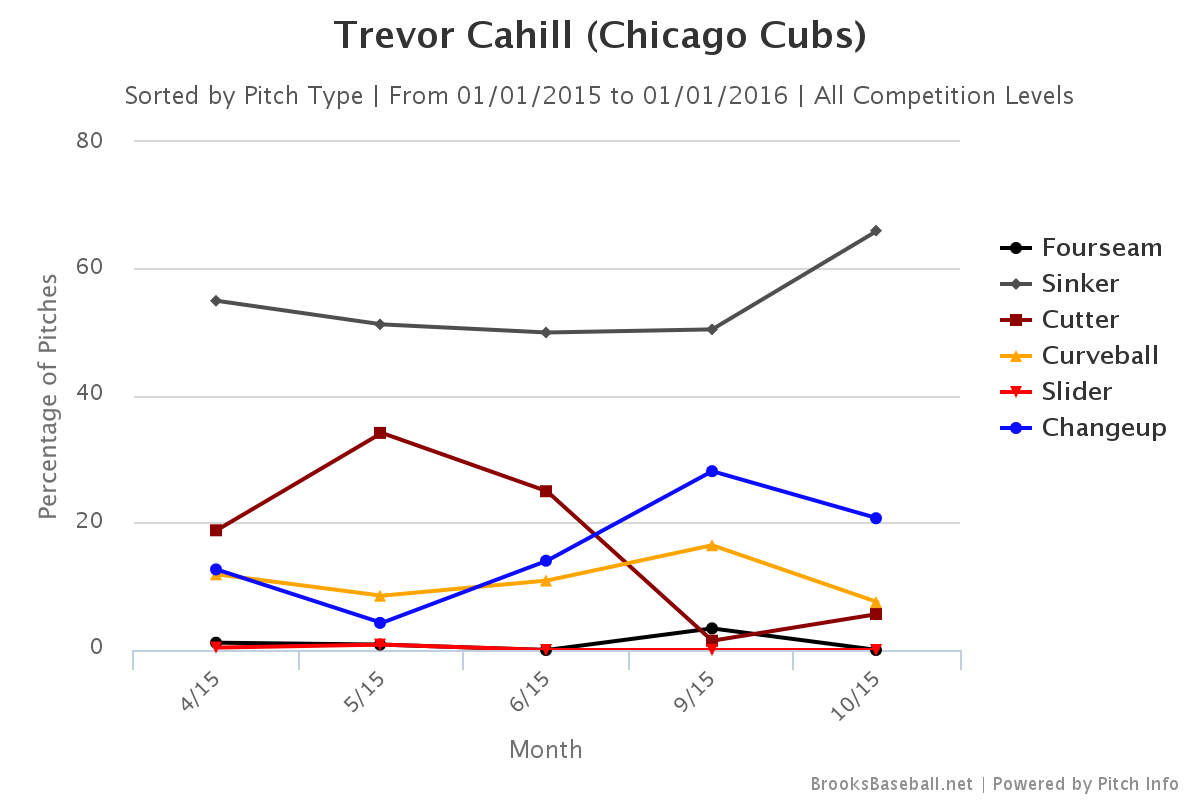 Cubs catcher Miguel Montero caught Cahill when he was really strong with the Arizona Diamondbacks, as well as when he was struggling mightily.

“He was probably—[mentally], he lost it a little bit, and he probably didn't have anybody helping him, behind him,” Montero said. “And then he came here, and as soon as he came here, I sat down with him and I said, you know what, I heard you were changing your delivery in Arizona in Spring Training, I heard they changed your arm angle and whatnot, blah blah blah. I want you to be you. Just go out there and throw the ball. Just be you and don't worry about the rest. I mean, he's been impressive, man. He's probably been as good as I’ve ever seen him.”

Cahill has gone from spiking fastballs in the dirt and a walk rate above 10 percent, to looking dominant out of the ‘pen.

“He was a pretty good acquisition by the organization in late August,” Montero said. “I was really happy when we signed him. I actually remember texting somebody in the front office saying, hey, that was a great sign.”

After Cahill came Fernando Rodney for two outs. Rodney had struggled as the closer in Seattle the last two seasons, eventually getting designated for assignment and then traded to the Cubs in August. As many in this story, Rodney has thrived during his small sampling in Chicago, allowing just one run in his 12 innings of work leading up to the playoffs. Rodney was followed by Clayton Richard—who hadn’t appeared in the bigs since 2013 and was acquired from the Pirates in early July to make a spot start—who calmly retired the hot-hitting Jason Heyward via strikeout. Pedro Strop—acquired along with Jake Arrieta two seasons ago—and former Rule 5 pick Hector Rondon closed things out for the Cubs while allowing just one baserunner in the final two frames.

It was truly a mish-mosh of bullpen arms that managed to get things done for six innings and help take the Cubs to the NLCS.

“Listen, I have a lot of confidence and faith in all our guys” Maddon said. “It does say a lot, the fact that you have sometimes look underneath some stones, you have to turn them over and see what's underneath there. You have to research a little bit more deeply and find out. Our group is very thorough to say the least, and like I said before the game today, talking about our scouting department, professional, free agent and also the player development is outstanding. I got to see it in spring training. The entire group is really outstanding.”

It’s not the typical way to build a ‘pen, but the Cubs have managed to piece it all together and make it work. As Hoyer told me, you’d prefer to build a relief core through your farm system, but sometimes you just have to rely on your pro scouts to do their job and find those who slip through the cracks.

“Building a bullpen is not sexy at all and tonight those guys came up really big for us,” Hoyer said.

Pitching coach Chris Bosio credited the players themselves for putting in the work and being selfless enough to fill whatever role was asked of them. However he also pointed to a front office that doesn’t always look at things like other organizations would.

“They’re creative, they think outside the box,” Bosio said. “You’re picking up three starters that are in our bullpen now. Most organizations wouldn’t do that or would say they just don’t have enough room for them because they don’t have enough starting spots. We’ve had a lot of success taking starters and sticking them in the pen. There’s comfort and familiarity when you have those guys down there and there’s a lot of experience which always helps in the postseason.”

If the Cubs are going to get through the NLCS and into their first World Series in 70 years, it’s going to be on the backs of Arrieta, Jon Lester, and the big bats in the lineup. But on Tuesday, a few role players, many of whom were given up on or never given a chance by others, helped pave the way to the biggest celebration Wrigleyville has seen in a long while. It’s only fitting for a team not many believed would still be rolling in the middle of October.

You need to be logged in to comment. Login or Subscribe
lipitorkid
1. I miss the Tater Tot Times: I always enjoyed seeing those.
2. This post is sadly lacking in HR GIFs or Vids. They were a thing of beauty tonight.
Reply to lipitorkid
NYYanks826
Yeah, we need some "Lackey Face" GIFs. He was absolutely fuming during that second inning.
Reply to NYYanks826
GBSimons
This article probably was written at 2:00 a.m. in the bowels of Wrigley, so a lack of GIFs is understandable.

It might even excuse why Sahadev refers to Cahill's use of his four-seamer when the graph shows he instead relies heavily on his sinker.
Reply to GBSimons
sahadev22
Fixed, thanks for the correction. Not written at 2 am, but my brain kind of feels like it. Been a hectic week covering this team...
Reply to sahadev22
morro089
I saw it posted by at least 11:30pm central
Reply to morro089
Jens521
Hammel was lifted in the 4th.
Reply to Jens521