After a Game Three in which the Cubs hit six home runs—beating the Cardinals 8-6, and setting a major-league record for home runs in a postseason game in the process—they’ll be right back at it this afternoon as they try to punch their ticket to the NLCS for the first time since 2003.

Injuries/Availability: Both teams will likely be without key players on Tuesday. Yadier Molina was removed from the game in the sixth inning after aggravating his injured left thumb. After the game, manager Mike Matheny didn’t say that Molina was out of the game for good, but the prognosis sure wasn’t positive. The Cubs, for their part, saw Addison Russell removed in the fourth inning with “tightness” in the left hamstring. Joe Maddon said postgame that he was “absolutely uncertain” about Russell’s status. He’ll undergo tests this morning.

For now, expect to see Tony Cruz catching for the Cardinals, and Javier Baez playing shortstop for the Cubs. As far as the relievers go, everything is on the table, especially for the Redbirds as they fight for their lives. Maddon said after the game that he was ready to empty the bullpen if necessary, and Matheny, facing elimination, will no doubt do the same.

Outlook: Neither lineup is a sure thing, as the injuries noted above might cause both teams to rethink their plans, but they should be pretty close. There’s a chance Tommy Pham might get the start in the outfield, pushing Piscotty to first base and Moss to the bench. Likewise, with the Cubs, there’s a chance Maddon goes to Chris Coghlan (as he did on Friday against Lackey), but I think it’s more likely that Jorge Soler gets the start in right, with Schwarber in left and Fowler—as always—in center.

Two questions will dominate tomorrow’s game. First, can John Lackey repeat his performance from Game One against the Cubs? He was brilliant then, striking out five over 7 â…“ shutout innings and relying heavily on his four-seamer and sinker to set up a slider that had, at 86.3 mph, its highest velocity of the season. Lackey also benefited from a pitcher-friendly zone, especially against right-handers, from home-plate umpire Phil Cuzzi: 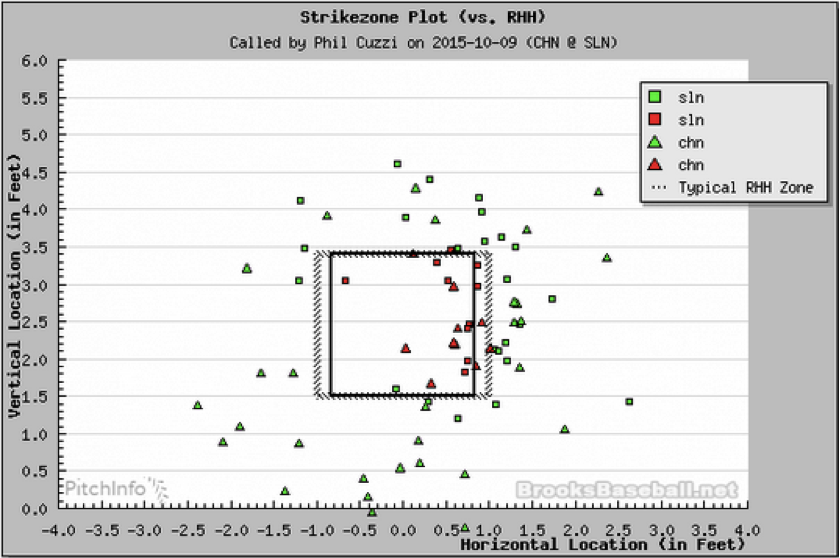 Cuzzi won’t be behind the plate on Tuesday, and at least one of the Cubs’ right-handers—Kris Bryant—didn’t seem too worried about facing Lackey again in postgame comments Monday:

“Yeah, he had a good game against us… but we’re all excited for the game. Hopefully we have a chance to win the game at home; obviously it would be nice to do that for the fans here.”

Bryant should, perhaps, be worried about Cubs’ starter Jason Hammel. In the second half this year, Hammel had a 5.10 ERA over 67 innings pitched, and manager Joe Maddon has kept a tight leash on his performance as he’s struggled down the stretch. Look for him to go until the first sign of trouble, and then for a long outing from Travis Wood, who’s been excellent lately out of the Chicago ‘pen.

PECOTA loves the Cubs’ odds in this game. That’s a product of the power of their lineup, sure, but also about the weakness of the Cardinals’. Cruz coming in for Molina is a big dropoff in performance—he had a TAv of just .179 this year, to Molina’s .239—and, of course, Molina helps his club in a lot of ways that don’t show up on the stat sheet. Jason Heyward has been swinging a hot bat, but the Cubs will play matchups heavily with their relievers in order to neutralize as many of the Cardinals’ threats as possible.

The Cubs’ weakness will come in the form of Hammel—if he fails to perform—and then in the right and left arms of the succession of relievers that will try to nail down the game for Chicago. Look for the Cubs to take this one in a hang-onto-your-hat sort of game, and clinch a spot in the NLCS in the process. These Cubs are loose; they won’t let the moment get too big to them, and if they knock the Cardinals out on Tuesday night, they’ll have the best record of any team left standing. —Rian Watt

After getting blown out in Game Three, the Dodgers will turn to Clayton Kershaw on three days rest to try and keep their season alive.

PECOTA odds of winning: 59% Dodgers, 41% Mets (though without adjusting for Kershaw's short rest)

Injuries/Availability: With the left-handed Matz taking the mound, Yasiel Puig and Justin Ruggiano will likely get their first starts of the series over Andre Ethier and Carl Crawford. Enrique Hernandez has an absurd .429 TAv against lefties in 122 career plate appearance and was getting starts in the leadoff spot down the stretch. Regardless of his spot in the batting order, the Dodgers will hope they can get better defensive play in center field from Hernandez, who took several awkward routes on balls over his head in Game Three. Don Mattingly said after Monday’s game that Yasmani Grandal “pinched something” in his last at-bat. The Dodgers are keeping mum on the specifics, but regardless A.J. Ellis should get the start behind the plate with Kershaw pitching.

After Michael Cuddyer’s shaky performance in the field during Game One, Terry Collins benched the veteran against the left-handed Brett Anderson in Game Three. Getting the start in his place was Juan Lagares, who patrolled center field and pushed Yoenis Cespedes to left field. Lagares had a pair of hard hits to the opposite field during the game, one for a leadoff double in the fourth, and another that found the glove of Hernandez in the right-center gap because of a heavy outfield shift. He should get the nod again in the potential series clincher.

One of the few positive takeaways for the Dodgers on Monday was the ninth-inning rally that freaked out Collins enough to bring in Jeurys Familia for the last three outs in a six-run game. The Mets closer only used 11 pitches and had pitched just once in the previous seven days, so he should available to get three or more outs if needed, but might be limited if six are requested. Bartolo Colon pitched two innings in relief of Matt Harvey in Game Three and will be available again should Steven Matz fail to pitch deep into this game.

Outlook: Prior to Monday’s game, the Dodgers announced that Clayton Kershaw would get the ball in Game Four. We know that in the aggregate, pitchers tend to do worse on short rest but the Dodgers are confident that Kershaw will be able to perform at something close to his ace-like level.

GM Zaidi said #Dodgers studied Kershaw's 2 short-rest starts in past NLDS. "His velocity, his spin rates were all pretty much the same"

This will be the third straight NLDS Game Four that Kershaw has started on short rest. Two years ago, he gave up two runs and scattered three hits over six innings against the Braves before being pulled after 91 pitches. The Dodgers would go on to win the game 4-3 and punch their ticket to the NLCS. Then last October, Kershaw kept the Cardinals off the board until Matt Adams launched a go-ahead three-run on what turned out to be the southpaw’s final pitch of the night. The Dodgers lost by a 3-2 final.

Kershaw was dominant through the first six innings of Game One, striking out 11 and allowing just a solo home run to Daniel Murphy. But the southpaw walked the bases loaded in the seventh before giving way to Pedro Baez, who promptly served up a two-run single to David Wright.

Meanwhile, Steven Matz will get his first start for the Mets since September 24th. The rookie’s NLDS status was up in the air after he developed tightness in his upper back but the Mets felt comfortable enough with his health after an 80-pitch simulated game last Thursday. Matz was impressive during his brief six-start cameo with the big-league club this season, striking out nearly a batter per inning with a solid walk rate and a 94 cFIP. The left-hander brings a mid-90s fastball, a change up with run and good separation, and a big curveball to the table. Additionally, he flashed a handful of sliders during his final two starts, a pitch he could keep in his back pocket for matchups against lefties in Game Four.

Similar to how the Mets held the clear pitching advantage in Game Three, the Dodgers have to feel good about extending the series. Even on the road, PECOTA pegs them as 3-to-2 favorites to send the series back to Los Angeles for a winner-take-all matchup.